Varoufakis: no friend of democracy

His new book sums up the Euro-left’s fear of the people. 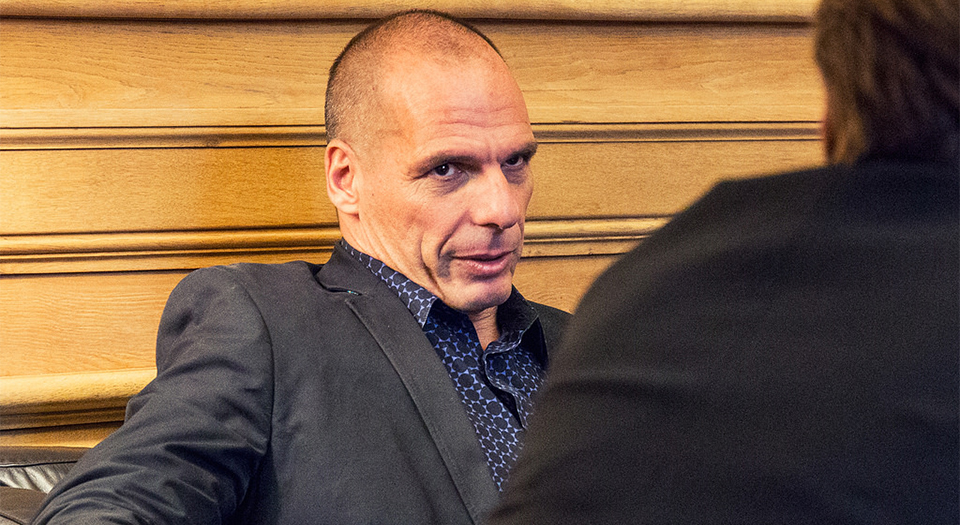 Yanis Varoufakis is one of those infuriating people who says one thing one minute and contradicts it the next. The former Greek finance minister has savaged the European Union for undermining national sovereignty, but he actively campaigns against Brexit. He has censured the EU for being too centralised, but he calls for more integration. And he has condemned the EU’s second-rate technocracy before then proposing his own technocratic plan to ease its economic problems.

His latest book, And The Weak Suffer What They Must?, is plagued by similar inconsistencies. It presents itself as a history of attempts to move towards a common European currency from the 1970s to the outbreak of the Greek financial crisis in 2010. However, it often seems to be more of an attempt to give intellectual kudos to his new role as a campaigning celebrity. Thankfully, the book provides some insights into the many weaknesses and inconsistencies in his worldview.

Before considering his arguments on Brexit, it is only reasonable to examine his account of monetary history. There is of course nothing inherently wrong with writing about the move towards monetary union in Europe, but his account is riddled with analytical flaws. He clearly has more charisma than the average finance minister – not a high benchmark – but he is lacking in intellectual rigour.

Contrary to what might be assumed, there is little on the real economy in Varoufakis’s book. For example, his account of the 1971 ‘Nixon shock’, when the fixed exchange rate between the dollar and other currencies broke down, does not properly explain why it happened. His focus is on the interactions between the politicians and officials involved in the process. There is little understanding of how the US economy’s relative decline meant it no longer had sufficient strength to maintain the dollar peg.

Strangely, Varoufakis puts a heavy emphasis on the Nixon shock to help explain the emergence of the Eurozone crisis in 2009. The thrust of his argument is that those who favoured closer alignment of currencies in Europe should have learned more from the US experience. Those who designed the dollar peg back in the 1940s were, he argues, imbued with the wisdom of Keynesian economics. But however clever they were, there were immense practical problems in imposing a common currency on diverse national economies. Even aligning some of the main European currencies more closely, before the advent of the Euro, proved difficult.

Varoufakis also has a poor understanding of the EU itself. He often talks about the organisation as if it existed as far back as the 1950s, though occasionally, and correctly, he reminds us that it only came into existence following the Maastricht Treaty of 1992. That was when what had been primarily a trading bloc, the European Economic Community, was transformed into an alliance with a much wider political remit.

Strangely, he says little about German reunification. Yet the creation of the EU was in large part a reaction to the emergence of a united Germany at the end of the Cold War: other European countries were intent on building institutions that would help curb German power.

The final key weakness is that a focus on currencies is a poor way to analyse broader questions of democracy and sovereignty. There clearly is some connection, in that the advent of the Euro entailed a severe constraint on the national sovereignty of those countries which joined the monetary bloc. For one thing, interest rates are set by the European Central Bank rather than national central banks. But to understand the EU’s democratic deficit, including for those countries not in the Eurozone, demands a wider canvas.

The main merit of Varoufakis’s book is that, at least inadvertently, it gives some insight into how he manages to square so many circles. Read it carefully and it becomes apparent that his objection is not to technocracy itself, but to ‘second-rate’ or ‘clueless and inefficient’ technocrats. His preference is for what he would presumably class as ‘first-rate’ technocrats: people with Keynesian views similar to his. Indeed, the heroes of the book are Keynesian-inclined politicians and officials of the 1950s and 1960s.

Another striking feature – for what is meant to be a book about currencies – is Varoufakis’s preoccupation with fascism. He mentions the far-right a lot, with numerous references to Nazism, Greece’s Golden Dawn party and France’s Front National. His preoccupation also comes through in his parallel between the 1919 Treaty of Versailles and the Eurozone bailouts. The idea is that the Treaty of Versailles created the basis for the rise of fascism in Europe in the 1920s by imposing tough conditions on Germany, and the punitive Eurozone bailouts, he suggests, could have a similar effect across Europe.

It is this fear of far-right influence that is perhaps the overarching characteristic of his political outlook. It was explicit in the ‘London Declaration’ that was organised by his recently formed Democracy in Europe Movement 2025 and signed by several other leftist luminaries. The nub of its argument is that: ‘Brexit would strengthen nationalism and xenophobia in Britain and across Europe, sowing conflict, strengthening toxic politics and accelerating an economic crisis that will drag all of us down. Being outside the EU will not insulate us from this fate.’

This gets to the crux of the problem with his politics. For all his talk of democracy, he shares the elite’s contempt for the mass of the population. His fear is that if the public is granted too much freedom, then there’s no telling what they might do with it. In the patronising view of Varoufakis and his ilk, there is a high chance that the public’s inherent bigotry would become overwhelming if they were given too much democratic leeway.

Varoufakis’s alternative is essentially an EU run by Keynesian technocrats. Instead of a conservative-dominated EU, his preference is for a supposedly enlightened one, governed by a clique of old leftists and greens. So he achieves the remarkable feat of redefining democracy from government by the people to rule over the public by experts such as himself.

Daniel Ben-Ami is a writer based in London. Visit his website here. An expanded version of)Ferraris for All, his book defending economic prosperity, is available in paperback (Buy this book from Amazon (UK).

And The Weak Suffer What They Must?: Europe, Austerity and the Threat to Global Stability, by Yanis Varoufakis, is published by Bodley Head. (Order this book from Amazon(UK).)