The least that this most radical Suffragette deserves is a statue. 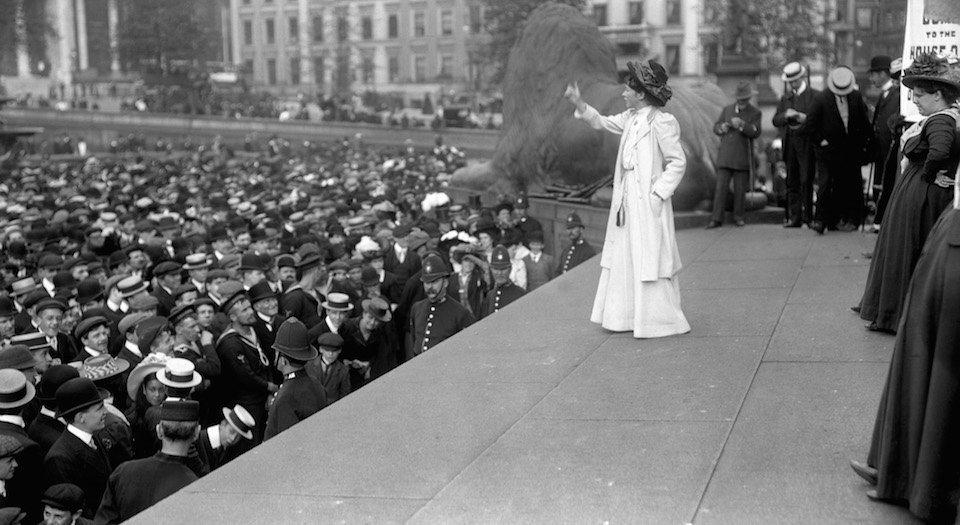 Sylvia Pankhurst was the daughter of Suffragette Emmeline Pankhurst and sister of Christabel Pankhurst, both of whom are memorialised outside the UK Houses of Parliament for their contribution to the fight for ‘votes for women’ in the early 1900s.

Sylvia has not been memorialised outside parliament. And little wonder: she was a thorn in the side of the British establishment, even saying that she wanted to tear down parliament. However, it looks like Sylvia could be about to receive her own statue a few miles east from her mother’s and sister’s, in Islington. This, at least, is the plan of the Trades Union Congress and the City of London Corporation, which are campaigning to erect a statue on Clerkenwell Green to mark the centenary of the Representation of the People Act 1918, which first gave the vote to some women.

The plan to build a statue of Sylvia represents quite a turnaround for her. She has long been seen as the ‘less acceptable face’ of the fight for women’s emancipation. And, as a result, her legacy has tended to be eclipsed by the campaigning efforts of other family members – not that their efforts were insignificant. Her mother, Emmeline, led the Women’s Social and Political Union (WSPU), Britain’s largest militant suffrage organisation in the early 1900s. It succeeded in making the question of female enfranchisement one of the most widely discussed issues in Britain. At this point, Sylvia was in the process of winning a prestigious Royal College of Art scholarship and, in 1904, she moved to London.

As honorary secretary of the London-based national committee of the WSPU, Sylvia spent her time trying to rouse London in support of the WPSU’s aims. By 1906, she was working for the WSPU full time, organising meetings and marches on parliament to demand the vote for women. Most resulted in violent clashes with the police and, for many, imprisonment. Sylvia herself was locked up and force-fed more than any other activist.

Her suffering was a testament to the depth of her commitment to universal suffrage. But this commitment also led to clashes with her mother and sister. The WSPU wanted votes for women on the same basis as men. But, as Sylvia never tired of pointing out, most working-class men still didn’t have the vote at the beginning of the 20th century. The WSPU’s demand therefore excluded many working-class women and men. Both Emmeline and Christabel clearly thought that working-class women would be of little use to the struggle given their lack of status and education.

Sylvia vehemently disagreed. She believed that the suffrage movement required a broader and more popular base, and saw the answer in the East End of London, where she felt ‘a strong, self-reliant movement among working women would be the greatest aid in safeguarding their rights in the day of settlement’. In 1912, with the help of friend and fellow Suffragette Zelie Emerson, she established a WSPU branch in Bow, in east London.

In the run up to the First World War, the wave of strikes dubbed the ‘Great Unrest’ brought Sylvia’s disagreements with the WPSU to a head. After speaking at the Royal Albert Hall in 1913 on a platform alongside James Connolly, an Irish republican leader, to demand the release of trade-union leader James Larkin and in support of locked-out Dublin workers, she was expelled from the WSPU. Within weeks of her expulsion, and with the help of sympathisers from the WSPU, she founded the East London Federation of Suffragettes (ELFS), aimed at organising working women and men in a campaign to win the vote and improve the lives of East End residents.

She launched a weekly paper called The Woman’s Dreadnought (later The Workers’ Dreadnought), which she saw as ‘a medium through which working women, however unlettered, might express themselves, and find their interests defended’. Later, it provided extensive coverage of the Russian Revolution, for which she rallied support in the East End.

Unlike her mother and sister, Sylvia did not see the right to vote as an end in itself. The movement she built in the East End was, according to Sylvia, ‘not merely for votes but towards an egalitarian society – an effort to awaken the women submerged in poverty to struggle for better social conditions and bring them into line with the most advanced sections of the movement of the awakened proletariat’. She had no doubts that the emancipation of working women would be an act of self-emancipation – no group of middle-class women would win freedom on their behalf.

By August 1914, the gulf between Sylvia and Emmeline and Christabel widened dramatically as Britain entered the war. Emmeline and Christabel organised the WSPU behind the British war effort. The WSPU dropped the campaign for the vote, renamed its paper Britannia and took to the streets to hand out white feathers, a symbol of cowardice, to men not wearing uniform. Sylvia disagreed. She saw the war as an imperialist war, fought for material gain of an elite who refused to offer democracy or decent living standards.

Sylvia continued to disagree with her mother and sister throughout the war. So, in January 1918, when the government granted the vote to propertied women over 30, Sylvia was less than impressed. Under the Representation Act, only six million women at most, out of a total of more than 13million, were eligible to vote. As Sylvia saw it, the act failed to break down old class barriers and kept checks in place to impede the will of the majority. Universal enfranchisement for all women and men over 21 was not granted until 1928.

Sylvia’s internationalism, and her understanding that winning formal political equality would require supporting social equality, informed her political activities throughout her life. At a time when the eugenics movement was calling for population control, Sylvia was campaigning for growth and prosperity across society. In an article outlining her vision of socialism, she wrote, ‘Socialism means plenty for all. We do not preach a gospel of want and scarcity, but of abundance… We do not call for limitation of births, for penurious thrift, and self-denial. We call for a great production that will supply all, and more than all the people can consume.’

Regardless of whether Sylvia is memorialised in Clerkenwell Green or even Parliament Square, she needs to be remembered today. But not just as a Pankhurst, or even a Suffragette. Her legacy ought to transcend those two appellations. She was, above all, a radical, an internationalist, and, in her faith in political equality for all, a genuine humanist.

WORLDbytes are screening their latest film on CLR James, Every Cook Can Govern, at Rich Mix on 23 April. Get your tickets here.