After Paris: victory to the Kurds

Why are so few Westerners standing with, or fighting with, the Kurds? 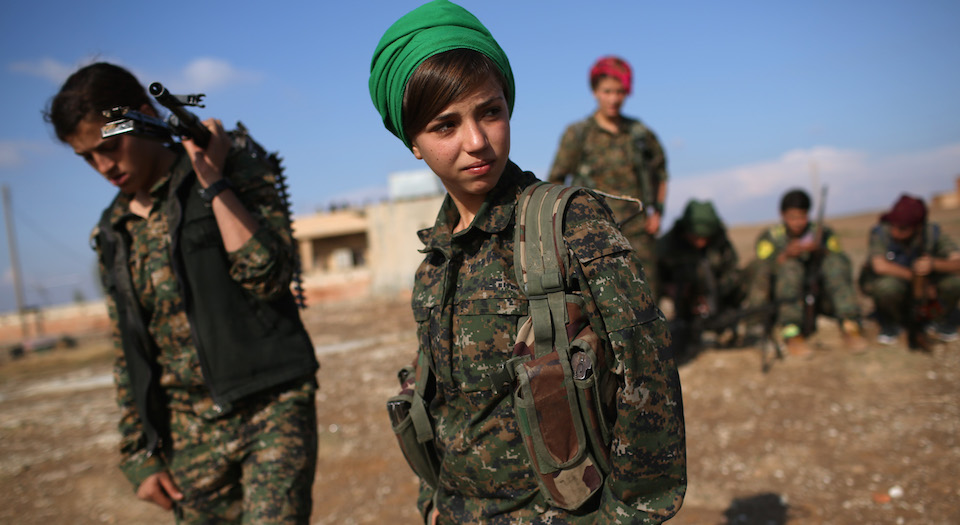 One of the most curious things in politics right now is that everyone is concerned about the spread of the Islamic State yet they seem incapable of offering meaningful support to the one group of people who have managed to stymie that spread: the Kurds.

This oddness is summed up beautifully — or horrendously — in the current G20 gathering in Turkey to discuss how to keep IS militants out of Europe in the wake of the barbarism in Paris. Cameron, Merkel, Obama: various world leaders have gathered in Antalya to denounce the assaults in Paris as an ‘attack on the civilised world’ and to promise ‘global efforts’ to smash IS. And they’re doing this while posing for photos alongside Turkish president and G20 host Recep Tayyip Erdogan, who has okayed airstrikes against the Kurdish forces in Syria and northern Iraq that have shown more commitment to defeating IS than all those leaders put together. Our leaders talk war on IS, while green-lighting war on the most implacable enemies of IS.

The dearth of any true solidarity with the Kurds is striking. Of all the wicked things happening in the world today, the terrorising of the Kurds is up there with the worst, yet there’s little anger, barely any protest.

They’re getting it from all sides. Both from the militaries of NATO allies and from the bombs of unhinged IS militants. As of July, the Turkish airforce has been striking the positions of the Kurdistan Workers’ Party (PKK) in northern Iraq, and has also attacked the Kurdish People’s Protection Units (YPG) in Syria. Just last month, Turkey twice bombed YPG forces in Syria, accusing them of getting too close to the Turkish border as part of their anti-IS training exercises. The YPG, backed by PKK, have done more than any other group to harry and weaken IS. Turkish tanks have shelled Kurdish positions across the border with Syria, injuring both YPG fighters and civilians. On the homefront, the Turkish authorities are severely clamping down on any media outlet that expresses support for Kurdish forces: newspapers and TV channels have been taken over and journalists have been arrested.

When Kurds aren’t being attacked by Turkey, they’re being targeted by IS. From the bombing of a gathering of young Kurdish and Turkish humanists and socialists in Suruc in southern Turkey in July, which killed 30, to the slaughter of 97 people on a pro-Kurdish rally in Ankara in October, the Kurds and their sympathisers have become prime targets of these death cultists. Erdogan has condemned the IS terror attacks inside Turkey, yet many suspect Turkish officialdom has green-lighted, or at the very least turned a blind eye, to some of this barbarism. Certainly these foul attacks complement the anti-Kurdish terror and clampdowns of the Turkish authorities themselves, and seem to have been a key factor in Erdogan’s unexpected victory in the recent national elections.

Western nations have given the green light to Turkey’s terrorising of the Kurds. Yes, the US has provided air cover for Kurdish forces, including last week as Kurdish Peshmerga fought, successfully, to reclaim Sinjar in Iraq from IS. Yet at the same time, the US backs Turkish attempts to weaken Kurdish forces so that, post-IS, they do not have too much power, or their own state.

The beginning of Turkish airstrikes on the Kurds in July followed months of negotiations with Washington, during which, in the words of political scientist Mehmet Ali Tugtan, the US agreed to ‘tolerate’ the strikes, ‘[in return] for continuing Turkish cooperation against IS’. What’s more, in the words of the Wall Street Journal, the US has worked with Turkey to ‘contain Kurdish territorial ambitions’. For example, the US refuses to ‘let YPG forces move west of the Euphrates River into the area in which Turkey hopes to create a safe zone’. This is the area in which Turkey recently bombed YPG forces, no doubt assuming the authority to do so through Washington’s backing of the idea that it must remain a Kurd-free area. The US is also, so far, heeding Turkey’s calls that as few arms as possible should be given to the Kurds. In October, the US dropped 50 tonnes of ammunition and supplies in northern Syria, but these were for ‘Arab fighters… [and] the Pentagon said that none of the equipment had been given to Kurdish forces’. (Dropping masses of weapons into Syria — what could go wrong?)

So even as the US provides air support for Kurdish forces, and praises their pluck, it still works with the Turks to ensure that they remain in check, relatively weak, and will not get what they fundamentally want: a meaningful Kurdish state. This should be a reminder of the long history of Western forces using the Kurds but then betraying them later.

It should be obvious why the West is incapable of offering serious support to the Kurds against IS: because our governments elevate the short-term need to preserve their alliances and keep NATO relatively stable over the bigger, moral goal of tackling an Islamist outfit that presents itself as the West’s greatest political, existential foe. Such is the disarray of Western leaders, so narrow has their worldview become, that they focus more on the day-to-day stability of their own offices and their connections than on sending serious military force to defeat an enemy which has conquered large parts of Iraq and Syria and now is launching attacks in the West. The iPad imperialists currently calling on Western military forces to sort out the Islamic State should bear this short-termism and duplicity in mind, and ask whether the involvement of yet more military forces driven by a vast array of narrow interests will really benefit the peoples of Syria and Iraq or further complicate and brutalise the conflicts around them.

But if it’s obvious why the West can’t or won’t fully support the Kurdish people, it’s less clear why Western radicals and progressives are saying so little about the terrorising of the Kurds. Where are the protests? In recent months, there have been large gatherings to express sympathy with the Palestinians (with some even describing the recent anti-Israeli stabbing sprees as a ‘knife intifada’). But there have been few marches against Turkey’s terrorising of the Kurdish people or in support of the Kurds’ war on IS.

Some elements on the Western left explicitly refuse to support the Kurds. Last year, Britain’s National Union of Students voted down a motion to ‘condemn the IS and support Kurdish forces fighting against it’, on the basis that it was Islamophobic. The students’ union at University College London recently No Platformed a former student who had spent five months fighting alongside the Kurds, on the basis that his talk might have led to ‘others going and fighting in the conflict’. Meanwhile, supposedly progressive pro-interventionists, the laptop bombardiers of the press who are so concerned about IS and its poisonous influence, rarely focus on the Kurds, far less offer to put their money where their mouths are and join the Kurds against IS. Instead they obsess over Russia’s role in Syria and the need of the West to counter it with a clear military strategy in the whole Middle East region.

The dearth of solidarity with the Kurds among Western progressives ultimately speaks to the baleful influence of the politics of victimhood. Today, Western leftists, of both the anti-war and pro-war variety, engage with international issues entirely from an autonomy-denying, victim-driven perspective. On the ostensibly anti-war side, especially among leftists obsessed with Israel, the focus is always on the patheticness of foreign peoples, and the importance of having the UN or some other global body, madly considered to be neutral, to save and assist them. The language speaks for itself: ‘Save Darfur’, ‘Save Gaza’, they cry, presenting these peoples, most notably the Palestinians, as infants, effectively, requiring a powerful alliance of well-educated, white Westerners to provide for their every political and therapeutic need. Meanwhile, pro-war progressives, the misnamed ‘humanitarian interventionists’, continually play up the incapacity of foreign peoples, their inability to tackle tyranny or create new states, and demand that powerful Western militaries ‘liberate’ them. They have contributed to the reduction of the tough, conflictual world of international affairs to a kind of global school playground, featuring bullies (tyrants), victims (the latest pet group they have adopted), and teachers — us, the wise West, whose militarism is a disciplining, correcting force.

In this climate in which everything is understood through the late 20th-century victim culture, the Kurds make little sense. For here we have a people who do not advertise their weakness in the hope that Western activists will adopt and publicly pity them, or see weepy speeches at the UN as the answer to their every problem. No, these are people who want arms, who want to create a new nation, who are optimistic and strong (and divided, yes; that can be dealt with later). They don’t want to be empowered by outsiders; they want self-determination, the precise opposite, which requires autonomy and resilience, not therapy. What’s more, their women do not need media feminists or a First Lady to fight their corner in global gatherings; they fight for themselves, alongside men. And all of this currently makes the Kurds alien to our political culture that has disavowed both the idea of the free-willed individual and the notion of a people creating a popular, democratic nation through the very act of fighting for it; of liberating themselves rather than being phonily liberated by outsiders.

This is the Kurds’ great tragedy: they aren’t strong enough to defeat IS on their own, but they are too strong to win the backing of Westerners who now think entirely in terms of victims they might virtue-signal their concern for rather than peoples whose autonomous aspirations they might back and offer solidarity to. The Kurds are not only an explicit threat to Turkey and IS; they’re also an implicit threat to the outlook now adopted by many in the West. And that is why we should support them: because they’re aspirational, because they want to destroy the Islamic State, and because they might also help to destroy, or at least turn on its head, the hyper-moralism and self-obsession of contemporary Western observers and activists.