The degradation of the right to petition

A once noble tradition is now used for illiberal ends. 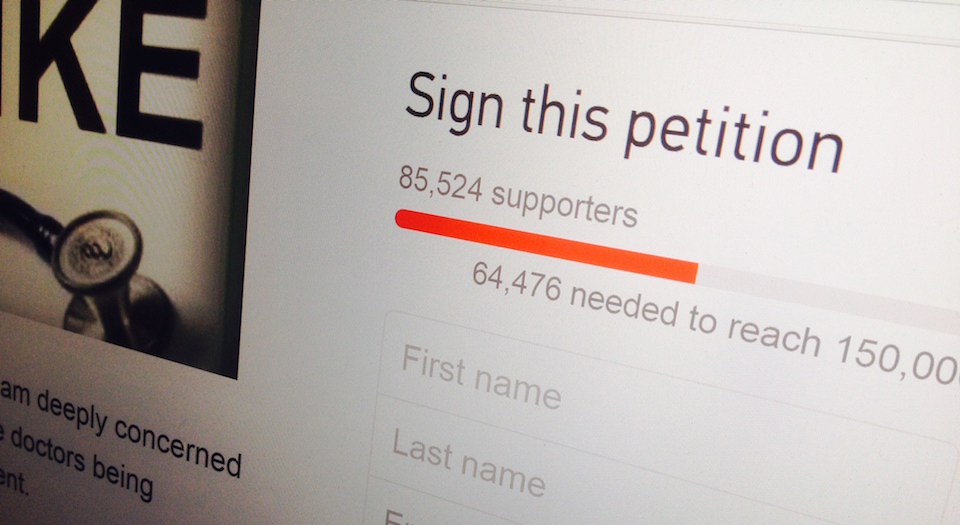 Ahead of our First Amendment conference in Washington DC, Tim Black looks at a once vital means of protest.

Thanks to online platforms, complete with auto-fill data-entry fields, and big digital buttons, the world-shaking force of the petition has been reborn. Change.org, 38 Degrees, and Avaaza, to name only the most well-known facilitators of get-online-and-do-something digital activism, have all helped to reinvigorate political life through the power of the online petition. The figures speak for themselves: over six million people from the UK have signed or started a Change.org petition since the website launched in 2012; over three million people from the UK are members of 38 Degrees; and over 1,500 Change.org petitions are launched each month.

The world’s leaders are keen to listen, too. Hence the governments of the UK and the US, and even the bureaucrats at the EU, have established their own online petitions services. That ancient right, ‘to petition the Government for a redress of grievances’ as the First Amendment puts it, has been revived for the 21st century to world-changing effect.

That at least is the digital activists’ narrative. But in the course of its revival, petitioning has changed in form and function. What was once a vital means of subjecting those in power, no matter how vainly, to the interests and wishes of a section of the people has become a means of subjecting sections of the public to the wishes and interests of other sections of the public. A tool of liberty has turned into its opposite. It has become a weapon of the illiberal, a way of soliciting the power of the authorities to prohibit this, ban that, or condemn him or her.

It wasn’t always this way. From its pre-Magna Carta origins, through the English Civil War and the American Revolution, and later still, through the Chartist movement and the Dreyfusards, up until universal suffrage and mass-party democracy, the petition was one of the most important mechanisms available for subjects to air their grievances and demands before a civil authority, be it the monarch, or, later, a decidedly unrepresentative parliament.

In its pre-Civil War form, the petitions provided those without power the ability to exert some influence over their rulers. Petitions allowed for commoners to request a change to the price of foodstuffs, or to call to account the behaviour of royal officers, or to urge a reduction in corn tariffs. The petition’s tripartite form reflected its hierarchy-reinforcing function. It was addressed to an authority, mainly the monarch; it stated a grievance; and, crucially, it prayed for relief. In a semi-feudal society, the petition was the principal means by which the ruled corrected, or attempted to correct, the course of the rulers – by praying to the powers-that-be for relief.

As parliament’s struggle with monarchical authority developed during the seventeenth century, so petitions acquired an ever-more explosive aspect. They often constituted parliament’s entire agenda, as the voice of the commons against the king. But for radicals like the Levellers, affirming the potential of petitions, as the ‘right to petition against things established by law’, also exposed the limits of petitions. As a troop of Roundheads put it in 1648, parliament could simply ‘reject and slight the just directions and petitions of the people…’. So, just as the democratic instinct bloomed in petitioning (and pamphleteering) form, so it was stymied, too, by the nature of the petition. The importance of petitioning was also an index of petitioners’ ultimate powerlessness, their dependence on the whims and decisions of others.

The American colonists were immersed in this petitioning tradition. The right to petition, enshrined in countless local assemblies, was the most potent means available to the colonists to represent their interests to their English rulers. And this sense of petitioning’s importance writes its way into the First Amendment, as the crowning last-clause glory of individual liberty.

But what’s interesting is that the importance of petitioning decreases as individuals’ liberty increases. That is, as more representative, democratic forms of government emerged from the great struggles of the late eighteenth and nineteenth centuries, so petitioning becomes less central, less vital. It’s still important, of course, but it’s important to those struggling for enfranchisement, to those without access to governance. Hence, the right to petition was important, for instance, to the Chartists in England, and to free blacks in the US – to those, that is, who were yet to enjoy the benefits of the emerging liberal polity.

But from the perspective of the committed democrat, fired up by the American and French Revolutions, petitioning was something of a sop, a consolation for those to whom the freedoms of the liberal polity had been denied. Hence Thomas Paine, in Rights of Man, slammed the paltry settlement of England’s 1689 Bill of Rights in the following terms: ‘What is [the Bill of Rights] but a bargain, which the parts of government made with each other to divide powers, profits and privileges? You shall have so much, and I will have the rest; and with respect to the nation, it said, for your share, You shall have the right of petitioning. This being the case, the Bill of Rights is more properly a bill of wrongs, and of insult.’

By the early twentieth century, the petition was increasingly seen as an obsolete form of political participation. In 1901, The Times referred to it as having only ‘sentimental value’. While that was an exaggeration, there was little doubt that the right to petition had lost much of its lustre. The struggle for universal suffrage and political challenges to the established powers were to the fore, not hierarchy-respecting petitions.

So what does that tell us about the nature of petitioning’s revival in the 21st century? It’s still called petitioning, of course, but, in a liberal polity practising formal democracy, its role has changed. Yes, there are petitions that recall that older tradition of seeking redress for particular grievances, such as the half-a-million-signed petition in 2011 that asked the UK government to reverse its decision to sell off England’s publicly owned forests. But that is an exception. More often than not, in the context of a liberal, democratic political system, the petition is being used to circumvent the democratic rights and liberties of citizens. It has become an illiberal force, a means for self-selecting cliques to ask the authorities to do something about other citizens, or to pressure individuals or companies into some illiberal course of action.

Some of them are trivial, such as the petition to make Beyoncé and Jay-Z comb their daughter’s hair. Or the petition to ‘discourage rags on head in nativity plays’ because they are a sign of ‘creeping Sharia law’. Or the petition demanding ‘No taxpayer funding for “Margaret Thatcher Memorial Museum and Library’”. But many are seriously directed at other individuals’ liberty, such as the petition last year calling for Joan Rivers’ comedy gigs to be cancelled in the UK on account of her pro-Israel views, or the petition this week calling on a student nightclub to change its name from ‘P.U.L.L’ because of ‘the expectations it creates’ for clubbers.

Petitions are no longer a way for subjects to air their criticisms of rulers. They’re a license for the censorious to call for the banning and prohibition of things and people they don’t like. They are a vehicle not for subjects to air their grievances, but for citizens to vent their prejudices. ‘How can anyone deny the world-changing power of online activism now?’, shouted a supporter of online petitions last year. And what did she claim digital campaigning had achieved? Had it overturned a particularly nasty piece of legislation, or reversed an especially restrictive new policy? Nope. It’s two crowning achievements were: getting a comedian’s TV show cancelled; and stopping an American pick-up artist from giving some talks in the UK.

And what’s more, the 21st-century petition, in all its illiberal, conformity-inducing glory, requires so little effort, beyond the click of a mouse, on the part of signatories. While illiberal cliques might be digitally active, drawing up petitions and emailing them out, the vast majority backing calls to censor a comedian, or sack a columnist, are digitally passive. As one critic notes, ‘to inflate participation rates, these organisations increasingly ask less and less of their members. The end result is the degradation of activism into a series of petition drives that capitalise on current events.’

A passive force of illiberalism. That’s the petition in the 21st century. A once vital means for subjects to protest against their rulers is now a vicious, citizen-on-citizen parody of itself.