The real victor in the Greek elections was the Troika’s bureaucratic fatalism. 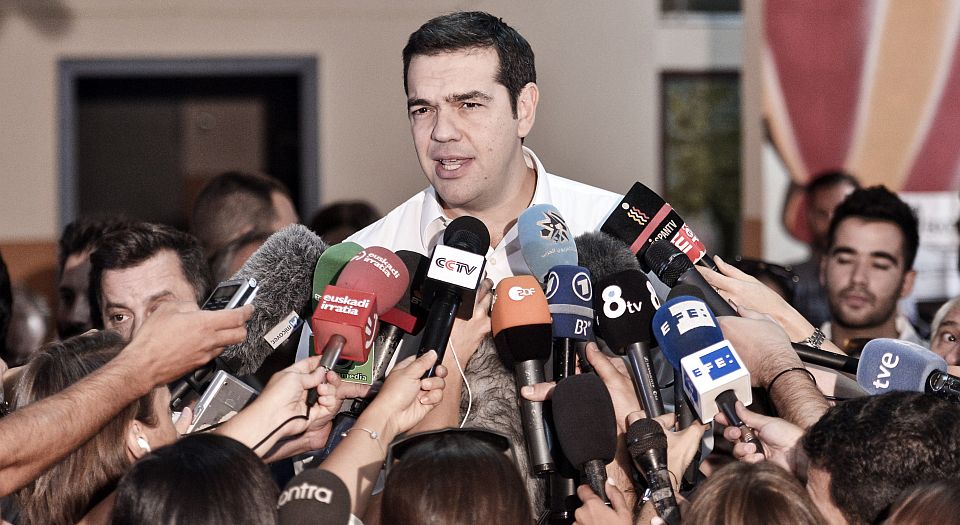 There Is No Alternative. That was the refrain that ran through the Greek General Election. Either accept the IMF, the European Commission and the European Central Bank’s austerity-laced memorandum of understanding, which outlines what the Greek state has to do if it’s to keep receiving the bailout cash, or… nothing. No cash, no Eurozone, no future.

The refrain could be heard in the face-saving rhetoric of Syriza, the victor in the election with 35 per cent of the vote. This was the party that won an election nine months ago on the basis that it was going to challenge the Troika, oppose austerity, and remain in the Eurozone. It was going to have its cake and eat it. Less than a year later, and Syriza, with leader and prime minister Alexis Tsipras still at the helm, has accepted that all that anti-austerity guff, all that grandstanding against the Troika, was just that: grandstanding and guff. There only ever was one way forward: that prescribed by the Troika. And so Tsipras has won a second election not as leader of a party promising an alternative to the Eurozone’s harsh, recession-inducing regime of austerity, but as leader of a party that has embraced it, as the one and true path.

If Tsipras sung TINA with a note of melancholy, and a nod towards Greeks’ ‘dignity’, the EU’s leaders belted it out with gusto. So as news of Tsipras’s win came through, EU official Margaritis Schinas said, ‘There is a lot of work ahead and no time to lose’. The EU’s economics chief, Pierre Moscovici, tweeted: ‘Confident in future of #Greece. Three quarters of voters support eco & social reforms. Looking fwd 2 start work swiftly w new gvt @tsipras_eu @EU_Commission.’ And Donald Tusk, president of the European Council, struck a less enthusiastic, but still determined, note. ‘I hope that the elections will now provide for the political stability necessary to face all the challenges at hand.’

For the EU’s retinue of technocrats, TINA appears as a belief in getting on with what has to be done. Elections, indeed democracy, are a distraction, at best a way to get the electorate to ‘buy in’ to the inevitable, and, at worst, a way to delay it. Hence Tusk’s ‘hope’ that elections will allow Greece to start doing what it has to. There is no question of political alternatives here, no sense that there might be another way forward. There are just things that have to be done – targets to be met, reviews to be passed, rules to be adhered to.

But then that is the nature of EU governance. It is rule-based and regulation-heavy; it is a form of governing, a way of ruling, in the absence of politics. Citizens are paid lip service, but reluctantly, and only as a means to lend a democratic sheen to what is a technocratic machine. So Tsipras and Syriza might have been elected, but their power is circumscribed by the demands of the Troika. The wording of the memorandum of understanding that came with the July bailout is telling: ‘The government commits to consult and agree with the European Commission, the European Central Bank and the International Monetary Fund on all actions relevant for the achievement of the objectives of the memorandum of understanding… Success will require the sustained implementation of agreed policies over many years.’ In other words, the Greek government has to do what the terms and conditions of the bailout demand. This means that in the coming months, some 120 pieces of legislation have to be passed, with future bailout monies dependent on passing the EU’s quarterly reviews. So, regardless of what either Syriza or the Greek people want, the government will have to, among other things, revamp early retirement pension schemes, implement tax reforms (including doubling income tax for farmers), sell off over half of the electricity network, and reform the labour market.

And if Tsipras and friends are struggling to follow the Troika’s roadmap for Greece’s future, the EU has drafted in a team of crack bureaucrats to help. According to the financial weekly Agora, this 20-strong taskforce from the European Commission’s Structural Reform Support Service, led by a Brussels-based Dutch economist, ‘will essentially write the legislation for almost all areas of government policy, from corporate income tax and labour-market policy to the health and welfare system… and prepare interim reports during the evaluation of the economy’.

The bureaucratic fatalism of the EU and political patsies like Syriza has clearly affected the Greek electorate. ‘What election?’ quipped an Athens kiosk-owner to a Guardian reporter. ‘Nobody cares because the feeling is they are all the same, they all tell lies, so what’s the difference?’ Elsewhere, a bank worker said, ‘It doesn’t matter who wins, we know what they’ll be doing. More taxes, more cuts, more austerity. Every party signed up to it. There’s no real point voting.’ Little wonder, then, that nearly 44 per cent of Greeks didn’t vote at the weekend, the highest abstention rate in decades. And of those that did vote, nearly 70 per cent voted for pro-memorandum parties, such was the air of resignation.

Some, such as Tsipras’s former right-hand man, Yanis Varoufakis, have criticised Syriza’s cave-in to the Troika. But many observers have presented it, and even praised it, as ‘realism’. In January, Syriza may have proffered alternatives to austerity, runs the argument, but it has grown up now; it knows how things stand. There is only one realistic way forward, and that’s the way of the Troika. This is TINA’s call: embrace realism and forget political ideologies. But realism is itself an ideology; it is the ideology of the status quo, a willing acceptance of things as they are. But there is always an alternative. There is always a possibility. It’s just that to glimpse that alternative, one has to think outside the Eurozone, and reject the so-called European project. That was something Syriza and Tsipras, to their eternal discredit, were never really able to do.