Don’t make a moral melodrama out of the migrant crisis

This outburst of political compassion is not as healthy as some imagine. 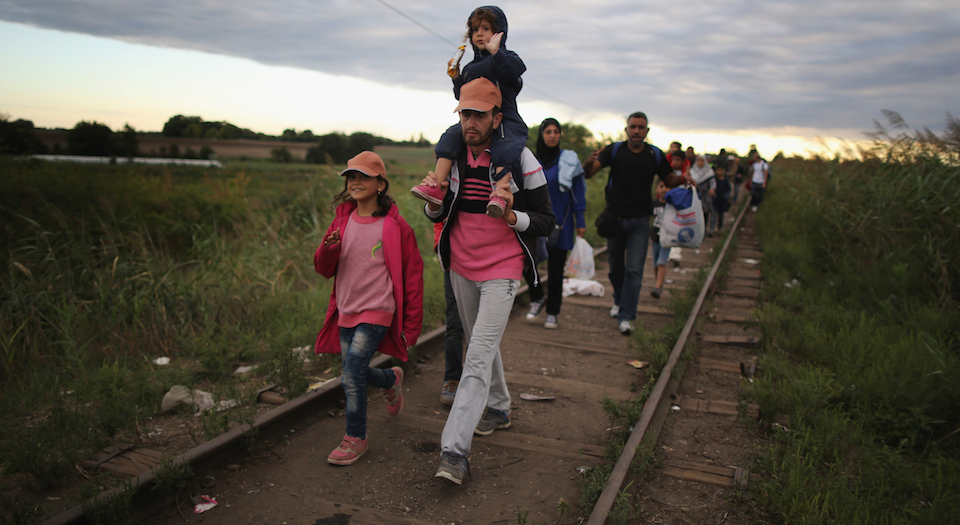 Spiked has long been at the forefront of calling for a generous, liberal approach to migration. Our take is that there should be as few restrictions as possible on the movement of people across borders as they search for stability or work, and the makings of a new life. However, we won’t be getting behind the hyper-moralism of the pitying political narrative around the refugees arriving from Syria. This media-orchestrated moral drama, complete with invasive photos of dead children, highly inappropriate comparisons with the Holocaust, and the performative piety of politicians and the Twitterati holding up pro-refugee placards or promising to open their homes to migrants, confirms that what ought to be a democratic discussion — the question of what caused this crisis and where refugees should go — has been reduced to an opportunity for virtue-advertising in which rational thought and public engagement are positively frowned upon.

The most striking thing about the outburst of ostentatious concern for the refugees is its bad faith. What is presented to us as a sad humanitarian disaster that somehow materialised over the past seven days is in fact traceable to the disintegration of the Middle East over the past five years and the hollowing-out of 50 years worth of state structures in Libya and the knock-on destabilising effect that had across north Africa — globe-shaking events which our governments in the West played no small part in bringing about. The same governments whose officials now make sad-eyed promises to take in a Syrian orphan or provide clothes to victims of this allegedly sudden humanitarian upheaval. The hyper-moralism of the sad-for-refugees narrative wrenches this large-scale movement of people from its political, global context, meaning even some of the contributing authors to the exodus from Syria (Western governments), and those who have traditionally been cagey about migration (the Labour Party, tabloids, trade unions), can assume the role of humanitarian saviours. The bad-faith depiction of this swell of humanity as a kind of politics-free natural disaster, or something whose origins lie entirely Over There, means it can be casually moralised, turned into a platform for posturing by the concerned classes.

Such moral preening is now widespread. Indeed, the value of the refugees seems to lie in the extent to which, through playing dutiful humanitarian victims, they might help Western politicians assume the role of smiling saviour and in the process repair their flagging moral authority. It’s well known that sections of the hard right have a tendency to dehumanise asylum seekers, treating the complex human beings who cross borders as an amorphous threat. Over the past week we have seen that the other side in this discussion, those who pose as friends of migrants, also play the dehumanisation game. Where the right criminalises migrants, liberals infantilise them, reducing them from moral agents who have made a decision to migrate to childlike victims in need of rescue by virtuous Westerners. The much-shared, wept-over photo of three-year-old Aylan Kurdi spoke to the new Western view of the migrant: as hapless, helpless; pathetic; children requiring our care. The hard right juxtaposes itself to the threatening migrant; the pseudo-humanitarian left presents itself as lifesaver to the childish migrant. Both sides dehumanise them, for self-serving reasons.

European elites’ exploitation of this political crisis repackaged as a humanitarian problem has been swift. Politicians publicly signal their virtue by promising to open their homes to refugees. Yvette Cooper, who is aspiring to lead a party that campaigns for tougher immigration controls, says she would house a Syrian family. So does Nicola Sturgeon, who has never once let a bandwagon pass her by. Bob Geldof and other celebs have also offered to house refugees. Of course they don’t say how long they would do this for. (A year? Three? And would they provide the families with meals and money?) But then, this isn’t about practicalities: it is performative, designed to draw attention to one’s own decency rather than to housing shortages and other issues. Meanwhile the Twitterati take photos of themselves looking earnest as they hold up bits of paper saying ‘Refugees Welcome’, and everyone tweets and retweets the photo of Aylan’s corpse to show how sensitive they are. Where the refugees are assigned the role of helpless moral casualties in this media-fuelled melodrama, observers assign themselves a starring role as good, upstanding possessors of virtue.

The media have played a key role in constructing this humanitarian drama that so flatters Western Europe. Newspapers splash dead Aylan on their font pages. They hint darkly at Holocaust-like scenes in Eastern Europe, where the refugees first arrive. Every time a Hungarian in uniform puts a refugee on a train, there are whispers about a return to a ‘darker period in European history’. Others call for a new Kindertransport to get Syrian children through Eastern Europe and into the West so that they can be cared for by Sturgeon and Geldof. These historical comparisons are unseemly. The Syrian refugee crisis is unique to our times and has nothing in common with the extermination of Europe’s Jews. However, when it comes to orchestrating a morality tale to benefit a morally confused Europe, it seems history can be casually plundered, its imagery and crimes exploited by those in desperate need of a political adrenaline shot today.

It isn’t only virtue signalling we’re witnessing; it’s moral differentiation, the creation of a new dividing line between those who care about refugees (Us) and those who don’t (Them). The migrants are being marshalled to the culture wars by European observers keen to distance themselves from sections of their own societies. This is why observers talk ominously of the problem of ‘public attitudes’, by which they mean the racism, as they see it, of the masses. Why Yvette Cooper calls on the political class to avoid giving into ‘the politics of fear’ promoted by sections of the media. Why EU officials warn against the use of inflammatory rhetoric. Because in their eyes, there are good, humanitarian people who are willing to welcome refugees, and bad, fearful, isolationist people who pose a threat to refugees. They have turned refugee-friendliness into the new moral litmus test, separating the well-informed from the public and its bad ‘attitudes’.

The refugee crisis is also being used to resuscitate the moral divide between civilised Western Europe and allegedly backward Eastern Europe. The Guardian calls on Brussels to ‘counter and denounce’ Hungary for its refusal to treat refugees fairly, warning that Hungary’s anti-refugee stance ‘enjoys support among other central European governments’. The attitudes of these nations are ‘a disgrace’. Both within individual nations and across the EU, the refugee crisis has been turned into an opportunity for moral differentiation. Increasingly, being ‘pro-migrant’ is a cynical means of advertising one’s own probity through handwringing over the attitudes of one’s own native masses and the ‘disgraceful’ policies of bovine Eastern nations. Thus are migrants made into fodder for a culture war.

Most depressingly of all, the new narrative is explicitly about evading public engagement on this issue. A democratic discussion is the last thing Euro-officials want. But if Europe is to be turned into the new home for dispersed humanity, with hundreds of thousands coming here, surely publics should get to discuss it first? Seems not. After all, ‘public attitudes’ are bad. And so we have Angela Merkel, Francois Hollande and EU officials devising quotas for each EU nation, effectively instructing us on how many refugees we must take. This highly undemocratic solution to the refugee crisis shows how utterly distrusted European publics are. Indeed, through the refugee crisis EU officials are seeking to recover their moral authority, which was called into question during the Greek financial crisis of recent months, particularly their authority to impose on nations, and their publics, preordained political set-ups. The pseudo ‘open borders’ approach among European officials is not a genuinely liberal sentiment; it is the latest expression of the EU’s long-term project of weakening national and popular sovereignty and concentrating decision-making on important political matters in the hands of elites, far from ‘public attitudes’.

spiked is about as open borders as you can get. But in Europe right now, there is a bigger problem than border control, and that is the cynical weakening of national borders, and of the popular sovereignty within those national borders, by an EU oligarchy not remotely interested in freedom and autonomy but rather determined to water down democracy itself in the name of allowing small cliques to set quotas, write regulations and determine national destinies. Here is the great tragedy of the refugee crisis: it’s being used to dilute democracy further. And we need democracy so that we might make a real case for freedom of movement, to the public, and win the argument in a meaningful, lasting, liberty-boosting way.