In Britain in 2015 you can be jailed for singing a song. Where’s the anger? 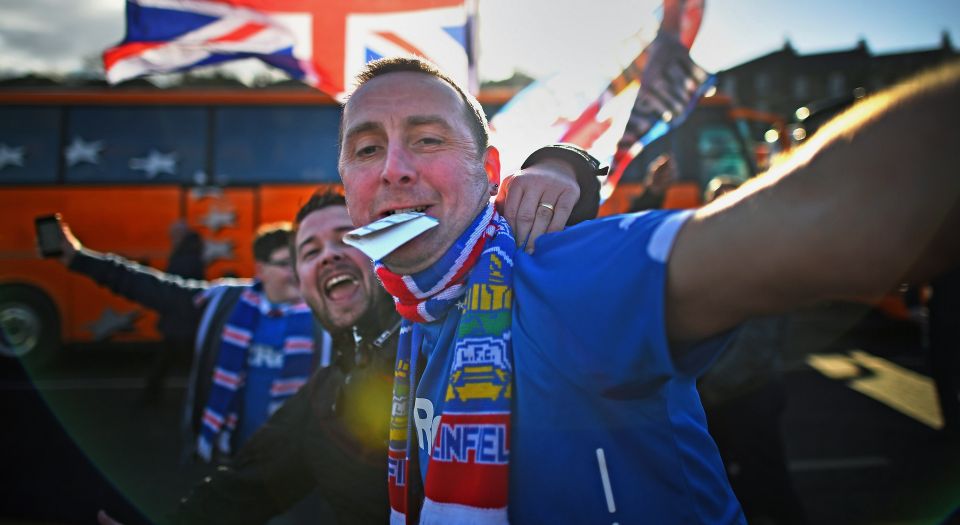 Imagine living in a nation so authoritarian you could be locked up simply for singing a song that the authorities disapproved of. Well, if you’re one of spiked’s many UK-based readers, you don’t have to imagine it – you already live there. Last week in Glasgow, a man was sentenced to four months in jail for the crime of singing a state-decreed ‘offensive song’. Yes, that thing us Brits love to be sniffy about when it’s done by the Saudis or Putin – the cruel or unusual punishment of people just for saying something or singing something – is now being done right here in the UK, in the twenty-first century.

The man in question is Scott Lamont, a 24-year-old fan of Rangers FC, which draws most of its support from Scotland’s Protestant communities. It has an infamous rivalry with Glasgow’s other globally recognisable football team, Celtic FC, most of whose fans come from Scotland’s Catholic, Irish-tinged communities. On 1 February, when Rangers were playing Celtic at Hampden Park, Lamont sang one of the fanbase’s favourite songs as he walked along a street to the game. The song was ‘The Billy Boys’, an old sectarian loyalist ditty first sung by Glasgow’s razor gangs in the early twentieth century and later adopted by Rangers fans as a way of riling their Celtic rivals. The song starts ‘Hello, hello, we are the Billy Boys’, and contains the line ‘We’re up to our knees in Fenian blood’.

Simply for singing this lewd tune which for decades has formed part of the stadium-based, mostly harmless wind-ups between Rangers and Celtic fans, Lamont was jailed for four months. The sheriff who jailed him said he did so because ‘a message has to be sent to those people who would choose to ruin football’: ‘This sort of behaviour will not be tolerated.’ So not only was Lamont deprived of his liberty for committing songcrimes — he was also turned into a sacrificial national advert of what will become of anyone who mis-sings or utters something the authorities consider offensive. This was a showtrial, designed not merely to resolve a ‘crime’ (some crime!) but to ‘send a message’ to all Brits, especially that throng of uncouth Scottish football fans, about what it is acceptable to think, say and sing. And then the sheriff had the nerve to say Lamont ‘let Glasgow down’. It wasn’t Lamont who temporarily turned Glasgow into a Taliban-style statelet banging people up for singing.

How can judges in Scotland behave so tyrannically? Because of the Offensive Behaviour at Football Act, a repugnant law passed by the Scottish National Party in 2012. This act gives the authorities carte blanche to punish severely any football fan who says something they don’t like. It outlaws sectarian chanting, singing and behaviour at football games, and also on the way to games or in pubs in which games are being shown. It criminalises the ‘expression [of] religious hatred’, wiping out, in one foul swoop, the traditional songs and chants of Rangers and Celtic, who have long mocked each other with scurrilous words. To this end, Celtic fans have been arrested, some in dawn raids, for singing pro-IRA songs, Rangers fans have been had up for loyalist chanting, and SNP officials have warned that even singing ‘Rule, Britannia!’ can potentially be a crime, ‘depending on the circumstances’. In what circumstances could singing a patriotic song beloved of the British Navy land you in court? When you’re a lowlife football fan who’s singing it, in that alleged hotbed of hatred and volatility that is a football stadium.

The focus on ‘circumstances’ cuts to the rotten heart of this law. What it means is that football fans, especially Celtic and Rangers ones, can be punished for things others are still allowed to do. Because they’re presumed to be a lesser breed of human, not as rational as the rest of us, they can be prevented from singing silly or offensive songs and even from blessing themselves. Seriously. An SNP leader has warned that Celtic fans who ‘bless themselves in an aggressive manner’ face arrest. This dread of the ‘circumstances’, which is really a dread of the mostly working-class men who make up the teeming crowds at Scotland’s football games, was revealed in the words of the sheriff who imprisoned Lamont for songcrimes: he said Lamont’s singing was ‘inflammatory’ and ‘could have led to horrendous violence’. This reveals more about officials’ prejudiced mindset than it does about any real threat of football violence: they view fans as animals, basically, liable to be warped upon hearing certain words or orders, easily goaded to violence by the noises around them. This censorship, like so much censorship, is fuelled by an elitist fear of the blob and its unpredictability. But the only ‘circumstances’ that matter are these: a football stadium is not real life. In that heated and, yes, fun moment of footballing rivalry, people shout and sing stuff they would never shout or sing in a Tesco’s on a Wednesday afternoon — and they must be free to do so.

The Lamont case shows how twisted the category of ‘incitement’ has become. There’s nothing inciting about ‘The Billy Boys’. It doesn’t instruct anyone to kill ‘Fenians’, far less offer advice on how to do so; it simply makes colourful reference to long-gone clashes between Protestant and Catholic gangs. These days, those who brand certain words or images as ‘inciting’ really mean that they find them super-offensive. Well, tough. They are also passing explicit judgement on the audiences to the things they don’t like. The idea that a Rangers song could incite ‘horrendous violence’, or that Page 3 inflames ‘rape culture’, or that a Dapper Laughs gig could cause sexual assaults, is really a way of saying that the people who consume this stuff have less control than those who don’t; they’re mentally inferior to people who don’t watch football games or read the Sun or chortle at laddish comics. As with all censorship, the Offensive Behaviour at Football Act creates a stark, elitist divide between those who cannot be trusted to speak or sing freely — Them — and those who are so in-the-know that they must be charged with controlling public discourse — Us.

And so in Britain in 2015, on the 800th anniversary of Magna Carta, with our leaders crowing about Britain’s great traditions of freedom, a man has been jailed for singing a song. Where is Amnesty, currently fighting to have a Saudi blogger released from jail but silent on Scott Lamont? Where’s Liberty? Index on Censorship? These self-styled warriors for free speech are happy to defend the rights of Russian punks or Belarusian playwrights but not Scottish football fans. That’s because, to them, a Rangers supporter — a working bloke with a foul mouth — is far more foreign, far more difficult to comprehend, than any overseas writer or Guardian-approved pussy punk band. They won’t say it, but the rest of us should, regardless of whether we like the lyrics or not: ‘Je Suis Billy Boy. Free Scott Lamont.’