An ominous pilgrimage to Syria: what made them go? 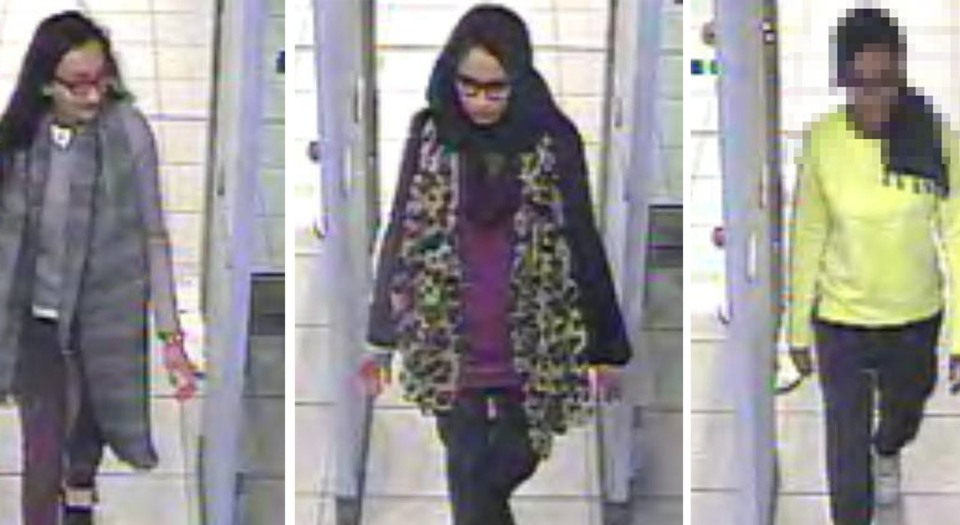 So, who are the three young Muslim girls from East London who have decided to embark on a hazardous journey to Syria to join the growing ex-pat community of jihadists?

There is little doubt that Kadiza Sultana, 16, Shamima Begum, 15, and Amira Abase, 15, are clever and unusually resourceful teenagers, who almost effortlessly managed to get around all the obstacles that stood in the way of their getting to Turkey. Reports indicate that they are smart, ‘straight A’ pupils, and by all accounts they had a bright future ahead of them. And yet they decided to abandon their GCSE courses and their families to embrace a way of life that their own society considers to be vicious and malevolent.

That three young teenagers have come to the conclusion that the destructive cause of the Islamic State is preferable to the British way of life is bad enough. But what’s even worse are the banal, hackneyed and trite explanations being offered by officials and the media to account for the girls’ actions.

British society has become so wedded to the project of infantilising young people that it interprets everything they do through the prism of child protection. Just count the number of times these intelligent, resourceful teenage girls have been described as ‘vulnerable’. Adopting a metaphor usually associated with paedophilia, media reports assert that these so-called jihadi brides were ‘ruthlessly groomed online’ and ‘brainwashed in their bedrooms’. This attempt to make sense of the attraction of the jihadist subculture through the narrative of child protection is not confined to the media. Since the beginning of the ‘war on terror’, Western security agencies have promoted a similarly confused line of thinking.

Official discourse on radicalisation continually warns that ‘impressionable’ young people may be targeted online, on campuses and at various social venues, and could be ‘groomed’ by cynical operators. In November 2007, it was reported that the UK government’s Research, Information and Communication Unit would draw up ‘counter-narratives’ to the anti-Western messages on websites ‘designed to influence vulnerable and impressionable audiences here’.

Like all teenagers, Sultana, Begum and Abase are impressionable. But to cast them in the role of vulnerable passive victims of ruthless groomers is to overlook the obvious point that they are active young people who, for better or worse, took the initiative to make a radical choice. There is now evidence that, far from being groomed, one of the three girls was actively searching for contacts online. She did not have to be groomed or seduced or brainwashed; she took the initiative to follow 70 well-known jihadists online.

There is considerable evidence to suggest that young people who embrace radicalism are rarely brainwashed by manipulative outsiders. Often, they themselves seek out jihadist websites and networks. In other words, they may have made a self-conscious choice. The question is: why?

The attraction of jihadi youth subcultures

Young intelligent and idealistic people have always been drawn to radical causes. And their rebellions have long been blamed on outside agitators who are said to have manipulated them. No doubt such agitators exist, and jihadist websites and preachers certainly do their best to influence young minds and recruit supporters. But they only play a minor part in the drama of radicalisation.

The three girls who left Britain for Syria personify a broader problem of generational and cultural estrangement among Muslim communities in much of the West. In the first instance, young people of all cultural background express their identity – at least in part – through a reaction against their parents. Young Muslims are no different in this respect. What is different about their experience is that their sense of estrangement from the older generations of their communities is coupled with a profound sense of alienation from the very society that they inhabit. From their perspective, Britishness has little positive meaning; indeed, a minority look upon the values of their own society with contempt and hostility.

Young Muslims, like the East London girls, harbour a sense of alienation from and resentment towards Western society that is logically prior to any radicalising message that they might later internalise. In other words, they were not waiting to be ‘groomed’ — they are actually searching for meaning and purpose

Of course, young people from all sorts of backgrounds who find it difficult to see any meaning in life in Western society will often respond by rejecting Western values. Such rejection usually takes the form of a mild rebellion or the adoption of a countercultural lifestyle. Young Muslims, however, sometimes go a step further, and express their alienation through a jihadist outlook that constitutes a far more comprehensive rejection of society than that of their peers.

Radical jihadism provides a coherent and edgy identity. It gives rise to an Islamic youth subculture. A perusal of the language used on jihadist social media shows that it is but a variant of the ‘cool’ narratives used by other online subcultures. The behaviour of young people who are attracted to jihadist websites is not all that different to the numerous non-Muslim Westerners who visit nihilistic websites and become fascinated by destructive themes and images.

It just so happens that the destructive images communicated through jihadist websites are not simply brutalised fantasies – they are also linked to a destructive political cause. It’s worth noting that a study published last month by the Institute of Strategic Dialogue concluded that some of the Muslim women watching violent jihadist videos were captivated by the disturbing images of beheadings. The study argued that ‘the women who migrate to the territory controlled by ISIS revel in the gore and brutality of the organisation’, and added that they ‘appear desensitised to the horrific nature of the violent acts being committed’. Such an enthusiastic reaction to images of horrific killings indicates that these viewers have been drawn towards an outlook and a system of values which, in their mind, represents the moral antithesis to the Western way of life.

There’s one question that needs far greater discussion: how did it come about that a significant minority of young Muslims developed such a powerful sense of hostility towards the societies in which they were born? And also: why did we not know about it?

Potentially, there are many explanations. Many have argued that anti-Muslim prejudice, economic deprivation or the conflict in the Middle East is responsible for isolating and angering young Muslims. It may well be the case that such issues have caused bitterness in Muslim communities. However, Muslims are not the only group to have experienced prejudice. One important and distinctive feature of European Muslim subcultures is that they are relatively self-sufficient and have a strong impulse to maintain a clear boundary between themselves and other communities.

Subcultures have their own way of communicating and making sense of the world. That is why, often, what seems like senseless behaviour to one group can make perfect sense to another. The destruction of the World Trade Center appeared as an act of depraved violence to most Westerners, and yet some rejoiced at the sight of the Twin Towers collapsing. Those who identify with a jihadist youth culture react to events in a way that seems incomprehensible to many. So while millions of French people were mourning the massacre of the cartoonists at Charlie Hebdo, a small minority looked upon the killers as heroes.

This differential reaction among young people drawn towards jihadist movements is the product of the pool of knowledge of their subculture. Sociological research shows that the way that members of a subculture talk to one another and the views they hold are often different to the outlook of the rest of society. That is true for radical Muslims, as it is for other groups. Muslim subcultures possess their own pool of knowledge – that is, ideas and sentiments that are distinct to such cultures.

Unfortunately, distinctive, culturally defined pools of knowledge create a fertile terrain for the construction and circulation of disturbing views and rumours. In such circumstances, rumours about a Jewish or American conspiracy can swiftly mutate into a taken-for-granted fact. Worse still, such ‘facts’ and beliefs are rarely tested in the wider public and can thus become transformed into a deeply ingrained prejudice that is beyond challenge.

The absence of debate about the sensitive issues that divide Muslim subcultures from other sections of society is, in part, an inadvertent consequence of the policies of multiculturalism. Multiculturalism has failed to develop a moral and cultural outlook to which all sections of society can sign up. Instead it has encouraged cultural segmentation where, in effect, we now have a system of multi-values: numerous values existing side by side, none of them being properly discussed or challenged. That is why the image of a beheading can appear to some as a symbol of inspiration and to others as unspeakably horrendous. Such morally polarised reactions to the same event are the outcome of a society in which cultural segmentation prevails.

It is no use blaming schools and teachers for not teaching British values to children who find more meaning in a jihadist video than in the Magna Carta. It’s also wrong simplistically to blame malevolent preachers and online groomers for seducing three teenagers to travel to Syria, for this distracts attention from the failure of British society itself to inspire them with an open-minded, tolerant and democratic way of life. The really important question is not what lures three intelligent teenagers to Syria, but why have they rebuffed their previous way of life? A society that is unable to elaborate a moral code that binds everyone together, and which avoids discussing difficult and sensitive differences in values, will soon discover that these three girls will not be the last to give up their home comforts in favour of nihilism overseas.