The political class's pathologisation of UKIP is driven by fear, not facts. 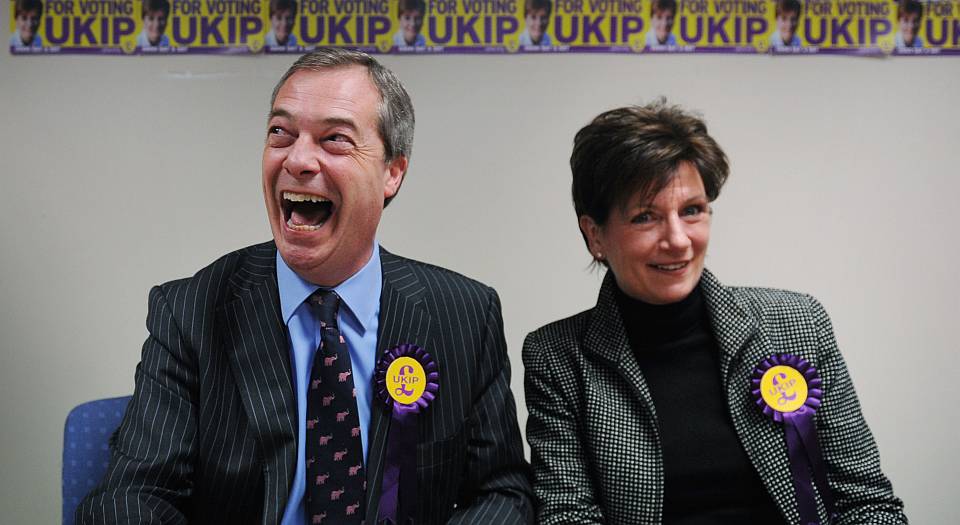 There is clearly something about the UK Independence Party (UKIP) which fascinates (and terrifies) Britain’s political and media classes.

In the past week alone, we’ve had tales of UKIP leader Nigel Farage’s eye for the ladies, or ‘crumpet’ as his friend and UKIP mascot Godfrey Bloom insisted on describing it. But we’ve also had stories laced with far darker insinuations. On Monday, for example, it was implied that we ought to judge UKIP by the far-right company it keeps at the EU.

Since 2009, you see, UKIP has been a member of a right-wing political group in the European Parliament, called Europe for Freedom and Democracy (EFD). That in itself is not news. What is, apparently, is that other members of this group have at some point somewhere described Islam as an ideology that ‘preaches hatred, violence and death’, suggested that Muslim women are having too many children, and, in the case of Frank Vanhecke, a Belgian MEP, spoken at a student rally alongside the British National Party’s Nick Griffin. Boo. Hiss. Etc.

The objective of such reporting is pretty obvious: UKIP is to be found guilty by association. Farage and friends may not themselves have espoused ‘unacceptable’ views as part of EFD, but it’s enough that their political partners have.

There is a pattern emerging here. Over and over again, the media, cheered on by mainstream politicians, seems rather keen to present UKIP as a party with a far-right, racist heart. And the more UKIP responds to the reports, the more it protests its non-racism, the more intensive the search becomes for evidence of its racism. Hence pundits and reporters can regularly be found rubbing their hands over the stray mutterings of UKIP supporters, or rifling through the closets of UKIP councillors in the hope of finding a non-PC skeleton, ideally sporting a BNP rosette. So, we’re told in glorious detail of UKIP organiser Maggie Chapman‘s proclivity for jokes featuring ‘nig-nogs’ and ‘Pakis’; we’re eagerly informed of UKIP councillor David Silvester’s letter describing the recent UK floods as God’s punishment for the government’s gay-marriage legislation; and we’re given eye-witness accounts of drunken behaviour and politically incorrect stand-up comedy at UKIP’s recent party conference in Torquay.

Taken individually, such stories tell us little; but taken in the round, they convey an impression of UKIP as a seething mass of barely concealed prejudice and bigotry. All the boxes are ticked – literally in this New Statesman article – from homophobia and misogyny, to, above all, racism. You name the unacceptable attitude, UKIP caters for it.

In many ways, however, the media are merely following a script laid down by the party-political establishment. From the moment Conservative Party leader David Cameron dismissed UKIP as ‘fruitcakes, loonies and closet racists’ in 2006, the tone had been set. This is what UKIP were to be represented as: ‘a collection of clowns’, as Tory minister Kenneth Clarke put it; a refuge for every view unpalatable to the liberal mainstream, be it climate-change scepticism or Islamophobia. Indeed, it was revealed last year that ahead of the local elections, the Conservative Party’s campaign headquarters had a team desperately digging up politically incorrect dirt on UKIP candidates, and feeding it to the press.

The Tories might be the driving force in the attempt to paint UKIP as deranged and dangerous to vote for, but the other parties aren’t far behind, with the Labour Party, in the words of one senior minister, having organised an ‘attack team’ focused entirely on combating UKIP, and the Lib Dems announcing that ‘we have just 100 days to stop UKIP becoming a major force’.

What this political and media focus on UKIP amounts to is an attempt to pathologise a party and its supporters. It is an attempt to construct the image of UKIP on its behalf, an attempt to suggest that whatever UKIP claims it represents, at its exposed core it is racist and it is hateful. A vote for UKIP, given everything that the political class and its media adjuncts have supposedly revealed it to be, is to be rendered as something to be ashamed of, something as embarrassing as claiming the Earth is flat or that Jimmy Savile did a lot of good work for charidee. A UKIP vote becomes a vote beyond the pale. In one particularly snotty article, the author calls on anyone tempted by UKIP to ‘rejoin The Reasonable, so we may continue to be the majority and laugh at things, like this [UKIP] poster’. Cue an image of a UKIP campaign poster. Naff, yes, but not hilarious.

The process of demonising UKIP, and pathologising its vote, is also having an unexpected consequence: it is lowering the bar for what counts as racism. So for a political party to be considered racist now, it seems it is no longer necessary to espouse policies reflecting an idea of racial superiority. No, to be deemed a racist party, it is enough to fraternise, for rather pragmatic reasons, with European right-wingers; it is enough to include within the fold councillors who have said racist things; it is enough to hire a stand-up for the annual party conference who makes jokes about Somali pirates. Little wonder that anti-racist campaign group Hope Not Hate has decided that UKIP is a suitable cause for a campaign. ‘We will continue to scrutinise UKIP’, it announced on its website. ‘We will monitor their comments, challenge the lies they spread and promote a Britain that celebrates its rich diversity. We will stand up positively for OUR Britain.’

This relentless presentation of UKIP as beyond the pale – a party of ‘cranks’, ‘nuts’ and ‘racists’ – completely obscures the true nature of UKIP’s appeal. This doesn’t lie in specific policies, which is just as well, given Farage’s decision to jettison all prior manifestos. Indeed, as one commentator notes, focus groups suggest that many UKIP voters are unaware of the party’s policies beyond its flagship opposition to the EU and its hard-ish line on immigration. And even then, according to an Ipsos Mori survey of UKIP’s support, the majority rate the economy, unemployment and immigration as more important issues than its eponymous core offering: UK independence from the EU.

No, what is turning a sizeable portion of the electorate towards UKIP – it polled 23 per cent of the vote in last year’s local council elections – is what it is not. It is not a party of the political class. Its attitudes are not those of the metropolitan elite. And it is not afraid to speak its rather disparate mind, as its deliberately un-PC leader Farage invariably does, a pint in one hand and a fag in the other.

That is what UKIP says to people. It speaks to a significant social stratum’s estrangement from the party-political establishment. But the source of UKIP’s current appeal is also the source of the political class’s terror. In the shifting shape of UKIP, those stuck inside the Westminster bubble are able to glimpse their own distance from those they nominally rely on for legitimacy. No wonder they’re trying to shame potential UKIP voters back into the ranks of The Reasonable.