How Ukraine was brutalised by Brussels

Blundering EU officials ignited the violence in Kiev and beyond. 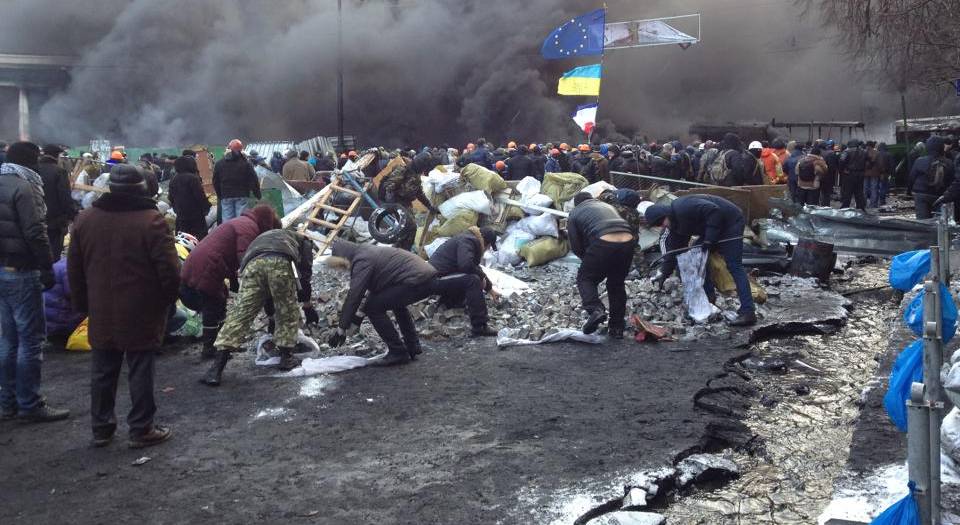 In everyday life, if you see two or more parties arguing vigorously, the best thing to do is maintain a benevolent neutrality. This simple lesson also applies to diplomacy. But, as recent events in Ukraine demonstrate all too well, it is apparently one the leaders of the European Union have failed to heed.

The EU is pursuing what it calls its ‘European Neighbourhood Policy’ in relation to a group of countries – including Armenia, Azerbaijan, Belarus, Georgia, Moldova and Ukraine – that are normally seen as being within Russia’s sphere of influence. By furthering its economic and security interests, and in the guise of ‘exporting democracy’, the EU is challenging Russian interests. This is a serious misjudgement, with serious consequences for the people of Ukraine.

The EU is playing on a longstanding division within Ukraine, between the pro-European, rural west of the country and the populous and industrialised east and south, which have long looked to Russia. It is now eight years since the start of the EU’s Action Plan for Ukraine, which talked up ‘the opportunity for the EU and Ukraine to develop an increasingly close relationship, going beyond cooperation, to gradual economic integration and a deepening of political cooperation’. Ukraine has enough difficulty balancing its internal tensions and the need to keep Russia on side (for both strategic and historical reasons, Russia sees Ukraine as a vital part of its sphere of influence). The intervention of the EU into Ukraine’s affairs, rather than helping matters, has only exacerbated these internal instabilities.

Last November, the EU held a summit in Vilnius in Lithuania with a group of former Soviet states in an attempt to agree an ‘Eastern Partnership’ with Ukraine, Moldova, Belarus and three states in the Caucasus: Armenia, Azerbaijan and Georgia. Negotiations had been going on since May 2009, in the aftermath of the Russian intervention into Georgia. The deal would have given these states greater access to EU markets, but at the expense of having to adopt many EU laws and regulations, and with no economic aid provided. However, Ukraine refused to sign the deal, having instead opted to accept $15 billion in bilateral aid from Russia and receiving a much-needed reduction in the price of gas imports. Given the parlous state of the Ukrainian economy, Russia’s offer was one Ukraine could hardly refuse.

However, Ukrainian president Viktor Yanukovych’s decision was the straw that broke the camel’s back for many western Ukrainians, who see Yanukovych as a corrupt Russian stooge and who desire closer ties with the EU. The protests of the past two months are a direct result of the failure of the Vilnius summit. At the end of last year, in an article titled ‘Europe’s Ukrainian blunder’, the former German foreign minister Joschka Fischer – no stranger himself to heavy-handed diplomacy – was sharply critical of the EU’s strategy. ‘From Yanukovych’s point of view’, he wrote, ‘[the Russian] agreement made sense in the short run: the gas deal would help Ukraine survive the winter, the loan would help keep it from defaulting on its debt, and the Russian market, on which the economy depends, would remain open.’ So why, Fischer asked, ‘did the EU press for an association agreement, without being able to offer Ukraine anything comparable to what Russia offered?’.

Even the president of the European Parliament, Martin Schulz, admitted the EU’s strategy had been a mistake. ‘I think we underestimated the drama of the domestic political situation in Ukraine’, he told the German public radio station Deutschlandfunk in November. Ukraine, he said, ‘has been in a deep economic and financial crisis’ since the introduction of democracy. ‘They desperately need money and they desperately need a reliable gas supply’, said Schulz.

Now, the situation in Ukraine is desperate. The protests are even spreading east, taking on a general anti-government character. There is the possibility of deepening divisions and conflict in Ukrainian society. Ukrainian novelist Andrey Kurkov argues that it is by no means impossible that the country will disintegrate. If the protests are suppressed, he argues, Yanukovych will be viewed in western Ukraine as an oppressor.

There is a serious tension between the aspiration and the reality of EU foreign policy. The reasons for this include the missionary zeal with which it has been pursued – apparently without regard to such pesky things as national interests, geopolitical power relations or simple domestic political stability. The EU, in its preening fashion, sees itself as offering ‘values leadership’ to the world.

So, the European Neighbourhood Policy presents the EU as a ‘community of values’. Article 7a of the Lisbon Treaty declares: ‘The Union shall develop a special relationship with neighbouring countries, aiming to establish an area of prosperity and good neighbourliness, founded on the values of the Union and characterised by close and peaceful relations based on cooperation.’ No mention here of such vile things as material interests or power politics. Once upon a time, such a drive for expansion would be regarded as ‘imperialism’ and understood as something negative. Today, the nation state – particularly when it comes to weaker states that refuse to bow down to the West – is now regarded as the problem.

What lies behind this EU drive to expand is not an evil intent or conspiracy. Rather, it is an infatuation with presenting positive values to the world, mixed with historical amnesia, that creates this ‘moral’ foreign policy. What is missing is any rational sense of the different interests that have created the situation in Ukraine, any appreciation of how the sort of meddling pursued by the EU over the past few years has ruptured delicate balances in Ukrainian society and inflamed tensions and violence that even EU officials themselves are now panicking about. What would be nice would be a European party that would stand up to this assault from Brussels on the elected government in Kiev. They would get my vote.

Sabine Reul is a writer and translator based in Frankfurt. She is also a member of the editorial team of the German magazine NovoArgumente. A longer version of this article, in German, is available here: Ukraine: Das Fiasko europäischer „Nachbarschaftspolitik“