Who wants to be an ‘ethical journalist’? 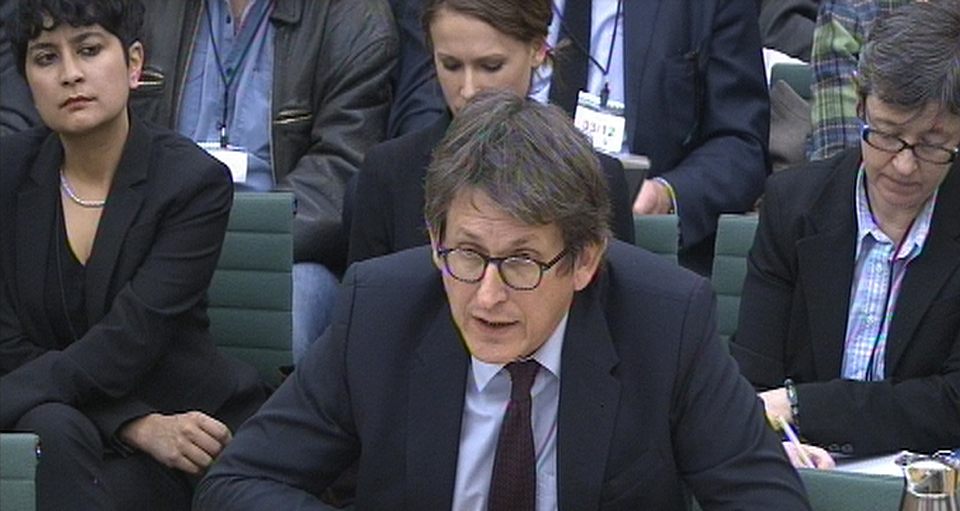 When Alan Rusbridger, editor of the UK Guardian, appeared before a committee of MPs this week, to answer questions about his newspaper’s publication of security information leaked by Edward Snowden, he was hailed as a hero of the struggle for press freedom and democracy by liberal voices on both sides of the Atlantic.

In the US, Rusbridger’s champions were led by Carl Bernstein, legendary reporter of the Watergate scandal. Shami Chakrabarti, head of the UK civil-rights lobby Liberty, attended the hearing and almost swooned in her appreciation of the Guardian editor. ‘Alan Rusbridger’, she concluded, ‘came across as the paradigm ethical journalist, consulting colleagues and even the authorities themselves before making vital targeted disclosures in the public interest’. Along with this accolade, Liberty has just given the Guardian its Independent Voice of the Year award in recognition of its ‘ethical journalism essential to the rule of law’. The award apparently ‘recognises the courage it requires to speak out against injustice when others will not, to make a stand when no one else will and to put the truth before all else, even at great cost’.

Pass the ethical sickbag, please. ‘Ethical journalism’ in pursuit of ‘the public interest’ sounds like a powerful and attractive concept. Who, after all, would favour something called ‘unethical journalism’? These things, however, are rarely as straightforward as they might appear.

Press ethics do not emerge from the ether, as if handed down in a timeless code from a cloud above the public fray. In debates about the press, talk of ‘ethics’ is generally a charade. Ethics is used as a whiter-than-white banner behind which some can pursue their own agenda, expressing their particular political and sectional interests in the idealised language of universal values.

Thus in the UK many will defend press freedom for what they deem the ethical, public-interest journalism of the Guardian or the BBC, but not for the ‘unethical’ tabloids. Indeed, the language of ethics has become a code for trying to purge the press of that which is not to the taste of those for whom ‘popular’ is a dirty word – we might call it a campaign of ‘ethical cleansing’.

It is obviously right, for example, for Rusbridger the ‘paradigm ethical journalist’ (sorry, pass that sickbag again) to take a stand against state interference in the press and political calls to prosecute the Guardian over the Snowden affair. Yet somehow the Guardian and its supporters have seemed less courageous over the police campaign against the tabloid press, the biggest inquiry in British criminal history which has so far led to the arrest of more than 60 journalists. Perhaps that is not so surprising, since it was the Guardian that effectively led calls for a political and police crackdown on the popular press in response to allegations of phone-hacking in the first place.

Rusbridger the hero of press freedom has taken a similarly partial view of the ethics of press regulation. The Guardian’s top lawyer recently described the outcome of the Leveson Inquiry as ‘a disaster’ (something some of us were clear about on the day it was set up by the government in July 2011). Yet at the time, Rusbridger and Co were keen to assist Lord Justice Leveson in sorting out the ‘culture, practice and ethics’ of the popular press. The Guardian editor himself even told the inquiry that the British press had been ‘under-regulated’ – that is, too free. Did he mean that he needed the helping hand of a regulator to edit his paper? No chance. Like middle-class childcare experts who demand compulsory parenting classes for the proles, it is only those other, irresponsible newspapers he was talking about.

Another telling episode during the Leveson Inquiry came in January 2012 when, exactly 300 years since the imposition of the first tax on newspapers (a tax aimed at keeping them out of the hands of the masses), Tory culture secretary Jeremy Hunt announced that the government favoured a post-Leveson regulator with ‘statutory underpinning’ to give it ‘proper sanction-making powers’ over the press. He suggested that only publications which agreed to obey the new regulator and rules should be classified as newspapers and so entitled to avoid VAT (Value Added Tax).

Newspapers required by law – sorry, ‘statutory underpinning’ – to obey a body with ‘sanction-making powers’, and those that object to be punished by being made to pay an extra indirect tax? That sounded something like a backdoor twenty-first-century version of the old system of state licensing and taxing of the press. Wherever could the Tory secretary of state and prime minister have got such an outlandish notion from? Hunt gave the credit for the idea of slapping dissident papers with VAT – a stamp tax in all but name – to none other than our living ethical paradigm, Guardian editor Alan Rusbridger.

But then, even when it was founded as the Manchester Guardian after the Peterloo Massacre of 1819, that liberal newspaper was widely viewed as a middle-class outfit that paid the hated stamp tax and sniffed at popular papers which refused to do so. The working-class Manchester and Salford Advertiser dubbed the Guardian ‘the foul prostitute and dirty parasite of the worst portion of the mill-owners’. What might they have made of it giving the Tories tips on how to tax papers that don’t toe the line?

Nor is the line between the journalistic practices of the ‘ethical’ press and the rest quite as clear as some would have us believe. We all now know, of course, that phone-hacking is unethical and indefensible. Except, it seems, when practised by the Guardian’s top investigative reporter, who told the Leveson Inquiry that he had hacked phone messages in pursuit of a story – ‘for ethical reasons, not tittle-tattle’. That is, of course, for ‘ethical reasons’ and in pursuit of the ‘public interest’ as defined by the editor of the Guardian.

The ‘ethical’ press is not always so averse to publishing ‘tittle-tattle’, either. The Wikileaks revelations that papers including the Guardian and New York Times splashed on in 2010 were packed with high-end personal gossip about world leaders. How did this differ from the News of the World’s phone-hacked gossip? That was obvious, insisted the Guardian – the Wikileaks stuff was in ‘the public interest’. In other words, our gossip is more ethical than your gossip. But how did they know? The Guardian editor explained that he and a team of his top staff – those with ‘great knowledge’ – had been through the Wikileaks files and decided, privately, which would be in the ‘public interest’ to publish. You pays your money for the paper you prefer and takes your choice (or not).

The Guardian has also proved as capable as any tabloid of getting carried away with its self-righteous crusades and overstepping the mark. By the start of 2012, for example, it had published no fewer than 40 corrections, retractions and apologies in relation to stories it had rushed into print about the Murdoch press and the phone-hacking scandal. Corrections the Guardian was forced to make included an apology for its frontpage claim that a Sun reporter had stalked a lawyer from the Leveson Inquiry (which non-existent crime that excited Guardian writer likened to the tabloid ‘casually defecating on his lordship’s desk while doing a thumbs-up sign’), and the withdrawal of a report, published in language no tabloid would use without the obligatory asterisks, which falsely claimed that, before the singer Charlotte Church’s sixteenth birthday, the Sun ‘began a public countdown to the day on which she could be legally fucked’.

The most dramatic mistake was the Guardian’s claim that the News of the World had not only hacked into murdered teenager Milly Dowler’s voicemail, but had also deleted key messages, giving her family false hope that she was alive. That story led directly to the closure of the NotW and the establishment of the Leveson Inquiry. A few months later, it became known that there was no evidence the paper had deleted any messages. As Brendan O’Neill observed at the time, Leveson’s ‘ethical’ cheerleaders were ‘starting to look about as reliable as the Sunday Sport’.

It turns that our ‘paradigm ethical journalists’ are not as whiter-than-white as they are painted. But then, no journalist worth their salt should want to comply with the rules and regulations some would impose in the name of ‘ethics’. The heroes of the historic struggle for press freedom would never have fitted into that ethical straitjacket, and a good thing too. What would Lord Justice Leveson have made of John Wilkes, the eighteenth-century fighter for press freedom and democracy who went to prison and the Tower of London – and declared ‘give me a grain of truth and I will mix it up with a great mass of falsehood so that no chemist will ever be able to separate them’? Or what about WT Stead, the nineteenth-century pioneer of salacious ‘tabloid-style’ journalism who was jailed for a story on child prostitution in pursuit of which he posed, not as a ‘fake sheikh’, but as a ‘fake paedophile’, in order to buy a 13-year-old girl for £5?

Yet for my money, these dirt-digging, trouble-making journalists were more of a force for moral good than any attempt to limit the freedom of the press in the name of ethics, or any high-handed insistence that it must conform to somebody else’s ‘ethical’ standards. Freedom of expression and of the press remain indivisible liberties, not gifts to be parcelled out like Christmas charity to those deemed sufficiently deserving. Nobody has to pass an ethics test to qualify for the right to publish and be damned.

Religious fundamentalists often claim that their disgust at homosexuality or abortion stems from these things going ‘against the will of God’. Thus they project their personal prejudices and preferences on to a higher source of authority. Though the prejudices they express are quite different, those attacking the popular press for offending against ‘ethical journalism’ seem to be doing something similar. They are projecting their personal tastes and sensibilities on to their secular god of ‘ethics’.

What credentials does Shami Chakrabarti of Liberty have for handing out awards for ethical journalism, anyway? It is worth recalling that this queen of UK civil society actually sat as an adviser on Lord Justice Leveson’s inquisition into the popular press – acting less as a freedom fighter than a member of the official censor’s Star Chamber. Liberty has since come out in favour of statutory-backed regulation of the press. If that is your idea of liberty and ethics, I only know that, as a defender of unequivocal press freedom, I am not an ‘ethical journalist’.