The WEF is a menace to democracy

It’s time to bring the gold-collared superclass crashing back down to Earth. 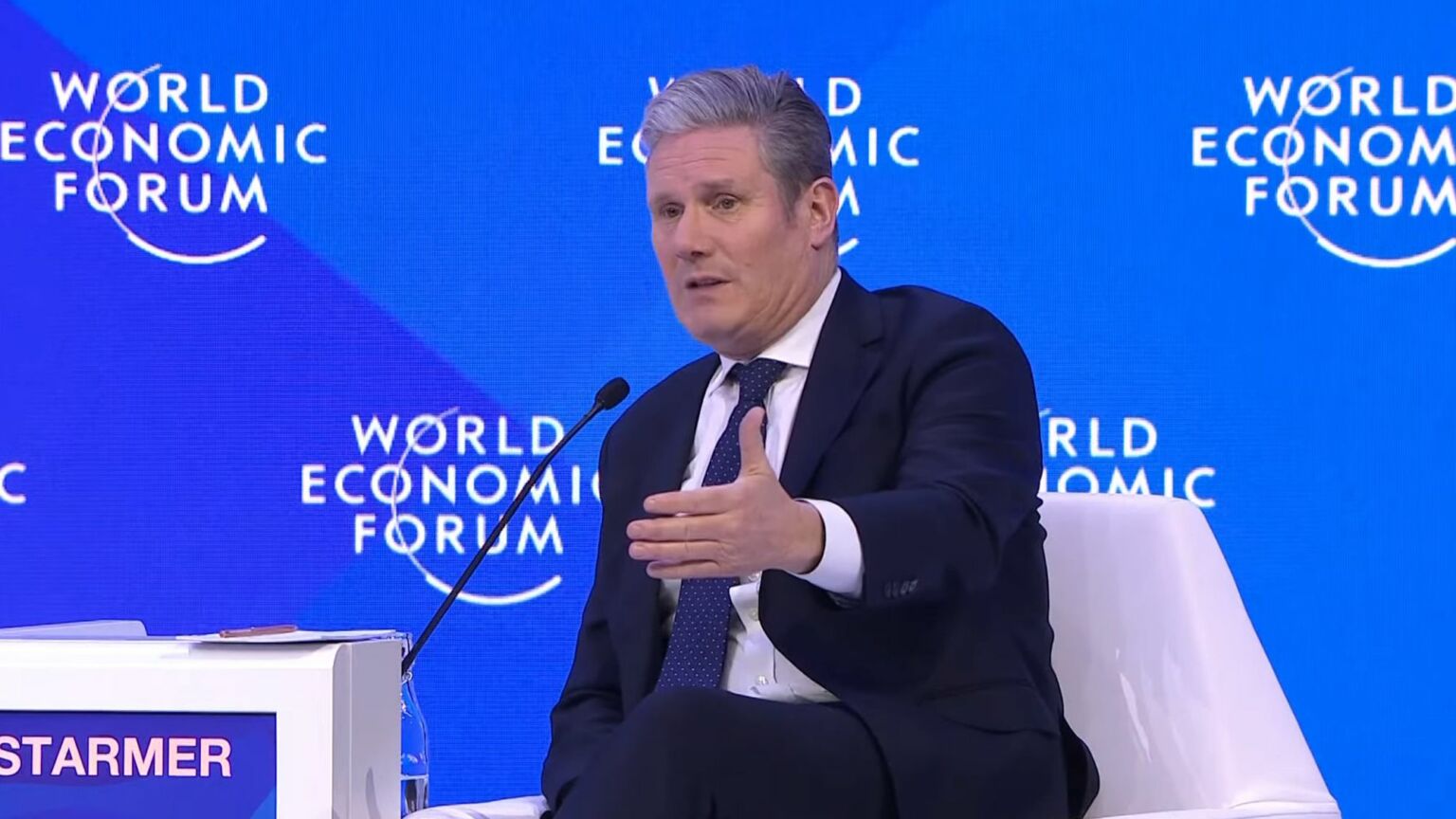 It’s not often I feel grateful to Keir Starmer. But I did last week when he gave the game away about Davos. Where would he rather be, a journalist asked him: Davos or Westminster? ‘Davos’, Starmer said, without missing a beat. Westminster’s too ‘constrained’, he moaned. It’s ‘just a tribal, shouting place’. Davos, on the other hand, the luxury Alpine resort where the world’s tycoons gather every year to quaff booze and put the world to rights, is a place where you can ‘engage with people’; people ‘you can see [yourself] working with in the future’. Ouch. If I were a British MP, I’d be feeling pretty bruised right now. Starmer wants nothing to do with you noisy tribalists – it’s the world’s woke rich he wants to mingle with.

Starmer has unwittingly revealed what ‘Davos Man’ is all about: he’s about escaping the irritating plane of democratic decision-making in preference for the rarefied company of the 21st century’s self-styled philosopher-kings. He’s about liberating himself from the constraints of democratic politics – especially the constraint of being answerable to the masses – in favour of chumming about with the better-educated, better-dressed better people of the World Economic Forum. For Starmer to dismiss Westminster, the Mother of Parliaments, the one institution over which British citizens have some direct and meaningful control, as just a ‘tribal, shouting place’ is depressingly revealing. It reveals his contempt for parliamentary democracy, and it reveals Davos Man’s belief that politics is better done away from us pesky plebs.

The World Economic Forum has been taking place at Davos in Switzerland every year since 1971. It’s an ‘annual jamboree for plutocratic banksters, avaricious industrialists and superannuated spongers to come together in an orgiastic eulogy to global capital’, in the apt words of the Spectator. That the leader of a party called Labour would rather be there than among his own citizenry tells us all we need to know about the modern left. Starmer and his shadow chancellor, Rachel Reeves, have been running around Davos telling the boss class that Britain is ‘open for business’. At one point, Starmer said we need an ‘active state’ to achieve energy independence. Does that mean nationalisation, he was asked? ‘No’, he speedily responded. ‘Completely the opposite.’ The last thing Keir wants to do is piss off plutocrats.

The attraction of a place like Davos and a shindig like the WEF to politicians like Starmer is actually pretty obvious. In Britain, a democracy, aspiring PM Starmer is constantly bombarded with tough questions, like ‘Do women have penises?’. He’s forever torn between the Remoaner instincts of probably every single person he knows and socialises with and the Brexit beliefs of vast numbers of ordinary people, including Labour-voting people. He has to go into the House of Commons, that tribal hellhole, and submit his vision for the country to the criticism and even ridicule of his fellow elected representatives. What a nightmare! Far better to be in the cushy surrounds of Davos, far from the madding crowd, in polite, agreeable meetings with polite, agreeable people, where you’ll never bump into a Brexit voter or a ‘TERF’ asking you yet again if women can have penises. Davos is sweet relief for a political class that likes politics but not the public.

This is what Davos has always been about. It is nearly 20 years since the political scientist Samuel P Huntington popularised the term ‘Davos Man’ to describe an ‘emerging global superclass’ of ‘gold-collar workers’. Huntington nailed Davos Man. He’s part of a powerful ‘class’ that is ‘empowered by new notions of global connectedness’, he said. Davos Man is ostentatiously ‘post-national’, said Huntington. These elites ‘have little need for national loyalty, view national boundaries as obstacles that thankfully are vanishing, and see national governments as residues from the past whose only useful function is to facilitate the elite’s global operations’. Recognise yourself, Keir? Starmer’s sniffiness about Westminster – just a tribal, shouting place – echoes the haughty globalist disdain for ‘national governments… residues from the past’.

There is no need to take a conspiratorial view of the WEF, to fantasise that Davos is a spooky gathering of a modern-day illuminati plotting global domination of our lives and minds. Indeed, Starmer’s enthusiasm for Davos – which he shares with many other Western politicians, including German chancellor Olaf Scholz and European Commission president Ursula von der Leyen, who have top billing this year – shows how wrong it is to view the WEF as a power-grabbing clique of faceless tyrants. On the contrary, our own politicians, people we elect, are more than happy to do Davos. They prefer it. Davos derives its power and clout not from the nefarious machinations of Klaus Schwab, but from our own political classes’ exhaustion with democracy and with nationhood itself.

This is the key dynamic in globalist politics. Globalism is not a plot by sinister rich people, even if the WEF’s use of phrases like ‘the great reset’ and ‘global redesign’ are a tad chilling. Rather, it is the outward, physical manifestation of national elites’ turn against nationhood; of their search for new forums beyond borders, and beyond public accountability, in which they might make decisions. For much of the postwar period, and with real vim since the 1970s, insulating political decision-making from public pressure has been the great cause of the modern political establishment. Hence, we’ve had the rise of the European Union, the founding of the Intergovernmental Panel on Climate Change, annual gatherings like COP and Davos – all justified on the basis that there are some issues that are so large and complicated that it is preferable for them to be discussed and decided upon by clever people untethered from the low-information urges of ill-read national populations. Davos is less the cause of the crisis of democracy than its beneficiary.

The end result of this cult of political insulation, of elevating policy from the national sphere to the global one, is the rise of a new elite that views itself as borderline godly. Witness John Kerry’s crazy comments at Davos last week. The globe-trotting climate tsar said: ‘When you stop and think about it, it’s pretty extraordinary that we select group of human beings, because of whatever touched us at some point in our lives, are able to sit in a room and come together and actually talk about saving the planet.’ ‘It’s… almost extra-terrestrial to think about’, he said. There’s a religious fervour to nutty comments like these; a fantastical vision of oneself as the messianic deliverer of humankind from doom. Now we know what happens to the political elites when they free themselves from public pressure, from us: they go mad.

It’s time to bring them all crashing back down to Earth. Back to the terrestrial world of nations and politics and accountability. Back from Davos to London and Washington and Paris. So what if they’re bored with the institutions of national democracy? These are the institutions through which the rest of us can express our interests and keep politics fresh and responsive. The gold-collared superclass might have little need for national loyalty and national government, but the working classes still do.