This time last year, scientific experts were baying to put us in lockdown. 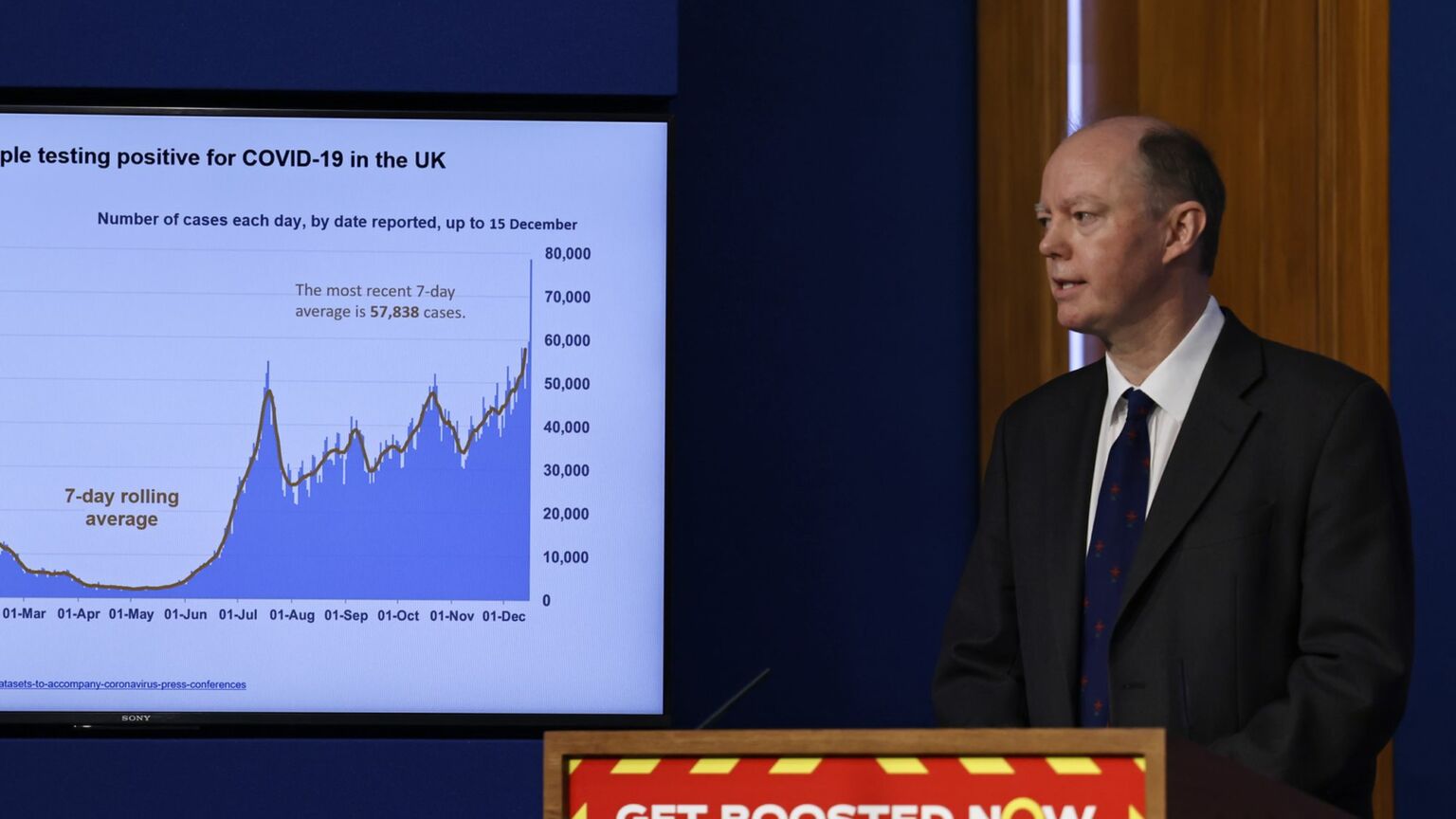 Has it really only been a year? For people of sound mind, Covid-19 has long faded into the rear-view mirror. Seeing someone wearing a face mask today is like seeing someone wearing a monocle. And yet it is only 12 months since a group of scientists, activists and journalists tried to bounce England into a fourth lockdown.

For the past few weeks, I’ve been giving a day-by-day account on Twitter of the push last year for a Christmas ‘circuit breaker’. It is easy to forget how intense was the pressure on Boris Johnson to impose ‘non-pharmaceutical’ interventions on a population that was brimming with immunity, in response to a Covid variant that was manifestly less troublesome than the Delta variant, which hit Britain in summer 2021.

At the centre of it was the Scientific Advisory Group for Emergencies (SAGE) and the teams of epidemic modellers at various universities. Any pretence that they were dry academics offering impartial advice died last Christmas. They were active participants in a campaign, leaking documents to the press and briefing against the government when speaking to the media ‘in a personal capacity’. The modelling, which had been too pessimistic for at least a year (most famously when Neil Ferguson predicted 100,000 cases a day after ‘Freedom Day’ in summer 2021), became laughably apocalyptic. A million cases a day were predicted by Christmas. Thirty-thousand hospital admissions a day were thought likely. Six-thousand deaths a day was considered a reasonable worst-case scenario. Even the best-case scenario expected a peak of 600 deaths a day.

As it turned out, the number of deaths peaked at barely 200, a sixth of the death toll reached in the two previous waves. Hospital admissions briefly exceeded 2,000 a day and many of these were ‘incidental’ – ie, among people who happened to have Covid but were admitted for other reasons. How did the scientists get it so wrong?

The minutes of SAGE meetings in December 2021 exhibit a distinct bias towards negativity. It was a fast-moving situation and all evidence about this new variant was provisional. But it is notable that worrying claims and predictions were considered ‘highly likely’, while better news was ignored or downplayed.

It is not easy to estimate the reproduction rate of a virus, but it was agreed early on that Omicron infections were doubling every two days in South Africa and were doubling at the same rate – if not even faster – in the UK. Crucially, it was assumed that it would continue doubling every two days, hence the prediction that there would be a million cases a day by Christmas (and, by extension, that everybody in Britain would be infected by early January). But if this doubling rate was ever correct, it was almost certainly an exaggeration by mid-December. And it was demonstrably wrong in South Africa, where cases in the hardest hit region of Gauteng were already in decline. Cases in South Africa as a whole were dropping in the week before Christmas.

The evidence that Omicron was more infectious (which it was) came from South Africa and was immediately considered settled science. But when evidence from South Africa suggested that Omicron was resulting in relatively few hospitalisations and deaths (which it also was), SAGE experts went out of their way to dismiss it. South Africans were younger, they said. They had built up immunity from earlier waves, they said, as if the UK hadn’t had its own waves of infections and a far more extensive vaccination programme.

This was perhaps the most shameful episode of the whole campaign. Almost from the outset, doctors in South Africa were telling us that Omicron was ‘far less severe’ and that the UK was ‘panicking unnecessarily’. Anyone who followed the data from South Africa could see what they were talking about. Waves of infections rose and then fizzled out with far fewer hospital admissions and deaths than in previous waves. On social media, this was dismissed as ‘hopium’ and a range of excuses were wheeled out, such as it being summer in the southern hemisphere and South Africa having a lower rate of obesity (which, in fact, it does not). The head of the South African Medical Association, Dr Angelique Coetzee, later said that she was asked by European scientists to shut up about Omicron being milder.

At SAGE’s meeting on 15 December, it was acknowledged that Omicron patients in South Africa were having shorter stays in hospital than in previous waves, but this was attributed (rather vaguely) to ‘differences in population demographics, Covid-19 epidemic timing and variant composition to date, vaccination types and programmes, healthcare systems, and so on’. In a televised briefing on the same day, England’s chief medical officer, Chris Whitty, said untruthfully: ‘There are several things we don’t know [about Omicron], but all the things that we do know are bad.’ On 16 December, Neil Ferguson’s team at Imperial College London claimed that there was ‘no evidence’ that Omicron was less severe than Delta, based on a study involving just 24 hospital patients in London.

By this time, SAGE was more or less openly lobbying for ‘more stringent restrictions’ to be introduced as soon as possible (‘if implemented late, it is less likely that these would prevent considerable pressure on health and care settings’). One of its members, the psychologist Stephen Reicher, told the press that ‘all the science suggests that [mandatory masks and vaccine passports] are not going to be enough… things are closing down anyway, because of the spread of infection. So I think we need to act now.’ The grab bag of self-appointed experts and hypochondriacs at ‘Independent SAGE’ had already called for an immediate ‘circuit breaker’ lockdown.

Much of the media joined in. Already obsessed by ‘Partygate’ and unable to get out of a 2020 mindset, they seemed intent on reliving the drama of the previous Christmas. On 19 December, the Guardian’s science editor wrote that ‘the scientific case for more restrictions is overwhelming’. LBC’s James O’Brien tweeted: ‘Scientists issue warnings about what is likely to happen next if Johnson doesn’t act now. Johnson refuses to act until it actually happens. We’ve seen this film before.’ The Observer’s Carole Cadwalladr tweeted: ‘It’s March 2020 all over again.’

It was not until 22 December that SAGE finally admitted that Omicron was ‘less severe’ than Delta. A study published on the same day by the team at Imperial concluded that ‘Omicron cases have a 15-20 per cent reduced risk of any hospitalisation and a 41 per cent reduced risk of a hospitalisation resulting in a stay of one or more nights’. By this time, Boris Johnson had already come to the same conclusion independently and announced that there would be no new restrictions over Christmas, in contrast to Scotland where large gatherings were banned, and Ireland where pubs had to close at 8pm. The Netherlands was already in a full lockdown.

Official confirmation of Omicron’s relative mildness was not enough to appease the Zero Covidians who insisted that a reduction in virulence would be offset by the rapid increase in infections. Even if Omicron was half as likely to hospitalise you, they argued, the health service would collapse if four times as many people were infected.

And here’s the thing. They had a point. The number of infections might not have been doubling every two days, but they were off the scale compared to previous waves. The number of recorded cases rose from 45,000 a day in early December to 90,000 a day in mid-December, and would go on to peak at 180,000 by the end of the month. The peak of the previous winter’s wave had barely exceeded 50,000 cases.

Moreover, the models had not ignored severity. Most of them had made projections based on Omicron being 70 per cent, 50 per cent or even 90 per cent less virulent, but had still come up with terrifyingly high projections for hospital admissions and mortality. And yet the first Omicron wave ended with a fraction as many deaths as the previous winter, and far fewer hospital admissions.

Scientists still argue about how much ‘milder’ Omicron is than Delta, but it is far from harmless, as Hong Kong found out earlier this year and China is finding out now. The only plausible explanation for why the modellers got it so wrong is that they greatly underestimated the protection offered by prior immunity and vaccination. Scientists at SAGE and elsewhere seem to have spent so long focussing on ‘non-pharmaceutical interventions’ that they under-estimated pharmaceuticals. By the time Omicron emerged, the UK had used 100million doses of Covid-19 vaccines. In the course of December 2021 alone, 13million people received their booster shot. In addition, most people had already had Covid once or twice. It all added up to a wall of immunity that defied the modellers’ projections. Again.

Since most people had already had Covid and had received several vaccines, Omicron held no fear for them. Even the weird misanthropes who do YouGov surveys did not support another lockdown. What, exactly, would we be buying time for? Boris Johnson grasped this. Sections of the commentariat and a handful of academics didn’t want it to end, but for a large chunk of the population Covid was already over as a political issue. If they got ill again, so be it. There have been three waves of Omicron since last winter and most people have barely noticed.

So here’s to a merry Christmas without the threat of a lockdown for the first time since 2019. The attempts to cancel Christmas last year have largely been forgotten. But for those of us who remember, those responsible will never quite be forgiven.