Ai-Da the robot and the myth of AI

How the House of Lords was hoodwinked by an elaborate ventriloquist’s dummy. 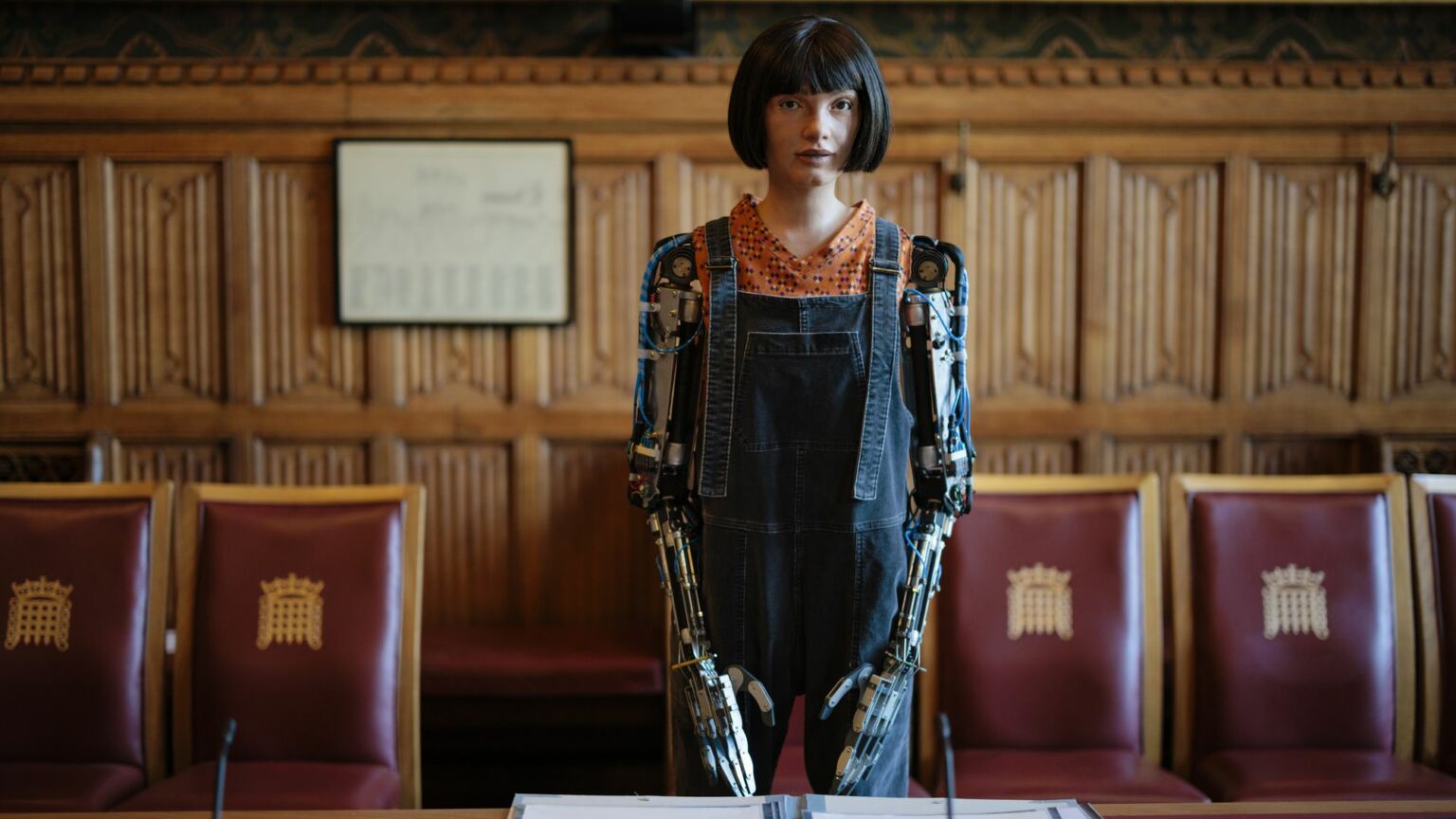 This week, a robot ‘gave evidence’ to the House of Lords – an event that is being celebrated by the robot’s promoter and the media as a groundbreaking historical moment.

The robot, called Ai-Da, is billed as ‘the world’s first ultra-realistic robot’. It is the brainchild of art entrepreneur Aidan Meller, a gallery director with no technical background. Engineering students at Leeds University designed a ‘drawing arm’, allowing the mannequin to generate primitive doodles (or ‘art’ as the media have called it). Another team created a silicone face and added a wig. This was finally assembled by Engineered Arts, a company founded by special-effects expert Will Jackson, which creates animatronic mannequins.

The result looks uncannily like Sky News’ consonant-droppin’ Westminster correspondent, Beth Rigby. And just like a real human, Ai-Da ‘can also lean forward and back, wave her arms and look around in all directions’, making it a match for any SW1 lobby sleuth.

Once his robot had a body, Meller set about generating publicity. He describes Ai-Da as ‘mind-blowing’ and ‘groundbreaking’ – claims that enthusiastic media outlets have taken at face value. Ai-Da and its exhibitions have been featured in over 900 publications. Some outlets have even ‘interviewed’ Ai-Da. Questions have to be pre-submitted to Meller in advance. Then he generates the answers so they can be ventriloquised by Ai-Da.

Last year, in a stunt worthy of Malcolm McLaren, the late manager of the Sex Pistols, Ai-Da was ‘arrested’ in Egypt on espionage claims. Meller told the press that ‘the British ambassador was working through the night’ to release it in time for an art show. Fortunately for everyone, this deadline was met.

This week, Ai-Da and Meller were summoned by the House of Lords Communications and Digital Committee, as part of its inquiry into ‘the future of the UK’s creative industries’. As with Ai-Da’s media interviews, the questions and answers were prepared in advance.

In the session, Meller sat beside the mannequin as it read out his replies, most of which offered little more than poundshop transhumanism. ‘I do not have subjective experiences… [but] I still create art’, Ai-Da told the Lords.

Despite the hype, Ai-Da isn’t the first robot to receive the call from publicity-seeking parliamentarians. Four years ago, Pepper, a talking mannequin created by engineering students at Middlesex University, ‘gave evidence’ to a committee that was established to discuss the ‘fourth industrial revolution’. MPs presumed that successors to Pepper would play a significant role in the economy in the coming years.

‘The fourth industrial revolution is possibly the most important challenge facing our nation over the next 10, 20 to 30 years’, committee chair Robert Halfon said back in 2018. The Pepper session, like Ai-Da’s, also took the form of pre-arranged questions and scripted responses. Both sessions might as well have been an email exchange. Unlike Pinnochio, neither Pepper nor Ai-Da has developed agency – they simply ventriloquise the thoughts of their creators. The physical robot is superfluous. In 2018, Wired’s Gian M Volpicelli called the Pepper session a ‘pointless parliamentary pantomime’.

This week’s House of Lords stunt deserves the same scorn. Or perhaps even more. Since at one point, Ai-Da couldn’t even complete its pre-recorded responses and had to be rebooted.

Last month, Tesla CEO Elon Musk also revealed a humanoid robot, Optimus. Musk claims that Optimus could one day perform dangerous manual work, help in care homes or become a sex partner. The media – usually more than willing to accept outlandish claims about robotics – have been more sceptical on this occasion. Experts in robotics have been given space to point out the flaws. Robots can ‘perform simple tasks and exhibit superficial levels of situational awareness, but it takes just one detail to be out of what is expected and the robot will quickly descend into a series of mistakes that will typically end with unrecoverable disaster’, notes AI researcher Filip Piekniewski in Business Insider. According to Piekniewski, Optimus is a ‘complete and utter scam’. Even Tesla-friendly critics concede that Optimus hasn’t really done much to advance the field of robotics.

Five years ago, speaking to parliamentarians about the future of AI and robotics, I urged them to take evidence from more sceptical experts – including the likes of Piekniewski, Gary Marcus and Jaron Lanier – to get a more realistic view of the field. None was ever summoned. From this, I concluded that parliamentarians care far more about being seen to be ahead of the technological curve than they do about the actual technology. This week’s Ai-Da session has only confirmed this suspicion.

The truth is that there has been no quantum leap in robotics in at least a decade. There has been some steady progress in the capabilities and deployment of robots. But there have been setbacks, too.

The most conspicuous failures have come from attempts to attach ‘artificial intelligence’ to machines. Amazon recently halted the expansion of its humanless robot stores in the UK and has also scaled back robot Prime deliveries. Level four or five autonomous driving – which would mean high or full automation – recedes ever further into the future. Robotics is advancing, but there is no sign of a ‘revolution’.

Computer scientist Jaron Lanier warned 20 years ago that ‘we make ourselves stupid in order to make the computer software seem smart’, reminding us that ‘artificial intelligence is better understood as a belief system instead of a technology’. That now seems like a spookily prescient description of today’s political class. They are so anxious to place themselves at the prow of the ship of state, their eyes trained to the horizon as it sails into a bold technological future, that they feel obliged to create the entirely imaginary world of the ‘fourth industrial revolution’. And if that means they have to abase themselves before an animated mannequin, then that’s just part of the job.