Britain’s woke elites have given a green light to anti-Hindu bigotry. 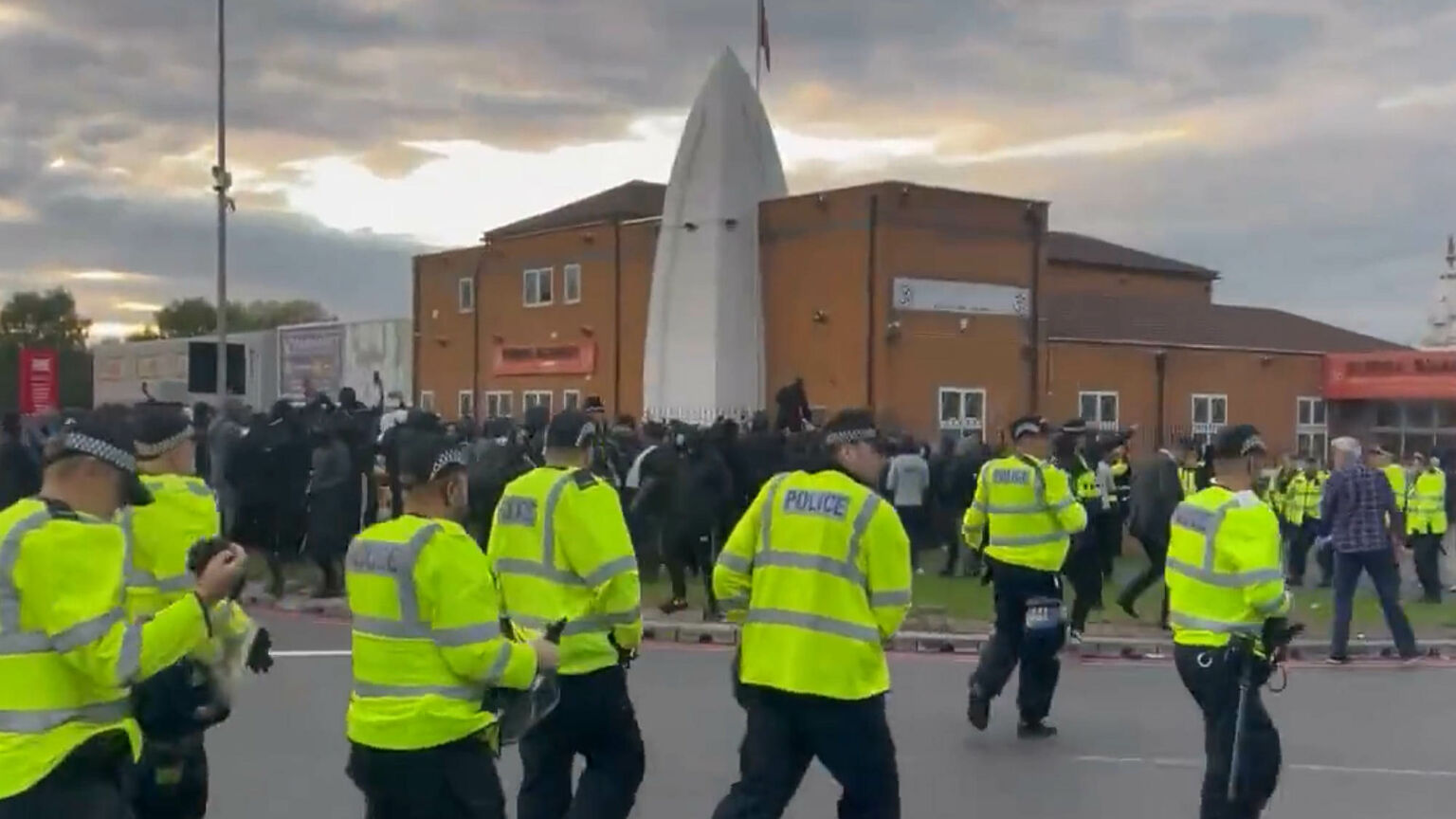 So when are we going to talk about Hinduphobia? After all, if all the things that are currently being said about Britain’s Hindu communities were said about our Muslim communities, the broadsheets would be awash with angry thinkpieces about Islamophobia. If journalists were poking around in Muslim areas for the merest hint of an extremist view, if they were saying that street disturbances in Muslim areas were a ‘wake-up call’ on the broader poison of Islamic extremism, liberal talking heads would be furiously tut-tutting over the Islamophobia of it all. Those hacks would be accused of inciting religious hatred.

And yet all of this has been done to Britain’s Indian-Hindu communities in the wake of the communal violence in Leicester, and none of the woke protectors of minority groups has said a word about it. The word Hinduphobia has not crossed their lips. In fact, it is often those from woke media outlets who’ve been doing the Hindu-baiting; who’ve been investigating the Hindu community in a way that would be considered borderline blasphemous if it was done to the Muslim community. Like the Guardian journalist who commented at length about meeting ‘a Hindu man wearing a motorbike helmet’ who expressed Hindu nationalist views that apparently have their origins in ‘fascist’ ideology. Just imagine if a journalist from the Mail went into a Muslim community after some violent event, found a bloke in a helmet saying iffy things, and held him up as proof of a fascistic malaise in sections of that community. There would be uproar in right-on circles.

The point here is not to tell journalists what they should and shouldn’t investigate. Reporters should go wherever they want and speak to whoever they like. After the instability in Leicester in recent weeks, in which gangs of masked Muslim and Hindu men clashed on suburban streets, journalists should feel completely free to explore all angles, all communities, and all ideologies that may have helped to stir up these tensions. No, what is striking is the double standards of it all. The fact that the politically correct protection from criticism that the woke elites afford to the Muslim community is so blatantly denied to the Hindu community. The fact that something can be phobic if said about Muslims but fine if said about Hindus. Now that requires an explanation.

There has been a palpable imbalance, even bias, in some of the media coverage of the violence in Leicester. ‘What is Hindu nationalism and how does it relate to trouble in Leicester?’, asked a headline in the Guardian. ‘Interesting’, I thought upon reading that: ‘Now do radical Islam.’ Much of the commentary on Leicester has focused on the problem of Hindutva, a pronounced form of Hindu nationalism in India which has now apparently leaked into the UK. As a New Statesman headline put it: ‘Leicester shows Hindu nationalism is no longer confined to India.’ Though that piece did at least admit, much further into the text, that Muslims in Leicester did bad things, too – they ‘desecrated Hindu religious symbols and some posted racist rants on social media’. The Socialist Worker’s headline was almost comically one-sided: ‘Who is to blame for Hindutva violence in Britain?’ The headline answers itself: Hindus are to blame for Leicester.

That Socialist Worker piece uses inflammatory, divisive language. ‘A new poison has entered the bloodstream of some of Britain’s most multicultural inner-cities’, it said. ‘It can cause hatred and division – and may even kill. It goes by many names but in India, where it originates, it is known as Hindutva… a form of nationalism that proclaims the superiority of Hindus above all others in India.’ It goes on to talk about ‘shadows’ and ‘fascist groups’ and ‘chauvinistic bile’ and ‘poisonous ideas’ and the ‘Hindu chauvinists’ who are ‘deeply embedded’ in political life in the UK. It talks about the ‘Hindu temples’ in Britain that have ‘invit[ed] racist speakers’ and how the ‘price’ of this is ‘already being paid’ in places like Smethwick. Just to remind you of what happened in Smethwick last Tuesday – a mob of 100 Muslims gathered outside the Durga Bhawan Hindu Temple where they shouted and set off fireworks. Yet according to the Socialist Worker, this display of anti-Hindu thuggery was the fault of Hindus themselves for inviting certain speakers to their temples. What a nauseating example of ‘victim-blaming’.

The Socialist Worker article is one of the most questionable pieces of journalism I have read in a long time. It is like an inversion of the paranoid things said about Muslims by the hard right. Indeed, if a piece like that was published in a tabloid newspaper about Muslims, the SWP would be up in arms. But when it comes to Hindus, you can say anything you like, it seems. They’re fair game.

There is a fierce policing of what can and cannot be said about Islam in contemporary Britain. Even using the words ‘Islamic’ or ‘Islamist’ to describe certain forms of extremism and violence is frowned upon. ‘Nothing to do with Islam’ is the refrain of the woke set after every act of Islamist terrorism. And yet apparently Leicester is all about Hinduism. There’s no coyness in associating that particular religion with violent behaviour – it’s right there in all the headlines about ‘Hindu nationalism’. This contrasts remarkably with the cultural elites’ reluctance to say ‘Islamist’ in the same sentence as ‘violence’. Remember the fury visited upon then UKIP leader Paul Nuttall when he said the Manchester Arena bombing was an act of ‘Islamist extremism’?

There was once even discussion about the British police ditching phrases like ‘Islamist terrorism’ and ‘jihadis’ and instead saying ‘faith-claimed violence’. The Muslim Council of Britain (MCB) even criticises the media for saying things like ‘Islamic death cult’, about ISIS, and ‘Islamic gunmen’, about, erm, Islamic gunmen. This degrades Islam by associating it with extremist violence, apparently. And yet observers are falling over themselves to say ‘Hindu’ in relation to Leicester. These were ‘Hindu men’ who were shouting a ‘Hindu nationalist war cry’ as an expression of their ‘muscular brand of Hindu pride and chauvinism’, said a writer for Al Jazeera. I trust the MCB will be issuing a statement denouncing this association of a religion with violence…

The media’s assaults on ‘chauvinistic’ Hindus, alongside their paternalistic treatment of the Muslim community as blameless, tell us a broader story about the communal favouritism of the identitarian elites. The problem with the politics of identity is not only that it treats individuals as representatives of ethnic groups, rather than as individuals, but also that it sorts ethnic groups according to whether they’re oppressed or privileged, deserving of sympathy or deserving of scorn. Britain’s Muslim community is viewed as the ultimate victim community, and thus it must be forcefielded from critical commentary, while Britain’s Indian-Hindu community has been lumped in with whites and Jews as part of the ‘privileged’, and thus problematic. The woke elites’ racial sorting process has surely helped to inflame the current anti-Hindu sentiment.

In woke circles, it has been open season on the Hindu community for some time. The Guardian has published articles saying Indian Hindus played the role of a ‘subordinate ruling class’ and ‘subcolonial agents’ in East Africa and apparently this is why so many of them now feel an affinity with the Tory party. The Guardian also notoriously published a cartoon depicting Priti Patel as a cow with a ring through her nose. And who can forget when Patel was accused by a group of Labour MPs of ‘using’ her ‘heritage and experiences of racism’ to silence the discussion about racism against black people? In short, pipe down, Hindu – your experiences are not as important as other people’s.

We can now see just how racially divisive the elite’s creed of identitarianism can be. In answer to my original question – when are we going to talk about Hinduphobia? – I would say: ‘Let’s not.’ We don’t need another ‘phobia’, alongside ‘Islamophobia’ and ‘transphobia’, being used to close down legitimate public discussion about religion, ideas and communities. No, what we need to talk about is anti-Hindu bigotry and how it has been energised by a cultural establishment that thinks of itself as anti-racist, yet which is anything but.