Why is America so obsessed with Israel?

A new book explores the outsized role of Israel in the American political imagination. 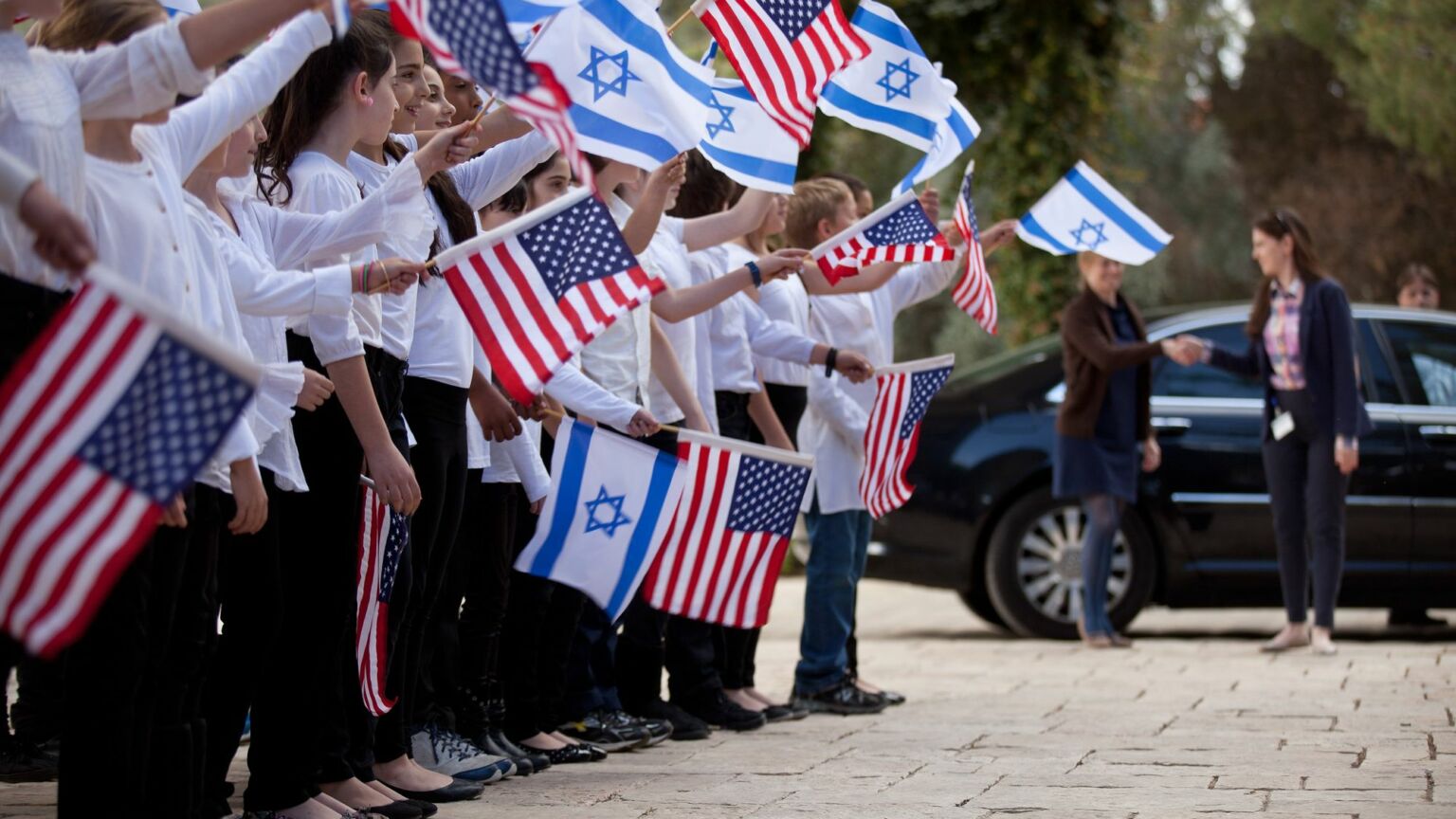 Those planning to visit Israel for the first time are often astonished when they realise its small size. Even driving from the northern tip of the country in Metula to its most southerly point in Eilat can be done in less than six hours.

In British terms, the land area of Israel within its internationally recognised borders is about the size of Wales. Or in American terms, it is slightly larger than New Jersey. Even if the Gaza Strip and the West Bank are added to the calculation, they only increase the land area marginally.

But it is not just in relation to geography that Israel is a minnow. In terms of GDP (and despite the success of its high-tech sector) it ranks 28th globally, according to the International Monetary Fund. And its population is only about 9.4million (of whom less than three quarters are Jewish). Even its military – although huge relative to the country’s own population and economy – is, in absolute terms, less substantial than those of other regional powers, such as Egypt, Iran and Turkey.

Israel’s relative smallness is surprising given its high profile globally. Matters related to Israel often lead the international news. And debates about Israel and the Palestinians are frequently the most emotionally charged of any topics related to foreign policy and global affairs.

In fact, Israel is probably the most important contemporary example of what Adam Garfinkle, an American historian and political scientist, has called ‘Jewcentricity’ – that is, the tendency to think Jews play a larger role in the world than they actually do. In that respect, it might even make sense to talk about ‘Israel-centricity’ as a grossly exaggerated view of Israel’s geopolitical importance.

Anti-Semites are the most obvious example of Jewcentrics. Often, they point to what they see as the immense power of the Jewish lobby in dominating American foreign policy. Their arguments tend to reflect older, conspiratorial tropes about the supposed power of the Jews. And they tend to focus obsessively on Israel’s shortcomings while ignoring, or at least downplaying, those of many other countries. Indeed, some of the world’s most unsavoury and discriminatory regimes are all too eager to indulge in savage criticism of Israel.

But Jewcentricity is not confined to anti-Semites. Even those who are sympathetic to Israel – or to Jews more generally – often overestimate its importance. Jews loom larger in their imagination than the cold hard facts suggest is reasonable. That probably helps explain why the peace process between Israelis and Palestinians has been central to the foreign policy of every American president, from George HW Bush to Donald Trump.

The Arc of a Covenant: The United States, Israel and the Fate of the Jewish People, a new book by foreign-affairs professor and Wall Street Journal columnist Walter Russell Mead, examines the unique position attributed to Israel and the Jewish people. As Mead puts it: ‘The state of Israel is a speck on the map of the world; it occupies a continent in the American mind.’

The Arc of a Covenant has two related key themes. It is a critique of what Mead calls the ‘Vulcan theory’ of US-Israel policy – the common obsession with the supposed immense power of the Jewish lobby. And it also explores the broader story of Israel and the Jews in American politics, cultural history and even theology, from the colonial era to the present day.

By Vulcanism, Mead is referring to a theory in astronomy popular in the mid-19th century. This held that there was a partially hidden planet – Vulcan – that explained the apparently erratic orbits of some of the Sun’s other planets. It was only with the advent of Einstein’s theory of relativity in the early 20th century that a better explanation was found.

In Mead’s view, today’s Jewcentrics are like those 19th-century astronomers obsessed with the power of a hidden planet. They selectively pick evidence to support their theory, ignore or downplay contradictory facts and miss the bigger picture. For instance, they overlook the existence of important discontinuities in America’s policy towards Israel. Indeed, the US has not always strongly supported Israel, keeping its distance from the Jewish state from the 1950s to the 1970s.

Jewcentrics also underestimate the differences within the American Jewish community. It was only when the liberal order seemed to be failing Jews – notably by refusing to allow free immigration for European Jews desperately trying to flee the Nazis – that most American Jews came to support Israel. Before that, it was a minority position. Even today there are big rifts in the American Jewish community over how Jews should relate to the Jewish state.

Mead also gives many examples of Jewcentrics missing the bigger picture. One of the most striking is what he describes as an ‘article of faith’ – namely, the idea that a powerful Jewish lobby engineered the 1947 United Nations vote supporting the creation of a Jewish state. To counter the argument, Mead makes the fair point that if the international Jewish lobby really was so powerful, why did it not stop the rise of Hitler? Or get the world’s countries to oppose Nazi Germany? Or somehow stop the Holocaust?

Mead pays particular attention to American Christians’ positive attitude towards the Jewish people and Israel. In contrast to the generally more hostile attitude of European Christians towards Jews in Europe, many – although by no means all – American Protestants came to see Jews in a positive light. The Jewish people were commonly seen as under God’s special covenant and care.

Religious and patriotic support for Israel gained new impetus with the rise of the new American right in the 1980s under President Ronald Reagan. Many evangelical Christians saw the establishment of a Jewish state in the deserts of Palestine as confirming the essential truths of Christianity. This was accompanied by a rise in support for Israel among what Mead calls ‘Jacksonian populists’. They tended to be sceptical of attempts to build international institutions, but admired what they saw as Israel’s strength.

On the left, a key thread from the 19th century onwards was the link between support for the Jewish state and American providential nationalism. Backing Israel was widely seen as in line with America’s own mission to promote national self-determination and self-rule. That was particularly the case when old empires – such as the Ottoman Empire and later the British Empire – dominated the Middle East. It should be noted that in this context, though, many Americans also supported the emergence of Arab nation states on similar grounds.

It is often forgotten that, until the 1970s, the right was more critical of Israel, while the left generally backed it. Indeed, it is notable that the civil-rights movement was avidly pro-Israel. But as progressives have moved away from support for national liberation towards a more globalist outlook, they have become increasingly hostile to the Jewish state. Strident criticism of Israel has become an important marker for the left, along with criticism of capitalism and of America itself.

In Arc of a Covenant, Mead has performed an important task in identifying some broader themes in relation to American perceptions of Israel. And above all, he has shown that to understand contemporary anti-Semitism, you have to understand the outsized role accorded to both the Jewish people and to Israel.

The Arc of a Covenant: The United States, Israel and the Fate of the Jewish People, by Walter Russell Mead, is published by Knopf. (Order it here).