From the Climate Change Act to Net Zero, green policies have throttled our energy supplies. 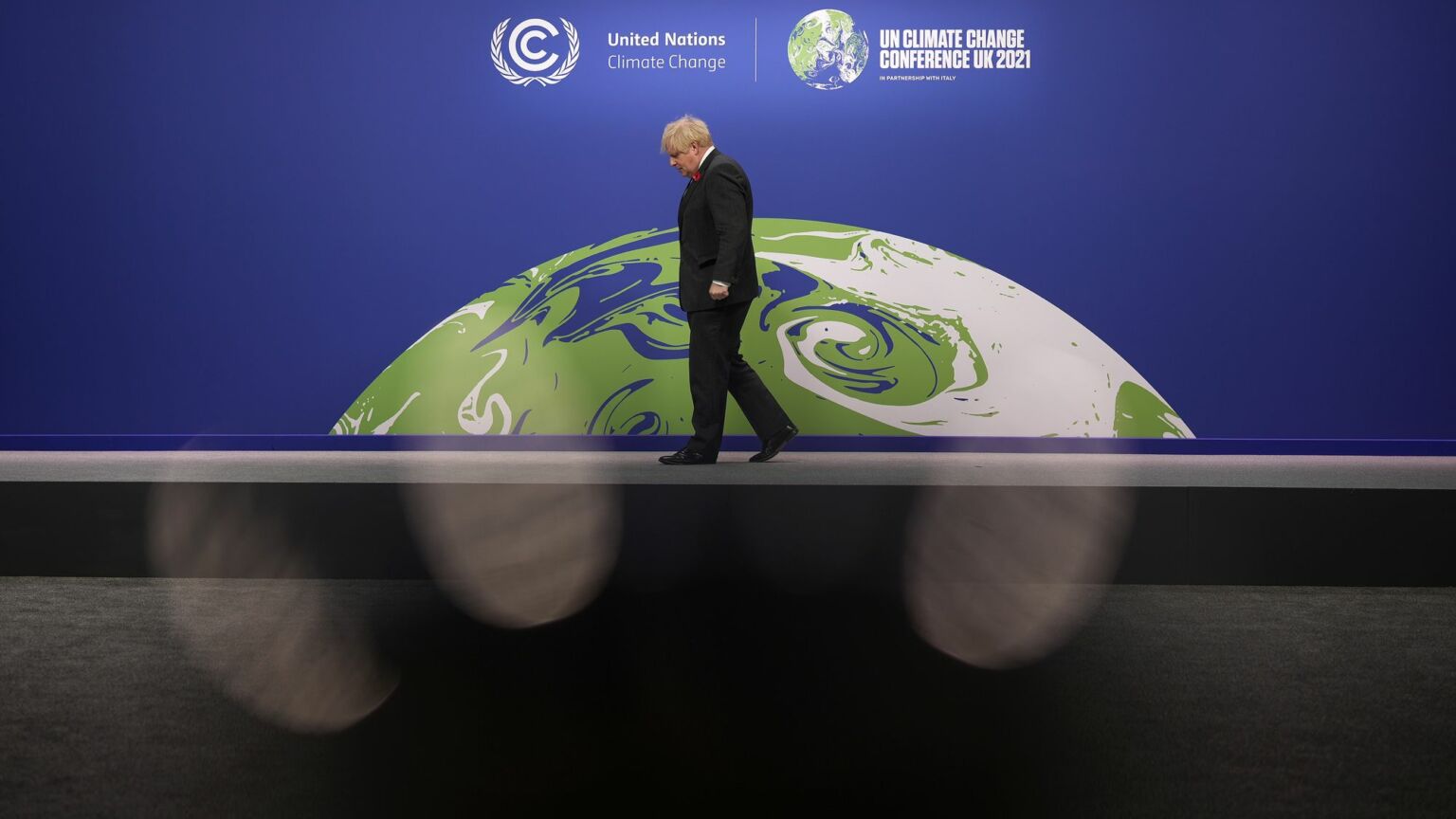 The headline cause of today’s energy crisis is the gap between the supply and demand of fossil fuels worldwide. The first big shock to energy supplies came from lockdown. Having been forced to shut down in 2020, energy suppliers simply weren’t ready for the rapid increase in demand that came when lockdowns finally ended. Then came the war in Ukraine, which sent the global price of gas soaring.

But the West is affluent. And the UK has ample domestic sources of both oil and gas. The effects of this temporary supply shock should never have been so acute. In fact, they would not have been were it not for our commitment to Net Zero ideology and for the green policies that stretch right back to the Climate Change Act 2008.

The idea behind Net Zero is simple. It stems from the scientific observation that at current rates of global CO2 emissions, temperatures will continue to rise. Net greenhouse-gas emissions, principally CO2, will have to be reduced should global temperatures rise beyond our means to adapt to them.

However, we shouldn’t confuse Net Zero the idea with Net Zero as an ideology. In the real world, it is unlikely that we can predict when, or how, we will get to Net Zero. It is even less likely that we can deliver Net Zero by a specific date through global climate agreements and centrally set targets. Yet the Net Zero ideologues have decided that the UK must reach Net Zero by 2050 – that is, in less than 30 years from now.

This is despite the fact that the technology to make Net Zero work, at scale and at a reasonable cost, just does not exist yet. Innovation in industry is haphazard. It is full of unknown variables and eureka moments. And the innovation needed is even less likely to come about from the kind of central planning currently envisioned by our climate policy.

The total decarbonisation of society, as demanded by Net Zero ideologues, would encompass all of our industry, agriculture, transport and buildings. It depends on trillions of events and decisions somehow coming into alignment at the right time. Trying to control so many unpredictable variables would be too ambitious even for Stalin. Yet in the UK we are expected to believe our parliament, which has spent 70-odd years failing to build an airport runway, can guarantee ecotopia in under 30 years.

Net Zero ideologues would wave away such objections. They see the ‘climate emergency’ as an existential threat that will bring about civilisational collapse unless we limit temperature rises by a given date. The alarmists ignore all the trade-offs, believing all other goals come second to reducing emissions.

Green ideologues approach global warming like it is still the Bronze Age, asking us to make symbolic sacrifices to appease the climate gods. They forget that, unlike our ancestors, modern technology provides ample means to protect ourselves from extreme weather. They deny that humanity is able to adapt to both higher temperatures and sea levels, despite there being plenty of evidence of us doing this all over the world already – from scorching-hot Dubai to the low-lying Netherlands.

Despite all its obvious shortcomings, this Net Zero ideology has firmly taken hold in the British establishment. The cheerleaders of Global Britain hope to ‘lead the world’ in tackling climate change. Yet our leaders can scarcely deal with the domestic problems created by our climate policy.

That climate policy has restricted our energy supplies is now undeniable. Only last year, the government attempted to throttle oil extraction in the North Sea by mandating a ‘climate compatibility test’ on new oil and gas drilling. The UK’s ongoing moratorium on fracking for shale gas, first announced in 2019, combined Tory-shire NIMBYism with a desire for virtue-signalling ahead of the COP26 climate-change summit in Glasgow.

All climate legislation can be traced back to the UN’s 1992 Rio Declaration and subsequent 1997 Kyoto Protocol. These were based on the 1985 Vienna Convention and 1987 Montreal Protocol, which enabled the elimination of ozone-depleting substances such as CFCs and Halons. But eliminating specific pollutants by swapping them for viable substitutes is one thing. Reducing levels of an atmospheric gas – which is emitted by vast swathes of human activity – is another challenge entirely.

In the UK, the first legally binding emissions-reduction goals were set out in the Climate Change Act 2008. The economic case for the act was established in the 2006 Stern review. This used modelling to argue that spending £14 billion per year on climate action (or one per cent of GDP) would cost us less than the damage caused annually by inaction (calculated at five per cent of GDP). And so immediate action was therefore justifiable. Only two years later, Stern’s claim about the costs of climate inaction miraculously doubled to 10 per cent of GDP.

Stern’s forecast essentially presented what was a radical speculation as an objective fact. Though Stern understated the costs of climate action and overstated the benefits of intervention, his approach has been repeated in climate-policy justifications ever since.

At the time the Climate Change Act was first introduced, Tory peer Lord Lawson pointed out that, since the world in the year 2100 was expected to be seven times richer than in 2008, it would easily cope with warmer climes (the link between prosperity and reduced risk of harm from weather is well-established). In other words, limiting growth today to make us better off tomorrow is unlikely to work. His advice was sadly ignored.

The Climate Change Act also ignored the global nature of climate change. Self-evidently, the UK, a country responsible for under one per cent of global emissions, cannot solve climate change by itself. Any efforts to go further and faster than industrial rivals risk merely offshoring emissions rather than reducing them. And reducing domestic production of fossil fuels, while remaining dependent on them from abroad, risks our energy security and causes economic harm. The current energy crisis has borne this out entirely.

The Climate Change Act established a dangerous pattern. Climate policy from 2008 onwards received hardly any scrutiny, let alone dissent. This was partly by design. The act established a hybrid regulatory agency, the Climate Change Committee, which both monitors progress on emissions goals and lobbies the government on a vast array of climate policies. This is wholly undemocratic. It delegates political judgements, like evaluating trade-offs between decarbonisation, affordability and energy security, to an unaccountable quango.

Essentially, climate policymaking was stripped of any democratic debate. So it was no surprise that by 2019, parliament could declare a ‘climate emergency’ and sign up to a Net Zero target by 2050 with barely a flicker of opposition. Nuanced political debate about the trade-offs stood zero chance.

What’s more, environmental policy has pushed us to adopt expensive and inefficient technologies. Price signals and incentives would allow firms to achieve decarbonisation efficiently. Yet these have been displaced by politicians trying to second-guess markets, hoping to pick technology winners. Such interventions are often counter-productive – a problem explored in some detail by the recent IEA publication, Carbon Conundrum. The result has been high levels of subsidies for inefficient energy sources (including old, decaying windfarms) and for innovations unwanted by the public (such as heat pumps).

Nearly every UK climate intervention from 2008 onwards has set the market up to fail and has contributed to the current energy mess. Energy policy must stand up to the vested interests our woeful climate policy has created.

It matters not a jot whether the UK ‘leads the world’ in wind, Carbon Capture and Storage (CCS) or anything else. What matters is that we have plentiful supplies of reliable and affordable energy, and that we decarbonise cheaply, without risking blackouts and freezeouts. That would be an example worth following.

Reforming the Climate Change Act and ditching the green ideological grandstanding should be the first priority for the next prime minister. Indeed, it is the only way out of this energy crisis.