Pride Cymru and the rise of woke homophobia

Now police are removing lesbians from Pride marches for the crime of challenging trans ideology. 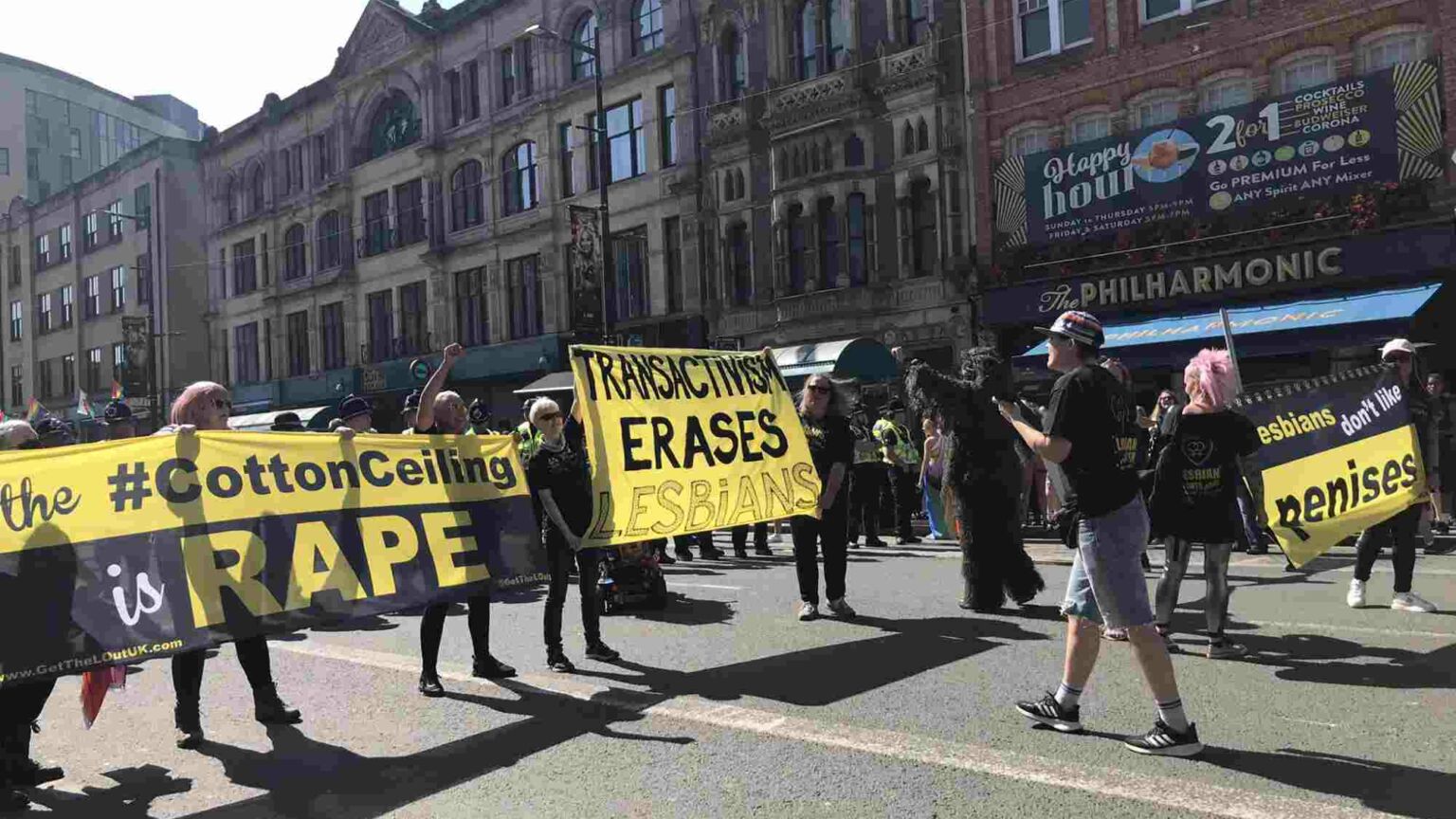 There are few sights more joyous than that of bolshy lesbians celebrating how few fucks they have left to give. And such scenes were in abundance on Saturday at Pride Cymru in Cardiff, Wales’ biggest LGBT parade, which was joined by the lesbians of the ‘Get the L Out’ (GTLO) campaign. The GTLO banners might have seemed baffling to the uninitiated – with slogans such as ‘lesbians don’t like penises’, ‘trans activism erases lesbians’ and ‘lesbian not queer’ – but they speak to a profound rift that has emerged in the so-called LGBT movement.

GTLO’s aim is to organise lesbians independently of the LGBT umbrella. At Pride, the GTLO women were met with jeers from onlookers and parade participants. But they marched and danced on for as long as they were allowed to.

As hostilities began to rise, the GTLO marchers were told by the police that they would have to be ‘removed’ from the march ‘for their own safety’. Some GTLO members say they were also threatened with arrest, although this was ultimately avoided. Presumably, the police were aware of the poor optics of throwing lesbians into a van at a Pride parade.

Angela Wild, spokeswoman for GTLO, tells me the action was about ‘lesbian visibility’. ‘The trans movement does not represent the vast majority of people who are same-sex attracted’, she says. ‘We do not have the same needs and there is no such thing as the LGBT family. Lesbians have rights. Gay men have rights. Trans people have rights. But these rights conflict. And trans ideology has been allowed to overtake the whole umbrella.’

In response to the GTLO protest, Pride Cymru organisers said ‘there is no place for hate at Pride’ and, predictably, that ‘trans rights are human rights’.

Pride organisers and other LGBT groups will try to deny that there is any conflict between lesbians and trans ideology. But, in reality, the Pride movement is now imploding under the contradictions of its so-called inclusivity. Go to a Pride march today and you will see everything from butt-plug-adorned leatherboys to human pups. Meanwhile, simply being homosexual is now vanilla at best, or worse, liable to get you excluded. For the one group that Pride cannot seem to tolerate is lesbians who openly reject people with penises. For this, the lesbians of GTLO have been branded transphobic and hateful.

The demand to accept trans people’s proclaimed gender identities has had a profound effect on lesbian and gay communities. Lesbians who turn to dating apps to meet like-minded women can no longer be assured that they won’t be matched with a male who identifies as a ‘lesbian transwoman’. Those who complain about this are booted from the apps. This is despite the bulging truth that nearly all ‘trans lesbians’ have male genitals.

According to trans activists, for a lesbian to reject a trans-identified male is a form of transphobic discrimination. Activists even have a name for this phenomenon – ‘the cotton ceiling’. This is a grotesque play on the feminist concept of the ‘glass ceiling’ that is said to keep women out of top jobs. The ‘cotton’ in the cotton ceiling refers to lesbians’ underwear. Yet rather than call out this entitled and predatory thinking, the LGBT lobby goes along with it. Chief executive of Stonewall Nancy Kelley has described lesbians excluding transwomen from their dating pool as a form of ‘sexual racism’.

On Saturday, as GTLO marched to draw attention to all of this, some at the parade robotically bleated ‘trans rights are human rights’ in an attempt to drown them out. No doubt most of the attendees at Pride Cymru simply did not know or understand the growing conflict between lesbians and trans ideology. And in a way, who can blame them. Pride has become little more than a spectacle endorsed by corporate sponsors. It has long been stripped of its radical political meaning.

This was clear on Saturday when attendees I spoke to knew all of the ‘right’ words and slogans to say, while seemingly not understanding their meaning or implications.

‘I don’t know what this is about, but they ought to be more tolerant’, said one woman of GTLO, who was standing to watch the parade. When asked to expand on this she became agitated, ‘Well, gay people are gay and trans people are trans. What’s the problem?’ Her friend nodded in vigorous agreement. A man lent in to helpfully explain: ‘These ladies need to understand we like our penises, and so do ladies.’

Since the gay-rights movement burst into existence some 50 years ago, so much has changed for the better. ‘Gay bashing’ still happens but is no longer routine. Similarly, lesbians no longer face the horror of having their children removed from their care. And yet, once again it has become de rigueur to suggest that homosexuals should alter their sexual orientation to be more socially acceptable – this time at the behest of the very LGBT organisations that once championed their rights.

In this sense, the GTLO protesters were pulling on the forgotten roots of Pride. Here was an embattled minority fighting a hostile establishment in an attempt to gain acceptance and understanding.

Still, in 2022, it really should not need saying that lesbians do not like or have penises.