Jacinda Ardern was never the pandemic heroine she was made out to be. 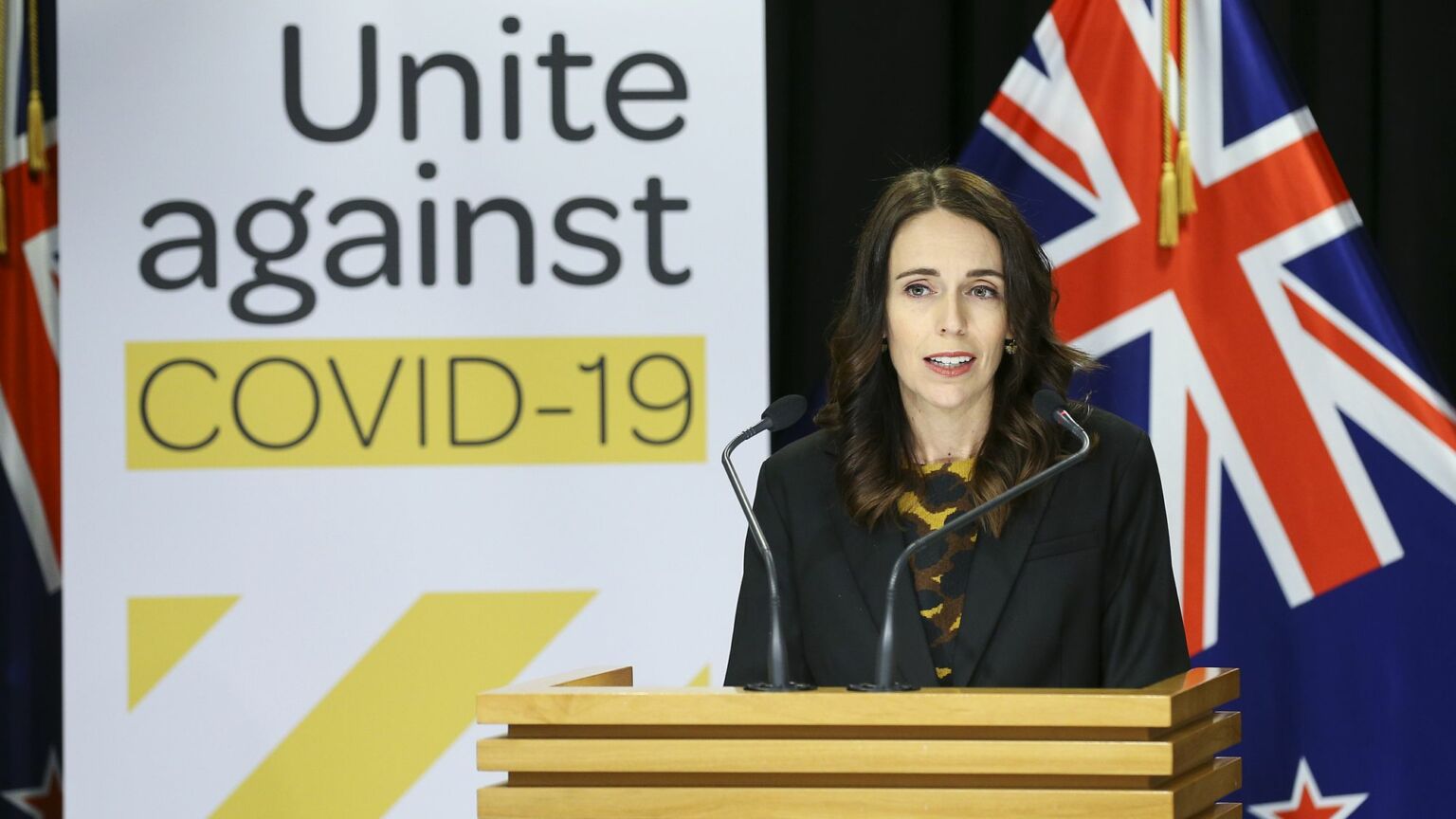 Throughout much of the pandemic, proponents of Zero Covid and lockdown have promoted the island nation of New Zealand as a success story. Since the beginning of March 2022, however, this success has turned sour. Covid cases in New Zealand have exploded, with cumulative cases per capita now exceeding US levels. If New Zealand case rates continue to grow as they have in the recent past, cumulative per-capita cases will exceed those in the UK and the EU in the coming months.

On 28 February 2020, New Zealand’s public-health authorities identified the nation’s first Covid patient – a traveller from Iran, where a large outbreak of Covid cases was then proceeding. New Zealanders panicked, stocking up on food, toilet paper and other necessities. Rumours surfaced that the New Zealand government planned to impose lockdowns, including mandatory stay-at-home orders.

On 19 March 2020, Jacinda Ardern, New Zealand’s prime minister, swatted away the rumours, telling people to look only to the government for true information: ‘Unless you hear it from us, it is not the truth.’ Just days later, on 25 March 2020, Ardern imposed a nationwide lockdown, encouraging New Zealand’s ‘team of five million’ citizens to help ‘prevent the spread’ of Covid.

Just over a month into New Zealand’s sharp two-month lockdown, Covid cases dropped to zero. On most days throughout 2020 and 2021, New Zealand reported no new Covid cases. While much of the rest of the world suffered through pandemic and lockdown misery in 2020, New Zealand residents proudly posted pictures on social-media sites of normal life. In the New England Journal of Medicine, experts funded by the Health Research Council of New Zealand bragged about how New Zealand’s strategy of lockdown, closed borders, contact tracing, isolation and quarantine had conquered the virus afflicting much of the rest of the world.

Why did New Zealand succeed in those early months in eliminating Covid? It had two significant advantages that many other countries lacked. First, Covid likely first arrived in New Zealand in early 2020 – midsummer in the southern hemisphere. Although it can spread out of season, Covid has a seasonal pattern, and winter is its season. If this highly infectious virus had landed on New Zealand’s shores in its winter, the virus would have spread more readily. Second, New Zealand is an island nation with the majority of international traffic coming in through a single airport in Auckland. Shutting itself off from the rest of the world is possible in New Zealand in a way that is impossible elsewhere.

The Zero Covid success, however, was far from costless or complete. Closed borders meant many ex-pats faced steep hurdles returning home, even to care for sick family members. The two-month-long lockdown at the beginning of the pandemic led many to delay essential health services, subsequently causing overburdened hospital systems and long delays in medical care for tens of thousands of New Zealanders that continue to this day. Despite effectively zero community spread of Covid in 2021, the average of weekly mortality levels was higher than expected, given mortality patterns from before the pandemic.

There was economic damage as well during the Zero Covid period. New Zealand’s typically robust tourist industry collapsed as overseas visitors stopped coming. The New Zealand economy shrank by two per cent in 2020 despite Zero Covid, recovered to grow by 5.6 per cent in 2021, but shrank again in the first quarter of 2022 as Omicron cases spread throughout the nation. In July 2022, inflation reached 7.3 per cent, sharply reducing the purchasing power of New Zealanders.

Looming over the citizens of New Zealand throughout its Zero Covid glory days was the threat of another lockdown whenever the public-health authorities found even a single case on the island. After 100 days with no community transmission, in August 2020, the emergence of a few cases led Ardern’s government to impose a stay-at-home order in Auckland and restrictions on gatherings in the rest of the country. This pattern repeated itself over and over during the pandemic, often including sharp restrictions on freedom of movement across the country. During one lockdown in September 2021, two enterprising citizens smuggled contraband Kentucky Fried Chicken into Auckland from outside the city limits and were arrested for the crime.

When the Covid vaccines arrived in December 2020, they offered a way out of the Zero Covid trap that New Zealand found itself in. At great cost, the policy had ‘worked’, but there was no endpoint to it that did not involve isolation from the international community forever. With the advent of the vaccines, New Zealand had a way out.

In fact, the vaccine offered two possible ways out, and New Zealand needed to choose between them. On the one hand, if the vaccine could durably prevent the infection and transmission of the disease, it could be used to effectively protect the island from ever having a sizeable Covid outbreak, as long as a sufficiently large portion of the population were vaccinated. On the other hand, if the vaccine protected against severe disease and death from Covid infection, it could be used to protect high-risk people (the elderly and others). It could be used, in effect, as a tool for the focused protection of the vulnerable, as suggested in the Great Barrington Declaration, which I co-authored back in October 2020. In either case, the vaccine would enable the lifting of the lockdowns.

Despite the impetus for ending the Zero Covid policy as rapidly as possible, the New Zealand government dawdled in its vaccine rollout. While many developed countries vaccinated a significant fraction of their elderly populations by April 2021, New Zealand delayed. As late as October 2021, the Ardern government came under fire for its delays in coming to an agreement with vaccine manufacturers to obtain sufficient doses for the whole population. The government organised an ‘election-style’ vaccination drive throughout October to make up for the problem. Nevertheless, when the Delta wave of the virus hit the world, only a small fraction of New Zealand’s population was vaccinated, so the lockdown restrictions continued.

Ultimately, New Zealand chose a strategy of vaccinating its population for herd immunity rather than a strategy that primarily focused on protecting the vulnerable and rapidly lifting restrictions. The New Zealand government set a target of immunising 90 per cent of its population as a precondition for ending restrictions. It enforced its policy by requiring large classes of workers – including police, healthcare workers and some educators – to be vaccinated as a condition of employment. It instituted the ‘NZ Covid Tracer’ application for smartphones that businesses could use to monitor the vaccination status of patrons.

Unfortunately, New Zealand bet wrongly on the vaccine-induced herd-immunity approach. The problem is that while the vaccine prevents severe disease and death due to Covid, it does not stop the disease from spreading. This fact was impossible to know with certainty in late 2020.

By late 2021, country after country with high vaccination levels experienced large waves of Covid cases. The only way this was possible was if the vaccine did not stop people from becoming infected and transmitting the disease onward. High-quality papers published in top medical journals demonstrated that vaccination protected against infection for only a few months after vaccination. Boosting with additional vaccine doses – especially in the Omicron era – also does not prevent infection.

From this evidence, it was clear that New Zealand’s herd-immunity strategy would inevitably fail. When it finally opened up, it could expect a significant wave of Covid cases, which is precisely what happened.

The Omicron wave hit the world in late 2021 and early 2022, with a highly infectious variant capable of evading immunity and infecting both people who were Covid recovered and vaccinated people in high numbers.

By February 2022, like other developed countries, New Zealand had successfully vaccinated a large proportion of its population, elderly and young, vulnerable and non-vulnerable alike. The pressure on the government to relax the lockdowns was immense. Finally, even as a wave of new cases hit New Zealand in late February / early March 2022, PM Ardern jettisoned Zero Covid and adopted a ‘suppression’ policy. In April, Ardern’s government rescinded New Zealand’s vaccine mandates and passport policies. The Covid surge that started in late February continues to today. Zero Covid lockdowns have not returned, though mask mandates remain in place in select venues.

With two-and-a-half years of hindsight, a tentative evaluation of New Zealand’s lockdown-focused Zero Covid strategy is possible. On the plus side of the ledger is that New Zealand’s strategy delayed the inevitable spread of Covid throughout the population to a time after the development, testing and deployment of a vaccine capable of reducing the burden of severe Covid disease. Despite having experienced more Covid cases per capita throughout the pandemic than the US, New Zealand has a tiny proportion of the US’s Covid-attributable deaths per capita.

On the negative side of the ledger is the tremendous burden on the New Zealand population that has come from being isolated from the rest of the world for such a long time, and from the intermittent lockdowns the government imposed on the population. All-cause excess deaths – below baseline levels in 2020 – shot up in 2021 and in 2022. Some weeks, recorded death rates were at 32 per cent above the norm. New Zealand delayed and reduced Covid deaths at the expense of increasing deaths from other causes. And then, of course, there are the enormous economic, psychological and additional health costs of lockdown that the population will pay out for over the coming years.

The strategy itself is also not exportable to other countries. It depended on the good fortune of New Zealand being an isolatable Pacific island in the southern hemisphere. Suppose Covid had hit during New Zealand’s winter rather than its summer. In that case, it is unlikely that the March / April lockdown (instituted late relative to other countries like China or Italy) would have worked to reduce Covid cases to zero during that first wave. And, of course, not every country is located on an island in the Pacific.

After the vaccine arrived, New Zealand’s decision to use it to free itself from its Zero Covid trap and the ever-looming threat of lockdowns was smart. However, New Zealand failed to vaccinate its population with urgency, exposing its people to a full year of Zero Covid harms even after most developed countries had deployed the vaccine successfully. If the government had adopted the Great Barrington Declaration strategy of vaccinating for focused protection instead of for herd immunity, and if it had not dawdled in obtaining the vaccine, New Zealand could have been open by mid-spring 2021 rather than mid-spring 2022.

Finally, New Zealand’s strategy relied entirely on the development and testing of a vaccine outside of its borders. Indeed, the vaccines could never have been tested in 2020 and 2021 within New Zealand because there were insufficient Covid cases to run a meaningful randomised trial. In effect, New Zealand relied on the fact that other countries did not adopt a Zero Covid policy to create conditions that permitted New Zealand to escape from the Zero Covid trap it embraced until spring 2022.