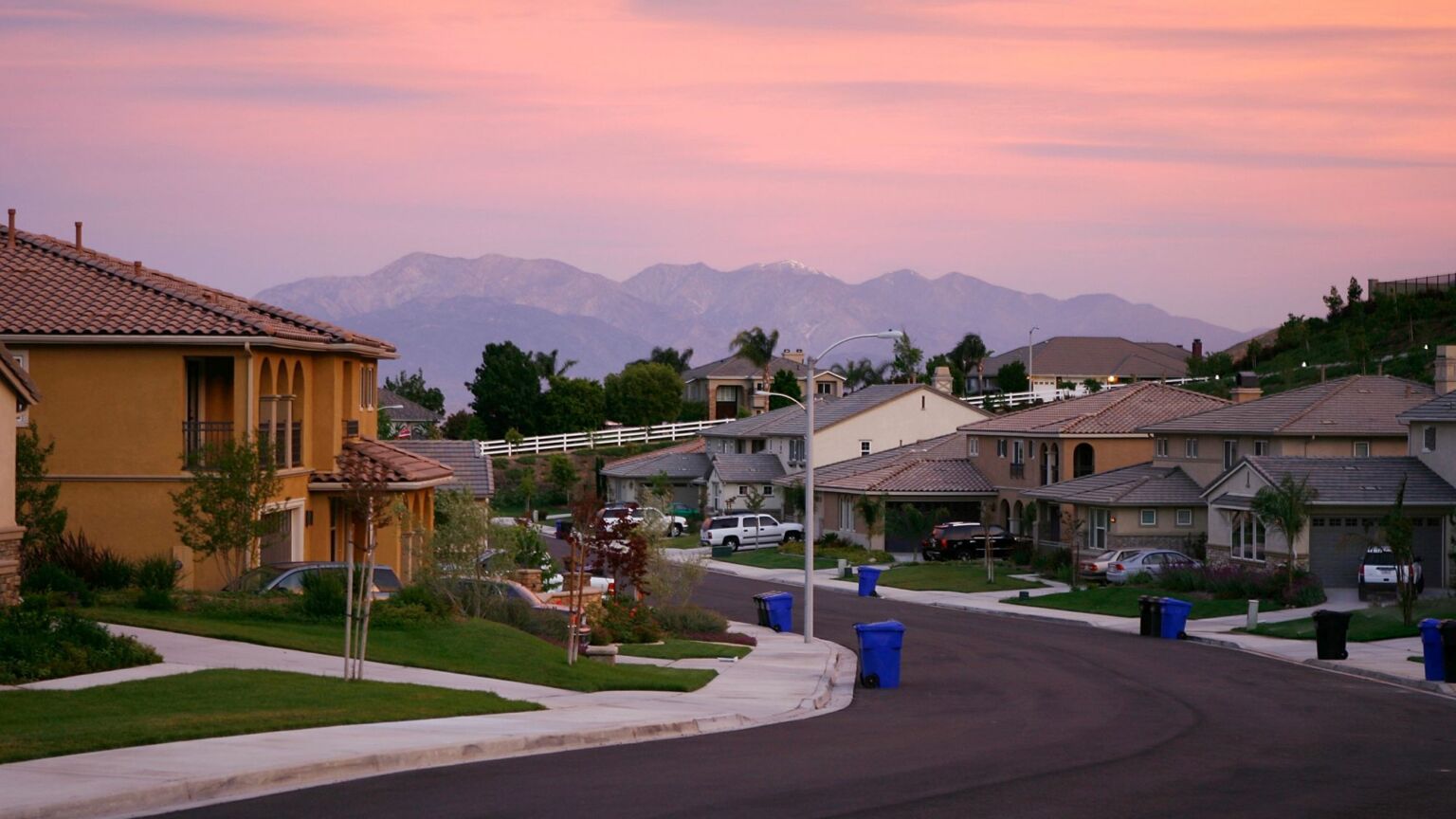 Why suburbia will decide the future

As millions of Americans migrate to the suburbs, a huge political shift is underway.

Welcome to the future of American politics. The US population is changing in major ways that will likely alter the balance in politics and economics to the advantage of Republican-leaning red states, as well as suburbs and exurbs across the country.

Recent census numbers spell out several critical shifts in the US population. These were evident before the pandemic but they have also been accelerated by it. Some regions are clearly ascendant, and others are fading. As the population shifts towards states in the south and the intermountain west, the political order will follow, as these places are set to gain more congressional seats and electoral-college votes for presidential elections.

The biggest population losses over the past year took place in three key states: New York, California and Illinois. Meanwhile, Florida, Texas, Arizona and South Carolina had the greatest gains. Virtually all the states with the highest economic growth, the fastest job growth and the highest fertility rates tend to lean to the GOP. These also tend to be more culturally conservative states.

The other major shift transcends state boundaries: America is becoming increasingly suburbanised. Suburbs account for about 90 per cent of all growth in the US’s metropolitan areas since 2010. Between 2010 and 2020, the suburbs and exurbs of the major metropolitan areas gained two million net domestic migrants, while the urban core counties lost 2.7million people.

We have seen an accelerated and marked decline in urban-core populations over the past two years, driven by the rise of online work, rising crime and worsening public health. There has also been a shift, particularly since the pandemic, to less congested, less regulated and less taxed places. Surprisingly, this even includes rural areas. The same goes for businesses, where investment in corporate real estate is moving away from dense urban areas.

These shifts in population are continuing rewrite the political map. In 1960, New York accounted for 45 electoral votes while Texas had 24 and Florida 10. In 2024, New York will be down to just 28, while Texas will get 40 and Florida will get 30. California, the one great blue-tilted megastate, still leads all other states with 54 votes in 2024, but this is down by one vote since 2020, due to below-average population growth.

The other big winners will be the suburbs, home to at least 40 per cent of all House seats. The political future will be particularly determined by the faster-growing suburbs of cities like Dallas, Houston, Austin, Phoenix, Nashville, Orlando and Tampa. But the suburban trend applies to blue states as well, with suburban growth easily outstripping the core urban counties in places like Seattle, the San Francisco Bay Area, New York and Washington, DC.

Most analysts agree that whichever party appeals most to suburban and exurban voters will be in the driving seat. For now, these demographic trends seem likely to help the GOP more than the Democrats.

Yet things are far from certain. Both the suburbs and red states are rapidly diversifying. And they are attracting more millennials, who are generally seen as holding more socially progressive views. The fact that the millennial generation is the largest in American history has led some analysts to prematurely proclaim that ‘progressives control the future’. You could see signs of this in the strong vote this week against abortion restrictions in Kansas. This was largely propelled by voters in Johnson County, a popular place for young families located across the river from the core of Kansas City, Missouri.

These results suggest suburban politics are fundamentally competitive. In 2018, the last Midterm elections, Democrats performed far better in the suburbs than in 2014, benefitting from a widespread disgust among suburbanites with Donald Trump’s behaviour and the increasing stridency of some of his supporters. In 2020, the so-called Democratic flip zone moved further out towards the exurbs. Joe Biden was able to win not just the big city cores, which are reliably Democratic, but also the suburbs. By one analysis, Biden won 51 per cent of the suburban vote, up from the 47 per cent that Hillary Clinton won four years earlier.

The movement of minorities to the suburbs could also be seen as helpful to the Democrats. Virtually all the growth in suburbia over the past generation has been from minorities. As opposed to the long-established meme of the ‘white’ suburbs, among the 50 largest US metropolitan areas, over the past decade, non-Hispanic whites accounted for less than four per cent of growth in the suburbs and exurbs. Latinos accounted for nearly half of the growth, while Asians, African Americans, mixed-raced people and other groups made up the balance.

Yet the opportunity this presents could be squandered by the Democrats. Mainly at fault is Biden’s embrace of what James Carville, former campaign manager for Bill Clinton, has dubbed ‘faculty lounge politics’. With its emphasis on critical race theory, transgenderism, climate change and defunding the police, there is little in Biden’s current agenda that appeals to the average voter outside of the core cities and college towns. Meanwhile, issues that suburbanites care deeply about, like improving performance of schools, boosting public safety and keeping energy and other prices down, are rarely talked about by Democrats.

Biden’s political strategy is difficult to make sense of. As Gallup notes, far more Americans are worried about inflation (18 per cent), the economy in general (13 per cent), poor government leadership (18 per cent) and gas prices (five per cent) than they are about climate change and the environment, which only two per cent of Americans consider to be the priority. Suburban voters are particularly concerned about things like the price of gasoline, as they tend to drive more. They also have a much lower tolerance for crime. In this regard, Democratic-controlled cities like Los Angeles, New York and San Francisco, with their ever-expanding homeless encampments and unsafe streets, do not look like promising neighbourhoods to suburban voters.

Certainly, the current political trends in the suburbs do not favour the Democrats. New polling from Harvard has found that 57 per cent of suburban voters are tilting to the GOP.

The first warning shot came from Republican Glenn Youngkin’s victory in Virginia’s gubernatorial election last year. Between 2015 and 2020, the Old Dominion was on track to become a deep-blue bastion, largely thanks to the affluent suburbs of Washington, DC. But when parents got wind of the woke indoctrination happening in local schools, Virginians turned against the Democrats. Even in the traditionally liberal Northern Virginia suburbs, Youngkin cut Trump’s vast deficit from 2020 in half. Overall, Youngkin gained roughly half of suburban voters – a big jump on the roughly 40 per cent that Trump won just a year earlier.

Youngkin’s approach also won over a larger percentage of those minority voters who are now flocking to the suburbs. He captured somewhere close to half the Latino and Asian voters in Virginia, outperforming Trump and past Republican candidates. And this is not only a Virginia phenomenon. Even in the California suburbs, shifts among these voters helped to flip two Orange County congressional seats to the Republicans in 2020.

The battle for suburbia runs in parallel to what may become the biggest divide in American politics in future: families vs the childless. Many Democrats praise the rise of ‘singleism’ – driven by women who are not having children. This cohort has more than doubled since 1976. Since 2007, the birthrate for women in their twenties has fallen by 28 per cent. Since 1960, the percentage of single-person households in the United States has grown from 13 per cent to 28 per cent in 2020.

This phenomenon is most common in big cities, where urban density discourages child-rearing. Unlike the wave of immigrants or rural migrants who flooded the American metropolises of the early 20th century, urbanites today generally avoid raising large families in cramped spaces. Instead, in virtually all high-income societies, high-density living today almost always translates into low marriage rates and low fertility rates. In urban cores like Manhattan, non-family households are a clear majority.

These largely urban, post-familial voters increasingly dominate Democratic politics and shape the party’s agenda. In general, the childless – or ‘childfree’, as some want to brand them – tend to hold more socially progressive views than those who are parents. Indeed, Democratic pollsters like Stan Greenberg hail single women as ‘the largest progressive voting bloc in the country’. And one leading political scientist has claimed that singletons are critical to the ‘emerging Democratic majority’.

The growth of green radicalism has also fostered an anti-natalist mindset in bourgeois circles. Many environmentalists disdain procreation and see each new baby as a contributor to the planetary apocalypse. Environmentalism has become what novelist Michael Crichton once called ‘the religion of choice for urban atheists’.

Yet even as childlessness is on the rise in the urban core, much of the US is still having babies. And according to the most recent census data, the highest fertility rates are almost all in red states such as South Dakota, Nebraska, North Dakota, Utah, Alaska and Idaho.

In contrast, the lowest birth rates are found in ultra-blue states like Vermont, Oregon, Massachusetts and, remarkably, California (once a major lure for families). Some of this reflects the policies that have been driving up house prices in these states more than elsewhere. Like other blue states, California’s policies discourage the single-family housing that most families want to live in.

Not surprisingly, California now suffers below-average birth rates, especially in cities like San Francisco, which has the lowest proportion of children of any major US city. Los Angeles County, the nation’s most populous county, epitomises these trends. From 2001 to 2021, LA’s population of over-65s grew by over half a million (59 per cent), while the population under the age of 25 shrank by nearly three quarters of a million (minus 19 per cent).

Once a magnet for young families, California now appeals predominately to single, childless people. This divide seems likely to deepen as the childless exert more influence, particularly among Democrats, while the Republicans target families. Again, Virginia suggests the Republicans could be on to a winning approach here: polls taken just before the 2021 gubernatorial election showed Glenn Youngkin beating Democrat Terry McAuliffe by 15 points among parents. Parents could be key to countering the Democrats’ popularity among singles.

In the short run, the Democratic appeal to the childless and unmarried could continue to reap rewards, while also driving their politics further to the left. The ranks of singletons will likely exercise greater influence on their cities and states, as families go elsewhere. This phenomenon will not fade quickly. After all, singles may not make families, but they can still be expected to live well into their eighties and nineties.

Over the medium and long term, however, the new demographics should favour red states, if the cultural agenda of the right does not get in the way. It is in the suburbs and exurbs, where families are creating the next generation, where the future lies. Until robots gain the right to vote, Democrats need to start appealing to families and suburbanites if they want to have any hope of capturing the future.