The ‘adults in the room’ are the scariest people in politics

The chattering-class meltdown over Boris confirms how unhinged the ‘expert class’ has become. 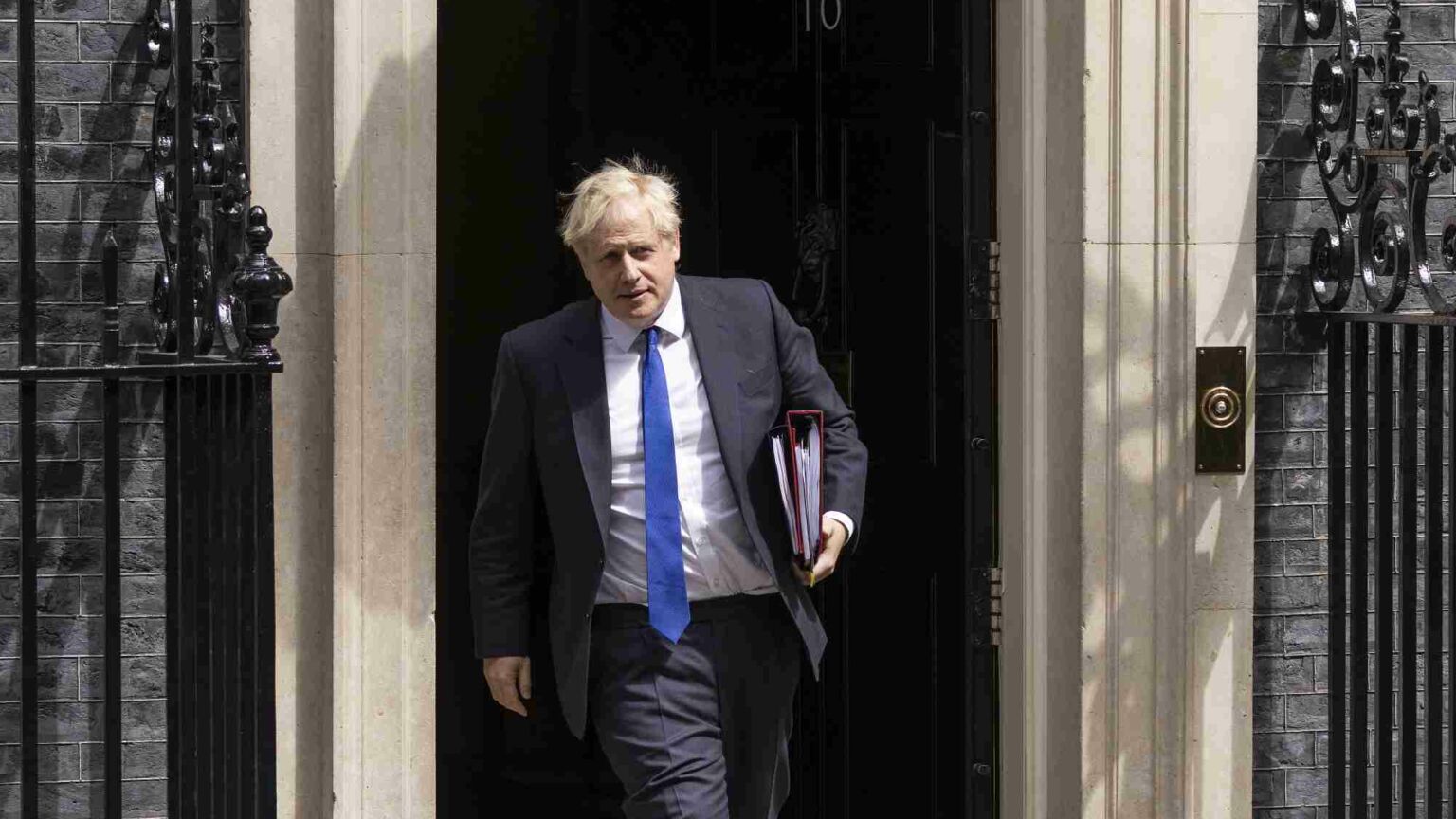 Is Boris Johnson the worst human being that ever lived? Boiled down to their essence, this is the question that all the hyperbolic, purple-prosed and at times outright deranged anti-Boris screeds have been asking over the past two weeks. Some in the commentariat have gone full boilerplate. They’ve thumbed their thesauruses for the most tawdry adjectives with which to describe this apparently uniquely awful man. He ‘plumbed the depths of degeneracy’, we’re told. His time in power was a ‘shabby carnival of misrule’. He ‘debased the great office of prime minister’. He’s ‘the worst prime minister in living memory’. He’s possibly ‘the worst PM in Britain’s history’. His was a government of ‘lackeys, losers, liars and lunatics’. I can’t be the only person who thinks such breathless alliteration – every hack worth his or her salt knows you don’t do alliteration – is more egregious than anything Boris did in Downing Street.

On and on it goes. Not just Boris-bashing – we’ve had that for years, and that’s fine – but genuinely manic outbursts. Ceaseless embellished nonsense. If I opened a newspaper tomorrow and saw the headline, ‘Was Boris worse than Genghis Khan?’, I swear I wouldn’t be surprised. Caroline Lucas, in green ink no doubt, says Boris and his cronies risked presiding over a ‘frightening descent into… fascism’. For me, the nadir came when Alastair Campbell said Boris is ‘the worst PM we’ve ever had’ (my emphasis). That’s big talk from a man who aided and abetted a PM whose warmongering killed hundreds of thousands of people. Eating a slice of birthday cake during lockdown vs plunging the Middle East into a fresh hell of war and terror… Campbell’s intervention really makes you think, doesn’t it?

We need a reckoning with this anti-Boris mania. Not to defend Boris per se – he’s big and ugly enough to defend himself – but because it tells us something important, and unsettling, about the state of the political class. We now know that the next PM will either be Rishi Sunak or Liz Truss, either a man celebrated for being a dull technocrat or a woman who lacks all the vital signs of a personality. Heaven help us. Also, not so fast. Before we move on to the post-Boris era, to finding out which of those robots will rule, we need to assess what just happened. We need to ask what the flowery fury of the chattering classes towards Boris tells us about the dangerous and increasingly out-of-control passions of the anti-populist elites.

I say we don’t need to defend Boris, but partly we do. We certainly need to say that his political style has nothing in common with fascism, and that the likes of Caroline Lucas and Mhairi Black who fling that f-word around with glib, ahistorical abandon are doing grave harm to the memory of actual fascism, and of the Holocaust itself. Imagine arguing that Boris was a uniquely immoral prime minister while doing something as immoral as milking the crimes of history to score a few political points and retweets in the present? We also need to point out that Boris was not the worst prime minister ever. By a long shot.

‘Worst PM’ commentary has been everywhere. ‘Boris Johnson is the worst prime minister of my lifetime, and I grew up under Thatcher’, says worst MP of my lifetime, Jess Phillips. Perhaps Ms Phillips could outline what Boris did that was as bad as Thatcher’s war on the striking miners? Or her sinking of the Belgrano, which caused 323 souls to perish? Or Hillsborough, a calamity that followed years of anti-football-fan demonisation by Thatcher and others? Boris failing to do something about a Tory whip who had a penchant for touching blokes’ bums doesn’t really compare to war crimes and class war, does it?

Media outlets have sent out their reporters to ask the public, ‘Is Boris the worst PM ever?’. (I appreciated the response of one passer-by to this daftest of questions: ‘No, he’s not even close… Tony Blair immediately comes to mind.’) This is a country that has had PMs who presided over massacres of working-class protesters who only wanted the vote (Lord Liverpool), over the starvation of a million Irish people (Sir Robert Peel), over the violent destabilisation of North Africa and a corresponding rise in war, terror and reckless, often lethal waves of migration (David Cameron, with his Libya disaster). And yet we’re asked to ponder whether a man who had a glass of wine in the Downing Street garden, and who messed up on Covid (as did every leader around the world), and who once said ‘tank-topped bumboys’ is the worst PM ever. It’s mad.

It’s revealing, too, for it suggests that the delirium over Boris isn’t really about anything specific that Boris did. Deep down, everyone, even the most online #FBPE clowns, even radicals whose chief contribution to public debate is the phrase ‘Tory scum’, even Steve Bray, knows that there have been bad PMs in the past and that some of them did far worse things than tell a few porkies or hide in a fridge. No, the anti-Boris fever that infects large swathes of the chattering class is not about anything as tangible as policy, or history, or even reality. Rather, it expresses a deeper, more visceral disgust within the elites for what Boris is seen to represent – that is, ordinary people’s desire to shake up the technocratic establishment and to secure a little more democratic clout for themselves.

One of the most striking things about the Borisphobia that has spread like a malady in elite circles is its ahistorical nature. To say ‘Boris is the worst PM ever’ is to declare, sans shame, that you have little concern for history. That you are so swept up in the now, in super recent political events, that you have lost sight of the fact that the past exists and that it is pock-marked with bad rule and objectionable policy. This hyper-presentism of the Boris-loathers is not born of ignorance – many of these people are very well educated. Rather, it springs from the combination of narcissism and irrationalism that motors their dread of Boris, and of the little people who voted for him. Convinced they have a God-given right to shape politics, and concerned that this right has been upended by recent democratic developments, these people end up in an existential freakout that views everything that is happening right this minute in the most intense fashion imaginable, as the Worst Thing Ever, as the be-all and end-all. Their anti-Boris fury is more about what they feel they have lost than it is about Boris himself.

It is the instability, the outright unreason, of the anti-Boris frenzy that is most concerning. The hyperbole, the ahistoricism, even the use of alliteration and other forms of purple nonsense in the supposedly serious media all point to the viscera of this moment, to the disarray of the elites in the post-Brexit era. They accused us, the Brexit-backing masses, of allowing our passions to overrule our reason, but it is now clear that that is far truer of them. So enraged are they by the populist revolt against technocracy that they have abandoned rational forms of discussion, historical reason and truth itself in their efforts to reassert their authority over society. The self-styled ‘adults in the room’, the supposedly measured technocrats, have exposed how rash and dangerous they can be when their power and ‘expertise’ is challenged by the throng. And make no mistake – to them, Boris is the emblem of the throng. He’s the charlatan who gives expression to the charlatanism of the masses. It’s Boris they bash, but it’s us they loathe.

This is why the meltdown over Boris matters. Because it confirms that the anti-populist elites embody the very vices they claim to hate. They’re unstable, unpredictable, demagogic and self-serving. It also confirms that, whoever takes over as PM, whether it’s washy Rishi or embalmed Liz, there will remain an influential section of society that will never tolerate any political idea or style that threatens the grip of elite consensus opinion over society. The media and cultural elites have shown just how much they are prepared to sacrifice – logic, objectivity, historical truth – in the cause of defending their patch. Perhaps it’s time we showed how hardcore we are prepared to be in the name of defending the promise of Brexit and democracy. Yes, we don’t need to defend Boris – we need to defend ourselves.