Sri Lanka and the global revolt against the laptop elites

From Sri Lanka to the Netherlands, Albania to Canada, the masses are stirring. 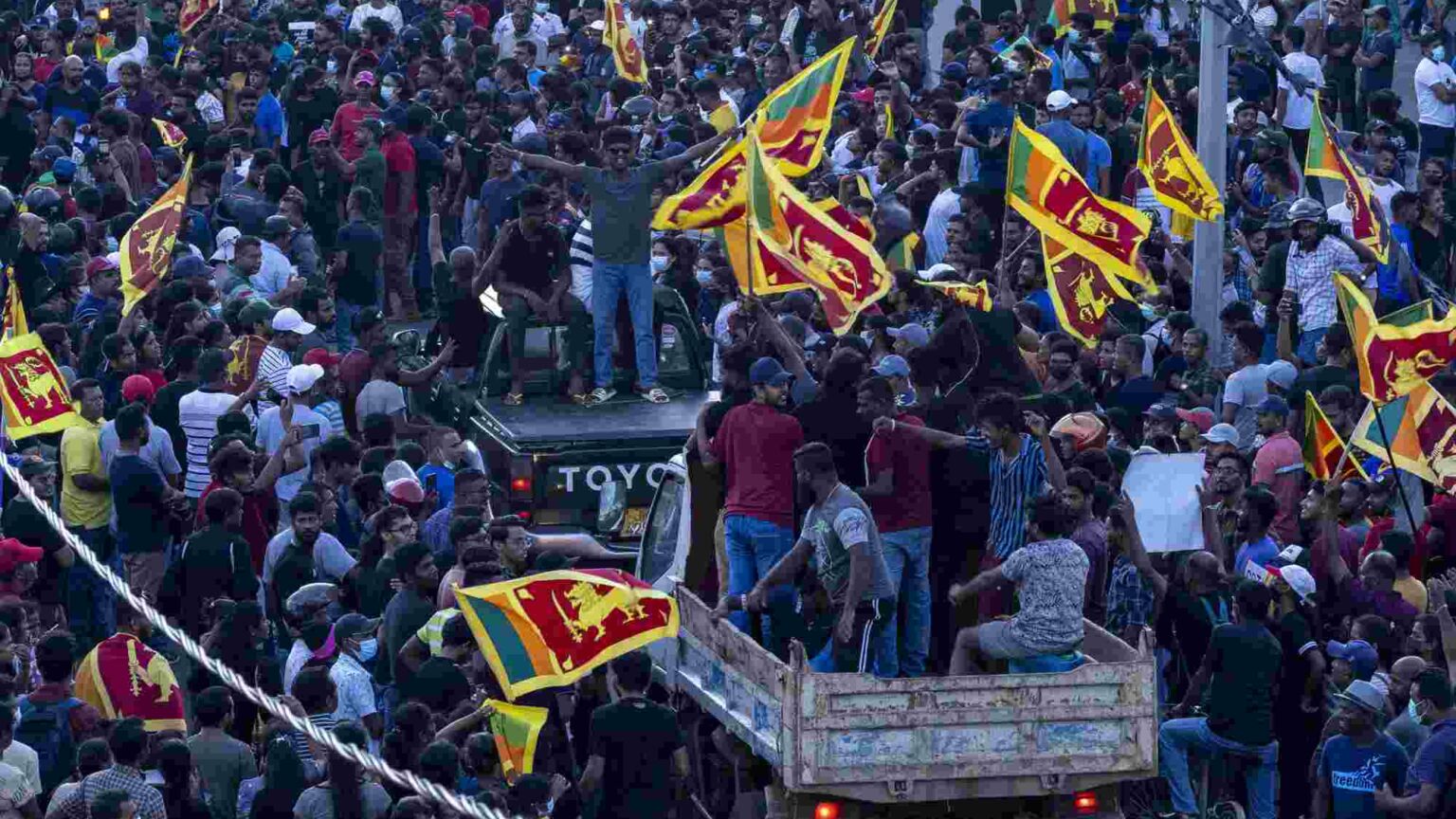 Some in the West are relishing the images of revolt coming out of Sri Lanka. Tweeters and leftists are marvelling at the footage and photos showing angry Sri Lankans storming the presidential palace and having a dip in its ornate pool. The imagery is indeed striking, and heartening: it’s always good to see people pushing back against their inept, corrupt rulers.

And yet these Western observers might soon be in for a surprise, for this revolt is not only an indictment of the Sri Lankan elites and their legion errors of judgement. It is also an indictment of the conceits of the global elites more broadly. It calls into question the prejudices and policies of global establishments in thrall to climate-change alarmism and Covid authoritarianism. In Sri Lanka we are witnessing a rebellion not only against corrupt government officials, but also against the dangerously out-of-touch worldview of the international technocracy.

Sri Lanka’s economic crisis is incredibly serious. The nation is bankrupt. Inflation is rampant. Food prices have risen by 80 per cent. Last month petrol prices rose by 24 per cent, diesel prices by 38 per cent. At the end of June the government announced that petrol supplies were almost at an end – it banned the sale of petrol except for essential services, essentially making driving illegal. People cannot make ends meet. Over the past year, half a million Sri Lankans have been plunged back into poverty. The UN says more than three-quarters of the population have reduced their consumption of food due to the severe food shortages.

It’s little wonder there have been months of rebellion. And huge political tumult, too, including the resignation of the cabinet in April; the resignation of the prime minister, Mahinda Rajapaksa, in May; and the fleeing of the president – Rajapaksa’s brother, Gotabaya – at the weekend. President Rajapaksa was spirited away by the army shortly before the people stormed his compound. Those images of struggling Sri Lankans lying back on luxury sofas in a palace abandoned by the petrified ruling class might just be the most iconic proof yet that a global revolt of angry working people is well and truly brewing.

The crisis in Sri Lanka is multi-faceted, for sure. But there are two important contributory factors we should be talking about. First there’s the impact of the global Covid lockdowns. They shattered Sri Lanka’s tourism industry. Tourism raked in $4.4 billion for Sri Lanka in 2018, making up 5.6 per cent of its GDP. In 2020 tourism contributed just 0.8 per cent to GDP. And things did not improve in 2021, as they had been expected to.

More importantly, the global shutdowns, and the restrictions on production and trade they entailed, impacted on Sri Lanka’s supplies of food and essentials, too. As one report says, the ‘economic turmoil and human misery’ in Sri Lanka are partially a consequence of the ‘economic fallout of the Covid-19 pandemic’. The drastic slowing down of global economic output has stored up dire consequences for poorer parts of the world. The UN Food and Agriculture Organisation says the number of people affected by hunger has risen by an astonishing 150million since the start of the pandemic. It is estimated that the inflationary consequences of mankind’s self-imposed economic torpor during the pandemic have dragged tens of millions of people around the world back into poverty.

So perhaps those who predicted that the lockdown’s unprecedented halt on economic activity would prove devastating for the less developed countries were right. Perhaps they should not have been denounced as granny-killers and No Platformed from social media after all. Perhaps we should have thought carefully, and talked seriously, about the potential consequences of suspending economic life before taking such rash, experimental action.

The other facet of Sri Lanka’s crisis we must confront is the role played by eco-ideology. It is unquestionable that Sri Lanka’s suffering has been inflamed and exacerbated by its determination to become a Net Zero nation. A nation of fertiliser-free farming. A ‘good’ environmentally responsible nation that will please the green elites in global institutions. Sri Lanka’s severe green policies have had a devastating impact on food production and on its key export industries, worsening its crisis of inflation.

In April last year, the Sri Lankan government banned the import of chemical fertilisers and pesticides. Its aim was to encourage organic farming. This was a borderline psychotic policy – 90 per cent of Sri Lanka’s farmers use fertilisers, and they predicted, rightly, that their crop yield would diminish in the absence of these modern substances. The production of rice, tea and rubber was seriously undermined by the ideological rush to organic.

Try to take this in. In 2019 Sri Lanka produced 3.5 billion kilograms of rice. In 2021, following the fertiliser ban, it is thought that rice production fell by 43 per cent. Self-imposed hunger, to appease the gods of environmentalism. Seventy per cent of Sri Lanka’s population of 22million are directly or indirectly dependent on agriculture, so the severe changes to farming predictably had severe consequences across society. They contributed to inflation hitting a 47-month high – 8.3 per cent – towards the end of last year, with food inflation reaching 11.7 per cent. The fertiliser ban was reversed in November, when its horrible impact became clear, but by then it was too late. ‘[Crop] yields may not rebound’, reported Reuters, which turned out to be right.

As with the global lockdown’s dire impact on Sri Lanka, these deranged and damaging green policies will feel to many Sri Lankans like an external imposition, something pushed on their nation by global institutions and global decisions. Yes, Sri Lanka’s own political elite feverishly embraced the organic lunacy. But as Michael Shellenberger points out, the World Economic Forum promoted organic in Sri Lanka. Many elite campaigners in the West advocated for Sri Lanka to move to full organic, some of them supported by funds from ostentatiously eco-friendly corporations like Google, Disney and JPMorgan.

If I were a Sri Lankan farmer, watching my yield deplete, seeing prices sky-rocket, seeing fuel and food running out, I would be angry primarily with my government, yes. But I would save some of my fury for the world’s influential eco-elites, who seem to view the developing world as a site for environmental experimentation rather than as a part of the world that needs more industrialisation and growth in order that it might enjoy economic equality with us in the West.

Sri Lanka shows us what happens when policy is shaped according to the desires and prejudices of the new elites rather than the needs of ordinary people. Lockdown may have been a boon for the laptop elites and for some billionaires, but it was incredibly harmful for many working-class people in the West and for millions of hard-up people in the global South. The green ideology may provide the new elites with a sense of purpose, flattering their narcissistic delusion that they are saving the planet from a man-made heat death, but it hits the pockets of workers in the West who will end up paying for the Net Zero madness, and it inflames hunger and destitution in those parts of the world not yet as developed as the West.

In Sri Lanka, we see an extreme and unsettling case study of what happens when global policy is built on the fear and narcissism of disconnected elites, rather than being informed by the question of what people need in order to flourish and become wealthier. Also in Sri Lanka we see exactly the kind of pushback we need against all this. The people have had enough. And they are not alone.

From the Canadian truckers who revolted against livelihood-destroying Covid rules to the Dutch farmers rising up against their government’s mad eco-policies, from Italian taxi drivers protesting against the rise in fuel prices to the mass protests in Albania against food and fuel price rises following the lockdown and the war in Ukraine, popular protests are breaking out across the world. The government of Sri Lanka may have been the first to fall, but it seems unlikely it will be the last.

The uprisings are inchoate. Some are leaderless. The demands are not always clear. But it’s obvious what people are generally angry about – the irrational decision-making practices of a new class of political rulers who prefer quick-fix clampdowns and displays of virtue over the tough task of working out how to materially and spiritually improve people’s lives. Those who think populism is over now that Trump and even Boris Johnson have gone are in for a shock. Wake up. Look out your windows. Check your swimming pools.