The return of Covid is nothing to fear

The worst thing we could do right now is impose new restrictions. 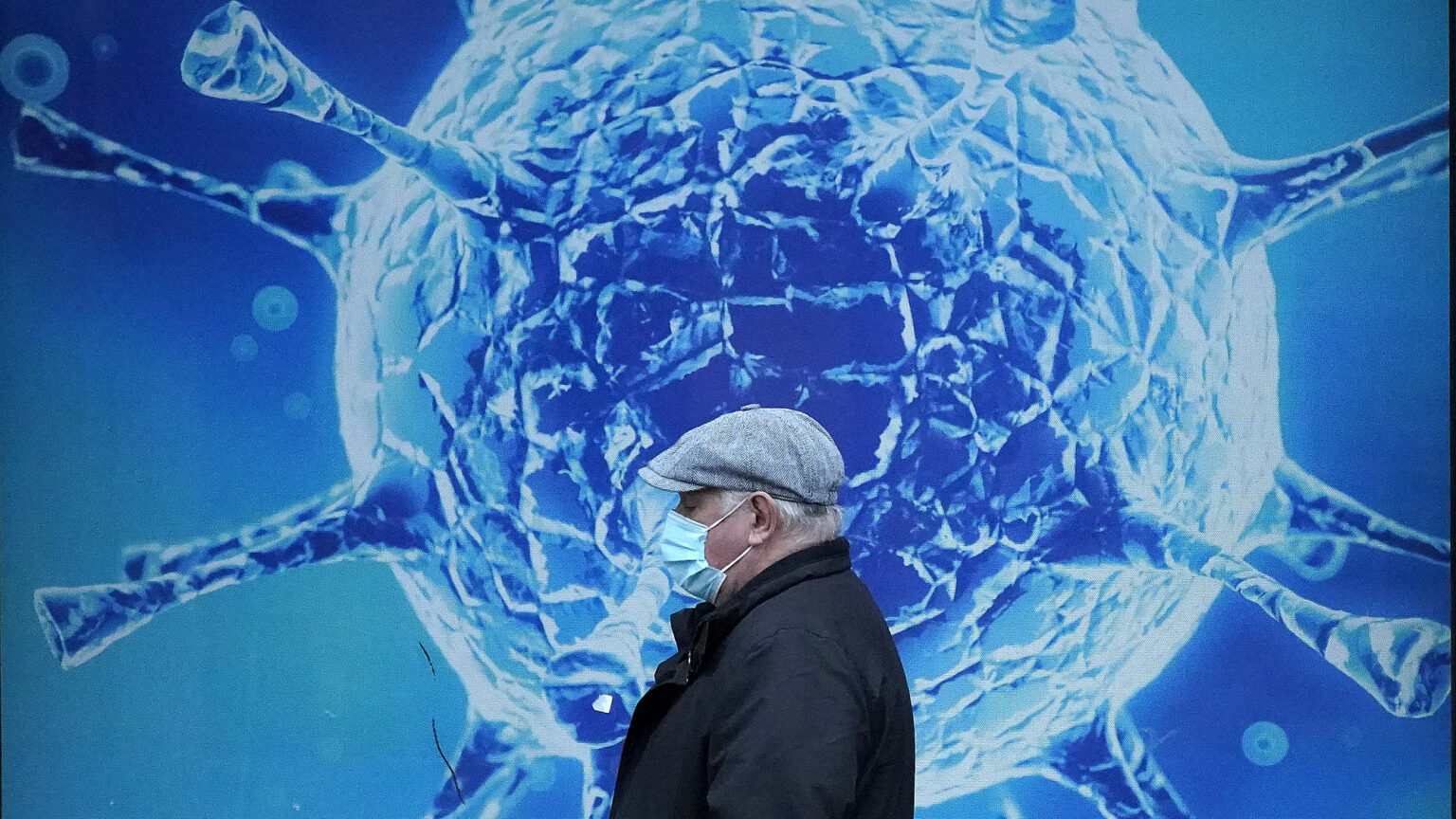 Covid is on the rise again. It is hard to come up with the exact numbers because the government has – rightly – dismantled Test and Trace. However, modelling from the Office for National Statistics (ONS) suggests that around 2.7million of us are now infected – one in 25 in England and one in 17 in Scotland. These rates are more than double those of mid-May. And we are not alone. France is recording around 119,000 cases daily, compared with 20,000 in early June. This resurgence reflects the spread of Omicron subvariants BA.4 and BA.5, which now dominate worldwide. These subvariants are more transmissible and vaccine-evasive than their progenitor, though no more lethal.

Inevitably, large parts of the media are now calling for renewed interventions – principally masks. These interventions will have consequences. Holidays may be spoilt by masks, testing or vaccination requirements – Cyprus, for instance, has just restored its indoor-mask requirement. And an autumn booster campaign is a given. All of which prompts two questions: First, why has the effort to suppress SARS-CoV-2 failed? And, second, are new restrictions warranted?

The answer to the first question lies in the delusion that took hold in 2020. Those in positions of power believed that they could halt a respiratory pandemic through societal interventions. This ran counter to previous experience and beliefs. Historical respiratory pandemics – including the ‘Russian Flu’ of 1889-94, the ‘Spanish Flu’ of 1918-19, and the flu outbreaks of 1957-58 and 1968-69 – were allowed to run their course. Pre-Covid planning by Public Health England (2011) and the World Health Organisation (2019) anticipated that, next time, we would need to be similarly stoical. They recommended that life should be allowed to continue as normally as possible, with minimal panic. Neither agency advocated lockdowns or travel bans, and both were sceptical about the efficacy of masks for the uninfected.

Yet, in March 2020, all this planning and experience were discarded. It was enough that China asserted that lockdowns worked and that Neil Ferguson, then an adviser to the UK government, calculated that non-pharmaceutical interventions (NPIs) could reduce deaths from 500,000 to 20,000. Without NPIs, the government stated, the NHS would be overwhelmed.

And, so from March 2020 onwards, the government imposed a whole range of NPIs, from lockdowns and masks, to Test and Trace and fines for non-compliance. The expectation was that NPIs should cut transmission by reducing human contacts. And any failure to cut transmission should be interpreted as a failure of public compliance. Hence the authorities were empowered to enforce the rules, while critics of the government’s approach were publicly denigrated and demonised.

The consequences of this approach, aside from the resurgent virus, have been severe. Half a trillion pounds were magicked up through quantitative easing and then blown to the wind, driving inflation up long before Putin invaded Ukraine. Test and Trace swallowed £30 billion, without benefit. Unusable personal protective equipment (PPE) cost a cool £8.7 billion. And benefit fraud accounted for a further £10.1 billion.

The social costs of lockdowns and other NPIs are arguably greater still. Pre-school children have been left unsocialised and unadapted to other common viruses. Older children have had their educations disrupted and degraded. And many adults have lost their habit of work.

In part, this approach to Covid reflects a deficient understanding of virology. SAGE’s modellers did not account for the virus changing to become more transmissible or vaccine-evasive, nor did they consider that NPIs might favour this evolution. Next, they wrongly assumed that vaccines, once they came, would confer lasting protection, forgetting the brevity of natural immunity to classical common-cold coronaviruses. Lastly, Covid was viewed too much in isolation, and not as one piece in a public-health jigsaw, which led to the neglect of non-Covid health issues.

The results have been grim. Non-Covid excess deaths in England and Wales now exceed 1,500 per week (around 15 per cent higher than expected), often occurring at home. And 117,000 citizens have already died on the NHS’s several million-long waiting lists, which is equivalent to two-thirds of Covid’s 180,000 death toll.

All this should tell us that the best way to respond to the rising tide of Covid cases right now is to do… nothing. It took the 1889-94 ‘Russian Flu’ – which was possibly caused by coronavirus OC43 or 229E rather than influenza – five years to ‘bed-in’ and to stop causing spikes of infection. It may take SARS-CoV-2 a longer or shorter amount of time to do something similar. But that ‘bedding in’ is what is now happening and what is meant by ‘living with Covid’. Most of us will go a round or two with the virus over the coming years. Any ‘successful’ attempt to slow its circulation will merely drag the process out.

Accordingly, there is no merit in a return to masking. Three lines of evidence tell me that masks offer virtually no protection. First, 12 pre-Covid trials showed no convincing protection against respiratory viruses, albeit with comparisons confounded by different mask types. Secondly, the DANMASK trial, undertaken during the pandemic, showed no statistically significant benefit to mask wearing. And thirdly, the introduction of national mask mandates has nowhere reversed a rising Covid trend. The virus is aerosol-borne and aerosols flow around the sides of a surgical mask, and can also pass though a mask, as they are smaller than a mask’s pores. Tight-fitting N95 masks should be more protective, according to laboratory tests. But they are uncomfortable and, where mandated – for example, in Bavaria – have been no more successful in reversing a rising tide of Covid infections than other mask types.

And what of vaccine-booster programmes? Whether and when to have them should be a personal decision, based on age, risk factors and preference. My take is that a 70-year-old is unwise not to be vaccinated and boosted, but that there’s no good reason to vaccinate a healthy five- to 15-year-old. Somewhere between the extremes of young and old, there is a tipping point.

Vaccination, though, is for personal protection against severe infection, not for the protection of others. Present vaccines are not sufficiently effective against infection and transmission to be the basis of mandates, irrespective of the ethics of mandates in general. Efficacy against Omicron falls to 15 per cent within three months of a booster.

Not that this has stopped nations introducing vaccine-mandate measures. The Netherlands demands that visitors have been vaccinated or boosted within 270 days of their visit, and the US insists that visitors have had two shots, though it doesn’t matter how long ago. Neither restriction has logic, and both should be rescinded.

Our forebears, sweating the Russian Flu (or coronavirus) of 1889-94, were more ignorant than us. They lacked vaccines or antivirals – viruses were not to be isolated for another 40 years. Some misattributed the Russian Flu pandemic to a bacterium, Haemophilus influenzae, and others blamed a miasma, not a contagion. Yet, in a way, they were wiser, understanding that a pandemic was largely beyond their control and must be endured. They also benefitted from governments which, constrained by the gold standard, could attempt nothing so financially or socially destructive as the seat-of-the-pants experiment of the past two years.

If we have learnt anything during the pandemic, it’s that lockdowns and many other interventions were a terrible mistake.