The sinister nothingness of the anti-Boris rebellion

The manner of Boris’s toppling speaks volumes about the death of politics. 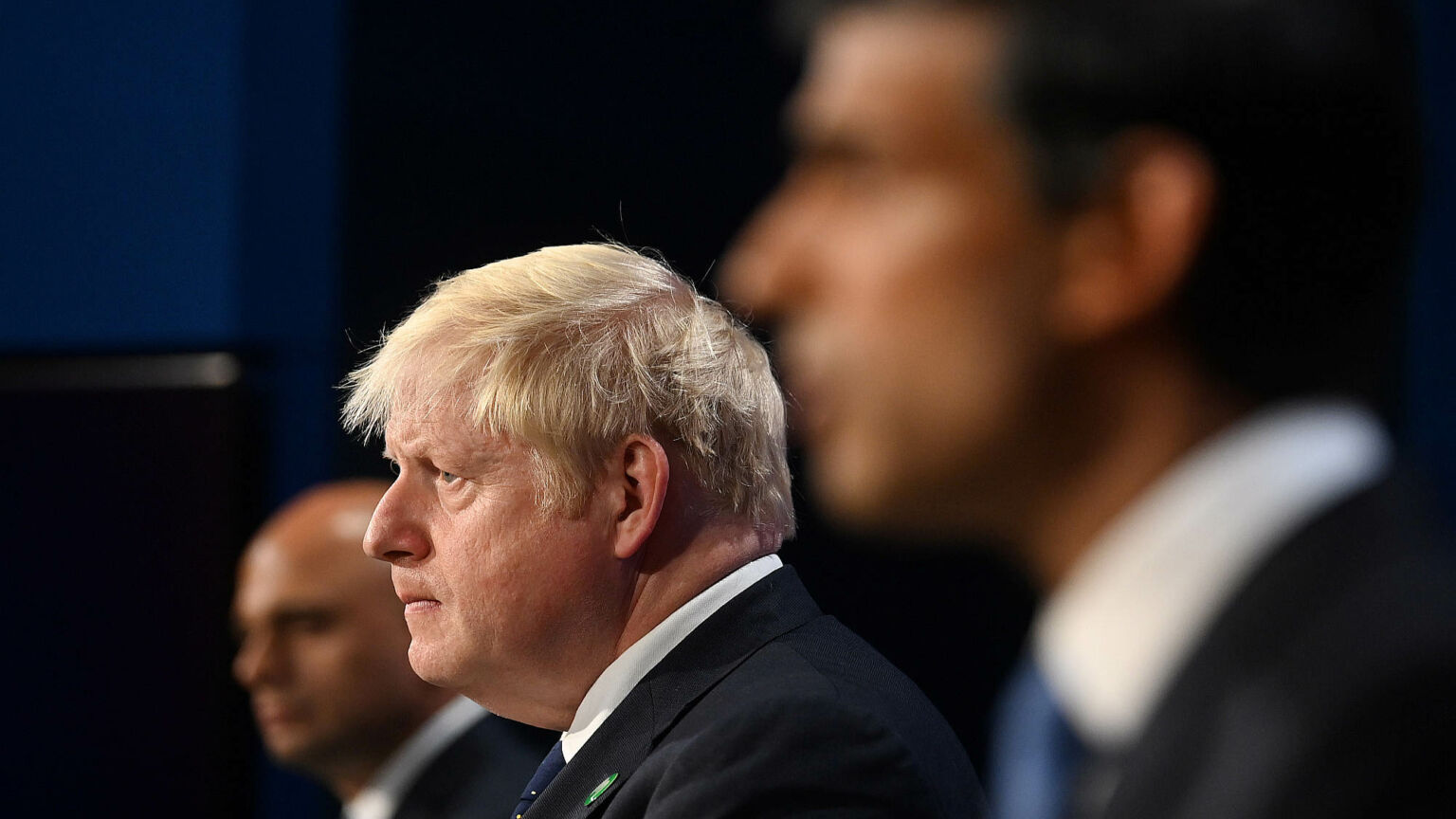 I know we were all meant to feel disdain and even outrage over Boris Johnson’s initial refusal to leave Downing Street. Who does he think he is, the media elites cried in unison, oafishly ensconcing himself in the seat of power even as his heroic assassins wielded their metaphorical knives. I, alas, was too busy feeling disdain – and, yes, a little outrage – over the assassins themselves. There has surely never been such a wet, amateurish, self-serving uprising against a PM. Such a lame, hollow and pointless move on power. Such a conceited instance of politicians covering their own backsides and then having the gall to dress it up in the finery of a tyrannicide enacted for the good of the nation. The manner of Boris’s toppling offended me far more than anything Boris did.

As each Poundshop Brutus came forward, waving his or her letter of resignation written by an AI bot that had been force-fed every HR manual in the land, I knew this was no normal factional revolt. In fact, perhaps I should take back the word ‘wet’, for this disparate blob of Boris-despatchers made the old ‘Tory wets’ look like the best-organised rebellion in history in comparison. ‘Wets’ was the name Thatcher famously gave to what she viewed as the softies in the more moderate wing of the Conservative Party who bristled at her hardline policies. And those ‘wets’ were a proper party faction. A group with ideas. A group that plotted and manoeuvred for ideological reasons. Indeed, factions throughout history, from the men who slayed Caesar over his authoritarian tendencies to the Ian Gilmours and Michael Heseltines of the wet set that poked at Thatcher (yep, Heseltine’s been wet his whole life), existed for a fundamentally political purpose. The same cannot be said of the men and women who brought down Boris. This was more a herd than a faction, more a soirée of concerned individuals than a political revolt.

It is the nothingness of the anti-Boris rebellion that unnerves me. Some say it is a Remainer plot, the revenge of Tory Europhiles determined to drag our nation back to Brussels. But it clearly isn’t that. Part of me – despite my devotion to Brexit – wishes it was, for at least then we’d know what we are up against. No political declaration has been forthcoming from this group that took down the PM. No statement of ideals. No commentary on politics or policy at all. Do they even know why they did what they did? Did they ever meet up to plot the takedown? Have they even met each other in real life? I’m just not convinced that the trade envoy to Morocco has ever got together with the parliamentary under-secretary of state for safeguarding – two of the noisy resignees – to make plans for a post-Boris Britain.

Many people are laughing and scoffing at Rishi Sunak and Sajid Javid for saying it was a coincidence that they resigned within minutes of each other. ‘They hadn’t talked about it. Nothing had been planned. It just happened’, as one columnist derisively summed it up. But you know what? I believe them. I believe it is entirely possible that these two men were just doing their own thing. I mean, Sunak and Javid might go to see Star Wars movies together but they are hardly known for being an ideological double act, for being the Brutus and Longinus of the Boris era. It speaks volumes about the vapid, almost accidental nature of Boris’s toppling that it was possibly triggered by two cabinet ministers coincidentally press-releasing their resignations within minutes of each other.

What we are witnessing right now is the impossibility of factional politics in a post-political era. For me, the most remarkable thing about the fall of Boris is that each of the ‘rebels’ seems to be his or her own faction. Welcome to the era of the individual as faction. We’ve all heard of the sociological idea of ‘the lonely crowd’. Well, this was ‘the lonely faction’. A group in appearance only, made up of disconnected individuals concerned primarily for themselves rather than for the pursuit of some factional goal. This is why there was almost a herd mentality following the Sunak and Javid resignations, as others in and around government wondered to themselves: ‘Is this an opportunity for me too?’ ‘Me’ being the operative word. The deathly, wearying sameness of all their letters of resignation – if I hear the words ‘integrity’, ‘competence’ and ‘trust’ one more time this week, I’m losing it – should not be mistaken for unity or collectivism. On the contrary, the very hollowness of these letters, their very blandness, their promiscuous use of the ashen language of the HR department, speaks precisely to the absence of political depth and factional seriousness in this fortuitous push against Boris.

In fact, the letters reveal how dominant individual personality has become in the formerly political realm. Each resignee essentially said ‘I have integrity and Boris does not’. It was all ‘Behold my favourable character’, rather than ‘This is what I and my political group will do once we seize power’. The obsessive focus on integrity has become a substitute – and a very lame one at that – for speaking about policy, about ideas, about what the nation might need. We know little of what this group thinks about Brexit, sovereignty, borders, the lockdowns, the woke assault on liberty and virtue, and whether a woman can have a goddamn penis, because they have said virtually nothing on these matters that cut to the heart of the governance and future of our country and our institutions. Instead they said ‘I am competent’, like a middle manager making his case to HR that he should be trusted to chair the weekly staff meeting. Boris’s behaviour in recent days indicts primarily himself; the behaviour of his topplers indicts the entire political class because it exposes its flimsiness, its flight from ideology, and its treatment of politics as a site of self-advancement rather than as a vocation.

This is why scandal – or at least what passes for scandal these days – played such an important role in Boris’s downfall. Partygate, with its 10-minute-long consumption of a birthday cake in Downing Street during lockdown, and Pinchergate, in which former deputy chief whip Chris Pincher stands accused of having occasionally patted the buttocks of young men, are hardly Watergate or the Profumo Affair. But they were central to the flurry of resignations masquerading as a factional revolt because scandal now provides one of the few means, one of the only languages, through which manoeuvres can be made in the political sphere. In the absence of ideological conviction and political contestation, accusations of unethical behaviour are the last remaining way to hurt one’s opponent and benefit oneself. So the lonely faction says little on lockdown, the economy or freedom and instead screws up its face at Boris’s failures to deal with Chris Pincher’s wandering hands. When belief and depth vacate politics, all that remains are court-like whispers and denunciations, all of it utterly unbecoming of the democratic era.

But just because the push against Boris had no leader and no decipherable purpose does not mean it wasn’t orchestrated. This is where we come to the most chilling feature of this strangest of political takedowns – the role played by the media. As the old public realm has been denuded of structure and ideas, so the media have come to play an outsized part in shaping political discussion and even determining politicians’ fortunes. The media unquestionably stoked the anti-Boris revolt. First by blowing those daft scandals out of proportion, unilaterally decreeing that they were the most important issues in the land. And secondly by goading, subtly and perhaps only semi-consciously, each of the actors in the lonely faction.

Indeed, the rebels’ letters of resignation were primarily aimed at the media. They were for the BBC and the Guardian and social media, not for us in the now broken and disregarded realm of what used to be called public life. This is why they all first appeared on Twitter – where else? – and why they were written in such media-speak. Because the audience was the media elites, not the people. A clear symbiotic relationship has now developed between an isolated political class searching for a new public realm in which to execute its business and a media that can sniff the power it accidentally enjoys in the post-party, post-ideological age. Call me old-fashioned, but I see little positive in the removal of a PM voted into power by 14million citizens by disparate aggrieved Tory actors and a media establishment that understands us even less than politicians do.

‘Après moi, le déluge’, said Louis XV. Boris is well within his rights to say, ‘Après moi, rien’. Did he have to go? Probably. Over cake and slapped arses? Absolutely not. In cheering Boris’s demise the left is being incredibly short-sighted. For what we’re witnessing is not really a political event but the further unravelling of political life. The further corrosion of the public sphere. And the further empowerment of isolated technocrats and media operators. Boris’s government ran out of steam, for sure, but the lonely faction that pushed Boris out doesn’t even have steam. It is more a void than a blob, more a manifestation of the end of politics than a political movement. Right now, steam, momentum exist only in the populist masses, among those who, through discussion and determination, made Brexit happen and now want wokeness taken down. It might be time for populism to assert itself again, against both the exhausted Boris clique and the sinister nothingness of its replacement. If there is hope, we know where it lies.