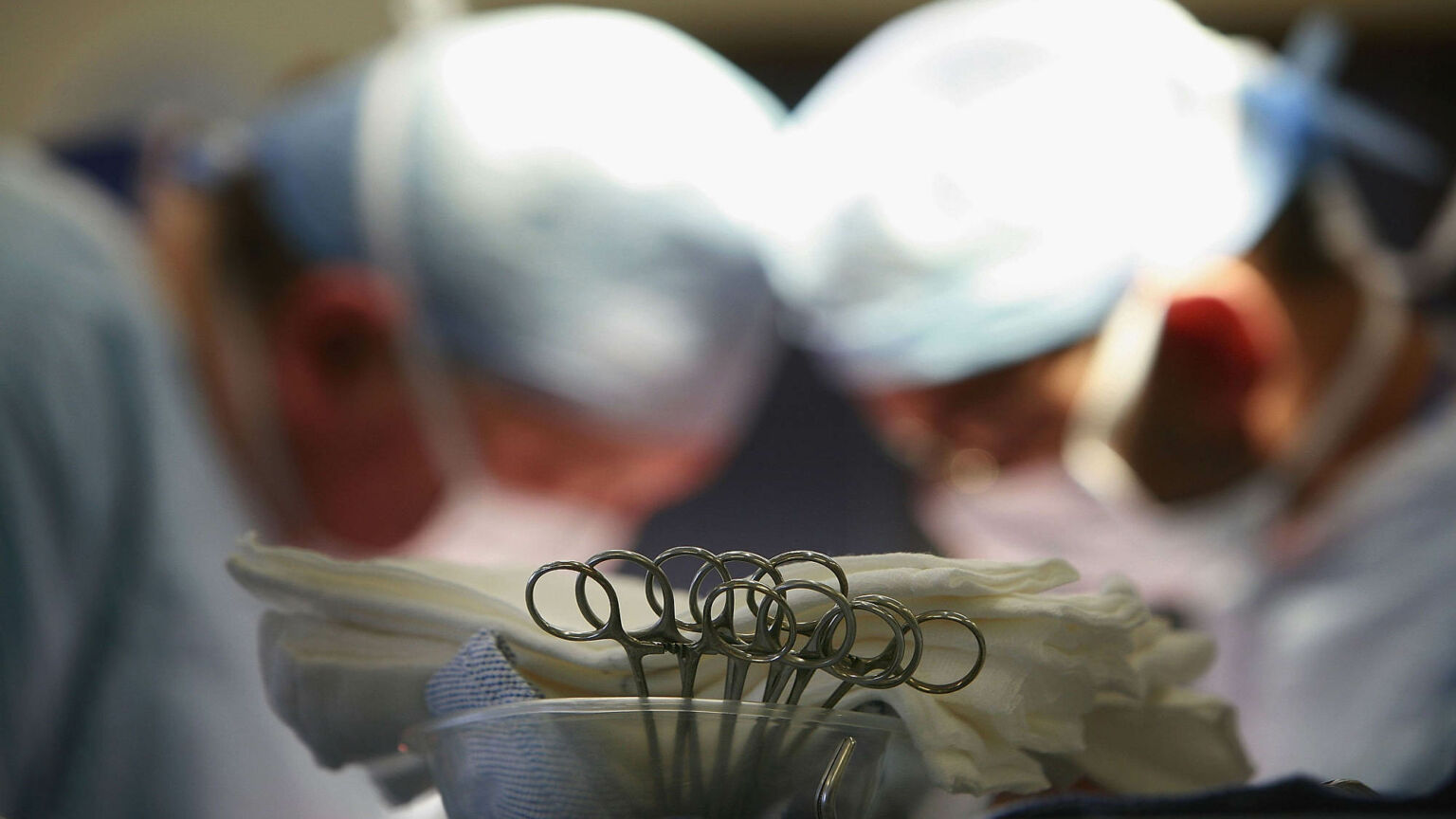 There is a question about body modification among the young that nobody wants to ask, let alone try to answer. But it’s time we put it out there. Why is it ‘mutilation’ when a young woman’s vagina is cut for religious reasons, but ‘affirmation’ when it is done for trans reasons? Why do we balk in horror at the ritualistic removal of parts of the outer vagina in young women in certain countries in Africa, but we cheer ‘bottom surgery’ as a form of ‘trans healthcare’ in the West? We need a reckoning with this moral disparity in how we view the ideological alteration of women’s bodies. We live in a world in which you can be arrested for subjecting your daughter to body modification for Islamic reasons but you will become a star on TikTok for allowing your daughter to have her breasts removed for gender-affirmation reasons. And we need to talk about that.

The issue of ‘mutilation’ – a word nobody wants to use, I know – was recently forced into the light by Katherine Deves. She was a candidate for the Liberal Party in the federal elections in Australia last month. She didn’t win her seat. In the run-up to the election she caused a storm by using the m-word in relation to trans surgery. People uncovered old social-media posts from Ms Deves in which she said trans kids are ‘surgically mutilated and sterilised’. She posted photos of young girls who have undergone double mastectomies in the belief that they are boys, describing it as a ‘complete failure of safeguarding’ that healthy young women are having their breasts removed. Strikingly, Ms Deves did not back down. She admitted her language had ‘on occasion been unacceptable’, but she said she will continue raising questions about the fad for severe body modification in the name of transgenderism. As for her use of the m-word, which so rattled Australia’s chattering class, Deves said ‘it’s very emotive, it’s very confronting and it’s very ugly’, but it’s ‘the correct medico-legal term’ for some things that happen under the trans banner.

Scott Morrison, the leader of the Liberal Party and PM until he was ousted in the May election, responded coolly to the fury over Deves’ comments. He said he would not use the term mutilation himself, but ‘gender-reversal surgery for young adolescents’ is a ‘significant issue’ that some parents are ‘very concerned’ about. Boris Johnson and Keir Starmer could take a leaf from Morrison’s book: let your politicians speak honestly about trans issues. Not everything Deves says is admirable. Far from it. She compared her opposition to trans ideology to those who opposed the Nazis, which is disgraceful. She said she speaks out on trans issues because she doesn’t want to be like one of those mid-20th-century Europeans who ‘stayed quiet when the trains went past’. This was rightly condemned by the New South Wales Jewish Board of Deputies as ‘hyperbole’ that ‘trivialises the depth of inhumanity’ reached by the Nazis. However, it was not Deves’ offensive Nazi comments that outraged Australia’s woke elites – it was the fact that she dared to question the ‘mutilation’ of young women who wrongly believe that they are male.

This is something we need to discuss, however offensive activists find it, however many screeches of ‘bigot’ are thrown our way. Some in Australia’s leftish media pointed out to Deves and Morrison that people under the age of 18 cannot actually have ‘gender-reversal’ surgery. That is, they cannot have their genitals altered. That’s true, but girls under 18 can have a double mastectomy if their doctor and their parents give permission. And they can be prescribed puberty blockers and cross-sex hormones, as also happens in the UK (following the Court of Appeal’s overturning of the Keira Bell ruling) and in other countries. So in Australia, and elsewhere, an adolescent girl can have her breasts removed and she can receive medication that will induce ‘male’ biological traits – such as a moustache – and, at some point, infertility. Can we call this mutilation? If not, why not?

Mutilation is not a nice word, we can all agree on that. But we use it all the time. What was once known as ‘female circumcision’ is now described as female genital mutilation, given it involves the severe, irreversible alteration of a young woman’s genitals. ‘Are breast implants a form of mutilation?’, observers ask about plastic-surgery procedures. The disturbing modern trend for arm-cutting among teenagers has been referred to as a form of self-mutilation. So it is widely recognised that some forms of body modification can legitimately be described as mutilation, especially those that have no health benefits, and which may change a person’s life for the worse. So why is it verboten to say the m-word in relation to trans surgery? Why must you switch from saying ‘mutilation’ to ‘affirmation’ if a woman’s breasts or genitals are radically altered for trans purposes rather than Islamic purposes?

This all speaks to the severe policing of the discussion around transgenderism. There are some things you just cannot say on this issue. Calling trans surgery ‘mutilation’ is top of the list. But even those who opt not to use that word can find themselves reprimanded for other speechcrimes, from referring to born males as men to questioning the rationality of saying they / them about one person. In fact, not only are people severely chastised if they say the wrong thing – they are also subjected to enormous pressure to say the ‘right’ thing. You must repeat the mantra ‘Trans women are women’. You must say ‘gender assigned at birth’ rather than ‘sex’. You must say ‘gender-affirming surgery’. This linguistic authoritarianism has nothing to do with politeness. Rather, it is a form of ideological inculcation. It pressures people to accept the idea that lies behind the words – namely, that sex can be changed.

So the term ‘gender-affirming’ implies acceptance of the idea that radical surgery is positive rather than delusional and dangerous. The term ‘assigned gender’ shatters the entirety of biology and replaces it with the notion that a person’s sex / gender cannot really be known at birth, despite what arrogant doctors might say. And the moratorium on any utterance of the word ‘mutilation’ crushes discussion of why, in the 21st century, lots of young women are binding or removing their breasts and are being celebrated for doing so. It is striking that both the old religions and the new religions, both rural Islam in parts of the Third World and hyper-woke transgender thinking in the West, lead inexorably to the mutilation of women’s bodies. The former severely modifies a young woman’s body out of shame over her emergent sexuality, while the latter radically alters a young woman’s body out of shame over her sex – over the fact that breasts are growing, puberty is happening, femaleness is expressing itself. In what moral universe could it be considered positive that perfectly healthy young women are horrified by their periods, are having mastectomies, are taking pills to suppress the onset of womanhood? In one, I would argue, which is as regressive and misogynistic as the one in which young women are forced to undergo genital mutilation lest they ever experience the sin of sexual pleasure.

It’s time for honesty. The sight of young women being celebrated on social media for having their breasts removed is not ‘affirming’ – it is horrifying. The treatment of young lesbians with medication that will ‘correct’ them and turn them into the men they really are is not positive – it is homophobic. And the provision of radically altering surgery that removes healthy body parts and induces infertility is not ‘healthcare’ – it is mutilation. As Deves said, that is an ugly and confronting word. But maybe it’s the word we need right now.

CLARIFICATION: An earlier version of this article stated that Katherine Deves compared trans surgery to the Holocaust. In fact, she compared her activism against gender ideology to people who stood up to the Nazis. We are happy to make this clarification.