How the British state failed Afghans

The botched withdrawal from Afghanistan shames Westminster and Whitehall. 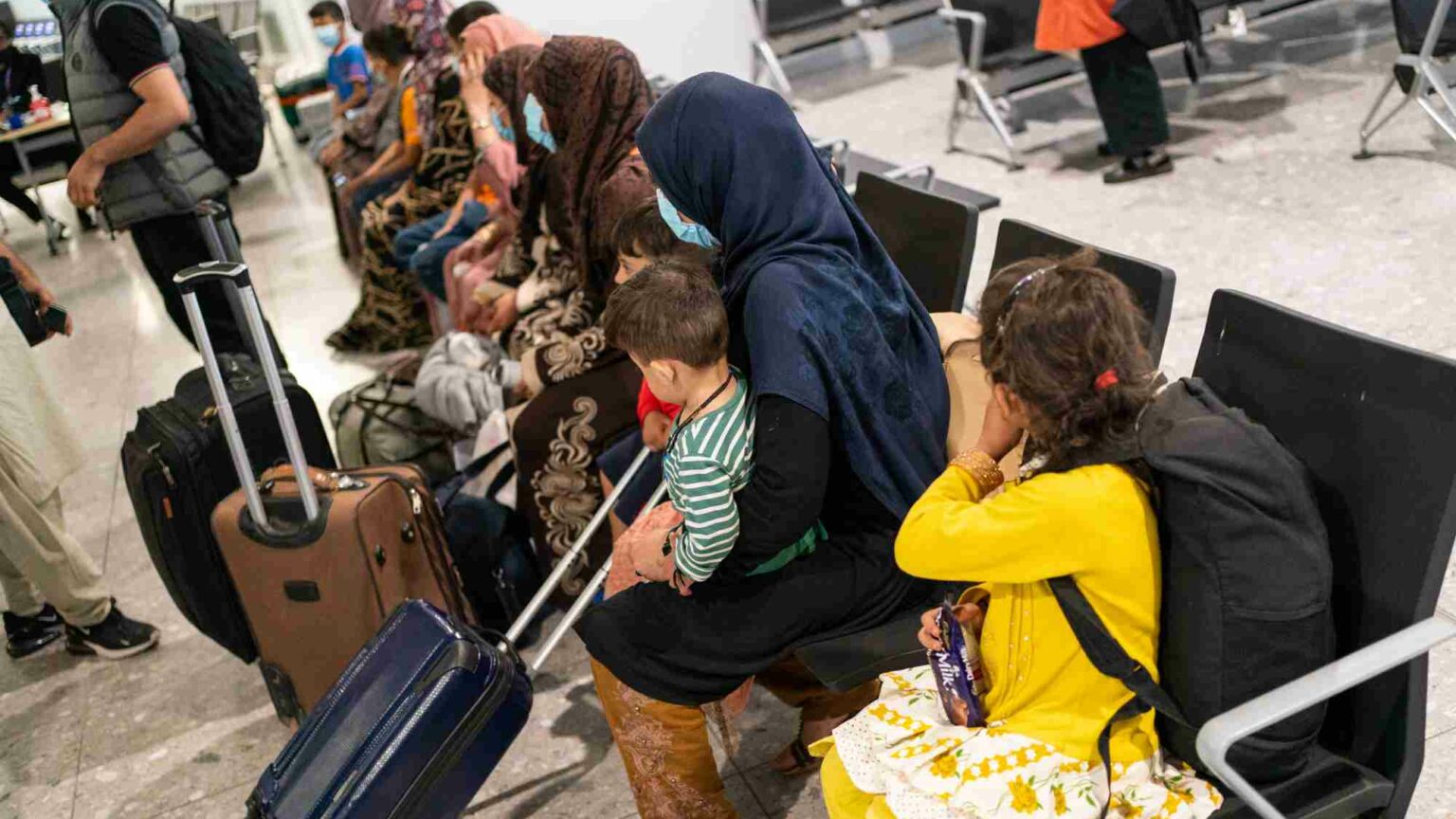 Two reports, shedding very different lights on the British state, were published last week. One was the Foreign Affairs Committee’s review of the UK government’s handling of the calamitous withdrawal from Afghanistan last summer. The other was the Sue Gray report into ‘parties’ held at Downing Street during Covid restrictions.

Sue Gray’s report was hyped up for months before its arrival and has received wall-to-wall media coverage since its publication. But the Foreign Affairs Committee’s Missing in Action: UK Leadership and the Withdrawal from Afghanistan has been virtually ignored.

It shouldn’t be. Because while Gray’s report revealed a lot about the drinks and nibbles at No10 leaving dos, Missing in Action provides an excoriating insight into the condition of the British state, outlining the frailties, incompetence and disordered decision-making of major parts of it, especially the Foreign, Commonwealth and Development Office (FCDO).

The report’s 58 pages paint a damning picture of the FCDO’s handling of British forces’ withdrawal from Afghanistan last August. Proper evacuation plans for Afghans at risk of Taliban retribution could have been drawn up in advance, but weren’t. Resources could have been allocated for the worst-case scenario of a rapid Taliban victory, but nothing was done. Leaders in Whitehall and Westminster went missing when it mattered most. Months of precious time were squandered and desperate Afghan lives were lost as a consequence.

The report lambasts ‘systemic failures of intelligence, diplomacy, planning and preparation’, laying the blame squarely at the feet of the FCDO, other Whitehall departments and the National Security Council. The report’s summary, penned by Tory MP Tom Tugendhat, says government ministers displayed a ‘fundamental lack of seriousness, grip or leadership at a time of national emergency’.

But it is the FCDO’s failure to prepare for the potential retaking of Afghanistan by the Taliban that is most striking. In particular, the report notes the ‘total absence of a plan for evacuating Afghans who supported the UK mission… despite knowing 18 months before the collapse of Afghanistan that an evacuation might be necessary’. Put simply, the Foreign Office didn’t seem to know who to evacuate. The report states that, ‘in place of a fair and robust prioritisation system’, the process of selecting who to evacuate was left ‘open to arbitrary political interventions’.

The clearest example of this was the prioritisation of Pen Farthing’s animal charity, Nowzad, and the cats and dogs it looked after. It meant that the lives of some 150 animals were prioritised over the lives of desperate Afghans. The report notes that Nowzad was ‘called for evacuation at the last minute, despite not meeting the FCDO’s prioritisation criteria, after a mysterious intervention from elsewhere in government’. It adds that ‘multiple senior officials believed that the prime minister played a role in this decision’, and the committee has ‘yet to be offered a plausible alternative explanation for how it came about’.

Plenty of journalistic scorn has been heaped on Boris and Carrie Johnson over their evasive responses to questions about the Nowzad evacuation. But, as the report indicates, the FCDO as a whole has been ‘intentionally evasive’ and ‘often deliberately misleading’ over how it organised the withdrawal from Afghanistan. Officials and ministers are accused of avoiding questions on many points, such as the exact duration of FCDO chief Sir Philip Barton’s holiday during the height of the crisis. ‘The department’s leadership’, the report says, ‘appeared to be more focused on defending themselves from criticism than on identifying and resolving issues’.

All of this points to a culture of chronic back-covering in Whitehall. It is as if senior FCDO officials believe they ought to be unsackable. Barton certainly screwed up. He has been the permanent under-secretary at the FCDO since September 2020, and was responsible for overseeing much of the planning phase of the withdrawal. The report urges Barton to consider his position.

And so he should. Barton, like former foreign secretary Dominic Raab, continued his holiday as Kabul fell. He did not return until the civilian evacuation was over, 11 days after the Taliban entered the Afghan capital. The committee says this was ‘difficult to understand and impossible to excuse’.

The report also draws attention to the FCDO’s unjustified belief that the Americans would change their minds about the withdrawal, which was first announced by former president Donald Trump in February 2020. Raab blamed this belief on an ‘optimism bias’ that had infiltrated the FCDO. They must have been appalled when the supposedly sensible Joe Biden entered the White House and committed to a slightly adjusted withdrawal plan in April 2021.

Not that Biden’s decision prompted any action on the part of the FCDO or other parts of the British state. Noting a ‘worrying lack of British influence in Washington’, the report says that the FCDO spent much of 2021 trying and failing to get the US to partially row back on the withdrawal and retain staff in Kabul.

Even after it failed to convince the US to change its plans, the FCDO still hoped that the withdrawal would be trouble-free – thanks to the supposed resilience and robustness of the Afghan state, and its army in particular. The government’s wilfully optimistic intelligence assessments, supported by the FCDO, led the prime minister to tell parliament in July 2021 that the Taliban had ‘no military path to victory’. A month later, the Taliban swept Afghanistan’s paper army aside. Raab blamed military intelligence, but, as former Tory MP Rory Stewart told the committee, the lack of knowledge about the weakness of the Afghan state was a product of the ‘rottenness at the heart of the British Foreign Office’:

‘The Treasury has cut [FCDO] staff again and again… we have fewer and fewer people who speak languages very well. There is less and less incentive to spend a long time in a field. The appetite in Whitehall for detailed political reporting diminishes all the time.’

This touches on something important. The FCDO may be able to count the weapons possessed by the Afghan army and how much cash was invested in Afghanistan. But it was apparently incapable of assessing the strength and authority of Afghan institutions, as well as the army’s morale and willingness to defend those institutions. There was simply no real insight into the nature of the state the West had tried to build in Afghanistan over the past two decades.

While the failures in Afghanistan have bruised Britain’s international reputation, they have directly harmed those Afghans who supported the UK during the 20-year-long occupation. When push came to shove, the UK effectively abandoned them. The report notes that while the FCDO launched the broader Afghan Relocations and Assistance Policy (ARAP) in late 2020, it did nothing for those Afghans who helped the UK but were not directly employed by the British state. Those affected – judges, activists, translators, journalists, etc – were simply cast to the wind. The report states that the FCDO and the Home Office failed ‘to deliver the bare minimum that we owed them’.

Thanks to Operation Pitting, the main evacuation effort carried out by the British armed forces, some 15,000 people were recovered from Afghanistan. But this was achieved in spite of the FCDO.

Two whistleblowers have risked their careers to reveal the truth about the FCDO’s failures. Former civil servant Raphael Marshall, who came forward in December, outlined the madness of fellow FCDO staff members continuing to ‘work from home’ as Afghanistan descended into chaos. Calls from desperate Afghans were ignored, communication with the Ministry of Defence was dreadful, and vital emails were ignored or unread. By close of play on 26 August 2021, just five days after the fall of Kabul, there were 4,914 unread emails in one Afghan Relocations and Assistance Policy inbox. Josie Stewart, the other whistleblower, said she had ‘never in my career seen anything within the civil service so badly managed’.

Leadership was notable by its absence. Raab and Barton were both on holiday and ‘decision-making was so unclear that even senior officials, such as the national security adviser, could not be certain how key decisions were authorised’.

Given this litany of failures, the FCDO should be subjected to far more media scrutiny and criticism than it has been. Sadly, the British commentariat is far more exercised by illicit sandwiches and tinned beer in Downing Street than it is a catastrophic foreign-policy failure that has imperilled the lives of thousands.

Raab has since moved on, taking charge of our crumbling justice system. And Barton remains in post. The only people who have so far paid the price for the British state’s failings are the Afghan people themselves.