Old lefties need to grow up

Ageing activists who identify as young are the bane of modern politics. 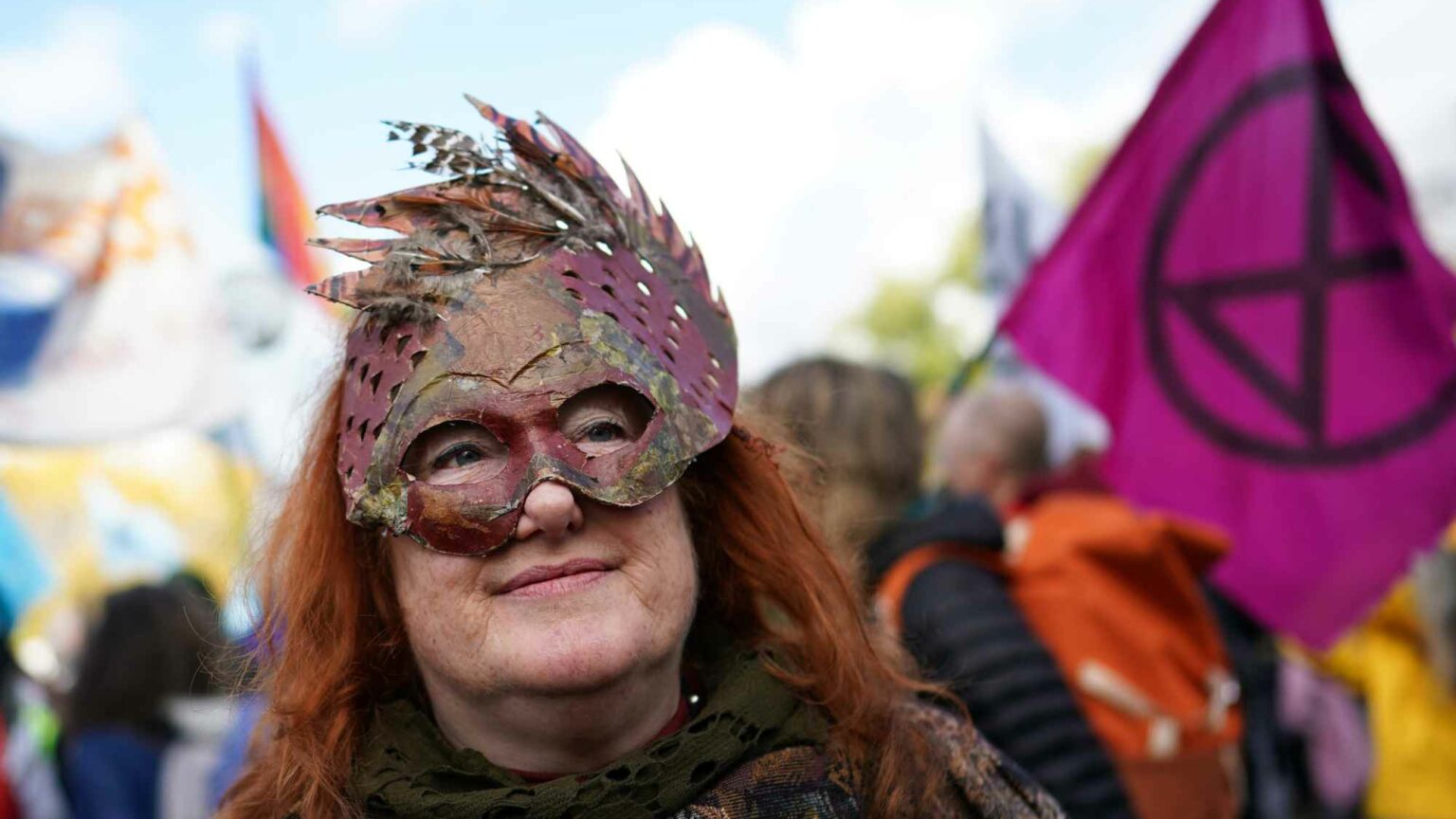 On hearing this week that a purple-haired Extinction Rebellion activist (keen on vintage clothes and ‘fantastic sex’) had suggested that Baby Boomers should be ‘euthanised’ as revenge for their contributions to climate change, I expected the culprit to be the usual fresh-faced millennial who we’ve all become bored of being scolded by. But on seeing photographs of 59-year-old (only three years younger than me) Jessica Townsend, it all made even more recognisably ludicrous sense, despite her comment supposedly being a joke. (Would she have made it about any other group? No. Therefore it wasn’t a joke.) For she is one of the growing tribe of left-wing old people who identify as Forever Young.

It’s an easy mistake to make. It was always going to be hard for anyone who grew up in the Sixties or later to age gracefully; I was born in 1959 and I don’t think I’ll ever get around to it. But then, I don’t joke about exterminating people according to how old they are.

Before the Sixties, youth was something people wanted to get over as soon as possible so they could join the adult world with all its arcane pleasures. But the moment the pill led sex before marriage to become normalised, adulthood lost a great deal of its appeal. Philip Larkin wrote ‘Annus Mirabilis’ about this development (‘Sexual intercourse began / In nineteen sixty-three / Between the end of the “Chatterley” ban / And the Beatles’ first LP / Up to then there’d only been / A sort of bargaining / A wrangle for the ring / A shame that started at sixteen / And spread to everything’) and returned to it in ‘High Windows’ (‘When I see a couple of kids / And guess he’s fucking her and she’s / Taking pills or wearing a diaphragm / I know this is paradise / Everyone old has dreamed of all their lives’). The young seemed to be having the best sex – so of course adults wanted to dress like them and eventually act like them, too.

Then the Boomers didn’t do the decent thing and die, due to the wonder of modern medicine; instead, they’re reporting at A&E with unparalleled recreational drug use and at sexual-health clinics with a little something they picked up on their last 58-70 holiday. Stairlift to heaven indeed! These are the SKIs (Spending Kids’ Inheritance), or what I call the YOLOAPs. ‘Wrap up warm and I’ll meet you at the cyber café!’, I heard a lovely lady in her seventies shouting gleefully into her iPhone on the bus.

On paper, Townsend should be one of these happy old dears getting high on the modern world; she enjoys ‘lemon drizzle cake, hot buttered toast, mushroom risotto and burgundy wine’. It’s a lovely life being a writer, and she has apparently had a career as a playwright and screenwriter, though disillusion with her craft appears to have been fermenting all the while: ‘When I was first a writer in my twenties there seemed at that time to be no big subjects to write about, and I felt slightly badly placed to be born into cosy times… most of the plays, films and novels I read were about white, middle-class, heterosexual couples betraying each other.’ It was while researching a novel set in 2030 that she became interested in climate change before becoming an Extinction Rebellion activist, co-founding the XR podcast and the Writers Rebel group.

Her words speak volumes – even if her volumes don’t. Those who latch on to the climate-change panic are, in my experience, not terribly gifted people who nevertheless crave the spotlight; hence the spectacular but silly protest events of XR, which are high on media opportunities but low on persuading the public. Meanwhile, those who have been successful in their chosen careers often feel a bit establishment, and see cosying up to climate crusaders as a way to give them back a bit of their edge – see Emma Thompson taking a flight of over 5,400 miles between Los Angeles and London, thus stomping out a one-and-a-half-tonne carbon footprint, in order to show solidarity with Extinction Rebellion. XR activists, though they demand that flights be used only in emergencies, then simpered that Dame Emma’s jaunt was ‘an unfortunate cost in our bigger battle to save the planet’.

Faced with an uninspiring writing career, as Ms Townsend appears to have been, what could be more of a kickstart to the electric scooter of creativity than a leading role in the latest struggle between good and evil? She claims that those who oppose her chosen tribe will go down in history ‘in the same way as those who opposed the abolition of slavery, the enfranchisement of the working classes, the Suffragettes’. In short, she is one of the Righteous Old, not to be confused with those bumptious Boomers living it up at their local cyber café.

Members of the climate-change crew have ‘previous’ in identifying as things they’re not, it must be said. Though their meetings make your average UKIP rally look like Reggae Sunsplash, they identify as diverse and inclusive, so that’s okay. They identify as non-polluters – though some of their leading lights appear to have clocked up the frequent-flyer points faster than anyone since pre-shamed Prince Andrew, hopping on planes quicker than you can say ‘Instagram’. One of them was shown on social media enjoying safari holidays in Uganda, boozing on the beach in New Zealand and bungee jumping over the Nile. That’s not a simple carbon footprint – that’s a carbon clown-shoe footprint.

Of course it’s not just climate change that attracts the Peter Pan Tendency to politics; I’ve written here before about the Grumpy Old Woke Bros who have taken it upon themselves to instruct uppity women and members of the working class on how to behave. Way back at an anti-Brexit rally in 2017, the then 68-years-young Ian McEwan spluttered: ‘A gang of angry old men are shaping the future of the country against the inclinations of its youth. By 2019, the country could be in a receptive mood: 2.5million over-18-year-olds, freshly franchised and mostly Remainers; 1.5million oldsters, mostly Brexiters, freshly in their graves.’

Kate Bush has written some lovely songs, but I really believe that ‘The Man With the Child in His Eyes’ gave a bunch of foolish males the stupid idea that if they never grew up, it would be really attractive. Newsflash: it’s not. When men used to be accused of having the male menopause, we mocked them as sad old salary men, keen to get hold of the fast car and the foxy girlfriend after a lifetime of wage slavery – but lefties, bohos and artists are just as bad.

Both Johnny Depp and Amber Heard strike me as appalling people, but I did feel sorry for her when a witness claimed ‘she told me she didn’t like hanging around at his house with his friends because it was boring and it was all old men playing guitars and it wasn’t interesting her’. A young friend of mine was taken with a famous writer twice her age some years back – until it transpired that his idea of fun was hanging out with other middle-aged famous writers swapping the most obscure Bob Dylan lyrics back and forth.

In unattractive roués from Hefner to Westwood, there is the conviction that attractive young women are genuinely keen on having sex with them; they obviously possess magic mirrors. Yes, the occasional woman suffers from this delusion too – see Madonna wiggling away on TikTok in a thong – but men are far more prone to this most debilitating of diseases. And I can see why they’re confused. If you can get applause for identifying as the opposite sex, when every cell in your body says otherwise, why on Earth shouldn’t you be considered stunning and brave for identifying as Forever Young?