Bumbling Joe Biden is a threat to world peace

Referring to the war in Ukraine as a ‘genocide’ is wrong and dangerous. 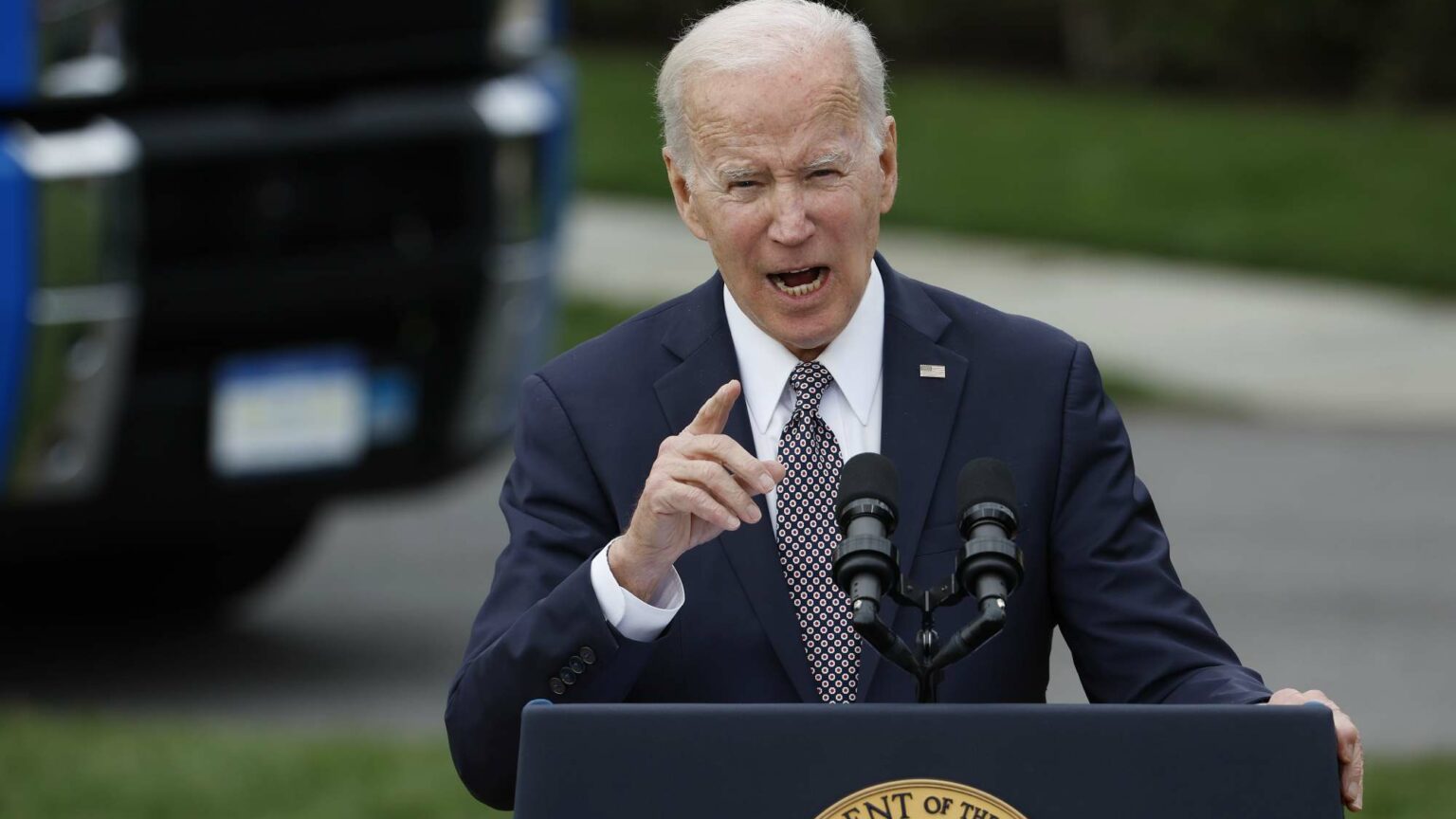 Bumbling Joe Biden isn’t funny anymore. It might be amusing when your crazy uncle blurts out something unexpected at a family dinner. But when the most powerful man on Earth does it? Not so much. Yesterday, ‘in passing’, as the Guardian put it, President Biden referred to Russia’s war in Ukraine as a ‘genocide’. This might just be the dumbest, most ill-advised and lethally consequential thing Biden has said since taking office.

The circumstances in which he uttered the g-word, in which he made the most serious accusation you can make against a nation state, were bizarre. He was in Iowa, at a public discussion on the use of ethanol in petrol, of all things. Then – ‘in passing’ – he said: ‘Your family budget, your ability to fill up your tank, none of it should hinge on whether a dictator declares war and commits genocide half a world away.’ And so did an announcement about the lifting of restrictions on ethanol use in order to reduce the price of fuel turn – ‘in passing’ – into the United States of America accusing the Russian Federation of committing the most heinous crime known to man.

It is unclear whether accusing Putin of genocide is White House policy now, or if Biden was just running his mumbling mouth, as is his wont. Pressed by reporters as to whether he really meant to say ‘genocide’, Biden said: ‘Yes, I called it genocide because it’s become clearer and clearer that Putin is just trying to wipe out the idea of even being Ukrainian.’ Not surprisingly, other world leaders were a tad alarmed. French president Emmanuel Macron rebuked Biden for his ‘verbal escalations’. We need to be ‘careful’ with our terminology, he said, rightly.

It remains to be seen whether this is the White House consciously upping the ante or just Biden having another senior moment. He has form, after all. At the end of March – again in passing – he called for regime change in Russia. ‘This man cannot remain in power’, he said about Putin in an ‘off the cuff’ remark at the end of March. Most of us make jokes off the cuff or express exasperation off the cuff – Biden expands America’s war aims off the cuff. The White House swiftly walked back this unscripted declaration of regime-change hostilities. Before that, Biden made a blunder that suggested US troops had been deployed to Ukraine. The White House walked that back, too. ‘[We] are not sending US troops to Ukraine’, a spokesman clarified.

Maybe the White House will walk back the ‘genocide’ thing as well. Though it might be too late. The word’s out there now. And not just from the mouths of those irritating liberal commentators and laptop bombardiers who think every war is a genocide (except the ones they support, of course, like Iraq, Afghanistan, Libya), but from the mouth of the American president himself. Make no mistake – this is incredibly dangerous war talk. It transforms Ukraine from an undoubtedly bloody conflict that has global implications into a possible site of further external intervention and fighting. Indeed, the United Nations’ policy on ‘The Responsibility to Protect’ expressly obliges the Security Council to take action – ideally diplomatic action, but if that fails, then military action – in order to ‘protect populations from genocide’. If Russia is committing genocide, then the US and its allies have a responsibility to stop it somehow. This is the dire, destabilising situation Biden has either blunderingly or consciously pushed the world towards.

It is wrong and dangerous to fling the word ‘genocide’ around. Russia is unquestionably committing atrocities in Ukraine. In spiked’s view, its unprovoked war of aggression against the sovereign Ukrainian people is itself an atrocity, an abomination, that must come to an end immediately. But genocide? That is a very specific term. It doesn’t just mean ‘bloody war in which many people are dying’. If it does, then the Western invasion of Iraq was a genocide. So was NATO’s bombing of Libya. So is Saudi Arabia’s grotesque crusade against Yemen. Biden and his political acolytes back or backed all those wars. It would make as much sense for Putin to call Biden a genocidaire as it does for Biden to say that of Putin.

No, a genocide is the conscious mass murder of a significant number of people from an ethnic or national group with the broader aim of destroying that ethnic or national group. There’s no evidence Russia is doing that in Ukraine. Making baseless accusations of genocide is a very serious thing. First, as already outlined, because it intensifies conflict. It transforms what are usually horrible civil wars or, as in this case, wars of aggression by one nation against another into existential battles; into epoch-shaking showdowns between Good and Evil in which ‘we’ – the heavily armed outsiders – have a responsibility to intervene. The truth and the realpolitik of the war at hand – and, by extension, the possibility of resolving it through talks or deals or terms of surrender – get buried under all the hysterical talk of modern-day Holocausts. Pontificating about ‘genocide’ might make Biden and other Western liberals feel puffed-up and self-important, but it frequently has escalating and disastrous consequences for the people caught up in the war that these people are giddily exploiting for virtue and retweets.

Secondly, genocide talk can have an unwittingly weakening impact on the resistance movement in a war, on those who are standing up to their aggressors. The international community’s promise to step in when a genocide is supposedly being committed creates a warped dynamic that actively incites communities to present themselves as victims, to play up their existential frailty. Tragically, we can see this happening in Ukraine. President Zelensky has welcomed Biden’s genocide comments. Following the exposure of Russia’s vile attacks on citizens in Bucha, numerous Western commentators have said ‘This is genocide’. This subtly encourages Ukraine to play the victim card rather than the resistance card; to consider emphasising its smallness in the face of a genocidal aggressor rather than its strength as a resistor of Russian imperialism. The more that Western leaders and observers talk about genocide in relation to Ukraine, the more we are likely to see Ukraine advertise its vulnerability rather than its valiance, all in the name of securing further external assistance. This would be a disaster for a people who have proven themselves so courageous in the face of Putin’s reckless crusade.

And thirdly there’s the not insignificant matter of historical memory. Throwing the word ‘genocide’ around makes it seem as though such a horrendous crime is a common occurrence, when in truth it is mercifully rare. When we hear the word genocide we tend to think of the attempted destruction of the Armenian people in the Ottoman Empire, and, of course, the conscious, industrialised campaign by the Nazis to vaporise every Jew on Earth. To refer to relatively normal if horrific wars like the one in Ukraine as ‘genocides’ relativises true genocides. In flattening everything bad into a ‘genocide’, it demeans our ability to understand the enormity of the crimes of history and our ability to appreciate the political complexities of contemporary conflicts. It is self-aggrandising moralism that discourages critical and careful thinking in preference for scoring some moral brownie points from someone else’s suffering.

This is what Biden has done: escalated global tensions, encouraged a cult of victimhood among Ukrainians, and driven another nail into the coffin of historical truth. White House, walk this back, quickly and fully.