The BBC’s fake news about fracking

This promising energy source was strangled at birth by green misinformation. 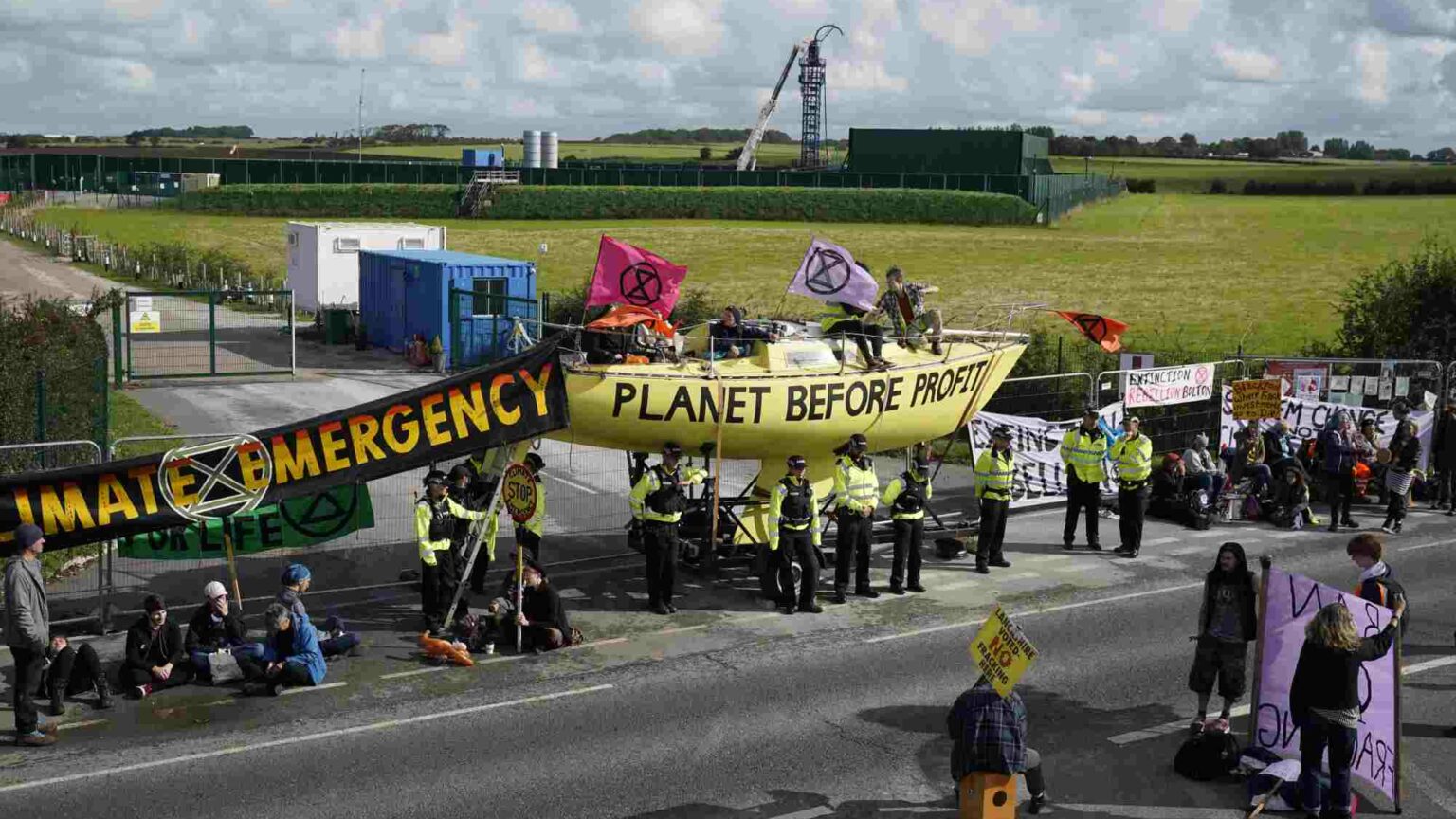 The seasons are changing, and for many of us that means it’s time for a spring clean. My back patio has been gathering months’ worth of soil and winter debris, so I now need to blow it up. I will use the same method to clean the grime off my car. After ensuring the area is clear, and any nearby houses or pedestrians are safe, I will subject the car to lots of explosions. In each case, I shall be using a power washer, of the kind that Halfords sells for around 50 quid.

At this point, I expect the pedants among you to start quibbling. The hydraulic pressure from my power washer is not an ‘explosion’, you might point out. Water pressure does not cause ‘a sudden and rapid expansion’, which is how many dictionaries define ‘explosion’. But according to the BBC’s most senior green journalist, environment editor Roger Harrabin, there is no difference between hydraulic pressure and explosions – and Roger’s word is good enough for me.

Harrabin began to deploy the word ‘explosions’ in his reports in 2011, when the UK’s coalition government and the public began to warm to a new and emerging energy resource: shale gas. This is gas trapped in rocks some 9,000 feet beneath our feet. It can be released using well-proven techniques, which have been continuously refined and improved over time. In the same way that the cost of space exploration has fallen, because of the rapidly declining cost of rocketry, drilling has been getting much cheaper too, because of advances in horizontal drilling. And it’s no surprise that soon after proving that rocketry could be done cheaply, SpaceX CEO Elon Musk turned his attention to boring holes in the ground, with ‘The Boring Company’.

Back in 2011, polling showed that the promise of shale gas was proving popular with the British public. In the United States, decades of decline in impoverished rural areas had been reversed by the new gas boom. In the UK, we were all set to benefit from this new cheap and reliable domestic energy supply – for decades to come. And geopolitically, Western Europe had the chance to reverse its dependence on Putin’s Russia – only 13 per cent of Europe’s gas would derive from Russia by 2040, if Europe had got cracking with fracking in 2011, the Baker Institute estimated.

A couple of years later, the UK government started allowing local councils to keep 100 per cent of the business rates generated from any shale projects in their region. So it is no surprise that impoverished communities in sparsely populated areas welcomed these fracking projects.

But the BBC saw things differently. Extracting gas from shale required ‘small controlled explosions’, Roger Harrabin reported on 1 April 2011. This linguistic curiosity was not a one off. Nor was it an accident, as you would expect from a graduate of English at St Catherine’s College, Cambridge. He repeated it weeks later, on 24 May 2011. Shale gas was controversial, Harrabin insisted, because it had to be released by ‘tiny explosions’.

The proposition that ‘fracking requires explosions’ leads to another – that ‘explosions cause earthquakes’. But both are false. Neither owes anything to science. They are crude propaganda.

Of all the environmental issues posed by hydraulic fracking, seismic dangers caused by ‘explosions’ are not one of them. Most environmentalists in 2011 were more concerned with the risk of water depletion, or contamination from the chemicals used early in the process. When anti-fracking activist Josh Fox made his Oscar-nominated Gasland documentary in 2010, nearly a quarter of US gas production was coming from shale gas – enough evidence, you might think, to see whether fracking caused earthquakes. But Fox didn’t mention quakes once. His film focuses instead on water pollution (Gaslands is the film notorious for attributing naturally occurring surface-level methane – which had been observed for decades – to fracking).

Whitehall was emphatic that Harrabin’s ‘explosions’ metaphor was false and misleading. ‘There are no explosives used in fracking operations… In a shale-gas well, it is the water pressure applied in the subsequent fracking operation which causes the rock to fracture’, the Department for Energy and Climate Change made clear in a research note in 2013. ‘Having reviewed the risks, the Royal Society and Royal Academy of Engineering concluded that the health, safety and environmental risks [of fracking] can be managed effectively in the UK, by implementing and enforcing best operational practice’, a research briefing in the House of Commons Library confirmed in 2014.

But these corrections came too late. Thanks to the BBC’s environment editor, the notion that fracking means explosions was now at large. And Harrabin’s ubiquity across radio, TV and digital media ensured it.

So when, in November 2011, instruments detected two tremors on Cuadrilla’s fracking test site in Lancashire, this seemed to confirm the worst. The tremors registered 2.3 and 1.5 on the seismic scale. But these weren’t earthquakes, let alone ‘explosions’, and they were below the 3.5 threshold at which any tremor is felt by a human. The seismic scale is logarithmic, so each whole number represents a tenfold increase. The British Geological Survey doesn’t record earthquakes below 2.0. According to academic scientists, a magnitude of 2.3 would be smaller than ‘a small pumpkin dropping to the floor’ (which is 2.61, if you’re curious).

Nevertheless, from then on, fear of ‘earthquakes’ became the dominant reason given by those protesting against new fracking sites. Often this view was advanced by bussed-in activists, not locals themselves (‘We took a coach of campaigners to stand in solidarity with others at Barton Moss Community Protection Camp in Greater Manchester’, boasted Frack Free Somerset in 2014).

Cuadrilla’s reward for its conscientious environmental monitoring also earned it the attention of civil servants. Incredibly, a seismic threshold was then set by the UK government at 0.5, which was greeted with widespread astonishment by the industry. As one industry expert recently pointed out: ‘The threshold set is 12 times lower than a quarry-blasting limit and 30 times less than for some construction activities. Sir Ed Davey, the leader of the Liberal Democrats, boasted about his part in setting these ridiculously low limits.’

Fracking was formally suspended, indefinitely, weeks before the last General Election in 2019. That year, YouGov reported shale gas was now less popular than coal or oil. Perhaps not surprisingly, as energy costs didn’t even feature in voters’ list of pressing issues back then. They certainly do today, with the average energy bill for a household doubling to £2,000 per annum, and £3,000 annual bills are likely to follow in the autumn.

Even after the 2019 moratorium, Harrabin was still deploying his rhetorical ‘explosions’ with the gleeful enthusiasm of a child who has discovered a pocketful of bangers. ‘The industry will have to improve’, he opined, ‘especially on earthquakes caused by the small explosions set off underground to release trapped gas’ (my emphasis).

Today the BBC now devotes considerable resources to counter ‘misinformation’ and ‘fake news’, yet one of the most damaging falsehoods ever believed began at the BBC. UK government ministers know that ‘earthquakes caused by explosions’ is a lie, I am told privately. But the government lacks the moral courage to debunk the lie, and to make the case for safe, regulated gas extraction. And as a result, the public will pay a high price in excess winter deaths and poverty.