How wokeness is torpedoing the solidarity with Ukraine

Identity politics is the implacable enemy of human solidarity. 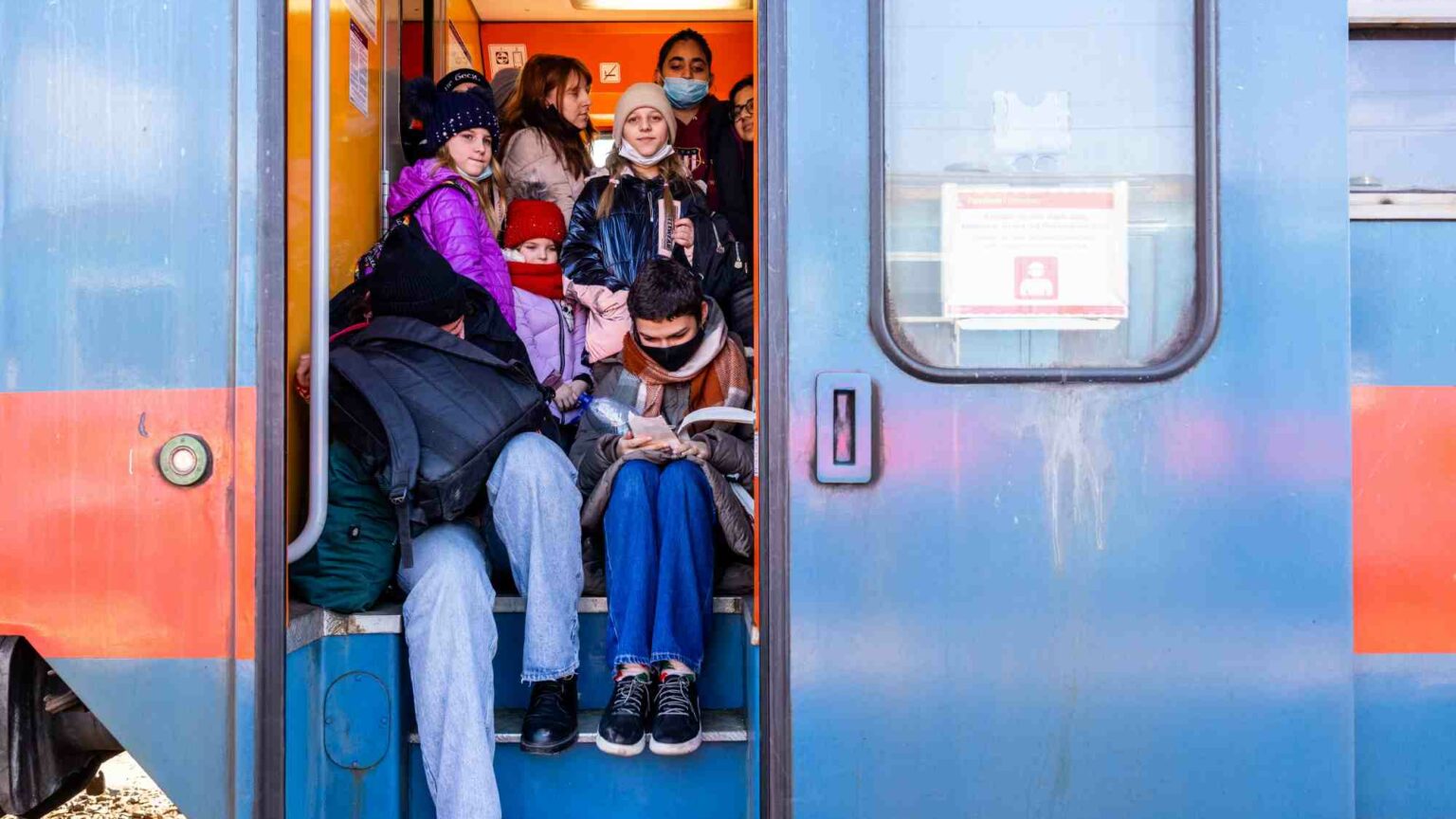 As Russian forces continue their violent march into a largely white nation, into a Slavic country in the east of Europe, what is the woke set saying? ‘Black Lives Matter.’ Seriously. The modish identitarians who make up what passes for ‘the left’ these days have finally found something in the Ukraine calamity that they can get truly, noisily agitated about. No, not the fact that a nation’s sovereignty is being pummelled by an unforgiving external power. Not even the fact that many Ukrainians have already lost their lives in this terrible invasion. No, it is reports about Africans in Ukraine being mistreated during the vast exodus of Ukrainians to Poland that has animated these race-obsessed activists and finally got them tweeting and crying with passion.

Sure, the woke may have made perfunctory comments about standing with Ukraine. They probably even put a Ukrainian flag in their social-media bios. But it is the alleged predicament of #AfricansinUkraine that has properly pumped them up. ‘Concerns mount as black people report racism while fleeing war zone’, says one headline. Apparently there is ‘bloodshot racism’ in the eyes of the Ukrainians who are refusing to help African-heritage people. Video footage seeming to show white Ukrainians being prioritised over African-heritage people on the trains leaving for Poland has gone viral, with the inevitable #BlackLivesMatter hashtag. One of the British-based activists who set up an online fundraiser to assist Africans in Ukraine is in no doubt as to what is happening over there. It is ‘anti-blackness’, she says. Of course it is. Everything is anti-blackness these days. ‘[Even] within a war… we still have racism’, she says. ‘White Ukrainians’ are being allowed to flee and are being welcomed into Poland with ‘open arms’, she continues, but not people of African descent.

Those privileged white Ukrainians! Waltzing out of their bombed and wartorn country with ease! Leaving their families and their shattered homes without encountering so much as a smidgen of structural oppression! That is essentially what is being argued here. That even in a war zone, whites enjoy privilege. That even the Ukrainian victims of Russian aggression are having it easy in comparison with us, the truly downtrodden, the real victims, the perma-oppressed. Nadine White, the race correspondent for the Independent (race correspondent!), is reporting on the ‘racial discrimination’ at the Ukrainian-Polish border. She cites one African in Ukraine as saying that black people are clearly viewed by some Poles and Ukrainians as ‘lower beings’.

Is anyone else feeling just a little repulsed by this, by these insinuations of racism being made against Ukrainians and Poles as they try their damndest to deal with one of the worst crises of recent times? It goes without saying that everyone who wants to flee Ukraine for the safety of a neighbouring nation should have the right to do so, regardless of their national origin or their skin colour. But we need to maintain some scepticism about the idea that it is flat-out racism that has allegedly made the experience of exodus harder for African-heritage people. In the fog of war, it is always difficult to know what is going on. Jumping to the conclusion that Ukrainians are behaving with ‘bloodshot racism’ strikes me as far too kneejerk and definitive, not to mention being potentially, and ironically, an expression of its own form of prejudice. After all, among the Western European chattering classes there has long been a chauvinistic view of Slavic people as racist and regressive, as insufficiently woke, as not quite as au fait as us with the correct lingo and attitudes. Is that what’s happening here?

What’s more, Poland has denied that it is exercising any kind of racial test at the border. A spokesman for the Polish PM said the Western European media are ‘spreading misinformation’: ‘Refugees fleeing war-stricken Ukraine are entering Poland regardless of their nationality.’ In Ukraine itself, it seems possible that Ukrainian citizens have been prioritised in certain circumstances, but is that racism or simply the Ukrainian state doing what many other states do when okaying people for urgent assistance? The Independent reports that one Nigerian-heritage person in Ukraine was told by Ukrainian military personnel that ‘No English, no Polish, no blacks’ would be offered help to leave. Not only does this seem like a neatly unlikely thing for an official to have said – it also suggests, if true, that citizenship rather than race has been the main potential factor in the Ukrainian authorities’ difficult, hectic decision-making about who gets a seat on the first trains out of the country. After all, English people and Poles are white. How about a #PolishLivesMatter hashtag? How about a defence of the ‘oppressed’ English?

What is happening here is that some Western journalists and activists – what’s the difference these days? – are projecting their Western-centric, navel-gazing and woke politics of race on to a situation that is far more complicated than that. How can they live with themselves, is what I want to know. ‘What did you do during the great Russo-Ukrainian War, mummy?’ ‘I implied that Ukrainians are racist shits, sweetheart.’ Well done. The woke Westerners who seem to imply that Ukrainian officials are anti-black and anti-African are unwittingly playing into Putin’s hands. They are potentially contributing to his claim that Ukraine is a hotbed of regression and ‘fascism’.

More importantly, this growing focus on Ukrainian and Polish ‘racism’, on the privilege allegedly enjoyed by white Ukrainians, confirms that wokeness is the implacable foe of solidarity. We are just four days into this horror and already the identitarian set in the West is projecting its eccentric, self-obsessed narrative on to a bloody and confusing warzone. The Ukraine crisis just doesn’t compute in the racial hierarchy constructed by the woke West, in which black people are always victims and white people are always privileged. And so these people have actively sought out alleged instances of anti-blackness in order that they might more readily relate to this crisis. In the process, they have likely exaggerated the problem of anti-African prejudice in the exodus, demonised white Ukrainians as prejudiced, and torpedoed Western solidarity with Ukraine by raising the possibility that this is a nation of white privilege and fascistic sensibilities. Putin, I bet, is chuckling.

To be clear, there is identity politics on the right, too, in relation to Ukraine. Some voices are arguing that this invasion resonates more than other recent invasions because the victims are so much like us: that is, white, Christian, European. ‘They seem so like us. That is what makes it so shocking’, says Daniel Hannan in the Telegraph. ‘War is no longer something visited upon impoverished and remote nations’, he says. This, too, speaks to a narrow reading of the Ukraine crisis, and of war more broadly, through the identitarian obsessions of folk in the West. To those of us who were as horrified by invasions and bombings in Baghdad and Aleppo – two cities of extraordinary importance to human civilisation, as it happens – as we are by Russia’s current siege of Kyiv, this idea that people who are culturally similar to us are more likely to make us feel sympathetic is alien. A human being is a human being, regardless of his or her identity. Every human life has equal worth, whether it is being lived in gorgeous Kyiv or bullet-marked Mogadishu.

However, the woke leftists criticising Hannan don’t have a leg to stand on. They, too, have sought out the racially familiar in Ukraine, rather than simply offering solidarity to this violated nation. Only where some on the right look at Ukraine and see their own Europeanness reflected back at them, some on the woke left look at Ukraine and think to themselves: ‘There must be anti-blackness in this predominantly white nation.’ Identitarianism has corrupted the left. Worse, it has corroded humanism itself. Now is the time for fulsome support for the Ukrainian people and their hard-won right to self-determination, not nudges and winks and vile elitist hints that these people, as white as they are, must somehow be ‘problematic’.