The tyranny of high-status opinion

How the woke left wrote the script for the Canadian state’s tyrannical assault on the protesting truckers. 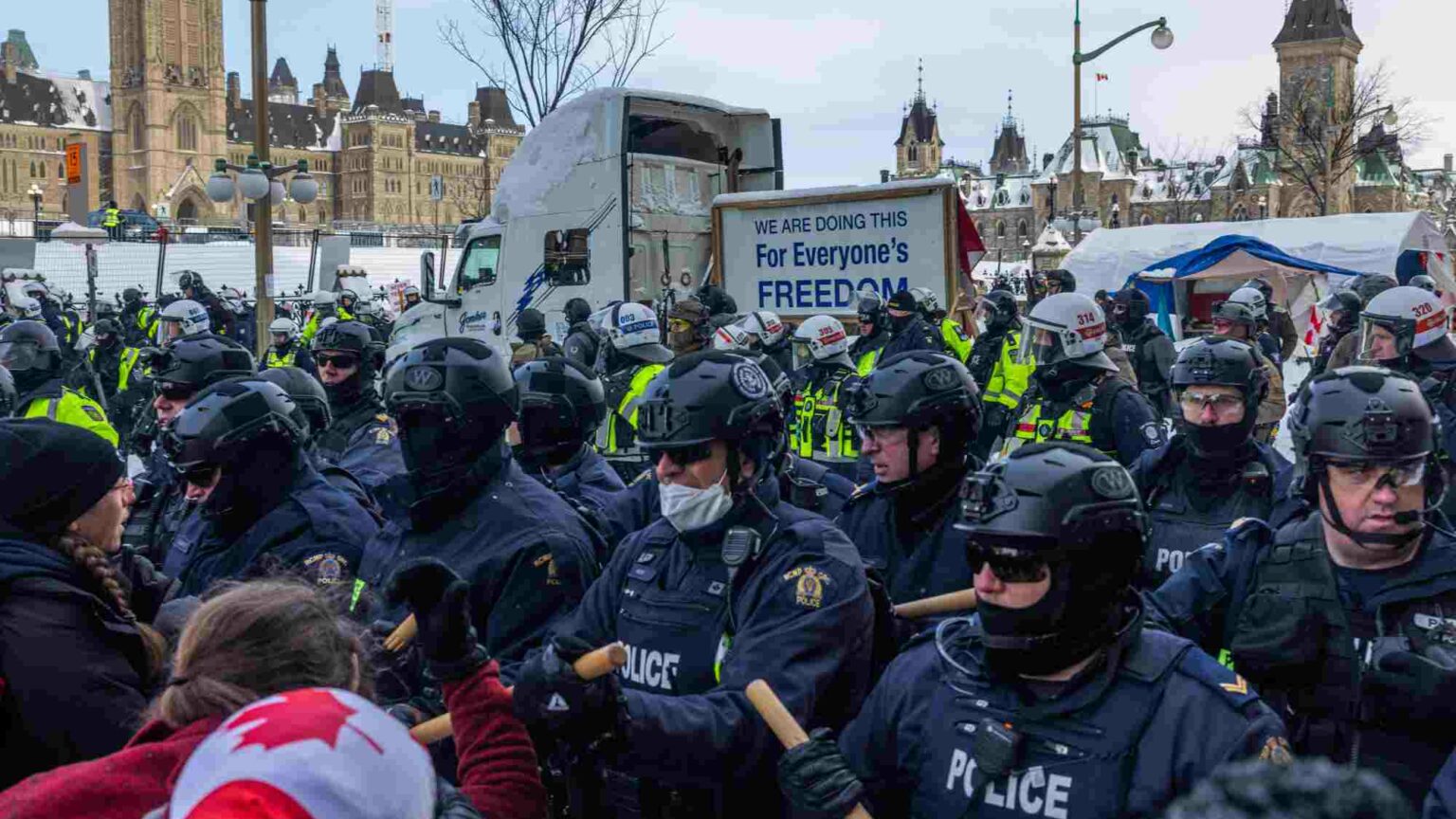 At first glance, it looked like one of the strangest, most incongruous moments of the great trucker uprising of 2022. There were the truckers and their working-class allies, in Ottawa, loudly agitating against Justin Trudeau’s vaccine mandates, when a bunch of hyper-woke, definitely not working-class counter-protesters rocked up to rail against this horn-honking throng. And what did they chant, these painfully PC counter-protesters? ‘Trans rights are human rights’, that’s what. As clear as anything, these supposed leftists, seemingly horrified by the sight of working-class men and women fighting for their rights, engaged in arguably the most striking non-sequitur of the 2020s so far – they brought transgenderism into an issue that has nothing whatsoever to do with transgenderism.

The truckers have said nothing about trans people. We have no idea what these pissed-off working-class drivers think about genderfluidity and all the rest. My hunch is that they think it’s nonsense. But we don’t know. This vast gathering of truckers and their supporters, which has so rattled the Trudeau administration and inspired copycat revolts around the world, is completely unrelated to sex changes and pronouns and the right of born men to beat women in sports and all the other things that fall under the banner of ‘trans rights’ these days. So, understandably, many people were perplexed by the counter-protesters’ chant. ‘I don’t think they are at the right protest’, said one observer. Memes emerged, saying: ‘Truckers: Freedom for all! Counter-protest: Trans rights are human rights. Truckers: What??’ What indeed.

And yet, at another level, at a deeper level, this weird, disjointed counter-revolt against the ‘revolting’ truckers actually makes sense. For what we had here was the shrill, noisy reassertion of high-status opinion against the supposedly low-status demands of the truckers for more freedom and better working conditions. This was the correct-thinking set staking its moral authority over the irritated truckers; the upper-middle-class guardians of approved ‘progressive’ thought pushing back against a pesky, old-fashioned, grassroots demand for liberty and respect. There was at least a semi-conscious element to this spectacular non-sequitur on the streets of Ottawa – the elite counter-revolters were essentially saying that identity is now more important than class, that issues like trans rights now thoroughly trump workers’ rights, and that being ‘left-wing’ no longer means supporting the masses against the state, but rather is about reprimanding the masses for their supposed wrongthink and siding with the state against the people.

In fact, it goes even further than this. These counter-protesters, whether wittingly or not, were marking out the truckers as ‘problematic’, as bigots, as real-life Emmanuel Goldsteins deserving of the most severe forms of condemnation and even punishment. They were putting a target sign on the heads of these unpersons, signalling that they are fair game for shame, censure and even police repression and assault. The counter-protesters, for all their self-indulgent fantasies of radicalism, were behaving as the running dogs of the Trudeau regime. Trudeau had already branded the truckers as ‘transphobic’ – and also Islamophobic, homophobic and anti-black – on the basis of no evidence whatsoever. And these ‘trans rights’ counter-protesters were essentially doing Trudeau’s bidding, obediently echoing the vile anti-working-class prejudices of the Canadian state, as they hollered at these working-class protesters: ‘Trans rights are human rights!’ They were publicly declaring that the truckers are thoughtcriminals, possessors of dangerous, bigoted thoughts, and thus they may be crushed. And lo, they were.

In other words, that strange ‘trans rights’ counter-protest captured a larger truth about the truckers’ uprising. Which is that wokeness has enabled the Canadian state’s exceptionally intolerant and violent assault on this working-class uprising. Many of us have marvelled at the allegedly radical left’s studious ignoring of the Canadian working-class revolt against the bourgeois state. But as more and more time passes, it has become clear that the left has not in fact ignored this globally important protest – rather, it has played a key role in legitimising state tyranny against the protesters, in providing the political justification for the Ottawa police’s violent wielding of truncheons and their crushing of working people. The woke are not mere bystanders, not mere wide-eyed shoulder-shruggers to this working-class uprising. On the contrary, they have been the moral facilitators of the state’s classist violence against the truckers and their allies.

The Canadian state’s crackdown on the truckers has been almost unbelievably severe. The state has used every weapon it has access to in order to silence and isolate working people who only want the right to earn a living without being pressured by the state to receive a particular form of medical treatment (Covid vaccination). The Ottawa police have deployed their horses to crush protesters and their allies, including at least one person who was in a mobility scooter. The state has frozen the bank accounts of the protest leaders. Big Tech – that is, capitalism – has hampered citizens’ ability to offer money to the truckers. The fourth estate, behaving more like lapdogs than journalists, has assisted the Canadian state’s authoritarianism – for example, by exposing the names of people who made small donations to the truckers’ convoy. One hack at the Salt Lake Tribune who has been emailing (harassing?) donors to the Freedom Convoy had previously been photographed wearing communist paraphernalia on social media. You couldn’t make it up: woke, self-styled ‘communists’ abetting the capitalist state’s suppression of a working-class revolt. And of course the Trudeau regime has invoked the Emergencies Act for the first time ever in order to empower the state to liquidate this pesky, problematic gathering in Ottawa.

The Canadian state has used violence, battery, horses, financial immiseration, threats and blackmail to punish and ultimately to end the truckers’ revolt. It has even threatened to remove the dissenters’ children. The Ottawa police tweeted that any trucker or truckers’ ally who brings a kid to a protest will be confronted and their ‘children will be brought to a place of safety’. This is a slippery, tyrannical threat of child-removal designed to dampen and ultimately silence a ‘problematic’ protest. It is surely one of the lowest tactics deployed by the state against its critics in modern times: carry on protesting and we will take your children from you.

But we must always ask ourselves the following question: who or what has provided the supposedly ‘moral’ justification for extreme acts of pressure, threats and violence by the authorities? In the past, it was the branding of people as communists, as sympathisers with the Soviet Union, that marked them out for extreme state mistreatment. Or people would be branded ‘the Enemy Within’ – in Thatcher’s infamous words – as a justification for their violent repression. See the Miners’ Strike of 1984/85. In more explicitly tyrannical regimes, you would be demarcated as a wrongthinker or enemy of the state or troublemaker as a way of justifying your repression. Today, as Canada shows, it’s a little different. Today the way that ordinary people are buttered up for police battery, marked out as ‘suspect’, publicly branded as deserving of censure and punishment, is through being called ‘phobic’, insufficiently woke. The language might be more PC, a tad less McCarthyite, but the end result is the same: people are punished on the basis that they are beyond the pale, that they carry incorrect thoughts and beliefs that could potentially pollute the nation. Trudeau is the modern Joe McCarthy, essentially writing certain people off as enemies of wokeness, and fundamentally as enemies of Canada.

The woke have been at the forefront of depicting the truckers as scum, deserving of violent reprimand. Trudeau got in there early, updating McCarthyism by applying it to the ‘anti-woke’ rather than the anti-West. He tweeted that the Freedom Convoy was full of ‘anti-Semitism, Islamophobia, anti-Black racism, homophobia and transphobia’. Fake radicals, such as those ‘trans rights’ counter-protesters in Ottawa and writers at the Park Slope Socialist bible Jacobin, conspired in this state demonisation of the truckers as unwoke. We’ve even had esteemed ‘liberal’ publications denouncing the truckers and their demand for freedom as being typical of ‘white supremacy’. The Washington Post, in one of the most batshit articles it has ever published, said the truckers’ cry for freedom is hard proof that they are white supremacists, because ‘the notion of “freedom” [has been] historically and remains intertwined with Whiteness’. Someone should go back in time and tell this to Frederick Douglass and Harriet Tubman and all the other black people who fought so hard for the freedoms that today’s comfortable, fragile, fainthearted left takes so grotesquely for granted.

So, wokeness is not just a political irritation. It is not just a pose struck by universities and other institutions that want to appear relevant and cool. No, it is a key component of the new class politics. It is a central ideological wedge between the new elites who justify their rule on the basis of both their managerial capacities and their moral correctness and the working classes who have tired of this patrician form of governance. Wokeness is the means through which the upper classes distinguish themselves from the throng and justify their domination of society and our lives, and, as Canada now shows, it is also the instigator of state violence against those who resist and bristle against this domination. Wokeness is the disguise class authoritarianism wears in the 21st century, and anyone who cares for the rights, equality and liberty of working people needs to make a priority of defeating it.