The truckers have changed Canada forever

The Freedom Convoy has shaken Canadian politics to its core. 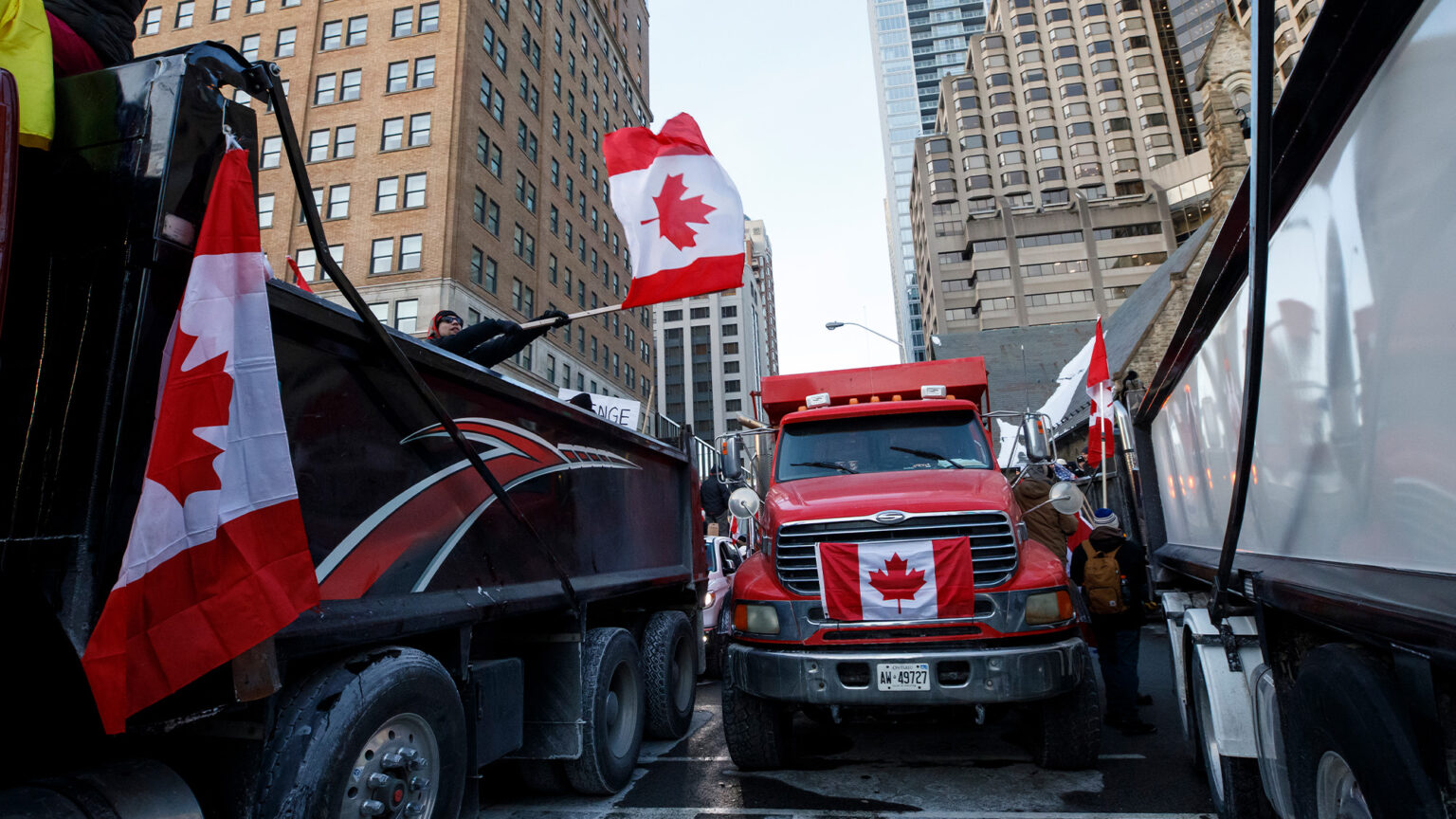 On Monday 14 February, Canadian prime minister Justin Trudeau sent an unlikely Valentine’s gift to his citizens, invoking rarely used emergency powers, which came into effect the next day. This was in response to the ‘Freedom Convoy’ of thousands of truckers and protesters who have gathered in the nation’s capital, Ottawa. Trudeau claimed that the protests were not peaceful, implying that the crisis could not be solved by normal policing under existing statutes. The reality is that, during more than two weeks of protests, Ottawa’s protesters are guilty of little more than municipal traffic and noise infractions. There has been no violence. Nevertheless, two of the protest leaders, Tamara Lich and Chris Barber, have been detained by police under the emergency powers.

The threshold for invoking emergency powers in Canada is supposed to be high. Indeed, similar powers have only been used in the two world wars and, controversially, in 1970, when then prime minister Pierre Trudeau, Justin’s father, used emergency powers to suppress a separatist movement in Quebec. His son’s use of emergency powers, in the context of a peaceful protest, has been criticised by the Canadian Civil Liberties Association, which has argued that the necessary threshold has not been met to justify invoking these draconian powers. It should also be noted that Trudeau and his government have consistently refused to meet and even to listen to the protesters’ grievances, despite the protesters themselves being willing to engage in dialogue.

Strangely, the most problematic element of the protest – a trucker blockade of the Ambassador Bridge, which connects Windsor, Ontario to Detroit, Michigan, over which 25 per cent of US-Canada trade travels – was peacefully resolved the weekend before Trudeau’s proclamation, by the provincial police. Meanwhile, on the same day that Trudeau declared his emergency, another blockade – on the border between Alberta and the US state of Montana – ended peacefully and without the use of force. The police and the protesters ended up hugging each other after the issue was resolved.

As the protests have gone on, sections of Canada’s governing class, especially in Ottawa, have started to sound more like Soviet-era authoritarians than friendly local officials. Earlier this week, following a hack, a list of donors to a Freedom Convoy crowdfunding page was leaked and shared with the media. The illegally obtained donor list has been gleefully shared by public officials, who have relished the chance to expose the private details of their fellow citizens as punishment for exercising their constitutional right to donate to a peaceful protest. Norms of privacy and basic decency appear to have totally collapsed. While those characterised as ‘insurrectionists’ and ‘mercenaries’ continue to seek dialogue and peaceful engagement, large swathes of Canada’s ‘progressive’ elite stand exposed as little more than a latter-day lynch mob.

One root of the present crisis is that the political class and its echo chamber in large sections of the mainstream media had already fixed on a narrative before the protesters had even arrived in Ottawa. Trudeau asserted that the truckers were a small fringe of extremists who held ‘unacceptable views’. It was widely assumed that the protests would fizzle out after a day or two, and the whole thing could be forgotten.

I walked through the protests on the first day, as truckers and other protesters were arriving, and realised immediately that the reality on the ground was nothing like the received narrative. The protesters spanned the demographic diversity of Canada, including young and old people, people of colour and new immigrants. The signs and messages they held up were largely about love, unity, peace and inclusiveness – not the hate and divisiveness I had been told to expect. The many stories I heard shattered the stereotypes that the protesters and truckers were all anti-science, anti-vaxxers, racists, misogynists and would-be insurrectionists.

In fact, some of the protesters, including the convoy organisers, are vaccinated. Others have taken vaccines in the past, such as the annual winter flu shot, but are wary of the Covid-19 vaccines. Some noted the politicisation and divisiveness caused by vaccine mandates, while others objected to the mandates in principle, as a violation of bodily autonomy and freedom of choice. Others were animated by the larger cause of protesting against what they saw as government overreach and the encroachment on individual liberty represented by the whole slew of Covid measures, including lockdowns and other restrictions – many of which remain much more stringent in Canada than in most of the advanced West.

The peaceful civil disobedience that Trudeau is cracking down on has at times felt like a winter carnival, featuring community kitchens, live music and bouncy castles. The reality on the ground is very different from the ‘insurrectionist activity’ and ‘violent intentions’ that the government and large sections of the media seem determined to see.

Ironically, whenever Trudeau meets a foreign leader who is dealing with large-scale protests, he always preaches the gospel of dialogue rather than crackdown. Most notably, when India’s capital was similarly paralysed by a blockade of tractors and trucks, as farmers protested against PM Narendra Modi’s agricultural reforms, Trudeau went so far as to throw his support behind the protests, which lasted more than a year.

Canada’s protesters have not, as yet, achieved their stated objective of removing all federal vaccine mandates and other pandemic-related restrictions. But their impact has been nothing short of seismic on the Canadian political scene. Within days of the convoy’s arrival in Ottawa at the beginning of February, Conservative leader Erin O’Toole, who had been studiously neutral on the protests, was sacked by his own parliamentary party, some of whom are sympathetic to the protesters’ demands. Ottawa’s police chief, Peter Sloly, resigned on Tuesday following widespread criticism of his mishandling of the protests. Meanwhile, facing the heat from a public frustrated and fatigued by restrictions, the premiers of Canada’s two largest provinces, Ontario and Quebec, hastily announced plans to accelerate the return to normality. A proposal in Quebec to ‘tax’ the unvaccinated has also been dropped.

Polls show that while many Canadians disagree with the convoy’s tactics, an increasing percentage are sympathetic to the protesters’ goals of ending pandemic-related restrictions on normal life. Even Trudeau was forced to concede that the very protesters he had derided as an extremist fringe had in fact struck a chord with many Canadians.

Canada’s state of emergency is a bad look both for Trudeau and the country he leads. His carefully cultivated ‘progressive’ and ‘woke’ image, which remarkably withstood even images of him in racist blackface, lies in ruins, as does Canada’s reputation as a country of pragmatic and caring folk who resolve matters peacefully. What the protests have made clear is that Trudeau and the power elite surrounding him have totally misjudged what can only be described as a grassroots awakening among those Canadians who do not share the presumed progressive consensus on big government and rule by mandate.

Remarkably, Trudeau has faced little pushback from the mainstream political parties, who are fragmented and ineffective. So far, they have allowed a leader with a minority in parliament, who lost the popular vote in the last two elections, to essentially have his way. That may be beginning to change.