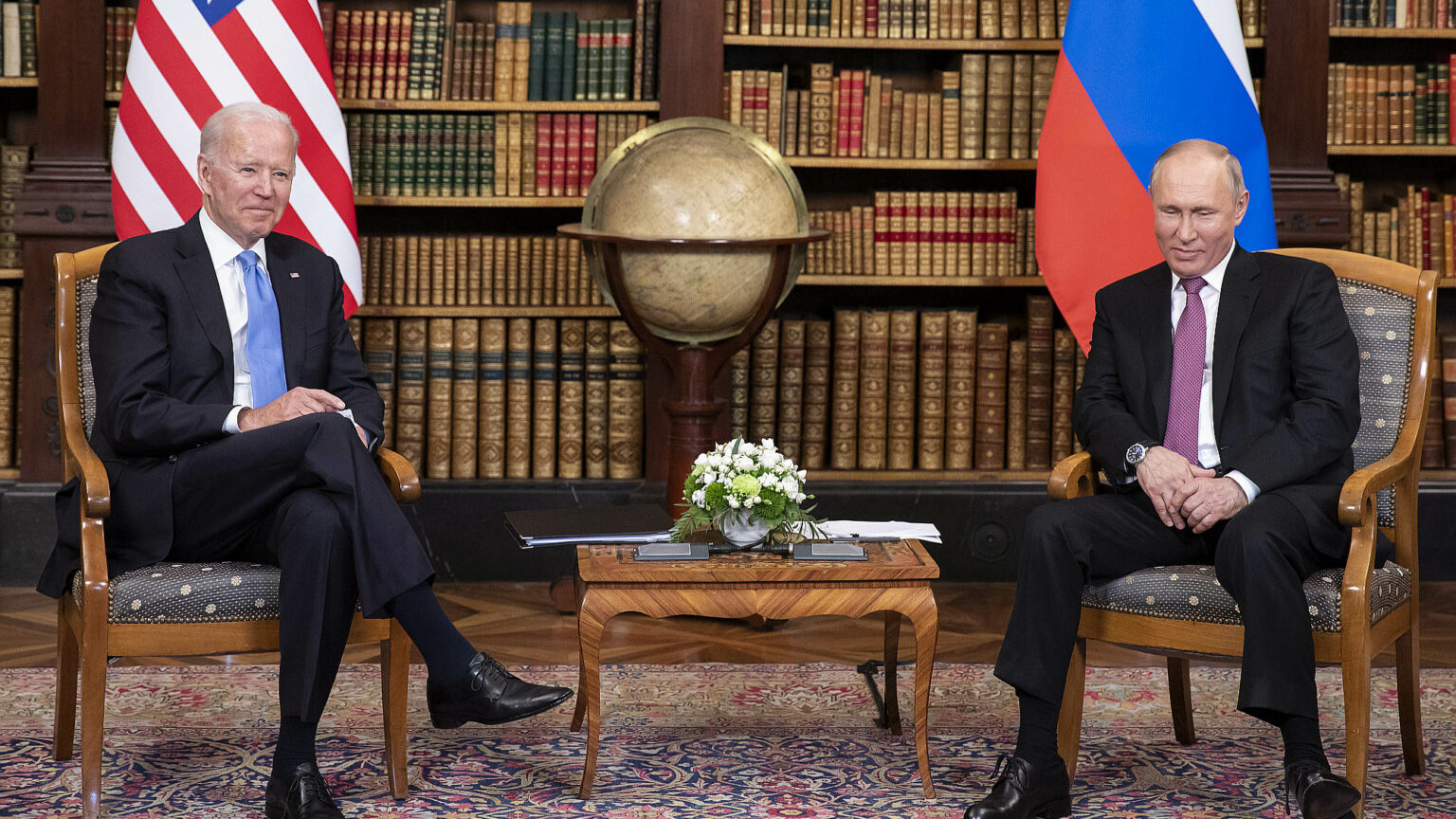 Ukraine and the new balance of power

This crisis is exposing the exhaustion of the West – and pushing Russia and China closer together.

It is not easy to make sense of the complex and contradictory forces fuelling the crisis in Ukraine. While Western governments issue alarmist warnings about an imminent Russian invasion, the Ukrainian government is busy urging calm and telling Western powers to stop spreading panic.

Indeed, much of the talk of war with Russia is coming from outside Ukraine. Within Ukraine, most people are not thinking about a Russian invasion, imminent or otherwise. As a recent poll revealed, they are far more worried about other issues, such as political corruption, inflation and unemployment. Only eight per cent of respondents said they were concerned about relations with Russia.

The roots of the Ukraine crisis

The roots of the current geopolitical crisis can be traced back to the aftermath of the Cold War. This was a moment of Western triumphalism. Throughout the 1990s, Russia was reminded time and again by the West that it would neither be taken seriously nor treated as a serious actor on the global stage. As British historian Adam Tooze explains, it was assumed that the world’s critical borders ‘would be drawn by the Western powers, the US and the EU, on their own terms and to suit their own strengths and preferences’. Russia was treated as if it was irrelevant.

This troubled Russian leaders. In particular, they feared that NATO would attempt to integrate Russia’s neighbours into the Western fold, and thereby threaten Russia’s security and territorial integrity. These concerns were heightened when, in 2008, the Bush administration decided to encourage Georgia and Ukraine to aspire to NATO membership.

In many ways, the origins of the current Ukraine crisis can be traced to this point, in the late 2000s. From then on, Russia became increasingly unhappy with being forced to accept whatever Western powers decided. The US was aware of Moscow’s agitation, but, as Dmitri Trenin, director of the Carnegie Moscow Center, puts it, the US ‘preferred to ignore [Russia], since it viewed the country as a waning power’.

Tensions came to a head in 2014, during a period of civil and political unrest in Ukraine. Russia, concerned about Ukraine’s turn towards the EU and NATO, decided to annex Crimea. This showed that Russia’s aspiration to be taken seriously could no longer be ignored.

Since 2014, Russia has sought to consolidate its position by forging an informal alliance with China. Moscow must now feel that the global balance of power has slightly shifted in its favour. The mobilisation of large-scale Russian forces on the Ukrainian border is designed to force the US to finally recognise Russia’s security interests.

As Trenin argues, the aim of Russia’s foreign policy is not to restore the Soviet Union, as some suggest:

‘Rather, the idea is to reframe security in Europe – particularly in Europe’s east – as a contractual relationship between the two principal strategic actors in the region, Russia and the US/NATO, thus turning the page on an era when it was the business of the US alone. This is regarded as a vital national security interest. If Russia cannot achieve its goal by diplomatic means, it will need to resort to other tools and methods.’

Russia has much more at stake in the current dispute than the US. Barack Obama even acknowledged, in 2016, that the US was not willing to go to war over a Russian invasion of Ukraine. At the time, the Washington foreign-policy establishment shared Obama’s view.

Today, matters are more confusing. Though the Biden administration clearly does not want to go to war over Ukraine, it is reluctant to recognise the geopolitical reality with as much honesty as Obama. So, instead, the West and the US in particular have continued to raise Ukrainian expectations of NATO membership, while tacitly accepting that such a move is unlikely due to the potential ramifications. It is enough for the West simply not to foreclose the possibility of membership.

Part of the problem with assessing the unfolding drama over Ukraine is that much of it is driven by domestic party-political concerns, particularly in the US. There, Russia has long been the subject of a high-profile propaganda campaign depicting it as a rogue pariah state. It has been constantly accused of corrupting the democratic process, from interference in the 2016 US presidential election to meddling in the Brexit referendum. Anti-Russian sentiment is thus driven by domestic political concerns, rather than geopolitical reality.

One of the regrettable consequences of this propaganda campaign is that it distracts from the Russian state’s actual wrongdoing. Indeed, Moscow’s targeting of dissidents within and without Russia remains a matter of serious concern.

It is important to underscore the fact that both Russia and the US, as well other leading Western nations, are fundamentally status-quo powers. They do not want to initiate a full-blown war over Ukraine, from which they all have far more to lose than to gain.

The demands which Russia put to NATO and the US over the past month are self-consciously maximalist negotiating tools – rule out Ukraine joining NATO, etc. And they are more than matched by the blank refusal of Western powers to make any concessions. As matters stand, neither side is in the position to back down and yet it is also clear that neither side desires an all-out war.

The fact that both sides are status-quo powers does not mean that the situation is stable, however. All sides in the conflict are more than prepared to exploit each other’s weakness. So over the past decade or so, Russia has taken advantage of the West’s incompetent interventions in Syria and Libya to make significant gains. And Russia has also sought to expand its influence in parts of Africa, through the use of private-security contractors.

Matters are also complicated by the differing domestic pressure on the national governments involved. Both France and the UK have made contradictory and at times aggressive noises towards Russia, presumably motivated by domestic political and electioneering calculations. The EU wishes to play a more serious role on matters that directly impact on European security. But its capacity to do so is compromised by Germany’s informal entente économique with Russia, dependent as it is on Russian energy.

There is also a real danger that Western diplomats and foreign-policy experts are really not up to the task of dealing with an increasingly troublesome and complex landscape. Western powers’ humiliating withdrawal from Afghanistan exposed their intelligence failings and lack of diplomatic skill. Not that Washington seems to recognise this. David Ignatius, a columnist and State Department insider, wrote recently that ‘the reversals in Afghanistan are confounding for a Biden national-security team that has rarely known personal failure… These are America’s best and brightest, who came to the messy endgame of the Afghanistan war with spotless résumés.’

If Biden’s national security team is composed of America’s ‘best and brightest’, then Washington is in big trouble. Like their peers in the British Foreign Office, they may have ‘spotless résumés’ but they are wanting in basic diplomacy. They lack the language skills, the intellectual sophistication and the moral resources to face up to a determined and risk-taking foe. The fact that many Western diplomats are out of their depth and lack a sophisticated grasp of global realities diminishes their capacity to pursue their own nations’ interests. Whether their Russian or Chinese colleagues also suffer from a similar diplomatic-skill deficit is unclear. But for a peaceful resolution to the Ukraine crisis, we need diplomats possessed of the wisdom to understand the issues at stake.

New York Times columnist Bret Stephens recently wrote a column called ‘Bring back the free world’, in which he expressed nostalgia for the Cold War. That was a moment in which global affairs, he said, appeared as a straightforward battle between good and evil.

His yearning for the seeming moral clarity of those years is understandable. But the Cold War idea of Western nations as an alliance of the ‘free world’ is long gone. It has been replaced by an incoherent alliance of disoriented Western nations, which have sought some semblance of moral purpose in a series of incompetent and pointless missions – Afghanistan, Iraq, Libya and Syria.

Moreover, the balance of geopolitical power today is very different to that of 30 or 40 years ago. The bipolar balance of Cold War power has given way to the unipolar dominance of the US. But today, that unipolarity has often only exposed the limits of American power. Although it remains the single most powerful nation on Earth, the US is a regional rather than a global hegemon. In this sense, it is just a more powerful version of another regional hegemon — namely, Russia.

For its part, Russia has upgraded and modernised its military capability in recent years. In both military and economic terms it has become a far more formidable power than it was during the two decades following the disintegration of the Soviet Union. The West’s power over Russia is further limited by Russia’s alliance of convenience with China. This diminishes the effectiveness of any Western economic sanctions. China is Russia’s largest trading partner, and together they have established an alternative international payments system, which protects them from Western attempts to prevent Russian access to the global banking system.

It was an act of geopolitical stupidity for Western powers to create an environment that allowed this informal Chinese-Russian alliance to flourish. Given the historical conflict of interest between China and Russia, it is evident that these two nations are not natural allies. But by constantly treating China and Russia as moral inferiors, lecturing both about their democratic deficits and threatening them with sporting boycotts, Western powers have driven Moscow and Beijing into each other’s arms.

Western powers find themselves in a difficult situation. The moral authority the West enjoyed during the Cold War is exhausted. And its dealings with Russia and China have exposed its lack of unity. It is likely that the further erosion of the alliance once known as that of the Free World will be the most certain outcome of the Ukraine crisis.