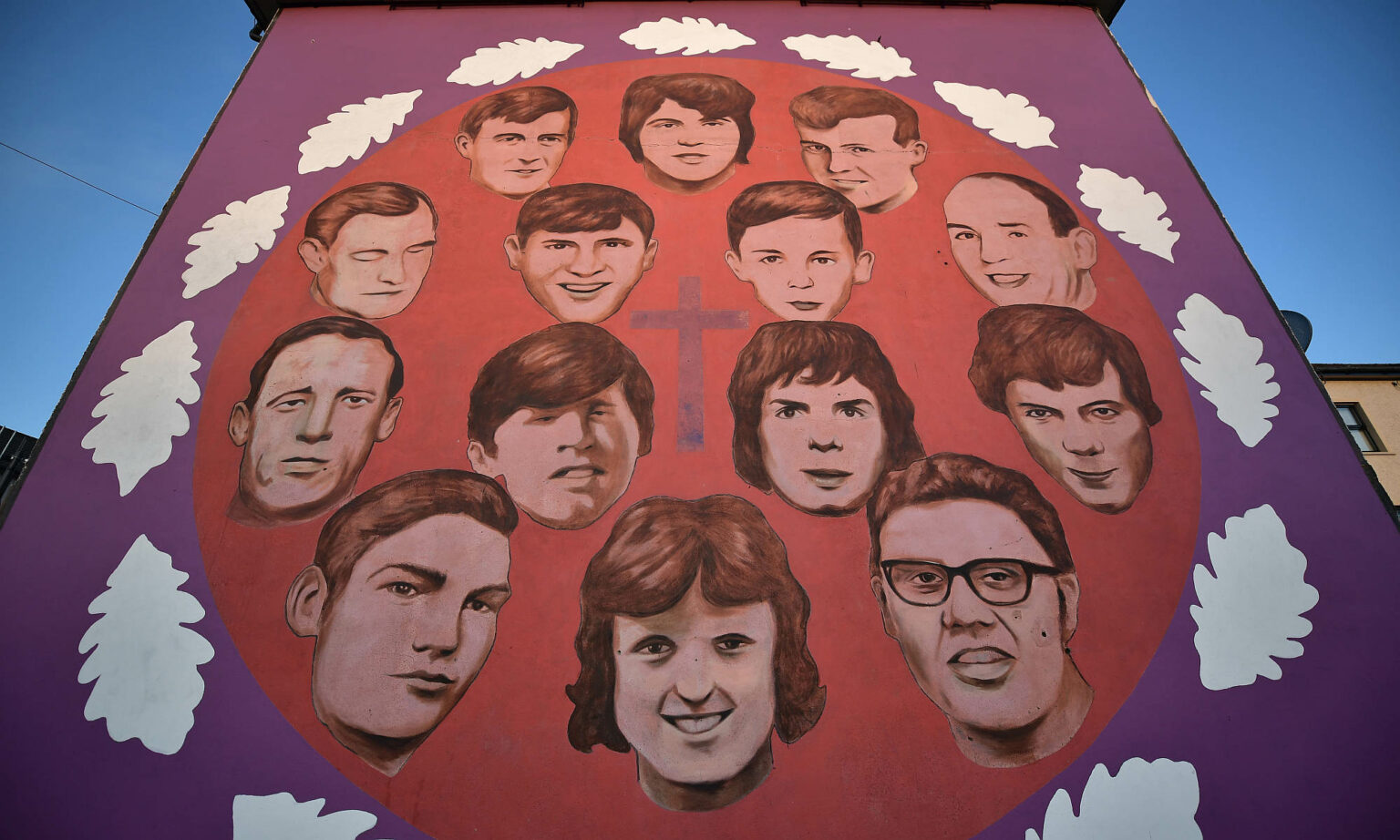 We must never forget the brutality of British rule in Ireland.

Fifty years ago today, British troops from the Parachute Regiment were sent to Derry to commit an atrocity. They entered the Bogside, where unarmed civilians had gathered for a civil-rights march. Then they opened fire, killing 13 people. Another person died a few months later from his injuries, taking the death toll to 14.

This was to become known as Bloody Sunday.

Sadly, it was not an aberration. Just four months earlier, the paras had murdered 11 unarmed civilians in Ballymurphy, West Belfast, the housing estate where I grew up. No investigations were carried out and no member of the British Army was held to account. But then atrocities like these define the British state’s involvement in Ireland.

There were actually four ‘Bloody Sundays’ under British rule in 20th-century Ireland. The first was on 31 August 1913, during the Dublin lock-out industrial dispute. The police, under instruction from the British state, charged crowds gathering to hear union leader Jim Larkin speak, killing two and injuring over 300 others.

Then there was the Bloody Sunday of 21 November 1920. Earlier that day, the IRA had executed several British intelligence agents and spies. Bent on revenge, soldiers and police opened fire on spectators at a Gaelic football match in Croke Park, Dublin, killing 14 people – women and children among them – and seriously injuring 60 more. That evening, Dublin Castle, the centre of British operations, issued a press release slandering the dead as ‘terrorists’. Only much later would an internal British investigation concede the shootings were ‘indiscriminate and excessive’.

The third Bloody Sunday arrived on 10 July 1921, during Partition and the Belfast Pogrom. Loyalists and police armed by Winston Churchill attacked isolated Catholic enclaves in central and west Belfast. This led to a clash with the IRA, which was defending the enclaves, leaving 16 dead and 160 houses destroyed – 150 of them Catholic.

And then of course there was Bloody Sunday, 30 January 1972. Of the 14 people who eventually died, nearly half were children. The British Army claimed soldiers had come under fire from gunmen, snipers and nail bombers. British authorities spun Bloody Sunday as they had spun Bloody Sunday at Croke Park in 1920 – as the defensive action of soldiers fearing for their lives. Northern Ireland prime minister Brian Faulkner blamed the dead and the IRA for the violence.

In the days and weeks that followed, there was no shortage of British media outlets willing to peddle the British Army’s line. The press blamed the victims and exonerated the guilty. The Daily Mirror announced that ‘four of those killed in the battle of Londonderry were on the list of wanted IRA men’. The Daily Express claimed the Army had been embroiled in a gun battle. Another paper even praised the paras for their calmness under pressure, which it suggested saved civilians’ lives. 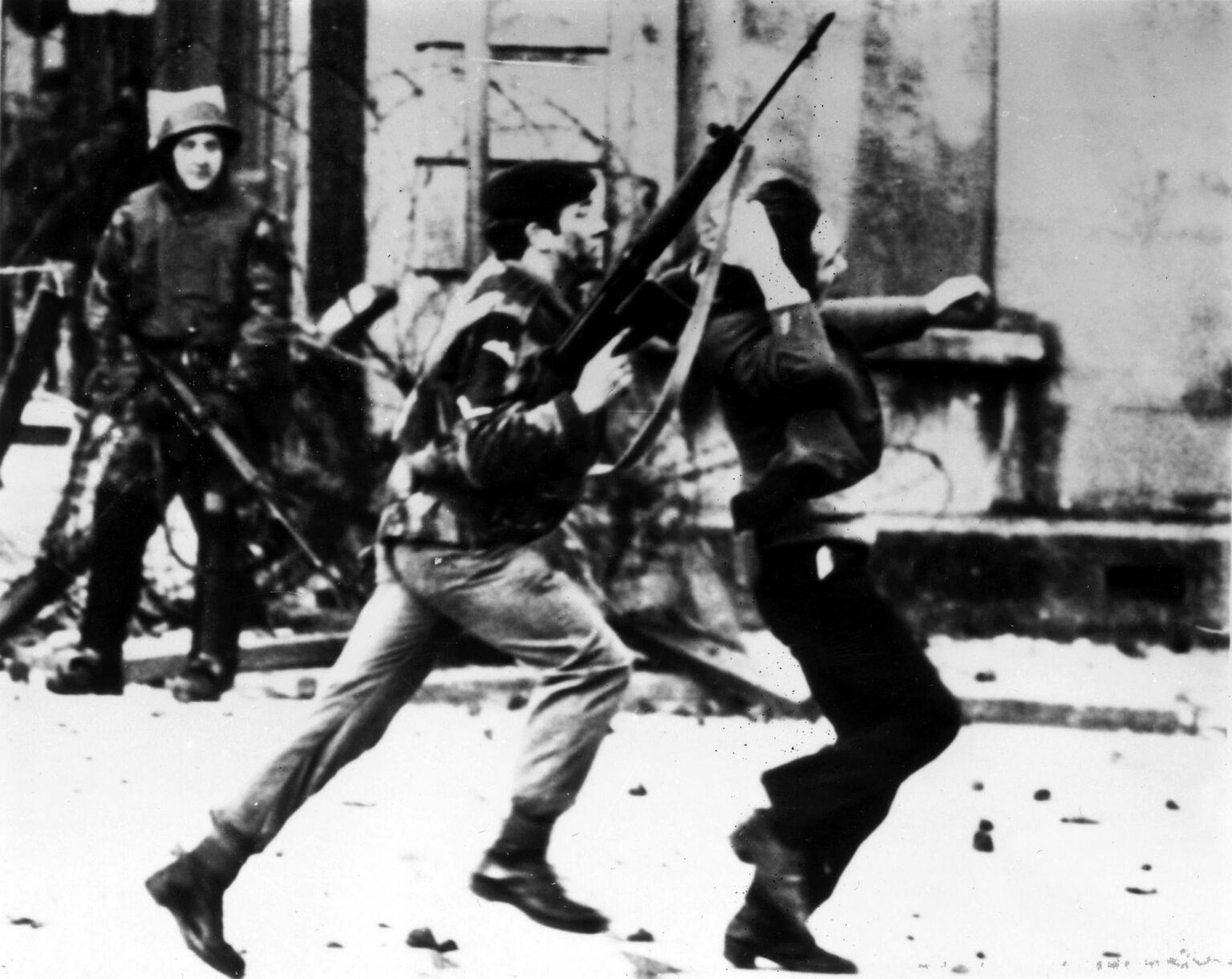 A British paratrooper takes a captured youth from the crowd on Bloody Sunday, 30 January 1972.

What all these headline stories had in common was that they were lies – lies repeated by Conservative home secretary Reginald Maudling in parliament. Redress was near enough impossible. Mid Ulster MP Bernadette Devlin tried to counter the disinformation, but was prevented from speaking by the Commons speaker, Selwyn Lloyd. When The Sunday Times’ most experienced war correspondent, Murray Sayle, filed his article in the days after the massacre, contradicting the official lies, his editor refused to publish it and the piece was buried (1).

Instead, the British public was inundated by lurid press accounts of dead Irish Catholics found with nail bombs in their pockets and gun residue on their hands. The media had effectively taken the side of the military. The absence of critical journalism made it all too easy for the Widgery Tribunal to whitewash the truth of Bloody Sunday in its Army-supporting report, published three months after the events of 30 January.

Nevertheless, the truth did soon emerge. Italian photojournalist Fulvio Grimaldi was reporting from the Bogside when paratroopers opened fire on demonstrators. He narrowly escaped death himself. ‘I have seen many civil wars and revolutions and wars’, he explained in a 1972 account of the massacre, ‘but I have never seen such cold-blooded murder, organised, disciplined, planned murder’ (2).

French photographer Gilles Peress was also there. In a recent account, he described his shock as he caught on camera the moment Patrick Doherty was shot dead by paras. ‘I didn’t see a man with a gun’, Peress said. ‘I saw people alive, no gun and then dead.’ (3)

Moments after a soldier fired at Peress himself, he began photographing Bernard McGuigan, lying dead in a thick pool of his own blood. A priest came and gave McGuigan extreme unction. ‘I was in tears, but I was still shooting the pictures.’

‘I saw a young fellow who had been wounded, crouching against the wall. He was shouting “don’t shoot, don’t shoot”. A paratrooper approached and shot him from about one yard. I saw a young boy of 15 protecting his girlfriend against the wall and then proceeding to try and rescue her by going out with a handkerchief and with the other hand on his hat. A paratrooper approached, shot him from about one yard into the stomach, and shot the girl in the arm.’ (4)

Seventeen-year-old Jackie Duddy was shot and bleeding heavily. Hugh McMonagle pleaded with soldiers, ‘Please help us, this wee boy’s dying’. The soldiers just clapped, and Duddy died shortly afterwards (5). The image of friends and neighbours carrying Duddy’s body away from the carnage would become one of the most famous images of Bloody Sunday. It is marked today by a huge mural on the Bogside, close to the Free Derry wall. 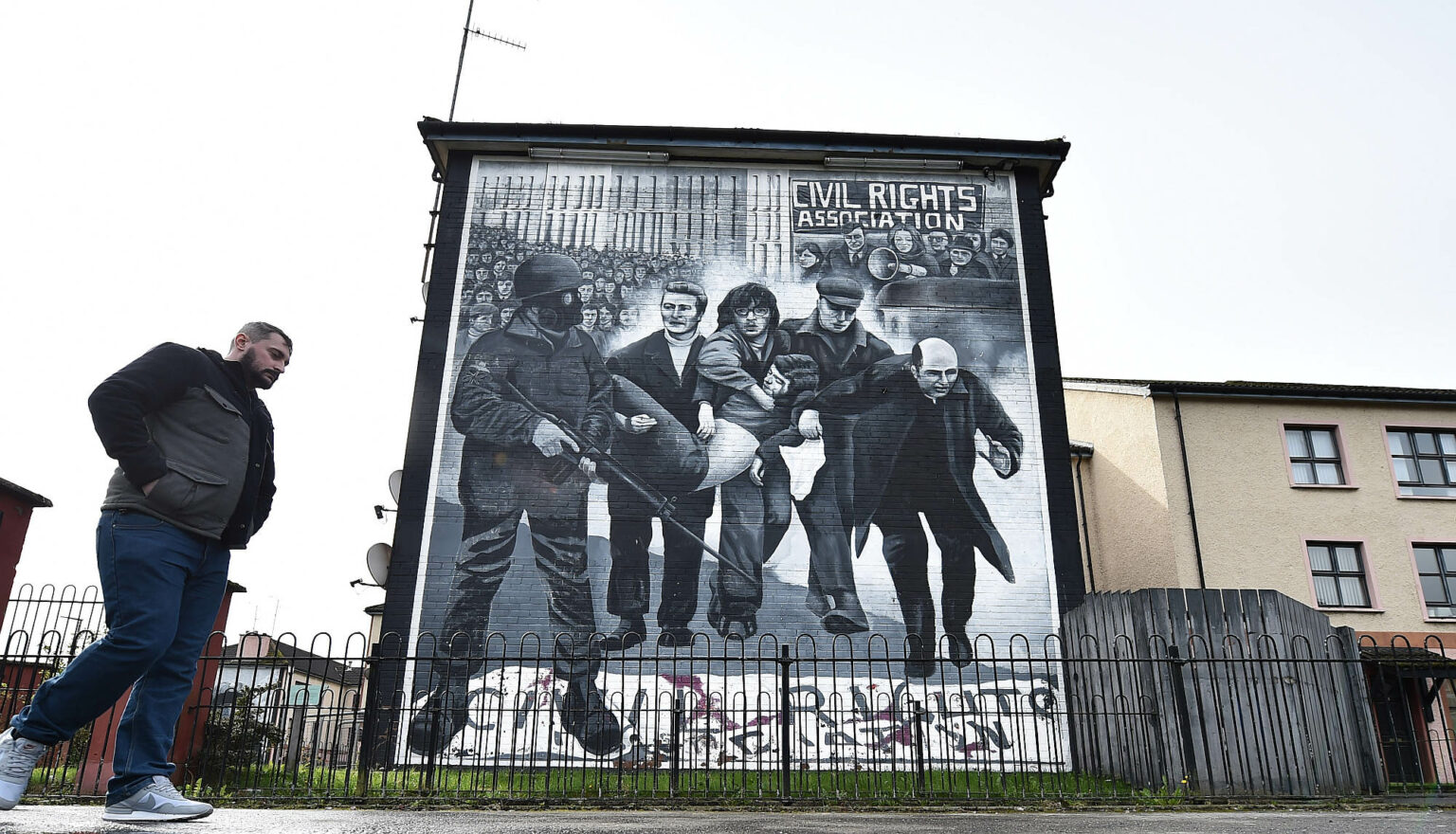 The Bloody Sunday mural depicting the body of Jackie Duddy.

It was left to the republicans to reveal the real thinking and motivation of senior British Army commanders. The IRA had bugged the phone landline to the operations room in Victoria Barracks, which served as the main security-force communications centre for the Royal Ulster Constabulary and the British Army in Derry. According to conversations captured on tape, General Ford, then deputy commanding officer in Northern Ireland, was jubilant at the outcome of the paras’ actions.

In one of the recorded conversations between two operatives hours after the paras had killed 13 people, one is heard telling the other: ‘He [General Ford] was lapping it up. He said it was the best thing he’d seen for a long time… He said this is what should happen. He said we’re far too passive.’

The tape also features journalist and historian Max Hastings, who was then working for the BBC, talking to the Derry communications room and asking about the rising death and casualty figures. ‘We may have to come back to Derry [from Belfast] if your soldiers carry on shooting people at such a remarkable rate.’ The man on the other end of the line says: ‘Ha ha. Well yes, I’m from Belfast myself and I think it is a very good trend myself.’

In other parts of the tape, one man describes the killings as a ‘pretty good bloodbath’. Another refers to the ‘beautiful picture’ of a priest over a man lying dead on the ground. The tape, which was forwarded to the Derry Journal in 2000, blew a giant-sized hole in the British government’s misinformation campaign.

For many years, I would travel on a chartered Ulster bus with others to attend the Bloody Sunday commemoration. At times we were taken off the bus by soldiers and the RUC. We were searched, harassed and deliberately held back on occasions so we would miss the march. A couple of times we also had the windows of our bus smashed in by loyalists on the outskirts of Derry.

But sitting on the bus I always felt it a privilege to walk the same route as the people in Derry who were attacked in 1972. I vowed to myself I would never forget. Like hundreds of thousands of others, I never have.

I remember those who were killed in Derry on that horrific day. And I remember those killed in Ballymurphy the year before. Father Hugh Mullan, who was not carrying a gun or bomb, as paratroopers claimed after they shot him. He was actually waving a white babygrow, as he went to help a wounded man and administer the last rites. I remember Frances Quinn, shot dead as he tried to help a wounded woman. I remember Daniel Teggart, shot repeatedly in the back as he lay injured on the ground. And I remember Joan Connolly, who was left to die a slow and lonely death in a field after being shot. Neighbours were held back, unable to get to her, as British troops continued to fire at anything that moved. It was several hours before anyone could reach her, and by then it was too late.

The dead and dying were picked up by British soldiers before being manhandled and dumped like sacks of potatoes on the barracks floor to rot. Some soldiers had a sweepstake on how many they killed. When relatives went to the barracks to enquire about their loved ones, or to retrieve their bodies, they were mocked, sneered at and manhandled. One of the dead had their pockets filled with bullets, in an attempt to frame him as a gunman. Another young woman, desperately searching for her father, had to listen to soldiers sing, ‘Where’s your papa gone’, a well-known pop song at the time. But they knew where he had gone, because they had killed him.

To the families of those killed in Ballymurphy and on Bloody Sunday, and the many others who fought for the truth – we salute you.

(2) Massacre at Derry, produced by the Irish Civil Rights Movement, 1972

(4) Massacre at Derry, produced by the Irish Civil Rights Movement, 1972