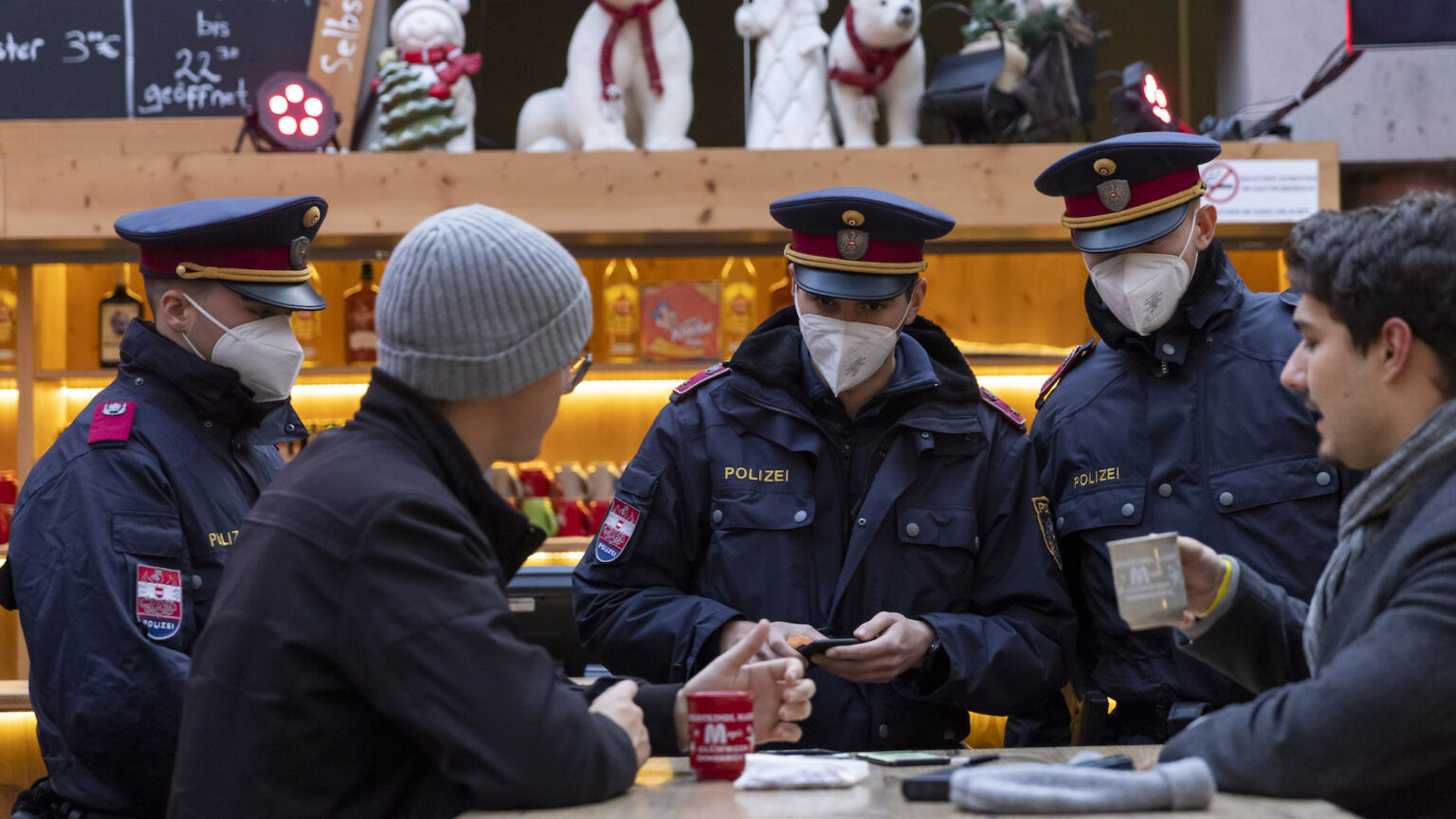 Europe is on a precipice. It has marched, blindly, towards something very much resembling tyranny. Austria will shortly criminalise those who refuse the Covid vaccine. Germany looks set to follow. Ursula von der Leyen, president of the European Commission, is wondering out loud if every member state should do likewise and make offenders of those who reject this form of medication. In Italy you are deprived of your livelihood rather than your liberty if you say no to vaccination: the unvaxxed are not permitted to work. Anywhere. In Greece, everyone over the age of 60 must pay the government 100 euros for every month they remain unvaxxed. As if the Greek government, in cahoots with its masters in Brussels, had not immiserated Greek pensioners enough already.

Police in Rotterdam opened fire on people protesting against Covid restrictions. Three were seriously injured. Austrian cops have wielded batons and shields against the thousands who took to the streets of Vienna to say no to mandatory vaxxing. In Brussels, the black, bureaucratic heart of the EU project, water cannons and tear gas were unleashed upon citizens agitating against vaccine passes. The irony is almost too much: in the European quarter of Brussels, the very part of Europe in which the modern European sensibility was forged by politicians, experts and technocrats, ordinary people make a blow for freedom and the forces of this supposedly liberal new continent beat them down. Rarely has modern Europe’s bluster about ‘human rights’ and ‘respect’ been so savagely exposed.

What is happening in Europe right now is nothing short of terrifying. We are not merely witnessing another round of Covid restrictions. This isn’t just the introduction of another set of emergency measures that some people believe are necessary to stave off the latest Covid wave and the Omicron threat lurking on the horizon. No, we are living through a chilling overhaul of the entire relationship between the state and the individual, with the state empowered to such an extraordinary degree that it can now instruct its citizens on what to inject into their bodies, and the individual so politically emaciated, so denuded of rights, that he no longer even enjoys sovereignty over himself, over that tiny part of the world that is his own body and mind. We are witnessing the violent death of European liberalism and the birth pangs of a new and deeply authoritarian era.

Many seem not to recognise how serious a development mandatory vaccination is. Even those of us who are pro-vaccination, who have been happily vaxxed against Covid-19, should look with nothing less than horror upon the proposal that it should be an offence not to be vaccinated; that a citizen should be fined thousands upon thousands of euros if he refuses this treatment. One of the ideas being discussed in Austria ahead of its mandatory vax law that will be introduced in February is that citizens who refuse vaccination will be summoned to a local court. If they ignore the summons twice they will face a fine of 3,600 euros. If they continue ignoring the state’s demand that they receive medical treatment that they do not want, they’ll be fined 7,200 euros. These are life-ruining fines. There is no talk – yet – of imprisoning people who reject the vaccine, but the Austrian state is making it crystal clear that it will happily wield its power to propel the unvaxxed into destitution.

Germany has already enforced a lockdown of the unvaccinated – that is, it has used the full force of the law to divide the populace between those who have made the right medical decision, and thus may enjoy some crumbs of liberty, and those who have not, and thus deserve nothing less than house arrest. Now, outgoing chancellor Angela Merkel says mandatory vaxxing is likely to be introduced early next year. Ursula von der Leyen seems to think that every EU member state should force vaccination upon its citizens. How to ensure that everyone gets vaxxed ‘needs discussion’, she said recently. We must ‘potentially think about mandatory vaccination’, she continued. The 500million inhabitants of the European Union, of this supposed bastion of human rights, this political union we were told was necessary to preserve the dignity and freedom of modern Europeans, face the prospect of a neo-imperial diktat instructing them to receive medical treatment or else face severe consequences.

We underestimate at our peril just how grave an assault on personhood mandatory vaccination represents. To my mind, forced vaccination is such an obscenity that even justice secretary Dominic Raab’s assurance that it won’t happen in the UK was far too soft for my liking. ‘I don’t think’ it will happen here, he said. Don’t think? He should have said it will never happen here, over my dead body, because it would represent such an intolerable assault on the Enlightenment-derived liberties upon which our nation is built. Everyone is saying mandatory vaccination goes against the Nuremberg Code, which insists voluntary consent must be given for medical intervention. But the ideal of individual sovereignty goes back much further than that. In his Letter Concerning Toleration (1689), the great Enlightenment philosopher John Locke sought to ‘settle the bounds’ between the individual and officialdom. He wrote that even if a man ‘neglect the care of his soul’ or ‘neglect the care of his health’, still the authorities have no right to interfere with him. ‘No man can be forced to be… healthful’, he wrote.

To Locke, as to other great European thinkers whose ideas gave rise to our Enlightened continent, the desire to ‘save’ an individual is not a good enough reason to meddle with his soul or his body. ‘God Himself will not save men against their wills’, he wrote. Yet where God once failed, the EU hopes to succeed. Where even the Almighty once feared to tread, held back by the small matter of man’s will, of man’s right to govern his own soul and body, the bureaucracies of 21st-century Europe will now rush in. They will brush aside the apparently trifling matter of bodily autonomy, they will discard the rights of self-government hard fought for over generations, and cajole people by brute law to submit themselves to medical intervention.

This spells the end of freedom as we know it. Bodily autonomy is the foundation stone of self-government, and self-government is the thing that gives freedom meaning. If we do not enjoy sovereignty over our minds and our flesh, then we are not free in any meaningful way. And it won’t just be the minority of people who feel forced to receive the vaccine whose freedom will suffer under this new regime of state power over people’s bloodstreams and muscles and flesh – everyone’s freedom will. The state diktat determining that only those who receive a certain form of medical treatment will get to enjoy freedom will make freedom itself contingent upon doing what the state wants you to. Even the vaxxed will not be truly free people in this world. Rather, we will be the beneficiaries of state favour, the enjoyers of small privileges, in return for our agreeing to receive an injection. We will have a license from on high to go about our daily lives. And we will know that that license could swiftly be revoked if we refuse medical treatment in the future. The redefinition of ‘freedom’, the making of liberty contingent upon submission to medicine, will throttle the rights of all of us – vaxxed and unvaxxed alike.

Strikingly, there is very little pushback from the so-called human-rights lobby against the proposed new regime of forced medication. Europhiles in the UK and elsewhere – the kind of people who assured us the EU was the great modern defender of the dignity of the individual – are meek as mice in the face of these state threats to strongarm citizens into medical compliance. It wasn’t meant to be like this, you see. It was Brexit Britain, they said, that would become a hotbed of deranged authoritarianism, while the EU would hold a candle for the modern principles of rights and respect. And now that the opposite has proven to be the case, they look the other way, or they subtly give their nod to what amounts to a tyranny of the state over the souls and flesh of individual human beings. European liberalism is dying, the European Union stands exposed as a seat of extreme authoritarianism, and the future of this continent looks very uncertain indeed. Covid will look like a blip in the affairs of man in comparison with the fallout from this political and moral crisis of the European continent.