We need to revive public debate

Ordinary people arguing, in person, about the issues that matter is the very essence of democracy. 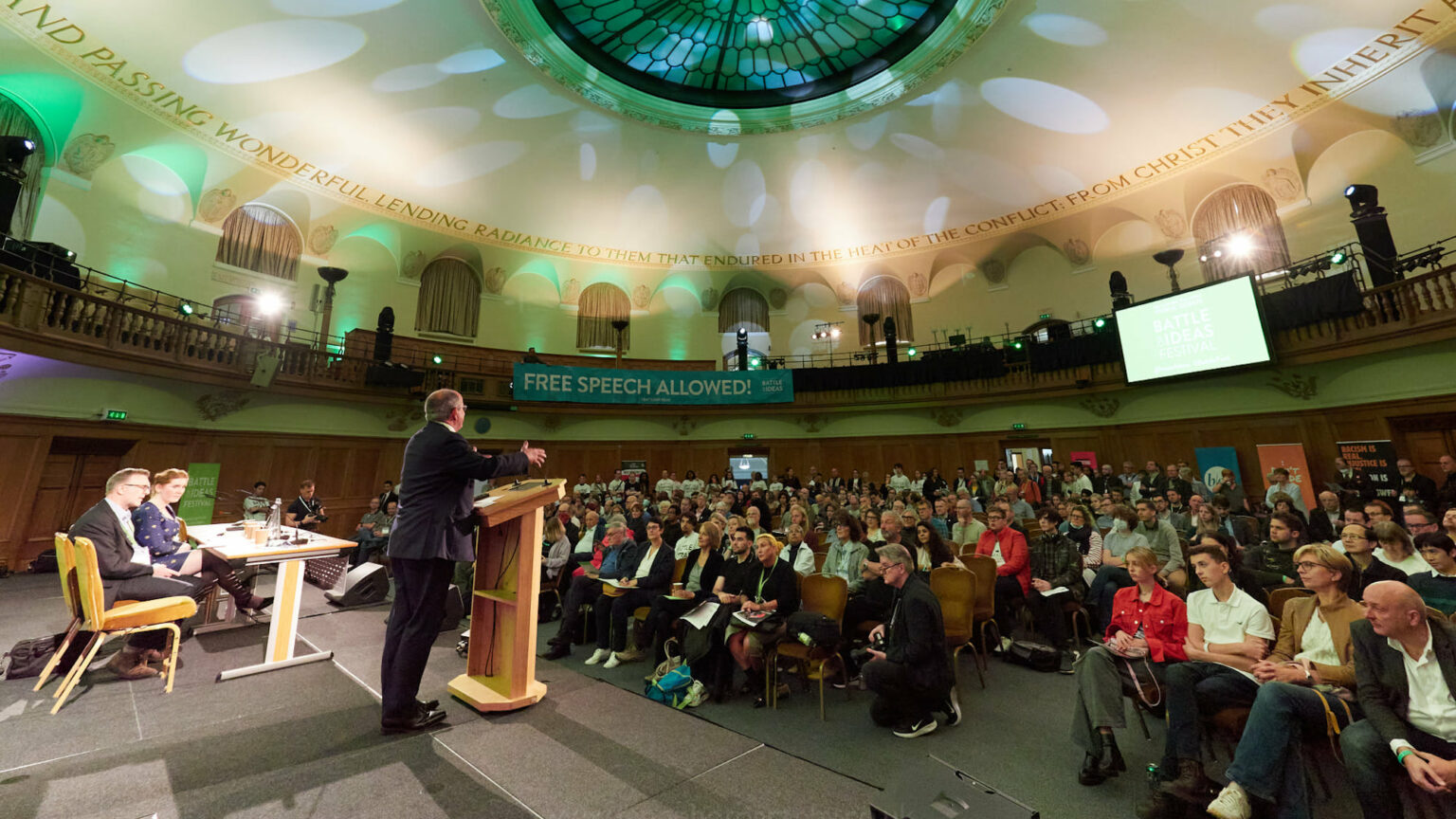 Last week I wrote a short piece for spiked in praise of Jonathan Sumption. It was principally to thank him for reassuring many of us that we weren’t alone in our anxieties, our foreboding, during lockdown. But it was initially inspired by his lecture on democracy at the Sheldonian Theatre, Oxford – and, in that regard, a small something was left unsaid.

The text of Sumption’s speech was, as one might expect, beyond reproach. Lucid, patiently developed yet stressing the urgency of our present predicament, and free of any tiresome ‘passion’ puddling on the surface, the way it seems to in every contemporary communication that wants us to ‘do better’, to insist that ‘this is not who we are’.

But still, it would have to be admitted that the event itself was democratic only in quite a limited sense. Sure, tickets were free to anyone who applied and the chairs, with the exception of the first two rows, were available on a first come, first seated basis. But the opportunity to hear what any of those perched thereon might themselves have had to say about any of it was nil.

Instead, Lord Sumption spoke from his notes, and was then interviewed by a fellow member of the Upper House, Charles, Baron Moore of Etchingham. Finally, the chancellor of the university itself, Christopher, Baron Patten of Barnes, summed up and called time.

I have nothing against the elite and certainly no contempt for these three in particular – far from it. But it would be hard to construct anything more resoundingly privileged, more wood-panelled and gold-leafed, to remind one of one’s own place in the divine order than this collegiate trinity.

So, it was instructive, and refreshing – bracingly so – to attend a very different kind of meeting a week later, in the heart of the Peak District, hosted by the Academy of Ideas.

I won’t bang on about what is so great about the Academy, or this Buxton iteration of the present tour. But what I want to know is, why is this kind of thing so rare? Why are public meetings like this, the building blocks not just of any half-decent narrative in The Simpsons but also of any real democracy, in such short supply? Especially now, when so much seems to be in flux, power grabs are coming faster than Hungry Hippos on Jägerbombs and there is clearly such a burning thirst for a chance not just to hear the arguments, but also, crucially, to speak?

The Buxton event fizzed with all the energy that had been sacrificed to decorum in the Sheldonian – not least because everyone present knew this was no Oxford and Cambridge boat race. Here, they were all going to get a chance to put their oar in. Never mind barons and lords, this was a chance for ordinary Joes to duke it out on the dancefloor of debate.

Sages have over the years observed that humans in conversation oscillate between two states – talking and waiting. This is indeed a shortcoming that many of us can benefit from consciously addressing, and there are few greater pleasures than to spend time talking with someone who has mastered the art of actually paying attention between their own soliloquies.

But the flip side of this aspect of human nature is the elevated levels of attention that are generated in an audience when one knows one might be expected to contribute.

As a stand-up, one of the great tricks of the craft is to give the impression that your listeners are indeed in a two-way street, enjoying a chat – albeit one that it just so happens you are currently dominating. This keeps audiences much more alert than anything resembling a sermon would. And while hecklers are often treated as little better than vandals, often all they have failed to decode is this flattering deception, the lie that the performer is chatting with, not at, them and might give way at any time.

Teachers, too, have to use this trick to keep pupils unlidded. And ‘break-out sessions’ are now as integral to any corporate conference as Powerpoint and coffee, lest those in attendance are tempted to do literally that – break out.

Yet when it comes to politics, give or take the tiny sliver of opportunity offered by the likes of LBC’s wearily patronising James O’Brien and Auntie’s imperious Any Questions?, the people are expected to shut up and listen. No effort is made to cycle the arguments through the only Möbius strip of discourse that leaves a trace – in through the ears and out through the mouth.

A good public meeting is electric. You listen, throughout, not only to get informed, affirmed or provoked, but also to be able to coherently respond when the ball comes your way. To not make a fool of yourself, and hoof it over the bar, or repeat points already nailed. To identify a leaping-off point to launch your chosen attack. A public-meeting audience may not always be woke, but it will certainly be awake.

I have attended a few such debates, whenever I get the chance, in London and in Brighton where I live, but I see no evidence of them being as plentiful in either as they could be. I doubt the rest of the country is much better served. Why not? They are cheap to put on, easily catered and can occupy function rooms during the dead, daylight hours before the evening shift come in for some more fun. They offer sponsors great publicity and a reputation for giving a damn.

I confess a personal taste for the sound of my own voice. I have been a stand-up for 25 years, after all. But the thrill I get, the sense of the decisive moment, when the audience microphone occasionally finds its way into my hands is as great as anything I’ve had on a professional stage.

So, that might just be me and my performer’s ego. But I’d argue the benefits go deeper than the adrenalin rush. Having to put your opinions into solid words once in a while is the truest test of their validity. Many of us don’t even know what we really think until we hear ourselves say it out loud. Nor do we realise just how much nonsense it might be, until we can’t.

In his essential text from the Reagan era, Amusing Ourselves to Death, Neil Postman mourned the sad demise of the literate America that had once been in such a healthy, positive feedback loop with its political processes, during its formative years. A vigorous unashamedly intelligent culture was now lost, he sighed, as typography was giving way to the televisual. The fact that many have now begun to look back fondly at the 1980s, much as Postman did the 19th century, says a great deal about the precipitous decline that is underway.

Postman spoke especially memorably about the legendary Lincoln-Douglas debates that toured America in 1858, and lasted so many hours that crowds would disperse half way through, go home for their supper and then return and regroup for the evening session. He might almost have been speaking of Periclean Athens, or the Roman Senate in the time of Cato the Elder, it seemed a notion so at odds with modern America, and indeed modern Britain too. It would be glorious to restore even a tribute to that tradition.

The Academy of Ideas debate I saw in Buxton had no Lincoln or Douglas but the spectre of civil war was not a million miles away. The motion was on whether we should ‘accept the New Normal’. Other than reporting a near unanimous ‘No!’, I can’t begin to do justice to the range and eloquence of the views expressed on that highly charged issue. But I will say this – anyone who attended could not possibly have continued to nurture the absurd notion, often shared on Twitter, that the Academy’s purpose, its real project, is something approaching propaganda.

It is a key principle, known well I think to Lord Sumption and anyone else who has practised at the bar for more than a couple of months, that you never ask in cross-examination any question to which you are not quite certain you know the answer. You certainly don’t, if you are trying to simply win a case, throw open an entire hour’s discussion to a room full of potentially hostile witnesses, each amplified at your own expense.

This was democracy, in something very close to its true spirit, its essence, and it had a kick as sharp as any spirit this side of the old bottle of aquavit we used to raid from my mate’s dad’s cocktail cabinet for parties.

I can think of no prescription more likely to restore our collective political and mental health than that such events be organised and promoted with the greatest possible urgency up and down the land. The Telegraph and the Guardian, the BBC and GB News, the WI and the National Trust, City and United – all these and many more could profitably sponsor such events. All they have to do is heap up the tinder and watch the conversation ignite.

If all it did was briefly elevate the mood of those present and give them a glimpse of real democratic engagement, the possibility of traction, that would be enough to justify the entire construct. But I suspect it would do a great deal more than that.

And in my darker moments I suspect that is exactly why we don’t see as many of them as we might.