Remainers are still baffled by Brexit

In This is Not Normal, William Davies makes no effort to understand what drove the Leave vote. 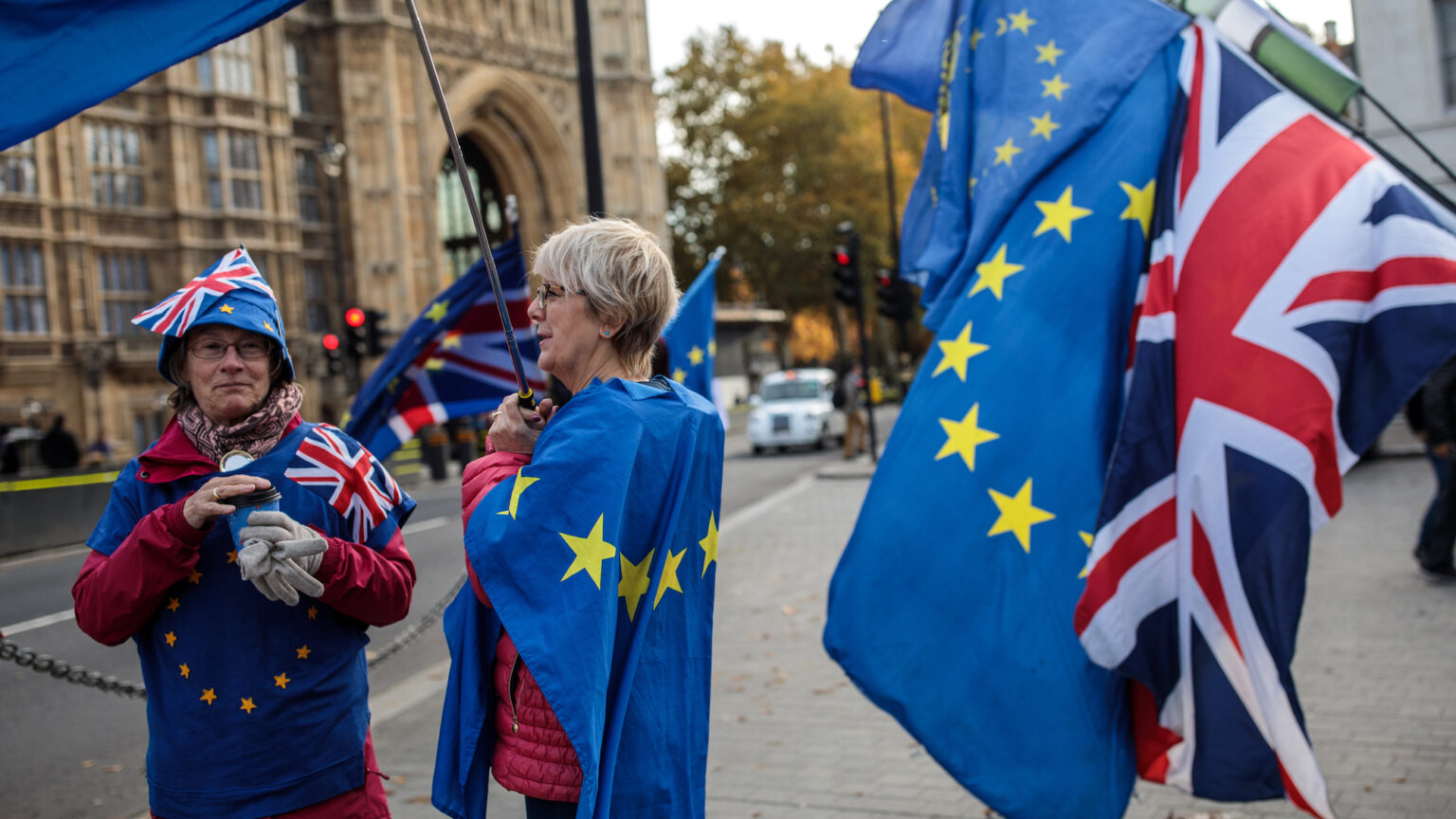 It used to be reactionary fuddy-duddies who railed against everything new. ‘I don’t belieeeve it!’, cried Victor Meldrew in One Foot in the Grave, while Alf Garnett waved his fist at the telly and ‘outraged of Tunbridge Wells’ wrote another letter to the Daily Telegraph. Now it is liberals and radicals who are shaking their heads in disbelief at the modern world.

The leftish-liberal incomprehension of post-Brexit life is neatly summarised by the title of William Davies’ new collection of essays, This is Not Normal. Davies’ main concern is the apparently marked erosion of liberal norms in politics. He says that our democratic system has been wrecked by ‘Trumpian’ politicians, like Boris Johnson and Nigel Farage, who ride roughshod over the truth and liberal values.

If this were a book about the Covid pandemic, and the way that political leaders have torn up the rulebook to suspend parliamentary debate, restrict civil liberties and introduce emergency rule, you might think that Davies had a point. But this is not a book about the government’s authoritarian Covid response. Davies, as the afterword makes clear, approves of all of those restrictions on our freedoms. Instead, this is a book about the consequences of the EU referendum in June 2016, when a majority of voters decided we should leave the EU.

The articles in the new collection, previously published in the London Review of Books and elsewhere, cover the period from 2016 to 2019, when the political class in Britain struggled to cope with the referendum result. For the most part, Davies treats the vote itself as a foolish aberration that ought not to have been taken literally or seriously.

He writes blithely of the ‘shock of Brexit’. But who was shocked? Certainly, his fellow academics and the readers of the London Review of Books were caught off guard. But presumably the 17.4million people who actually voted for Brexit were not. ‘What do they want, these Brexiteers?’, he asks, as if the answer is not obvious: to leave the EU.

Throughout the book, Davies’ Meldrew-like disbelief overwhelms him and the reader. It seems that every single thing that happens – from election results to leadership contests – is astonishing and unexpected. ‘Where to start with the sheer strangeness, let alone the danger of the current situation, in British politics?’, he asks.

One cause of Davies’ bemusement is the sense that ‘facts no longer seem to matter’. Things are so perverse, he says, that the ‘Remainer fixation on facts appears like a form of verbal constipation’. Those he disagrees with indulge in ‘dishonesty about facts’, which ‘bleeds into dishonesty about intentions’. Telling the truth is important, of course. But those who too readily accuse others of dishonesty are often just uncomfortable with different interpretations of events. Finding it difficult to accept that there are alternative views, the insecure critic sees those who disagree with him as outright liars.

Given that the essays reproduced in the book had already been published before it went to print, Davies had an excellent opportunity to check if some of his more forthright predictions had come true. But he did not take it. Neither in the introduction nor the afterword does Davies ever ask himself whether he got things right. To be wrong in the heat of the moment is understandable, but to repeat false predictions again, even with the benefit of hindsight, is not.

For example, This is Not Normal reproduces Davies’ prediction that Britain after Brexit would become a rentier economy marked by low wages. But Brexit has not led to a fall in wages. Although average wages fell during the lockdown, they rose again as we opened up. Davies’ prediction that international finance would abandon the City of London has not come to pass, either.

Boris Johnson’s numerous pledges to increase public spending are also given short shrift. Boris must be lying, Davies argues, because he is a Conservative and Conservatives believe in austerity. But as anyone can see, the hallmark of the Johnson administration so far has been massively increased public spending, especially since the pandemic began.

Davies also associates the Brexit vote with a rise in racism and anti-immigrant sentiment in Britain. But evidence from major surveys shows that since the Brexit vote Britons have become more positive about immigration. Someone who cared about more than just point-scoring might have dug a bit deeper. Davies’ approach is pretty much what he accuses others of: the mobilisation of ill-supported assertions to shore up a partisan interpretation of events.

From the outset, Davies’ judgements depend on oddly dogmatic claims. For him, ‘one of the most basic principles of political economy’ is that ‘prosperity is achieved through greater social and spatial interconnectedness’. He argues that Brexiteers ‘shot a hole in a programme that dates the whole way back to Adam Smith in the 18th century’. But Smith’s magnum opus was called The Wealth of Nations for a reason. It was in large part a polemic against mercantilists who abandoned their domestic economies in favour of foreign trade. And yet, like a 1990s globaliser, Davies thinks that ‘the key geographic units are… no longer nation states’. Surely this is a view that needs rethinking in 2021.

Davies does have some dim memory of the importance of national economic strategy to left-wing and Keynesian economics. He admits that ‘protectionism can of course yield economic benefits’, but says this does not apply to Britain because ‘in order [for it] to make any sense at all, there has to be something worth protecting’. ‘What does Britain have?’, he asks incredulously, answering that the only things Brits are any good at are ‘finance and biscuits’. Perhaps Britain is just so rubbish that we might as well give up and dissolve ourselves into the EU, hoping it will look after us.

Throughout the book, Davies underestimates the public’s appetite for Brexit. As recent history now shows, the aspiration to leave was so unbudgeable that it had to be accommodated by the governing party. But because Davies thinks Brexit was all manufactured out of thin air, he struggles to explain how it kept on winning out.

In a piece originally published in 2017, Davies scoffs at the idea that the referendum result ever embodied the ‘will of the people’. He argues that ‘48 per cent of the people voted to remain… while the other 52 per cent held various ideas of what leaving could or should mean in practise’. (Presumably, those who voted to leave did agree on at least one thing, which was leaving the EU.) In an article reproduced from 2019, Davies says that ‘a sufficient number of Leave voters [have] now had enough of Brexit’. Shortly after that piece was published the European Parliament elections gave us a chance to see whether Leave voters really were turning against Brexit. The Brexit Party came top. For Davies, this result was ‘a freakish and frightening situation’ that was ‘unrepresentative of mainstream public opinion’.

Davies also moans that the Conservative Party has been taken over by a ‘fanatical sect’ of Leavers. ‘The fact that a clear majority of the public opposes [Brexit] is, for now, irrelevant’, he says, in a piece first published in 2019. It would have been better, he thinks, if the opposition parties had united and deposed the government in a vote of no confidence and ruled as a coalition in its stead. That this would have been a flagrant reversal of both the 2017 election result and the EU referendum seems not to bother him.

Davies also speculates about whether Brexit can be cancelled altogether. Writing just after the Brexit Party’s success in the European elections, he wonders out loud if a reasonable solution ‘would be to revoke Article 50 and call a General Election’, where the parties could lay out ‘their visions for Britain’s relationship with Europe in their manifestos’. A General Election would have been sensible, but the government was unable to call one without parliamentary support under the Fixed-Term Parliaments Act of 2011. That was the constitutional crisis in a nutshell: the election of 2017 had returned a Remain-leaning parliament while the electorate was leaning the other way. Every electoral test confirmed the public’s support for Brexit, which is why the Conservative Party later chose a leading Leave campaigner as leader.

It was deeply irresponsible of parliament to spend the summer and autumn of 2019 trying to stymie Brexit. Eventually the Labour front bench accepted that the situation could not go on and that there would have to be an election. The result in December 2019 was the election of a government, led by Boris Johnson, committed to getting Brexit done.

You’ll be surprised to find out that the 2019 General Election result was also a total mystery to Davies. Boris Johnson’s campaign, he says, was ‘chaotic and surreal’ and backed by ‘desperate men and women’.

The key refrain in Davies’ book is that the Brexiteers broke established liberal norms. But the reality is pretty much the opposite. The Brexit vote itself was a reassertion of a classic liberal norm – that of representative government – against an anti-democratic and unrepresentative EU.

In This is Not Normal, William Davies goes out of his way to convince us that he does not understand the changes he so deeply resents. It is not a great advertisement for his analysis. His bellows of ‘what the hell is going on here?’ didn’t illuminate much during the Brexit debates. And his follow-up – ‘I still don’t know’ – feels even less insightful.

This is Not Normal: The Collapse of Liberal Britain, by William Davies, is published by Verso. (Order this book here.)