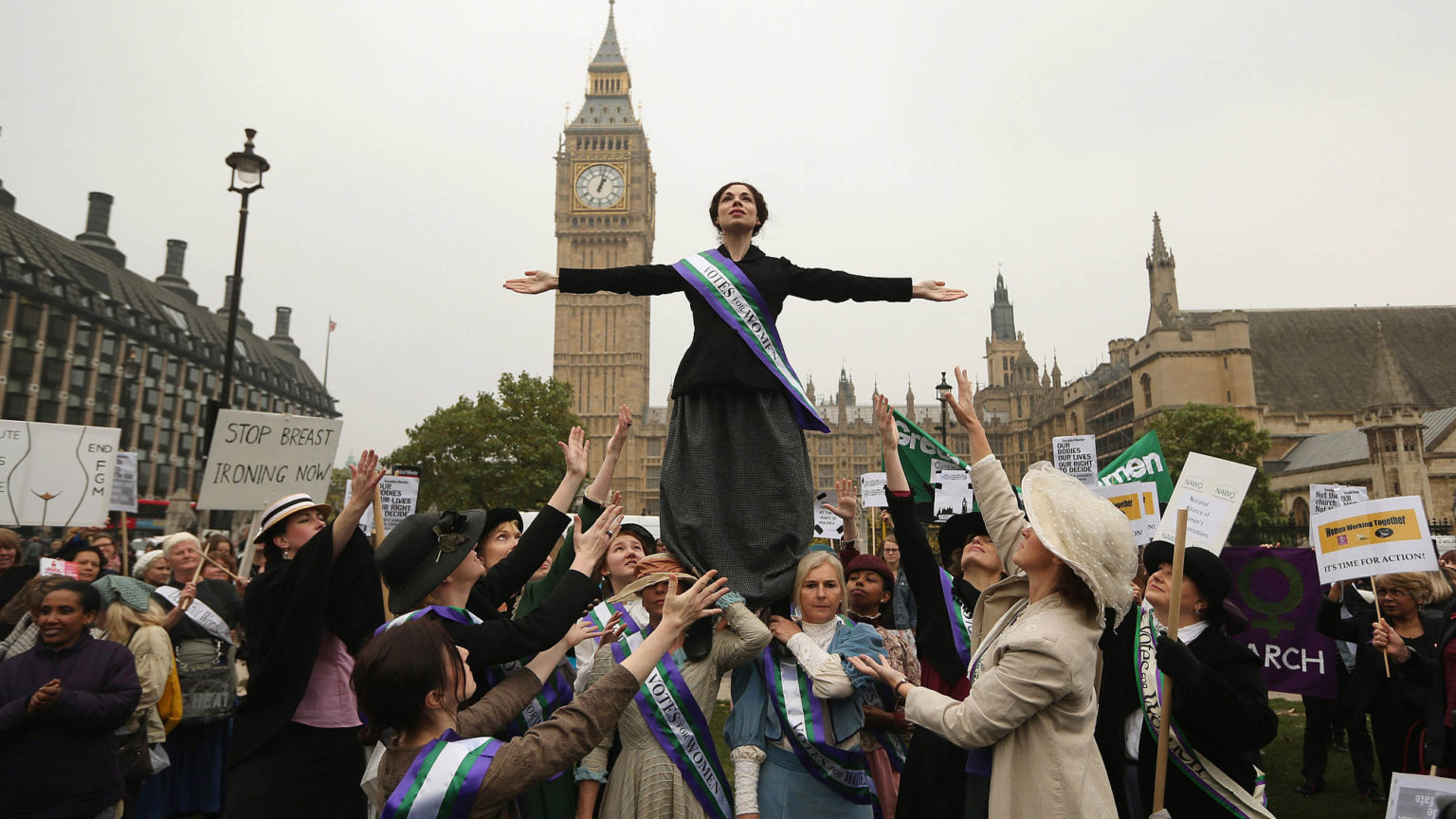 In defence of white women

Why we must resist the woke war on ‘white feminism’.

Raging against white men is so last season. It’s white women the woke loathe now. Remember when the white women who voted for Trump were described as ‘slaves fluffing the pillows of their master’s rocking chair’? A writer for the Guardian has slammed white women’s ‘strategic tears’, which they use to ‘silence women of colour’. Yes, white women are so awful they’ll even blub on cue to keep their black sisters down. ‘Dear white women, are you abusing your racial privilege?’, asked a writer for Forbes earlier this year. The answer, of course, is yes. That’s what these bitches do.

Now into this bitter identitarian fray comes Against White Feminism, Rafia Zakaria’s preposterous diatribe against virtually the entirety of modern feminism. Feminism, she argues, is infected with ‘whiteness’. Always has been. Right from the Suffragettes to Simone de Beauvoir to some of the lesbian firebrands of the 1970s and 80s, ‘whiteness’ has apparently been ‘baked into mainstream feminism’. You thought these warriors for women’s equality had helped to boost women’s rights – and in the process boost the fortunes of humankind – but in truth they were embracing ‘the benefits conferred by white supremacy at the expense of people of colour’. This is the thesis of this cranky book in a nutshell – that under the guise of fighting for women’s equality, feminists have actually helped to maintain the grotesque inequalities of white supremacy.

No feminist hero escapes Zakaria’s attention. The Suffragettes are given short shrift. In a chapter titled ‘In the beginning, there were white women’, Zakaria hopes to show that this movement we idolise for winning the vote actually harboured large numbers of white supremacists in its number. They were beneficiaries of ‘racial privilege’. ‘Privilege’, I must say, is not the first word that comes to mind when I think of women with few rights getting beaten by police officers and force-fed in prison cells simply because they wanted the franchise.

Much of the chapter is just a rebuke of certain Suffragettes for using language that would be considered un-PC today. So Zakaria looks down her nose at Harriet Taylor’s 1851 essay, ‘The Enfranchisement of Women’, because it condemned the ‘servile’ seclusion that ‘Oriental [and] Asiatic’ women are kept in. That reads like an expression of political empathy with the repressed women of the East, not an assertion of racial superiority over them. She condemns an 1879 pamphlet which argued that the ‘legislative disabilities’ suffered by women – ie, their lack of legal and political rights – are bad for their spiritual health. ‘[It is] unfair’, the pamphlet said, ‘to deprive [a woman] of her political liberty and as in the Oriental mode shut her up in four walls’. Again, this sounds less like a rant against ‘Orientals’, and more like an expression of feministic concern both for politically disenfranchised women in the West and for more brutally oppressed women in parts of the East.

Not content with casting aspersions on history’s first feminist movement, Zakaria then turns her unforgiving pen to the instigator of contemporary feminism, Simone de Beauvoir. The author of The Second Sex also engaged in ‘orientalist bigotry’, she tells us. Remarkably, de Beauvoir is condemned for the strong terms in which she objected to the repression of women outside of the West, which she considered, rightly, to be worse than the repression experienced by Western women. ‘The history of woman in the East, in India, in China, has been in effect that of a long and unchanging slavery’, de Beauvoir wrote. This is described as ‘problematic’ by Zakaria, which helps to shine a light on the moral and cultural relativism that underpins this odd book. It sometimes seems that, for Zakaria, any criticism of non-Western cultures and practices, if the criticism is made by a white person, is by definition an expression of white supremacy. But surely it would have been more racist if de Beauvoir had refused to comment on the subjugation of women in the East on the basis that this is just ‘their culture’?

Zakaria’s moral relativism is on full display in later chapters in which she covers modern feminists’ belief that they have a duty to ‘save’ women in other parts of the world. She makes some half-decent arguments here, especially on how the post-9/11 campaign to save and enlighten women in Afghanistan showed how feminism had been co-opted by American imperialism, and on how the policing of female genital mutilation in countries like Sweden has led to the prejudicial monitoring of certain immigrant communities. However, the idea that these modern deployments of feminist arguments to pursue questionable geopolitical aims or forms of social authoritarianism are a direct product of the project of feminism itself – as if there’s a clear line from the Suffragettes to a Sudanese girl being subjected to an invasive genital check-up in Stockholm in 2021 – is so ludicrous you wonder how it got into print.

But even in her sometimes justified swipes at the ‘white saviour complex’ of modern political life, Zakaria skates perilously close to relativising what are in fact genuine problems. So she quotes an anthropologist who asked of Western feminists’ distaste for female genital mutilation, ‘Who defines “mutilation”?’. The anthropologist talked about breast augmentation in Western countries alongside FGM in African countries. Hmm. Also, why don’t we view the trend for slashing one’s arms, as practised by some teenage girls, as symbolic of the barbaric nature of Western culture, in the same way we talk about FGM and African culture, Zakaria asks? Can we agree, please, that a 25-year-old woman voluntarily getting a boob job or a bored 16-year-old lightly cutting her arm is not comparable to a pubescent girl being made to have parts of her clitoris and labia removed? Because if we can’t agree on that, I’m not sure where else we can go.

Zakaria’s caginess about any ‘white’ criticism of non-Western countries and cultures can also be seen in what I thought was the strangest part of her book. In a section on the war on terror, Zakaria discusses Zero Dark Thirty, Kathryn Bigelow’s superb film (in my view, not Zakaria’s) about the hunt for bin Laden. That the lead character in this movie, which is based on a real-life person, is a female CIA operative confirms how ridiculous and racially privileged feminism has become, says Zakaria. If torturing terror suspects and ‘subjugat[ing] Brown men’ is now a feminist act, we’re in trouble. She says she cried when the audience in the Indiana cinema where she watched Bigelow’s movie gave it a standing ovation.

Now, torture might not be feminism, sure (though no one tell Valerie Solanas). And there are many reasons to be deeply concerned about the war on terror, which in my view made the terrorism problem worse and wrecked the lives of countless innocent people in the Middle East and North Africa. But the idea that the CIA operatives specifically tasked with hunting for bin Laden were engaged in the ‘subjugation of Brown men’ is absurd. They were interrogating accomplices to mass murder. In turning such individuals into representatives of ‘Brown men’, it is Zakaria, not Bigelow, who is behaving in a borderline colonialist fashion, through viewing ‘Brown men’ as an indistinguishable whole, as objects of oppression rather than subjects who, in this case, chose to support or assist the worst act of terrorism in human history.

Things get worse. In her rage against the ‘feminist’ war on terror, Zakaria says America’s ‘effort to eradicate terror’ was only ever about ‘Islamic terror, not white nationalist terror’, despite ‘the latter’s considerably larger tally of dead Americans’. Excuse me? She points to the 168 who ‘perished in the Oklahoma City bombing in 1995’. And what about the 2,977 who perished in the 9/11 attacks?

I have made many criticisms of modern feminism, but Zakaria’s depiction of it as a movement that has an ‘aversion to acknowledging lived trauma’ just doesn’t ring true. Indeed, contemporary feminism seems obsessed with trauma – with the alleged difficulty of being a woman in the modern era. There are some important critiques to make of feminism today, and they are being made, by people like spiked’s Joanna Williams, Christina Hoff Sommers and others. But Zakaria’s racialisation of the problem of feminism – so that it all becomes about the sin of whiteness – strikes me as counterproductive and regressive.

The woke set’s declaration of war on ‘white feminism’ poses as hyper-progressive, as wanting to push feminism in a better, more radical direction. But in truth it calls into question the entire history of feminism and the undoubted gains it has made. When the first wave of feminism, which won the vote, and the second wave of feminism, which helped to secure workplace and sexual equality, can be misremembered as expressions of racial privilege, then we know history is being rewritten. Zakaria’s partial, hyperbolic history of feminism is of a piece with the 1619 Project, the turn against historical heroes like Thomas Jefferson and Abraham Lincoln, and the depiction of Martin Luther King’s ‘character not colour’ worldview as somehow problematic – that is, it’s an assault on the progressive leaps forward made by earlier generations. It’s a reactionary view of the past masquerading as a radical text.

It is true that feminism has at times allowed itself to be marshalled to some dubious causes, including the moral rehabilitation of foreign interventionism and of capitalism itself. But Zakaria and other warriors against the ‘whiteness’ of progressive movements cannot see that they themselves are far more closely aligned with the current needs of neoliberalism than the old counterculture ever was. Their pushing of a divisive, racialised agenda is music to the ears of the capitalist elites who are always on the lookout for new ways in which to divide, rule and control the workforce and to hold at bay pesky movements for meaningful change, which feminism no doubt once was. Zakaria imagines she is a thorn in the side of the feminist capitalist complex; in truth she’s yet another sidekick of neoliberalism and its close cousin, racialised wokeness.

Against White Feminism, by Rafia Zakaria, is published by Hamish Hamilton. (Order this book here.)