Few challenge the new intolerance as effectively and naturally as Mr Chappelle. 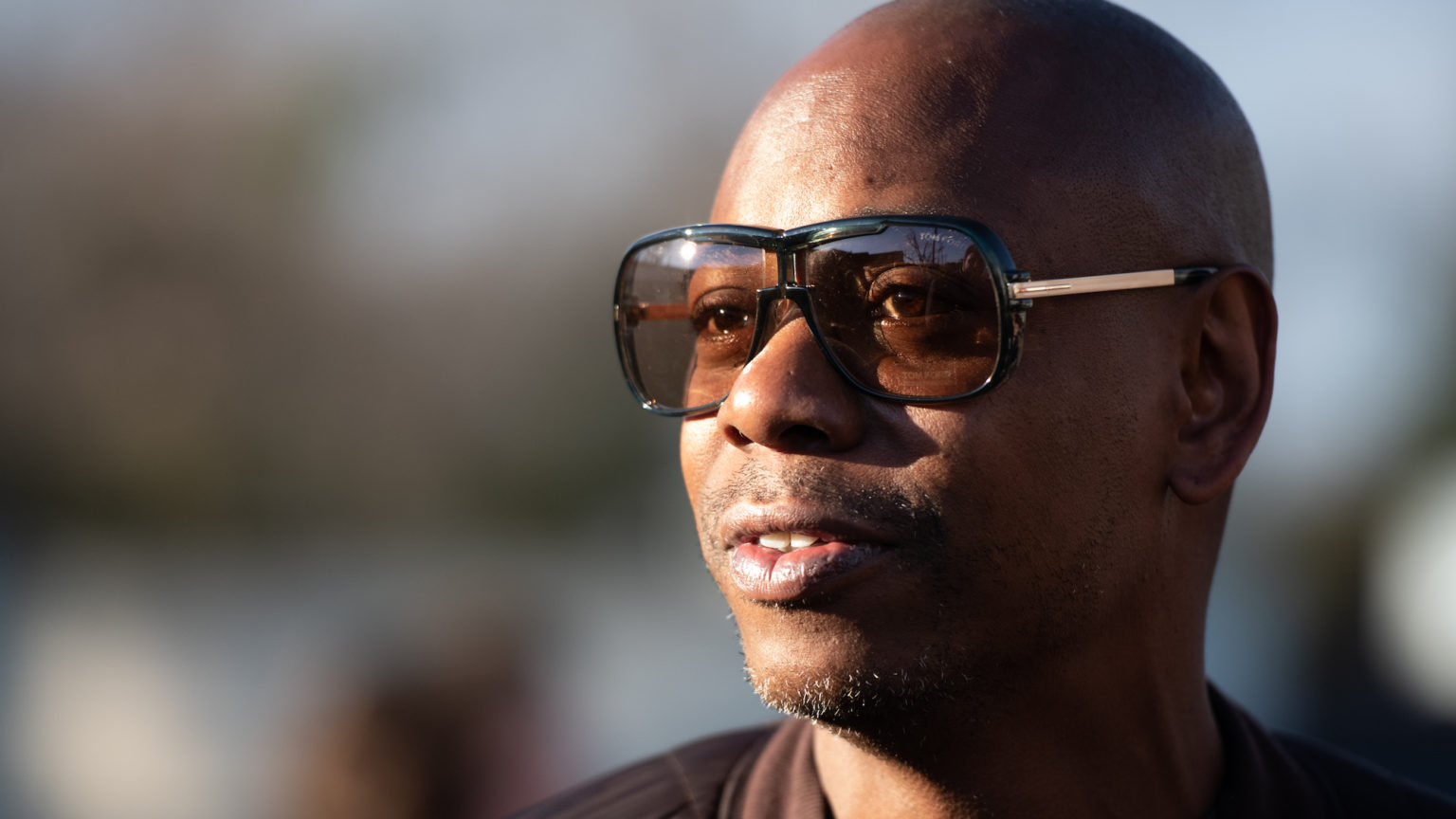 There is something a tad disquieting about Dave Chappelle’s demeanour in his new Netflix stand-up special, The Closer, filmed in Detroit. For a while, as I watched him joke about coronavirus, racism and the trans question, I couldn’t put my finger on it. Then it struck me. It was his lack of nerves that felt unnerving. Here was a man making gags about some of the most vexed topics of our time, even going so far as to joke about trans women’s ‘vaginas’ (‘I’m not saying it’s not pussy, but it’s Beyond Pussy or Impossible Pussy’). And yet he displayed neither the darting-eye angst that so often accompanies the saying of unsayable things, nor the smug self-satisfaction of those who blaspheme against woke orthodoxies for the thrill of it. No, this was a man calmly, funnily saying what he believes to be true, as if he were compelled to do so, as if he could do no other. And that, in this era in which people either sheepishly duck controversy or hug the hell out of it for the retweets, feels unusual, and bracing.

Chappelle’s comedy has an increasingly Lutheran vibe. ‘Here I stand; I can do no other.’ He mocks the fact that Caitlyn Jenner was given a Woman of the Year award – ‘Her first year as a woman… Never even had a period. Ain’t that something?’ – not to stoke a Twitter fire or to upset the Jenners, but because he truly is amazed that a biological male ‘beat every bitch in Detroit, she’s better than all of you’. He rails against cancel culture not because he wants your sympathy or because he’s worried about losing his platforms – here he is on Netflix, after all, his sixth special for the streaming giant – but because he has to. It’s the truth as he understands it forcing its way from his soul into his routine. On rapper DaBaby, who survived the controversy of shooting a black man in 2018 but was ‘cancelled’ for making homophobic comments in 2021, Chappelle said: ‘In our country, you can shoot and kill a nigga, but you better not hurt a gay person’s feelings.’

That line contains more insight into the moral perversions of cancel culture than anything I’ve read in a thousand thinkpieces. It nails the hierarchical politics of identitarianism, in which the emotions of very-online upper middle-class ‘queers’ count for more than the literal life of a young black man shot in a Walmart. It captures the madness of elevating pricked feelings above all else, where the cult of self-esteem leads to a situation in which being wounded by words is considered a graver sufferance than being wounded by weapons. And it speaks to Chappelle’s implacable anger that for all their anti-racist posturing, the white, liberal virtue warriors of the 21st century still take a cavalier view of black life. It brought to mind a bit from one of his earlier Netflix specials, Sticks and Stones, in which he recounts the time a right-on network boss told him he couldn’t say the word ‘faggot’ anymore. How come I can say the word ‘nigger’ but not the word ‘faggot’, Chappelle asked? ‘Because you’re not gay’, came the reply. ‘Well, I’m not a nigger, either’, Chappelle said.

It is the unforced, honest nature of Chappelle’s comedic war on cancel culture that makes it so stirring. This isn’t to say, of course, that Chappelle’s job is to enlighten us, to provide political guidance to lost liberals who cannot fathom what has happened to free speech and reason in this suffocating young millennium. Chappelle’s a funnyman. His job is to make us laugh. Period. And thankfully, he did that a lot in The Closer, whatever the Guardian’s angry, ungenerous review might say to the contrary (Chappelle ‘triples down on the phobia’, said the Grauniad’s reviewer). If Chappelle made worthy speeches about the things that peev him, it would be terrible. But no, he drives the knife of comedy in instead. ‘Careful, they after you’, a friend said to him regarding his gags about trans people. ‘One they or many theys?’, Chappelle replied.

And yet the truthfulness, the compulsion, of Chappelle’s utterance of thoughts and beliefs and jokes that have madly been turned into speechcrimes is unquestionably inspiring. Chappelle, in being Chappelle, shows us how to confront cancel culture. Not by acquiescing to it, of course. That always feeds the beast. The cancelling mob gets fat on apologies. Every public figure’s pleading for forgiveness is blood in the nostrils of the new censors. And not by opposing it just because that’s what your side in the culture war does. Indeed, in his recent podcast chat with Joe Rogan – even rubbing shoulders with Rogan confirms that Chappelle gives very few shits about the cordon sanitaire self-righteous cancellers have erected around certain people and ideas – Chappelle said he understands ‘the ideas behind some of these cancellations’. Cancellers kind of want to make the world a better place, he and Rogan agreed. The problem is that in the process of smashing that which offends them, they undermine the creative process necessary for an art like comedy and deny us the right to hear alternative ideas. Chappelle’s mix of sympathy for and opposition to the cancelling instinct makes him as far from a shit-stirring, ‘feminism is cancer’ grifter as it is possible to get.

Rather, it is Chappelle’s refusal to censor himself, his preference for saying what he believes to be true rather than what the cultural elites insist is true, that makes him stand out. In The Closer, this was most clear on the trans issue. As any ‘gender critical’ woman will tell you, criticising, or even just questioning, the ideology of transgenderism is to the 21st century what denying the truth of the Bible was to the 15th century. You’ll be hounded, harassed, deprived of your platforms, possibly sacked. Yet Chappelle – possibly from the luxurious position of being a largely uncancellable comedy giant – waded in. He had to.

He talked about the cancellation of JK Rowling – an author who ‘sold so many books, the Bible worries about her’ – simply for believing that sex is real. The trans community got ‘mad as shit’, he said: ‘They started calling her a TERF. I didn’t even know what the fuck that was. But I know that trans people make up words to win arguments.’ He looked up TERF, discovered what it means – trans-exclusionary radical feminist – and then decided he is ‘Team TERF’. TERFs, he said, are a group of women who ‘look at trans women the way we blacks might look at blackface. It offends them, like eww this bitch is doing an impression of me.’ It is a testament to the shrunken nature of public discussion today that it felt genuinely shocking, and elating, to hear someone express a truth as profound as that one.

He actually said that – that he’s Team TERF. This was a declaration of heresy, and one the world needed to hear. He didn’t say anything ‘transphobic’. He didn’t insult any trans individuals. He was nice about ‘decent’ Caitlyn Jenner, even as he ridiculed the crowning of Jenner as Woman of the Year. No, Chappelle was simply puncturing the pompous, arrogant worldview of a new elite that thinks it can tell us not only what to say but also what to believe. Chappelle laid a funny flag in the earth on behalf of truth. There was something almost moving about his insistence that sex is a fact. ‘Every human being in this room, every human being on Earth, had to pass through the legs of a woman to be on Earth. That. Is. A. Fact.’ The audience applauded. They were applauding reality. They were applauding that most controversial word: woman. Chappelle’s genius is to give people permission to cheer truth at a time when you can be persecuted and punished just for thinking it.

No one, least of all Chappelle, will have been surprised by the response to The Closer. It confirmed everything Chappelle said. ‘So-called comedian Dave Chappelle says he’s “Team TERF”’, said the so-called journalists at Pink News. ‘Dave Chappelle slammed for defending JK Rowling’, reported the Los Angeles Times. Yes, you can now be ‘slammed’ for standing up for one of the world’s most popular authors who just happens to believe that if you have a penis you are a man and should stay out of women-only spaces. ‘Netflix urged to pull down Dave Chappelle’s new show after accusations of “anti-LGBTQ diatribes”’, said Sky News. The cancel-culture mob’s view can be summed up as follows: ‘Chappelle is making it up, cancel culture isn’t actually a thing. Now can we please make sure this vile heretic is never given the oxygen of publicity again?’

The response was perfect. It was like an extension of the special itself: Chappelle made the case that we live in strange, intolerant times, and then the mob came along to prove him right. They were the encore to his gags. But here’s the good news: Chappelle won’t be cancelled. He can’t be. He is that rarest of creatures – a public figure who has successfully immunised himself against the disease of woke intolerance. And he has achieved this partly by being well-loved and well-known, yes, but mainly by refusing to sacrifice what he knows to be true at the altar of 21st-century orthodoxy. He refuses to lie. That’s it. Even if it would endear him to a new generation, win him accolades from the new political class, and maybe make more secure the platforms from which he plies his trade, he still refuses to do it. He values the truth and just being funny more highly than the shrivelled respect you win when you succumb to the diktats of the clerisy. And that makes him a cultural hero, whether he likes it or not.