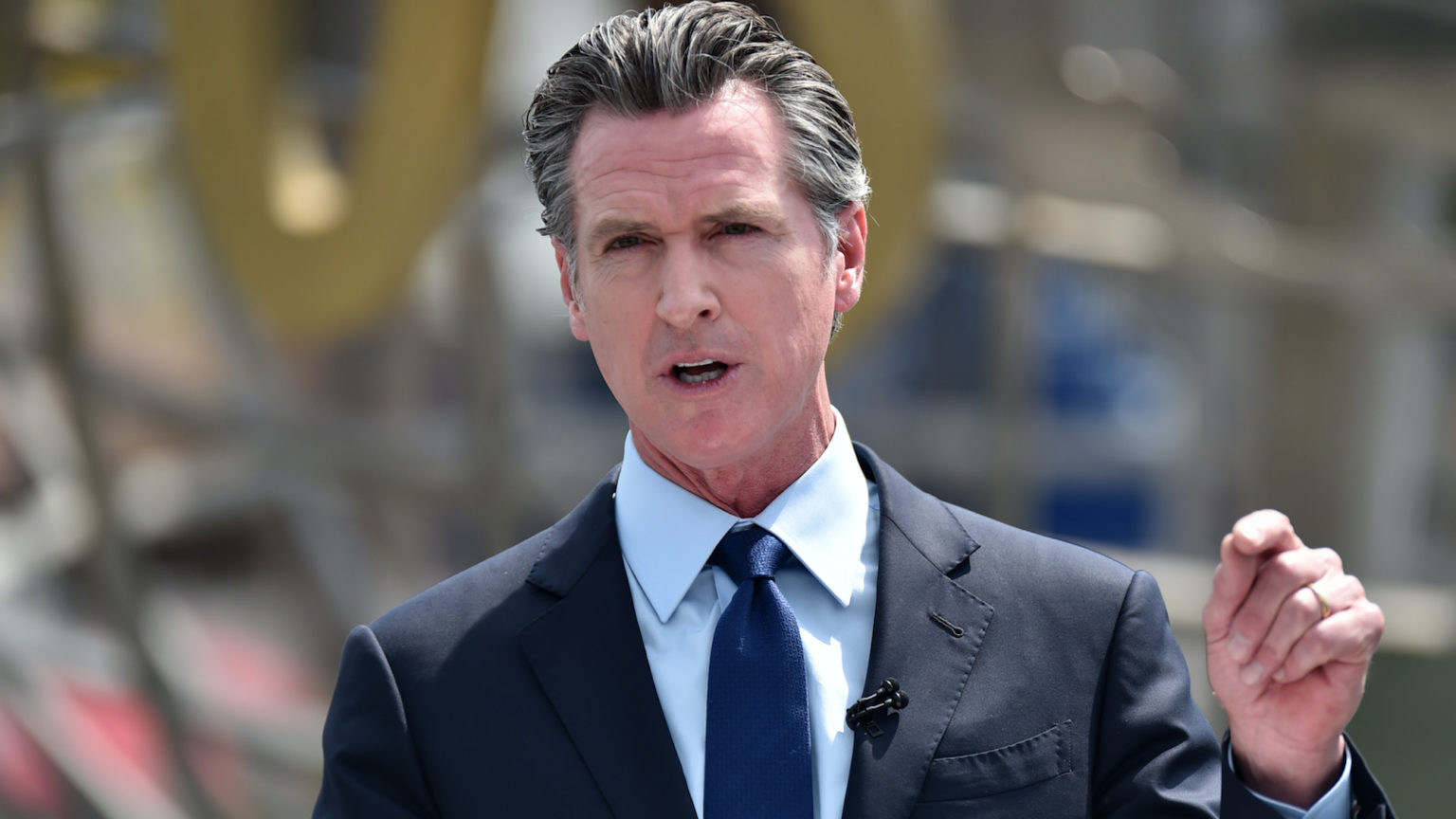 The very idea of a recall vote seemed absurd at first in California, this bluest of US states. Yet Californians’ surprisingly strong support for the removal of Democratic governor Gavin Newsom has resulted in precisely that, with the vote scheduled for 14 September. This reflects a stunning rejection of modern progressivism in a state thought to epitomise its promise.

Some, like the University of California’s Laura Tyson and former Newsom adviser Lenny Mendonca, may see California as creating ‘the way forward’ for a more enlightened ‘market capitalism’, but that reality is hard to see on the ground. Even before the pandemic, California already had the highest poverty rate and the widest gap between middle and upper-middle income earners of any state in the US. It now suffers from the second-highest unemployment rate in the US after Nevada.

Today, class drives Californian politics, and Newsom is peculiarly ill-suited to deal with it. He is financed by what the Los Angeles Times describes as ‘a coterie of San Francisco’s wealthiest families’. Newsom’s backers have aided his business ventures and helped him live in luxury – first in his native Marin, where he just sold his estate for over $6million, and now in Sacramento.

California’s well-connected rich are predictably rallying to Newsom’s side. At least 19 billionaires, mainly from the tech sector, have contributed to his extraordinarily well-funded recall campaign, which is outspending the opposition by roughly nine to one.

There is little hiding the elitism that Newsom epitomises. In the midst of a severe lockdown, he was caught violating his own pandemic orders at the ultra-expensive, ultra-chic French Laundry restaurant in Napa.

Newsom insists California is ‘doing pretty damn well’, citing record profits in Silicon Valley from both the major tech firms and a host of IPOs. He seems to be unaware that California’s middle- and working-class incomes have been heading downwards for a decade, while only the top five per cent of taxpayers have done well. As one progressive Democratic activist put it in Salon, the recall reflects a rebellion against ‘corporate-friendly elitism and tone-deaf egotism at the top of the California Democratic Party’.

Much of this can be traced back to regulatory policies tied to climate change (along with high taxes). These policies have driven out major companies – in energy, home construction, manufacturing and civil engineering – that traditionally employed middle-skilled workers. Instead, job growth has been concentrated in generally low-pay sectors, like hospitality. Over the past decade, 80 per cent of Californian jobs, notes one academic, have paid under the median wage. Half of these paid less than $40,000.

The argument for progressive government has been further undermined by extraordinarily poor governance. In 1971, John Kenneth Galbraith described California’s state government as run by ‘a proud, competent civil service’, enjoying among ‘the best school systems in the country’. Half a century later, few would say that about a state that has so grossly mishandled unemployment claims. It dished out $11.4 billion in fraudulent benefits claims during the pandemic, while failing to pay or freezing the claims of over a million eligible Californians.

Other government disasters can be traced back to efforts to present California as the global policymaking model for reversing climate change. Newsom predictably blamed the recent fires on climate change and pledged to switch to all-electric power over the next decade and eliminate gas-powered cars by 2035.

Yet, as Pro Publica notes, the fires were made far worse by green policies, including constant lawsuits against local efforts to clean up dead vegetation. In fact, thanks to these largely preventable fires, California’s carbon emissions are now increasing.

Much the same can be said about the recent drought. Under Pat Brown, who served as governor during the 1960s, California constructed an enormous system of aqueducts and reservoirs. But, in recent years, the state stopped building new storage, and began siphoning water supplies into the river system, even in years of severe drought. Once California could withstand several dry years – now just one jeopardises the entire system, and threatens the state’s agriculture industry.

Perhaps most tragic of all has been the decline of California’s once-vaunted education system. The state’s public schools were largely closed during the pandemic, although they did find time to add a course called ‘ethnic studies’ to the curriculum. This course promises to ‘build new possibilities for post-imperial life that promote collective narratives of transformative resistance’. But it won’t do much for the almost three-out-of-five California high schoolers who graduate unprepared for either college or a career. In terms of educating poor students, California ranks 49th out of America’s 50 states in education-performance tables. Indeed, San Francisco, the epicentre of California’s woke culture, has the worst test scores for African-Americans of any county in the state.

Newsom’s backers from the media, business and the powerful public unions see the recall as a ‘nightmare’ for the progressive agenda. The Nation even calls the recall ‘a national disaster’. Yet despite the media spin, ordinary Californians are plainly uneasy with the state’s direction, particularly as crime rates rise.

Perhaps the best illustration of discontent has been the massive domestic outmigration. Since 2000, the state has lost nearly 2.7million net domestic migrants, a population larger than that of the cities of San Francisco, San Diego and Anaheim combined. Even before the pandemic, according to the Edelman survey, roughly half of Californians were considering an exit.

Some conservatives see the recall as the leading edge of their battle with progressives. There are certainly signs of rightward movement. Last year voters defeated new tax proposals – which were heartily endorsed by Newsom’s public-union and tech-industry allies – and an affirmative-action measure. Republicans even picked up four Congressional seats.

Future Republican gains rest largely on the change in attitude of Latino voters. Gustavo Arellano, a reliably progressive columnist at the LA Times, suggests that Latinos’ long-standing antipathy to the GOP is now shifting towards the progressive gentry. Hence recent polling shows that roughly half of Latinos have embraced the recall, despite voting overwhelmingly for Newsom back in 2018.

Yet the GOP faces a far more difficult path to power than it did with the recall of Democratic governor Gray Davis in 2003. The then GOP contender was Arnold Schwarzenegger, a movie star with wide appeal. Today Newsom’s potential replacements fall into one of two categories. First there are the entertaining outsiders, like YouTube personality Kevin Paffrath, transgender icon Caitlyn Jenner and talk-show host and current poll leader Larry Elder – a brilliant raconteur with controversial libertarian views and perhaps some personal baggage. Then there are the nondescript candidates, like businessman John Cox, a wealthy investor from Illinois whom Newsom trounced by 23 points in 2018. Only former San Diego mayor Kevin Faulconer looks a natural fit for the governor’s chair.

In addition, the percentage of voters who register as Republican in California has declined from 35 per cent in 2000 to 24 per cent in 2020. The percentage of registered Democrats has stayed at roughly 45 per cent during the same period. So, while conservatives may be more motivated to vote, a successful mobilisation of less enthusiastic Democrats could still win it for Newsom. As left-wing warhorse Harold Meyerson suggests, Newsom must ‘scare’ Democrats to the polls by stoking fears about a resurgent Trump, climate and the pandemic. Giving out $600 or more extra in Covid stimulus payments to voters around the time of the election might also work.

Yet even if the recall fails to oust Newsom, a close vote would suggest trouble ahead for progressives, not only in California but also across the US. There is a growing gap between the Democrats, backed by Wall Street and Silicon Valley, and vast swathes of their own historic base. A close call or a recall victory would send a stinging rebuke to the Democratic elites. They now face the prospect of losing constituencies that they long saw as essential to maintaining power.