Exploding the myth of Michel Foucault

The hero of the academic left was a petit-bourgeois thinker with a taste for neoliberalism. 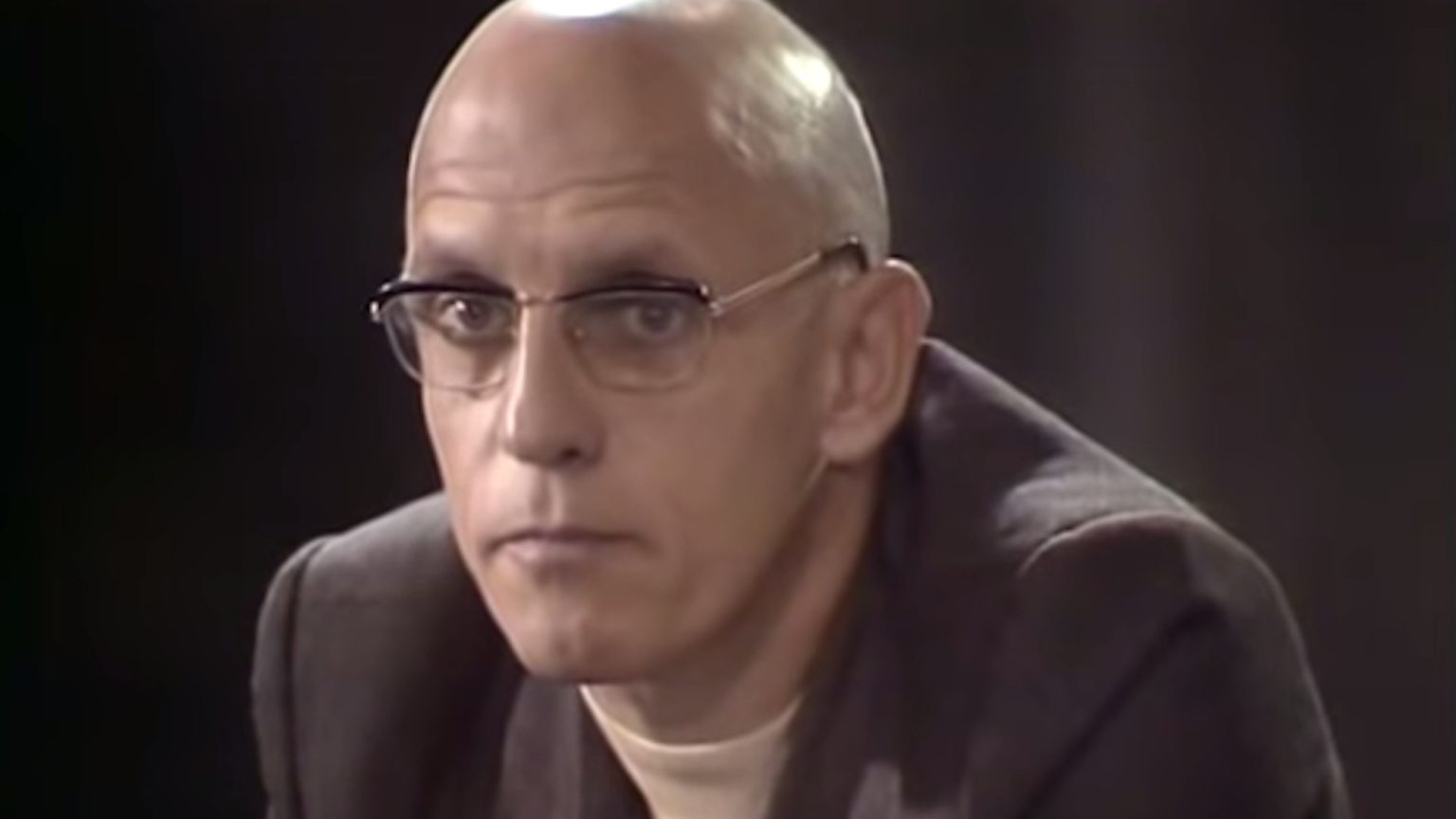 At the end of 2020, UK equalities minister Liz Truss was ridiculed for denouncing Michel Foucault as a pioneer of the ‘postmodernist philosophy’ that underpins contemporary identity politics. The claim was ‘bonkers’, said rival politicians. It was such a ‘bizarre rant’ that the published speech had to be redacted to remove it, sniggered liberal journalists.

Yet, just six months later, the Guardian carried an op-ed telling us that we should ‘blame Michel Foucault’ for the rise of today’s narcissistic ‘confessional politics’.

The authors of the Guardian piece, academics Mitchell Dean and Daniel Zamora, argue that the logical outcome of the ‘new politics of the self’, announced by Foucault in the late 1970s, can now be seen in ‘the confessional tone of many forms of contemporary anti-racism’, as promoted by Robin DiAngelo or Ibram X Kendi. Although inward-focused, this self-absorbed style of personal-as-political engagement is performed in public, requiring ‘loud rituals announcing our inner battles’. It is reflected, they suggest, in sports teams, politicians and other public figures taking the knee, or in celebrity anti-racism pledges on social media. It is also ‘echoed and reinforced’, they note, by ‘corporations and self-help industries that march ever deeper into our psyches’ – for example, through ‘training their staff to “be less white” and “work through feelings of guilt, shame, and defensiveness”’.

If it is a surprise to find such anti-woke views in the Guardian. It is perhaps even more surprising that Foucault keeps getting dragged into it. Can it really be the case that a thinker who died in 1984 is to ‘blame’, as Dean and Zamora (or a Guardian headline-writer) claim, for contemporary identity politics? The short answer is ‘no’, but the longer answer is a bit more complicated. Dean and Zamora’s new book, The Last Man Takes LSD: Foucault and the End of Revolution, offers a fuller, more nuanced and fascinating account.

The Last Man joins a long-running academic discussion about Foucault’s relationship to neoliberal economic thought. The debate was kicked off in a 2009 paper by Michael Behrent, who argued that, in the series of lectures on neoliberalism Foucault delivered at the Collège de France in 1979, he ‘did not critique neoliberalism’, but rather ‘endorsed it’. Behrent hedged this bold claim by emphasising that the endorsement had been ‘brief, strategic, and contingent’, but it was sensational nonetheless.

As Behrent observed, Foucault’s positive interest in neoliberalism had been missed because of ‘the unwillingness of many of his readers to hear what he is saying’. It was simply unthinkable for them that a figure ‘whom academic radicals have lionised… might have taken seriously a school of thought embraced by Ronald Reagan, Margaret Thatcher and Alan Greenspan’.

In 2012, added credibility came from François Ewald, a former student of Foucault’s who also worked as his personal assistant and edited much of his posthumously published work. Speaking at the University of Chicago alongside Gary Becker, one of the neoliberal economists discussed in Foucault’s lectures, Ewald summed up his former mentor’s views as an ‘apology’ for neoliberalism. Ewald meant this approvingly – though he was a Maoist radical in the 1960s, in the 2000s Ewald championed the French employers’ association, MEDEF, and its proposals to reform the welfare state. Becker, for his part, affirmed that he ‘didn’t have much to disagree with’ in Foucault’s lectures.

A decade on, and many academic articles, conferences and books later, the reappraisal of Foucault by specialist scholars may have occasionally reached the mainstream – with commentaries in the Washington Post and the New York Times, for instance. But Foucault’s reputation as the ne plus ultra of critical theorists still persists in the minds of many leftish academics, never mind Conservative politicians.

Dean and Zamora have already contributed extensively to the debate about whether this reputation is deserved, but The Last Man adds something new and interesting. Much of it is devoted to restoring Foucault’s lectures on neoliberalism to their original 1970s context – as opposed to that of their English-language publication in 2008 – to explain why he was attracted to neoliberal thought. They then use this as the basis for a critique of the contemporary political landscape. The first of these undertakings, it has to be said, is more successful than the second.

Though briefly joining the French Communist Party (PCF) in the 1950s (at the prompting of his tutor, Louis Althusser), by the 1970s Foucault was explicitly and implacably anti-Marxist. He was aligned instead with the ‘anti-totalitarian’ politics of the so-called Second Left, engaging with ‘new philosophers’ such as Bernard-Henri Lévy and André Glucksmann, and participating in the human-rights campaigns of Bernard Kouchner. This was a milieu, Dean and Zamora emphasise, that was ‘thinking about a left that was not socialist, a left that would wipe out the legacy of postwar socialism’. In Foucault’s search for an alternative mode of ‘left governmentality’, neoliberal thought seemed like it might offer possibilities.

Of course, there were excellent reasons to reject both the repressive Soviet system and the conservative, paternalistic politics of the PCF and other state socialists. But such a rejection could have led in many different directions. Yet as Dean and Zamora remark, Foucault ‘seemed to suggest a version of Thatcher’s TINA (“There Is No Alternative”) principle’, seeing a stark choice between the ‘heavy hand of totalitarianism’ or the ‘light techniques of liberalism’. It perhaps appeared that way because, beyond the contingencies of 1970s French politics, there were deeper affinities between Foucault’s thought and that of neoliberal economists.

In making this argument, Dean and Zamora identify a change of direction in Foucault’s thinking after an elaborately staged experiment with LSD during a trip to California in 1975. The experience had a ‘profound’ effect on Foucault, leading him to ‘alter radically’ his plans for future writing. Specifically, there was a shift in his view of the human subject.

Indeed, Foucault is perhaps best known for his idea that there is no pre-existing subjectivity that is then repressed or deformed by disciplinary institutions like the school, the hospital or the prison. Rather, he contended, such institutions, and the forms of power / knowledge they wield, create our very sense of ourselves as subjects. As he put it in Discipline and Punish, ‘it is not that the beautiful totality of the individual is amputated, repressed, altered by our social order, it is rather that the individual is carefully fabricated in it’.

But after his ‘California experiences’ – not just the acid trip but his broader ‘exposure to the “Californian cult of the self”’ – Dean and Zamora argue that ‘Foucault’s subject becomes a free one, an active agent capable of making itself through spiritual and physical exercises… with the potential for radical self-transformation through extreme experiences’.

This interest in the ‘political possibilities of radical self-creation and self-invention’ led Foucault himself to try out a variety of ‘spiritual and physical exercises’, from Zen temples to S&M dungeons. And it is that which seems to lead him ultimately to the lifestyle politics of ‘woke neoliberalism’, as critiqued in Dean and Zamora’s Guardian article.

The ‘confessional’, therapeutic quality of contemporary identitarianism, though, would have been anathema to Foucault. As Dean and Zamora draw out in The Last Man, the attraction of extreme épreuves – tests, or trials, of the self – was that they offered an alternative form of knowledge and truth-seeking to that of the enquête, or investigation. Foucault took from neoliberalism the idea that the effectiveness and validity of governance could be sought not through rational enquiry and analysis (which would produce conformist modes of subjectivity). Rather, it had to be sought through the épreuve of the market, as an alternative ‘site of veridiction’ (and through which, Foucault hoped, we would ‘not be governed too much’). If we were ‘subjectified’ by the bureaucratic institutions of a welfare state that interrogated us, classified us and shaped our innermost sense of ourselves, then perhaps, the logic went, the more arm’s-length techniques of neoliberal governance would allow greater space for the exercise of freedom.

As things transpired, the entrepreneurial, self-inventing subject that Foucault envisaged turned out to be a vulnerable, narcissistic subject, enmeshed in a new regime of therapeutic governance. Dean and Zamora offer a sharp critique of actually existing ‘left governmentality’, as manifest since the Blair-Clinton years. They note its ‘abandonment of the traditional core constituencies of labour and social democracy’, and its neglect of formerly key questions of inequality and exploitation.

But Dean and Zamora’s argument becomes less persuasive the closer it draws to the present. As they see it, anti-statism was the big mistake. As Foucault’s development showed, anti-statism opened the door to a ‘rogue neoliberalism’ that is now all-pervasive. Politics has become a matter of privatised ‘consumer choice rather than thoughtfulness and careful deliberation’, whereby voters reactively ‘declaim (give a “thumbs down” to) the system itself, as in Brexit, or acclaim (give a “thumbs up” to) those politicians who are the most entertaining (“BoJo”, “the Donald”)’. With the masses under the spell of ‘charismatic, strong leaders capable of eliciting popular acclamations and identifications’, we see the ‘recharging of nationalist and sovereigntist politics and powers’. In a word, populism.

Rather than just swinging the pendulum back towards welfare-statism, we might do better to ask why ‘sovereigntist’ politics is seen as such a problem. On this point Dean and Zamora remain rather too close to Foucault, who took an anti-sovereigntist attitude to pretty much everything. In matters of literary criticism, he sought to de-throne the author as sovereign authority over the meaning of a text. And in politics, he rejected the ‘entire conceptual structure of revolution’ because it merely meant replacing one sovereign authority with another. In literature, his aim was not to establish a new source of textual authority but to open up a space of experimentation for multiple readings. Likewise, in politics, his goal was not to claim sovereign power (which, for Foucault and his circle, would only lead to totalitarianism) but to encourage the marginal resistance of everyday micro-politics. Foucault’s anti-sovereigntist vision is indeed perfectly compatible with neoliberal thought, which, as Quinn Slobodian outlines in his 2018 book, Globalists, seeks to insulate the rule of capital from the democratic politics of sovereign states.

What Foucault offered was essentially a petit-bourgeois form of rebellion, a self-regarding middle-class radicalism that would allow its adherents to distinguish themselves from the ‘normalised’ subjects produced by the institutions. Today, many of those same institutions now encourage just the sort of ‘politics of the self’ that Foucault saw as transgressive and liberating. Dean and Zamora’s critique of that development is well made, but our contemporary situation demands something more – that we take our fellow citizens’ aspirations to exercise political sovereignty seriously for a change.

The Last Man Takes LSD: Foucault and the End of Revolution, by Mitchell Dean and Daniel Zamora, is published by Verso. (Order this book from Amazon(UK).)