Why American Jews are looking to Israel

Anti-Semitism is on the rise on the American right and left. 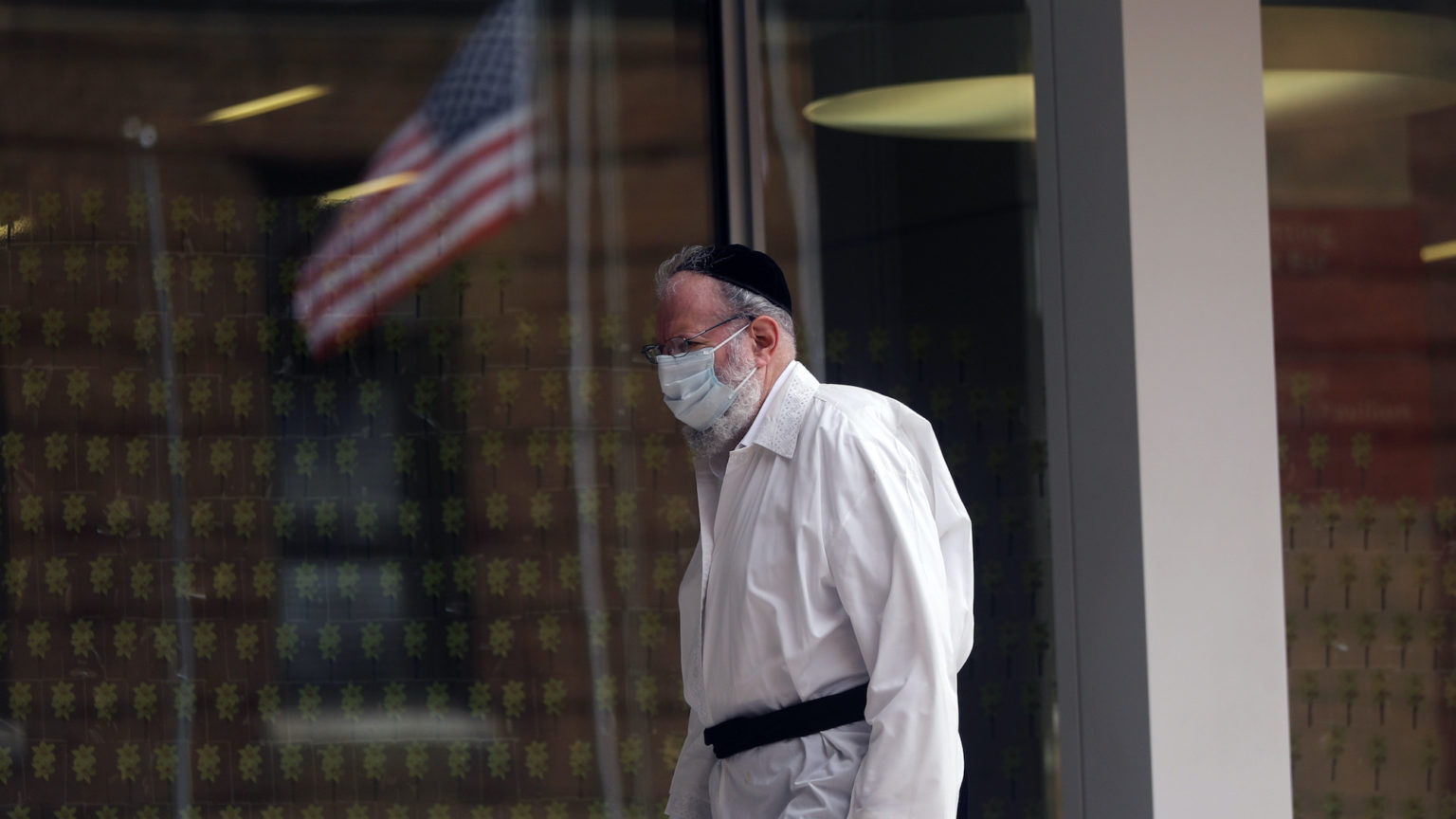 For much of the past century, America has dominated the Jewish world. It has been a semi-sacred ‘safe place’, where anti-Semitism only rarely impinged on the national political culture. Yet today, American Jews face levels of anti-Semitism not seen since the 1930s, with half saying they have observed anti-Semitic incidents over the past year.

This includes the attacks on synagogues during last summer’s riots, the random assaults on the streets of LA and New York, and the spate of violent and unprovoked attacks on Jews during the recent flare-up of the Israel-Palestine conflict.

No longer confident in their tolerant paradise, America’s Jews face a reality similar to that of the shrinking, increasingly marginalised European Jewish community. Remember that, in 1920, Europe was home to over half of world Jewry, including some of its wealthiest and most accomplished communities. Today it contains barely 10 per cent of the world’s Jews. In 1939, there were 9.5million Jews living in Europe; at the war’s end in 1945 only 3.8million remained. Today, more than half a century after the Holocaust, barely 1.5million are left in Europe.

This decline has many roots, including intermarriage, which impacts roughly half of all European and American Jews. But rising anti-Semitism is clearly a factor. Around 90 per cent of European Jews in 2019 reported witnessing anti-Semitic incidents. Some of this anti-Semitism comes from traditional nationalist, far-right sources, notably in Eastern Europe, but it also comes from other sources in Western European political and social life.

For instance, Alexander Gauland, one of the leaders of Germany’s right-wing Alternative for Germany party, was accused of trivialising the Holocaust when he dismissed the crimes of Hitler and the Nazis as ‘a speck of birdshit in 1,000 years of glorious German history’. Though Gauland’s rhetoric is shocking, more alarming still is the fact it resonates with a large segment of the German public. According to a 2015 Anti-Defamation League survey, just over half of Germans now believe that Jews overplay the Holocaust, while a third blame Jews themselves for rising anti-Semitism. Another study reports that 60 per cent of German anti-Semitic messages come from well-educated people. And recent research concludes that today barely half of Europeans think Israel has a right to exist.

So although anti-Semitic views are still present on the extreme right, they are now also widely embraced by the more mainstream left. Green parties, likely the future of Europe’s left, tend to support the Boycott, Divestment and Sanctions (BDS) movement, which aims to demonise and eliminate the Jewish state. And the German Greens regularly label Israel an ‘apartheid’ regime. A poll of European Jews has found that the majority of anti-Semitic incidents now emanate from either Muslims or from the left – barely 13 per cent of incidents were attributed to right-wingers.

Things are not yet as awful for America’s roughly six million Jews, but the European experience increasingly resonates. The American Jewish population, unlike that of demographically robust Israel, is unlikely to grow before 2050, with a marked decline in Reform and Conservative synagogues. The median age of the largest group, Reform Jews, stands at 54. Four fifths of the movement’s youth drop out of Jewish institutions by the time of their high-school graduation. Over the past 20 years, the numbers of Reform and Conservative congregants have declined by an average of 26 per cent, while only the Orthodox Chabad movement has grown, tripling in size.

This demographically stagnant community now also faces assaults from right and left. On the right, there are nativists and white nationalists, some inspired by Donald Trump, whose sometimes intemperate remarks gave cover to their racist views. It is notable that individual white nationalists have carried out lethal attacks on synagogues, including outside San Diego and in Pittsburgh.

But, overall, the far right is largely marginalised and possesses little political power. Its leading light in Congress, Marjorie Taylor Greene, who embraced insane QAnon theories about Jewish global manipulation, has been unceremoniously stripped of her committee assignments in a move backed even by some in her own party (although not nearly the majority).

Increasingly, the most hostile environments for Jews today can be found at major universities, which have incubated the BDS movement, welcomed anti-Semitic speakers and allowed Jewish students and employees to be harassed for their support of Israel. In Congress, it’s almost entirely progressive legislators who embrace calls to limit arms shipments to the always beleaguered Jewish state. Like its European counterparts, the ascendant left faction of the Democrats assigns exclusive blame to Israel for its response to the mass-missile attacks on its cities from groups like Hamas, whose genocidal ambition, enshrined in the group’s founding documents, is to expel the Jews ‘from the river to the sea’.

Some, like Democratic Congresswoman Ilhan Omar, have waded ever closer to open anti-Semitism, suggesting that Jewish money exerts too much influence over US policymaking. Omar can say such things without getting slapped down because the Democrats fear offending the radical mobs now gaining influence at the edge of their party. That supposedly staunch defender of Jewish rights, the Anti-Defamation League, made itself absurd by warming to such figures as civil-rights activist Al Sharpton, who was accused of inciting violence against Jews during the Crown Heights riots of 1991. Other prominent progressives have reached out to the Black Lives Matter movement and the Women’s March – both firmly anti-Israel with close ties to the most influential anti-Semite of our time, Nation of Islam head Louis Farrakhan.

The Europeanisation of America’s Jews suggests that secular, diaspora progressive Judaism faces a tough future, while Israel has emerged for the first time in millennia as the dominant centre for Jewry. As political scientist Eric Kaufmann explains in his important book,Shall the Religious Inherit the Earth?, if current trends continue, the more fundamentalist family centred faiths seem most likely to survive. Already, for example, Orthodox Jews, historically a small sub-group, are projected to become the majority of the Hebraic community in Britain by 2100, and already account for some three fifths of Jewish children in New York.

In contrast, the demographic future of mainstream liberal Judaism is fraught. Those who identify most as Jews will move to the right, as has already happened in Britain. Trump made some modest gains among Jewish voters in 2020, although the bulk of American Jews, according to Pew, still identify with the Democratic Party. In contrast, some 70 per cent of American Orthodox Jews, who tend to be younger and have more children, identify as Republican. Jews of all kinds will remain in America. But, as one Israeli writer puts it, they, like their European counterparts, may morph into a ghetto of protected synagogues, hiding their yarmulkes and Jewish stars from sight.

The biggest winner from the decline of American Judaism may be Israel, the country leftists love to hate. Growing up as a Jewish kid in New York, Israel was seen as a place worthy of support, but hardly a match for America’s bounteous opportunities. Yet, today, the tiny Jewish state shines as a high-tech powerhouse. It looks stronger, militarily and economically, than at any time in its history.

If current trends hold, the Jewish future could become predominantly Israeli, much as French sociologist Georges Friedmann predicted over half a century ago in his book, The End of the Jewish People?. He foresaw the gradual fading of the diaspora and its replacement by ‘the Israeli nation’. With close to a majority of all Jewish children living there already, Israel, for the first time since early antiquity, will soon be home to a majority of all Jews.

Unless America’s Jewish establishment finds the chutzpah to push back against America’s increasingly powerful anti-Zionists, the Europeanisation of American Jewry will continue. And with it more and more Jews will shift from being members of a rich and diverse diaspora, to being citizens of a single nation state.