Biden’s exploitation of the Tulsa tragedy

The president used the anniversary of this vile racist massacre to score petty political points. 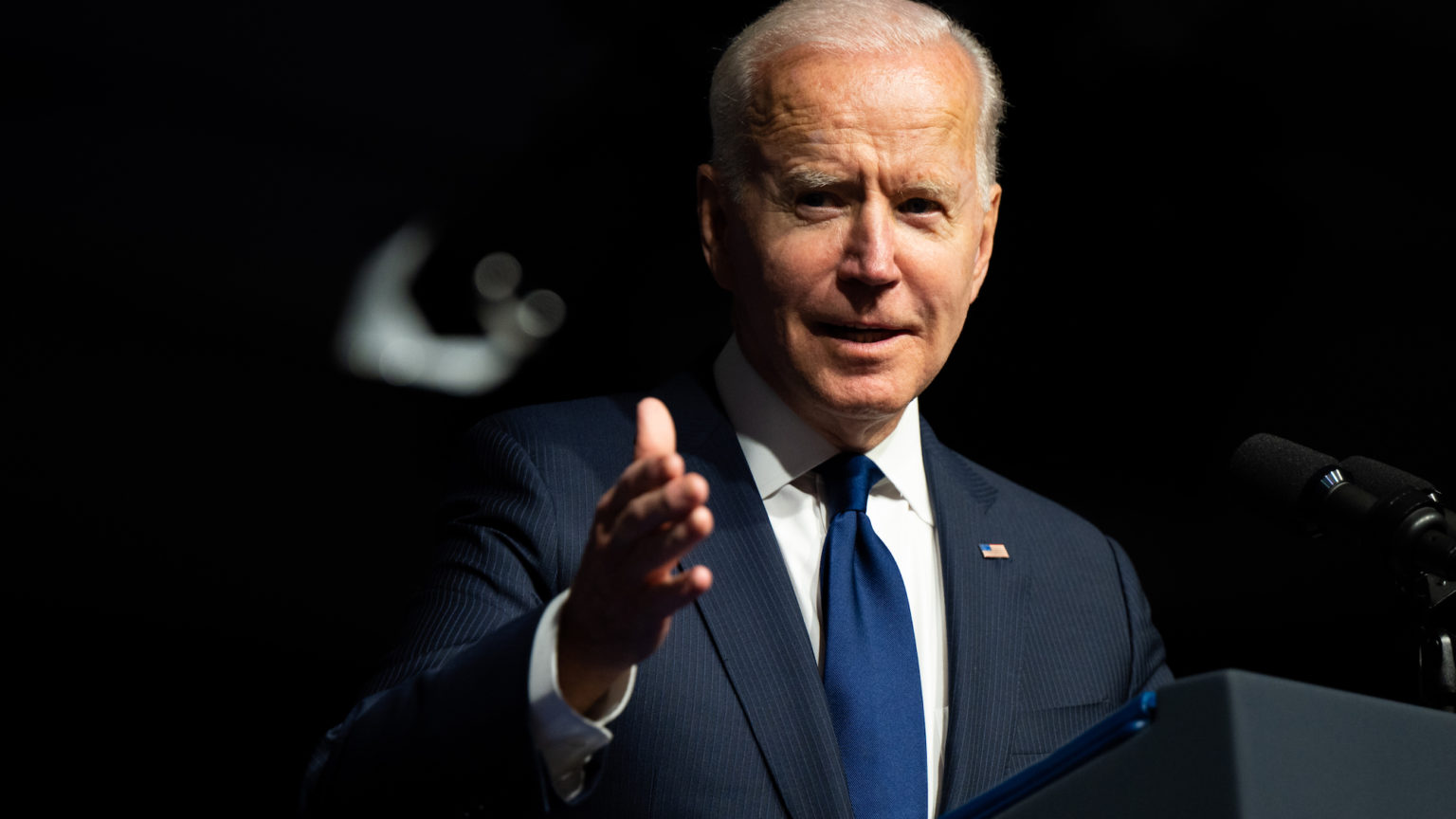 Earlier this week, Joe Biden visited Tulsa, Oklahoma to mark the 100th anniversary of the race massacre that devastated a black community. This massacre is not often recognised in American history, and it deserves proper commemoration. Unfortunately, Biden did not simply commemorate this tragedy. Instead, he used the occasion to make the false claim that the racism of Tulsa in 1921 is just as prevalent in the US in 2021, and to promote policies designed to ratchet up racial conflict.

The attack in Tulsa was a true atrocity, one of the worst in US history, even among many despicable racist massacres. It was triggered when a 19-year-old black man was arrested for the alleged sexual assault of a 17-year-old white woman in an elevator – a charge that was dubious. About 75 armed black men arrived to protect the arrested man from a white lynch mob, and a gun battle broke out. The white mob then went on the rampage through the thriving Greenwood District, known as Black Wall Street for its prosperous black businesses. Attackers set the district on fire – even dropping incendiary bombs from aeroplanes. By the end, the neighbourhood was in ruins, up to 300 black people were killed, and many of the black survivors were sent to internment centres. No one was prosecuted for these awful crimes.

Americans should remember and mark this racist violence. Tulsa should remind us of the wickedness of viewing society, and treating people differently, on the basis of race. It should serve as a warning that racial division risks terrible bloodshed. At the same time, we can also draw some hope from the fact that the Tulsa massacre is widely condemned today for the atrocity it was, and that the virulent racism that fed the white mob in 1921 is no longer tolerated.

But that’s not the type of commemoration Biden had in mind. He sought to leverage the occasion to push his administration’s propaganda about the supposedly severe threat of white supremacy in the US today. In drawing crude analogies between 1921 Tulsa and today, Biden ultimately cheapened the gravity of the Tulsa race massacre. He sought to harness the emotion of this memory to support his mundane political initiatives. Biden even inserted excerpts from a standard stump speech about his infrastructure bill into what should have been the remembrance of a terrible event.

Biden levelled partisan arguments against Republican voting bills in states like Georgia and Texas, referring to them as a ‘truly unprecedented assault on our democracy’. This ‘current assault’ was ‘not just an echo of a distant history’, he claimed. As it happens, Biden’s claim is misleading. These Republican bills, while introducing some restrictions (including the rollback of some pandemic-related changes), provide for more voter access than in Biden’s home state of Delaware. Reasonable people can disagree about the details and effects of the bills. But Biden’s historical analogies are completely illegitimate – whether he is calling the Georgia law ‘Jim Crow on steroids’ or likening the Texas law to racial violence. Such exaggerations inflame rather than enlighten.

Biden also used his Tulsa address to announce efforts to support minority-owned small businesses and home ownership among black people. As I noted last week on spiked, Biden’s ‘equity’ policies, which call for government money to be distributed on the basis of skin colour, are a recipe for racial conflict. There is a discussion to be had about economic development for working people, including the issue of wealth disparities among people of different races. But claiming, as Biden does, that the obstacles facing black people today are a continuation of the same ones they encountered in 1921 is just wrong.

We should be able to discuss and debate how the Black Wall Street emerged before the race massacre, how Tulsa was able to rebuild and restore a degree of black prosperity two decades later, and why segments of the black population in the city and others have experienced declining fortunes since. But according to Biden’s narrative, nothing has really changed since 1921.

Rather than viewing black people as potential agents of their economic future, Biden offered a patronising message that painted them as helpless. ‘Black entrepreneurs are just as capable of succeeding, given the chance, as white entrepreneurs are’, Biden said in Tulsa, ‘But they don’t have lawyers. They don’t have accountants.’ Someone should tell him that some black people are lawyers and accountants themselves.

Much worse than all of this was Biden’s attempt to raise the spectre of an ongoing white-supremacist movement – one that is allegedly just as bad as the rampaging white mob of 1921. ‘What happened in Greenwood was an act of hate and domestic terrorism with a through line that exists today still’, he said. ‘Terrorism from white supremacy is the most lethal threat to the homeland today. Not ISIS, not al-Qaeda – white supremacists.’

Biden is peddling a fictional tale. Neo-Nazis, the KKK and other racist groups are miniscule and do not represent a serious threat to the country. Where is Biden’s evidence of this threat? The fact that he has to cite, over and over again, the relatively small number of Charlottesville marchers from four years ago only highlights the absurdity of his claim. And are America’s white supremacists today really on a par with al-Qaeda, which killed 3,000 Americans on 9/11 alone? What about ISIS, which beheaded, gang-raped and ethnically cleansed its way across the Middle East? The comparisons are ridiculous.

A few days before Biden’s Tulsa address, his Department of Homeland Security issued a warning that domestic extremists may use violence on the 100th anniversary of the massacre. Of course, that did not happen – just like all the other warnings issued by the same department this year. Biden’s administration is clearly engaged in a fearmongering campaign that has sought to exploit the 6 January riot in the Capitol to his party’s advantage. Biden and the Democrats routinely refer to these rioters as ‘insurrectionists’ and ‘white supremacists’ without evidence. None has been charged with treason, sedition, insurrection or domestic terrorism. Biden is now leveraging the memory of Tulsa to wage a war on an enemy within.

The Tulsa race massacre has often been overlooked. That was wrong. It’s an important event in American history and it should be taught in schools. There should be no sugarcoating of the worst of America’s racist past, from slavery and Jim Crow to racial violence. ‘We should know the good, the bad, everything’, said Biden in Tulsa. He’s absolutely correct. The problem is that he and his coterie are promoting a narrative that is 100 per cent about the ‘bad’.

For instance, the Biden administration is heavily pushing a curriculum based on critical race theory and the New York Times’ 1619 Project into the nation’s schools – projects that convey the message that racism is endemic and remains ‘embedded’ in American society. This overly pessimistic view is far from ‘everything’ in history. It denies any sense of change or progress. It doesn’t help black working people today. It only serves woke evangelists in their petty power-grabs.

Barack Obama’s talks on race, including his 2008 campaign speech and his remarks following the Ferguson verdict, may not have been perfect. But at least he sought to provide a balanced reckoning. Compared with Biden, Obama appears like the second coming of MLK. Biden’s vulgar, ahistorical speech in Tulsa shows how far the Democrats’ views on race have degenerated since then. Rather than move us forward to a post-racial future, Biden and his party are trying to drag us back into the past.