The ugly truth about the Guardian

This liberal paper, celebrating its 200th birthday today, is a bastion of misanthropy, anti-democracy and imperialism. 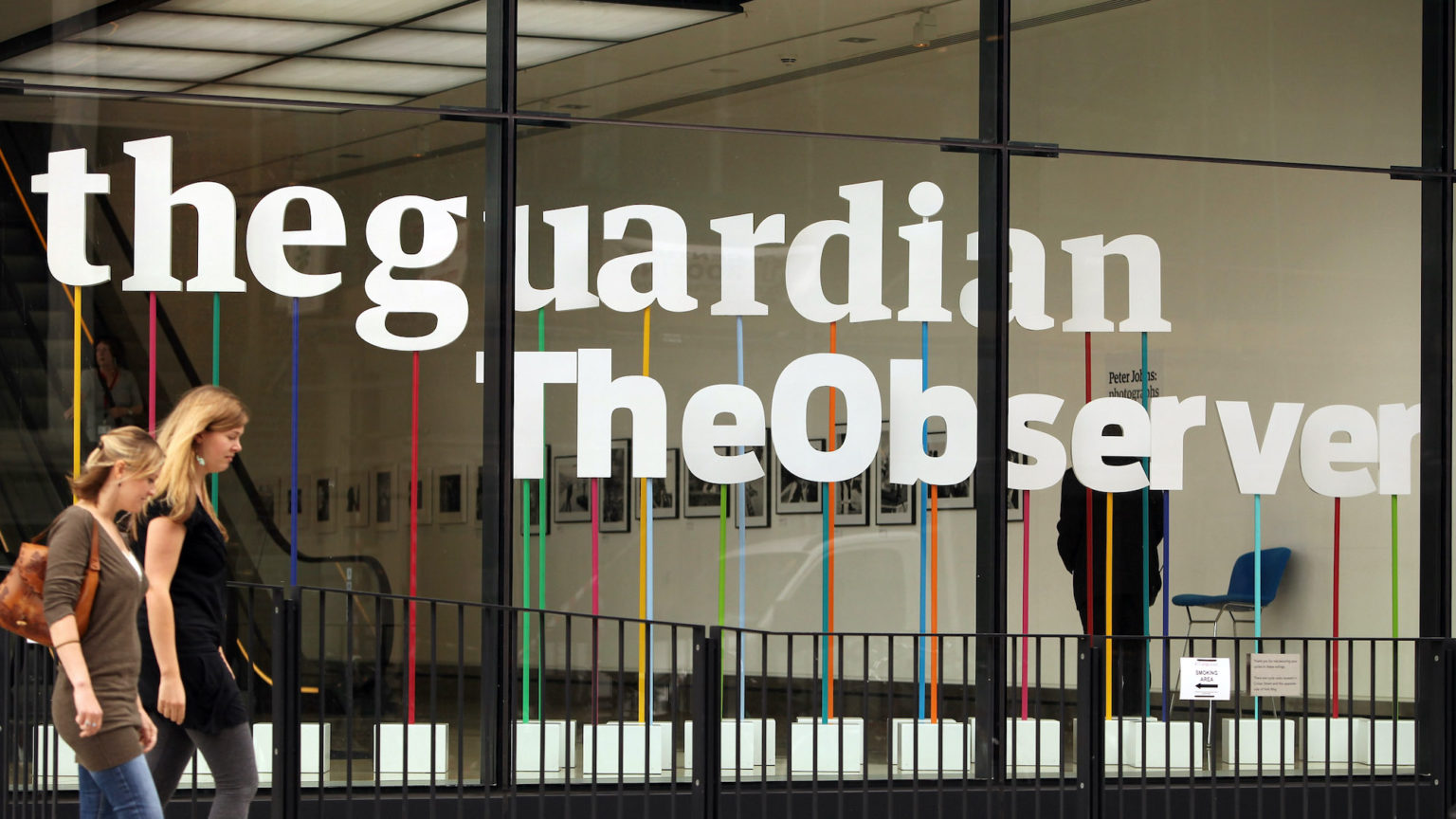 Guardian editor Katharine Viner celebrates the bicentennial of her paper today with claims that it is the newspaper of Britain’s liberal conscience. Nothing could be further from the truth.

The origin myth circulated from its King’s Place headquarters is that the Guardian began as a part of the democratic resurgence following the slaughter of suffrage protesters at St Peter’s Fields, in Manchester, in 1819. The Manchester Guardian did begin to take advantage of the changes wrought by what came to be known as the Peterloo Massacre, but not in the way that the current editor claims.

The founder and first editor of the Manchester Guardian, John Taylor, made his own view of the suffrage campaigners very clear when he wrote that they were exploiting foolish workers for their own selfish ends:

‘They have appealed not to the reason but the passions and the suffering of their abused and credulous fellow-countrymen, from whose ill-requited industry they extort for themselves the means of a plentiful and comfortable existence. “They do not toil, neither do they spin”, but they live better than those that do.’ (1)

Taylor took advantage of the disarray of the popular democratic movement after the massacre, and in particular the bankrupting of the Manchester Observer through police prosecutions. The Manchester Observer was described by a Home Office report as ‘the organ of the lower classes’ designed to ‘inflame their minds’, and it was this paper, not the Guardian, which coined the name ‘Peterloo’ to connect the St Peter’s Fields massacre to the killings at Waterloo (2). Taylor would never use the word ‘Peterloo’, thinking it was too inflammatory.

Seeing the opportunity to fill the gap in the market, Taylor set up a different kind of newspaper. Not one that pandered to the democratic movement, but rather one that promoted the ‘just principles of Political Economy’. The intended readership was ‘amongst the classes to whom, more especially, advertisements are generally addressed’. Such people would value ‘the commercial connections and knowledge of the conductors of the Guardian’. Eleven textile merchants raised the initial capital.

Thereafter the Manchester Guardian stood against popular democratic agitation, especially among the labouring classes. Shortly before the 1832 Reform Act that extended votes to the urban middle classes, the Manchester Guardian warned that reform must not go too far. John Taylor’s 1831 New Year’s message to readers warned that ‘hurried and extreme changes’ are ‘dangerous to the maintenance of public order’. ‘At present, there is a degree of excitement’ which ‘has evidently a revolutionary tendency’ but it is impossible that these changes ‘should ever be carried into effect without a civil war’. The Manchester Guardian wanted the vote extended to the towns (like Manchester) but ‘not so low as to give anything like a preponderating influence to the mere populace’. It warned that ‘the right of representation is not an inherent or abstract right, but the mere creation of an advanced condition of society. Its single object is to promote good government.’

When Lincoln was assassinated, in 1865, the Manchester Guardian wrote ‘of his rule, we can never speak except as a series of acts abhorrent to every true notion of constitutional right and human liberty’. What the Manchester Guardian found most abhorrent was the emancipation of the slaves. So outrageous was the paper’s promotion of Jefferson Davis’s slaveholders’ revolt that it was denounced in a mass rally of Union supporters in the nearby Free Trade Hall. The Guardian noted that ‘the chief occupation, if not the chief object of the meeting, seems to have been to abuse the Manchester Guardian’.

The Manchester Guardian’s hostility to popular democratic pressure was such that, even by the early 20th century, editor CP Scott denounced the Suffragette protesters: ‘The really ludicrous position is that Mr Lloyd George is fighting to enfranchise seven million women and the militants are smashing unoffending people’s windows and breaking up benevolent societies meetings in a desperate effort to prevent him.’ Scott thought the Suffragettes’ ‘courage and devotion’ was ‘worthy of a better cause and saner leadership’, and ‘to compare that with any great popular uprising of the past is too absurd a plea to require refutation’.

Scott was hostile, too, to the demands for independence in Ireland. When James Connolly and Patrick Pearse, heroes of Ireland’s Easter Rising in 1916, were executed, editor CP Scott wrote: ‘It is a fate which they invoked and of which they would probably not complain.’

Scott was also angered by the trade unions’ attempt to rally to the miners’ cause in the General Strike of 1926. An editorial explained the Manchester Guardian’s fears: ‘Will not the General Strike cease to be counted henceforth as a possible or legitimate weapon of industrial warfare? May not the very idea of treating industry as a theatre of warfare come to be regarded as barbaric?’

When it came to the paper’s international coverage, while it was in favour of liberal reform, it was still a pointed supporter of the British Empire. When Egyptian leader Gamal Abdel Nasser nationalised the Suez Canal in 1956, the Manchester Guardian was outraged: ‘It was a heavy day for the world when the canal that has for so long been an international interest passed under a violently nationalist government.’ ‘The [British] government is right to be prepared for military action at Suez’, the paper editorialised, because Egyptian control of the canal would be ‘commercially damaging for the West and perhaps part of a plan for creating a new Arab Empire based on the Nile’. Helpfully, the editor suggested that there might ‘be a way of reconciling Egypt’s interests with the rest of the world by creating a new international authority for supervising the canal without ownership’.

The Guardian’s hostility to Third World nationalists could be crass at times. In 1961, the popular Congolese president Patrice Lumumba was taken prisoner. ‘Lumumba is not blameless for the problems in the Congo’, lectured the Guardian, shortly after his corpse was allegedly mutilated.

Democracy campaigners in Northern Ireland might have hoped that the Guardian would be sympathetic to their cause. But when the British Army opened fire on civil-rights protesters on Bloody Sunday in Derry, in 1972, the Guardian blamed the protest leaders:

‘The organisers of the demonstration, Miss Bernadette Devlin among them, deliberately challenged the ban on marches. They knew that stone throwing and sniping could not be prevented, and that the IRA might use the crowd as a shield.’

The first inquiry into the massacre, under Lord Widgery, is today widely seen as a whitewash. But the Guardian defended him. ‘Lord Widgery’s report is not one-sided’, it led. Indeed, it questioned Widgery’s view that trouble could have been avoided if the army had kept a low-key attitude: ‘To ask anyone to keep a low-key attitude if persistently stoned is to ask superhuman behaviour.’ When the British Army introduced internment without trial in Northern Ireland, the Guardian backed the move, with some weasel words: ‘Internment without trial is hateful, repressive and undemocratic. In the existing Irish situation, most regrettably, it is also inevitable… To remove the ringleaders, in the hope that the atmosphere might calm down, is a step to which there is no obvious alternative.’

The Guardian’s instinctive identification with British imperialism abroad was given a new lease of life at the end of the Cold War, when the paper became the chief cheerleader for the new doctrine of ‘humanitarian intervention’.

In 1991, Britain and America argued for a multinational invasion of Iraq, based on wildly exaggerated tales of atrocities. The Guardian had no doubts about the rightness of the cause: ‘The simple cause, at the end, is just. An evil regime in Iraq instituted an evil and brutal invasion. Our soldiers and airmen are there, at UN behest, to set that evil right. Their duties are clear… let the momentum and the resolution be swift.’

The Guardian was excited by the conflict in Yugoslavia between Serb, Croat and Bosnian ethnic rivals. In it, the paper saw an outbreak of barbarism that demanded colonial occupation. When fighting broke out in Sarajevo in 1992, the Serbs were ‘bestial’. In a leader headed ‘The need to fight to make the peace’, the Guardian explained that the UN Security Council will ‘have to confront the need for force’.

Of course, force was just the beginning. We need an ‘open-ended occupation’, wrote Martin Woolacott – or a ‘benign colonial regime’, thought Julian Borger. In the later conflict in Kosovo, the Guardian again adopted a belligerent tone: ‘The only honorable course for Europe and America is to use military force.’ More bluntly, the sub-editors headlined an article by Mary Kaldor ‘Bombs away!’. The moral certainty in favour of NATO was mirrored by a similarly low opinion of the country that Western forces were fighting over – ‘a god-forsaken, dirt-poor, hate-ridden blot on the map of Europe’, was how Polly Toynbee described it.

When Britain and America pushed for a second invasion of Iraq to get rid of Saddam’s ‘Weapons of Mass Destruction’ (WMDs), a Guardian leader scoffed at Baghdad’s objections: ‘It is not credible to argue, as Iraq did in its initial reaction to Mr Powell [at the Security Council], that it is simply all lies… Iraq must disarm.’ As it turned out, Iraq had disarmed. After the conflict, no WMDs were found. It had been a pretext for war manufactured by the British secret services, with the help of the Guardian.

In recent times, the Guardian has been resolute in its view that democracy in Britain offers too great a risk of ‘populist’ capture and has consistently supported reforms intended to curtail it, whether demanding its subordination in the European Union or for greater oversight at the hands of the UK Supreme Court and other ‘non-majoritarian institutions’. That is wholly in keeping with its hostility to democratisation over its two centuries. The paper remains consistent, too, in its support for liberal imperialism – most recently supporting Western intervention in Libya and Syria.

Here’s to 200 years of the warmongering, reactionary and hate-filled Guardian.