Fear, loathing and the French police

Police are being targeted by Islamists – and by accusations of Islamophobia. 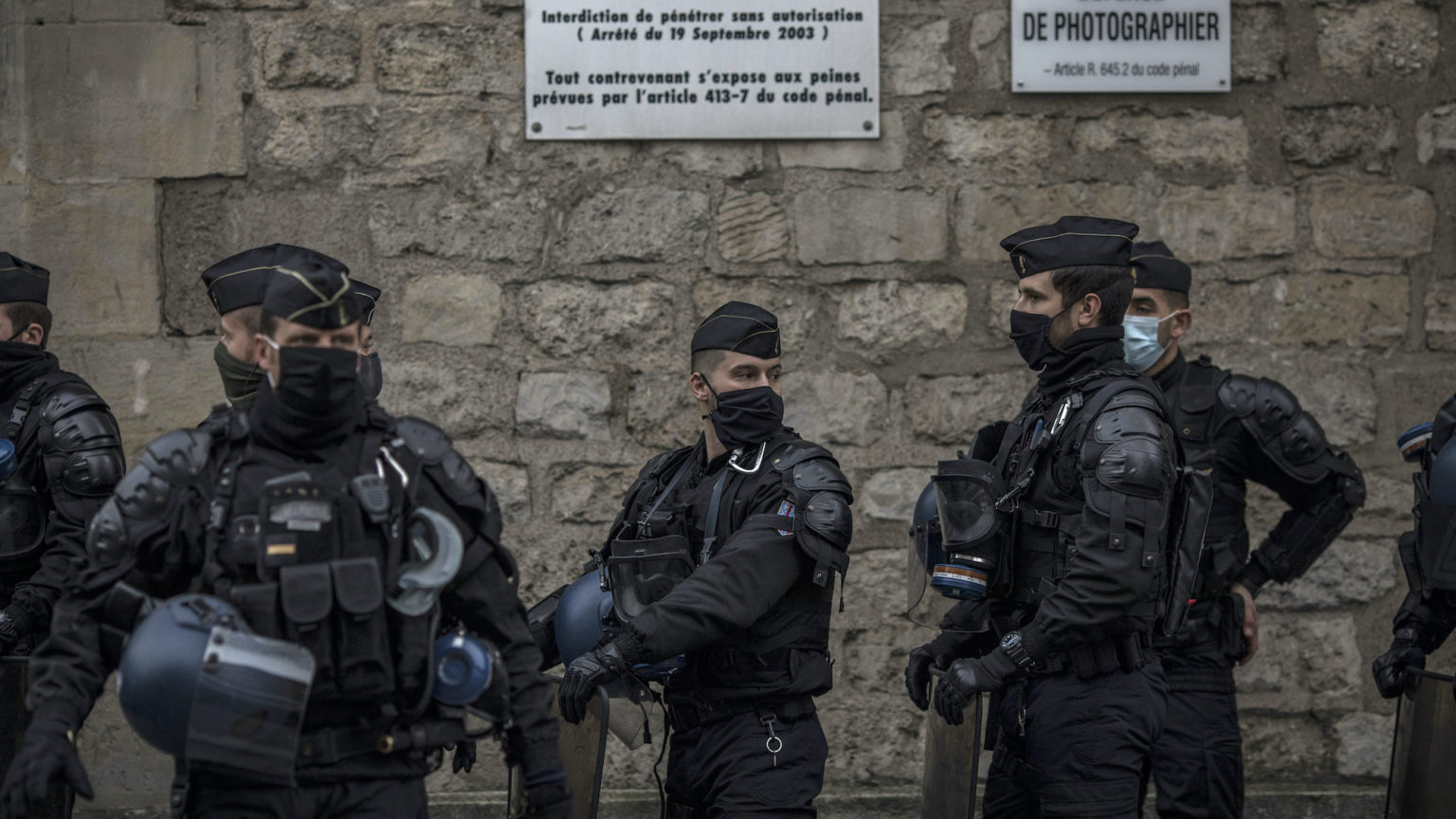 In the elegant commuter town of Rambouillet, south of Paris, last Friday, a Tunisian immigrant, identified as Jamel G, approached a uniformed, unarmed female police administrator from behind. She was returning to the police station after feeding the metre of her parked car. He trapped her in the entrance lobby, stabbed her in the abdomen and then sliced her throat, hollering ‘Allahu Akbar’. A policeman tried to unjam the door to stop him. When he was finally able to, he fired on the attacker after he refused to comply with an order to relinquish his weapon, killing him. For Stéphanie Monfermé, a mother of two, it was already too late. A tweet from President Macron, within hours, linked the attack to Islamist terrorism.

French police are fast becoming the target par excellence of Islamists. According to Middle East expert Bernard Rougier, jihadists consider the forces of law and order to be the incarnation of the infidel state seeking to destroy Islam. Since the Charlie Hebdo attacks in January 2015, 11 officers have died in Islamist attacks, including one on a police officer and his partner, who were murdered in front of their three-year old son. Other officers have escaped attacks with serious injuries.

It soon emerged that the alleged Rambouillet terrorist’s Facebook feed was filled with posts denouncing the police, accusing them of targeting Muslims in suburban areas. Some of these posts were from the left press and senior left-wing politicians.

The French police have had an image problem for some time. The high point was when grateful Parisians hugged officers during the ‘Je Suis Charlie’ demonstrations in 2015. The police are largely trusted by the vast majority of French citizens. While a noisy minority are justifiably outraged by the police violence visited on the gilets jaunes protesters – some of whom were blinded by military-grade weapons – it has also become more common to hear the police accused of being institutionally violent and of targeting citizens randomly in day-to-day policing.

Controversial deaths in police custody, such as that of Adama Traore, have led to accusations of officers systematically ‘massacring’ non-white residents of poor suburban areas. Unsurprisingly, these accusations have engendered a degree of public hostility towards ordinary officers that is unhealthy to a functioning society.

I will admit, I have been on demonstrations where I was attacked by French riot police – the infamous CRS. And I have interviewed immigrants who have been subjected to police harassment. So I am certainly not indifferent to the problems that exist for ordinary people in France when confronted by the forces of law and order. But something has gone very wrong when it has become impossible for local officers to patrol certain areas that are rife with drug-dealing and other criminal behaviour to the despair of law-abiding residents. Or when police are lured into traps by emergency calls before being set alight in their patrol cars.

Officers have started to grow tired of being portrayed as brutal, racist monsters. They have staged silent demonstrations, symbolically laying down their handcuffs on the street. Some officers have suggested that in order to avoid being accused of singling out people of colour for identity checks, they should not do any identity checks at all. A state whose police are quietly rebelling against their bosses in government is not a happy one with a bright future ahead.

Calls to protect police have culminated in a controversial bill, much covered in the international press, which seeks to censor images of police officers being circulated on social media. It is rightly seen as potentially lethal to press freedom and free speech. But the demand for it does not come entirely from a power-hungry repressive state wishing to silence its enemies. Many ordinary police officers are frightened for their own and their family’s safety, as they are increasingly targeted not just by terrorists, but by all shades of unhinged individuals and criminals with a grudge against them.

Islamists are the main beneficiaries of the increasingly mainstream view that the police are institutionally Islamophobic and violent towards Muslims. This climate makes it harder for ordinary citizens to back the forces of law and order when they have to do the tough, nasty job of rooting out terrorists.

Whether or not the French police have a problem with racism, or a tendency to overreach in their enforcement of the law, everyone needs to be very careful about making it easier for the criminally inclined to paint themselves as the real victims.

Richard Ings is a tutor and translator of French, and writer on French politics and society. Follow him on Twitter: @richardcings.