After the Floyd verdict: the US is not a racist dystopia

George Floyd’s killing united America in outrage. But some want to use it to keep us permanently divided. 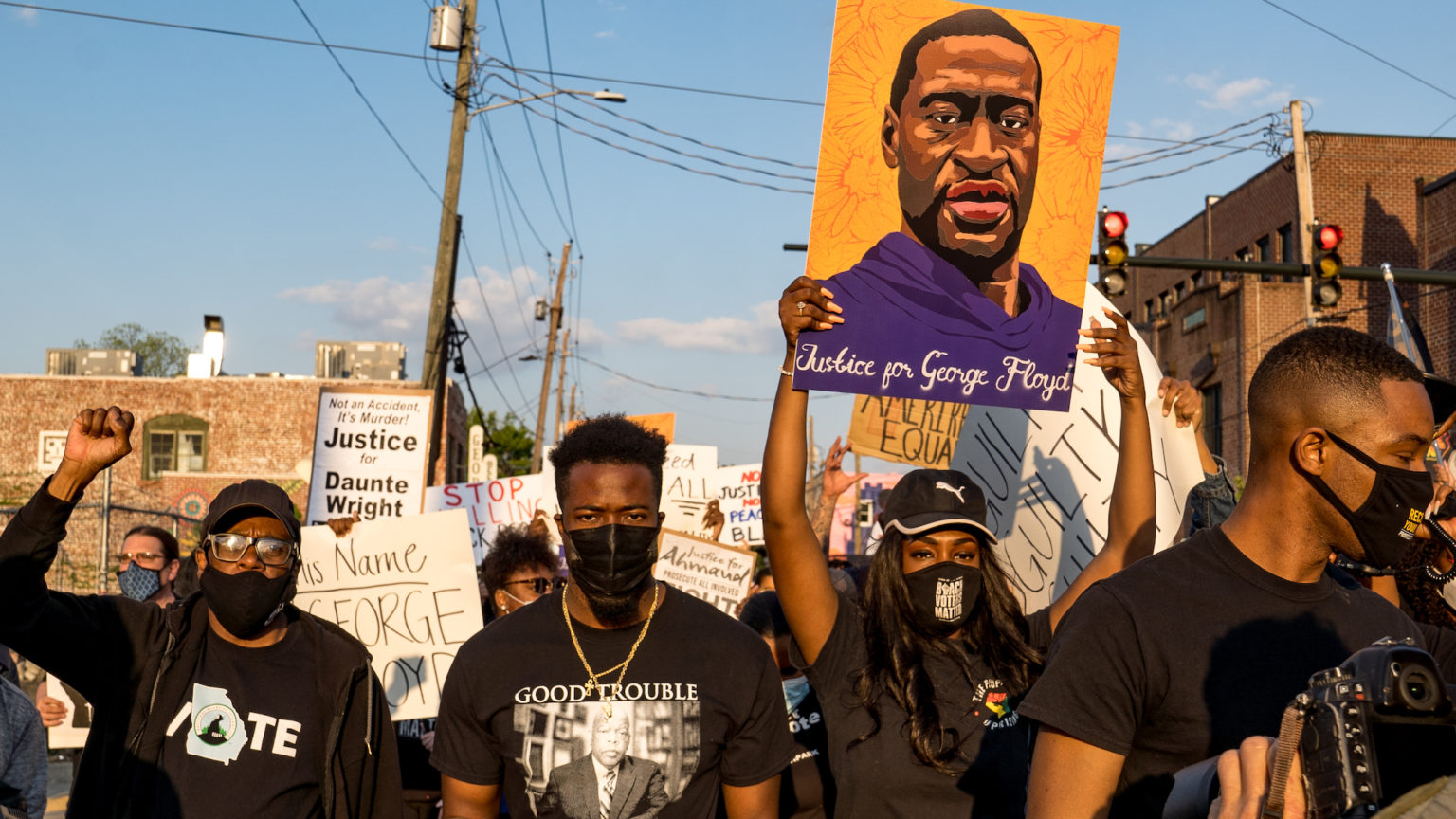 A jury has unanimously found police officer Derek Chauvin guilty of murder and manslaughter in the death of George Floyd. The verdict was delivered almost 11 months after a viral video showed Floyd gasping for breath under Chauvin’s knee, leading to widespread outrage in the US and across the world.

There is a palpable sense of relief here in the US following the verdict. In one sense, that relief is good and justifiable. But in another sense, the relief we feel is unhealthy and indicates that something has gone very awry in our political life.

People are right to be relieved that justice for Floyd was seen to be done. At the outset some expressed annoyance that a trial was necessary. As the ‘comedienne’ Chelsea Handler shared on Twitter: ‘So pathetic that there’s a trial to prove that Derek Chauvin killed George Floyd when there is video of him doing so.’ But principles like the presumption of innocence and due process are the bedrock of our legal system, and should not be jettisoned just because activists and celebrities think they know best.

Chauvin’s trial was televised, and those who watched with an open mind found a case that was more complex than the details shown in the almost 10-minute-long video of Chauvin kneeling on Floyd’s neck. Floyd’s heart disease and drug intake, for instance, weren’t known to us back then. Yet the case was also, at its core, simple – Chauvin used excessive force that killed Floyd. The length of time Chauvin held Floyd down, and his refusal to accept help from paramedics and others nearby, were particularly damning facts.

It is good to see Chauvin being held responsible for his awful crime, even if it won’t bring Floyd back. Some worried that a black man would not get justice from a jury that included six white people. Others feared that a police officer would get the benefit of the doubt. These concerns proved to be unwarranted, with Chauvin’s chief of police and sergeant testifying against him, and the jury system working as it should.

The verdict should increase confidence in the integrity of the justice system. It should make people question blanket statements that condemn the judicial system as inherently and always racist, and should lead to at least some acknowledgement that America has made progress on the issue of race. And it should encourage those who want to see reforms of how the police operate. That’s all positive.

But those are not the conclusions being reached by liberal politicians and Black Lives Matter activists. No, for those seeking to gain political advantage from Floyd’s death, the trial’s outcome only proves what they’ve asserted all along – that the US is a ‘systematically racist’ country.

It is this political context around the trial that means the verdict elicits a second type of relief – the unhealthy kind that we should not be proud of. That is the relief that comes from knowing that a guilty verdict on all three counts means we will not see rioting and arson in Minneapolis and other cities. The threat of widespread violence, repeating the kind of destruction witnessed across the country over the past year, hung heavily over this trial. It was a warning from the mob: we already know what the correct verdict is, and we’ll go on the warpath if you do not reach that verdict.

The threat of violence was evident from the start of Chauvin trial, and seriously risked corrupting the process. During jury selection, many potential jurors expressed fears that they could face attacks or other repercussions. Minneapolis city officials took the unusual step of announcing a $27million settlement with Floyd’s family before the trial, suggesting to jurors that they believed Chauvin was guilty and wouldn’t defend an acquittal.

Indeed, once selected, jurors came under tremendous pressure to reach a guilty verdict. Jurors entered a courthouse protected by the National Guard, with protests and violence on the surrounding streets. During the trial, police shot a young black man, Daunte Wright, in the nearby Brooklyn Center area, causing more public anger and more stress among jurors. A witness for the defence had his house attacked – signaling to jurors that they might be next. And Democratic Party representative Maxine Waters flew into Minneapolis to call on protesters to get ‘confrontational’ if Chauvin is acquitted – that is, to riot. The judge rightly criticised Waters, saying her intervention could lead to a mistrial on appeal (which could still happen, although it is probably unlikely).

But judges and juries should not have to conduct a trial amid an atmosphere of fear. And citizens should not have to go along with the idea that a mob can destroy cities if a jury’s verdict does not go the ‘right’ way. Indeed, it was striking in the run-up to the verdict how politicians and other authorities were quietly acquiescing to the possibility of rioting and violence. Buildings were boarded up in cities around the country, from Philadelphia to Los Angeles, with helicopters hovering overhead. No major figure denounced this possible violence. Instead, the message was: of course BLM and other protesters will burn things down if Chauvin is acquitted – that’s only right, we deserve it.

Back in June of last year, Minneapolis’ cowardly mayor, Jacob Frey, ordered police to vacate and allow protesters to burn down a precinct. In that same spirit, political leaders around the country today were demoralised and resigned to rioting. Apparently our elites don’t feel they have the moral authority to tell others not to riot (at least when it comes to race – they are strangely more robust when it comes to Trump supporters in the Capitol building). In this way, they greenlight the destruction of businesses, many of them minority-owned, effectively normalising it as a way of doing politics.

That is not a way to run a justice system or a society, and we shouldn’t feel good about the relief that comes when the threatened violence does not materialise. Because it could well do soon.

President Joe Biden could have used the opportunity of the trial’s verdict to stress the positives and racial unity that emerged amid the horrible killing of Floyd. After all, last June nearly all Americans, of all races, were appalled by what Chauvin did. Shortly after the video’s release, some 90 per cent of Americans believed Chauvin used excessive force, and two-thirds said it amounted to murder. And now today, the trial and verdict have shown that the justice system is not corrupted by racism. As a people, Americans rejected Chauvin and wanted to see him brought to justice.

Yet, in his remarks following the verdict, Biden struck a negative tone, emphasising the view, popular among Democrats and BLM, that Floyd’s death shows that the US remains thoroughly racist. Floyd’s murder ‘ripped the blinders off for the whole world to see… the systemic racism that is a stain our nation’s soul; the knee on the neck of justice for black Americans; the profound fear and trauma, the pain, the exhaustion that black and brown Americans experience every single day’.

Vice-president Kamala Harris, speaking before Biden, also stressed a never-ending racism: ‘America has a long history of systemic racism… So many Americans have now seen the racial injustice that black Americans have known for generations.’

But the conviction of Chauvin, while fair and just, did not prove what Biden, Harris and others assume: that the police, and US society more generally, are deeply racist. Yes, black people in America are racially disadvantaged. But what happened to Floyd was not typical – it was not something that blacks ‘experience every single day’. Such exaggerations by politicians and media have led to erroneous understandings of race and the police in the US, especially among the left: a recent survey found that 54 per cent of the ‘very liberal’ believe that 1,000 or more unarmed black people are killed annually by police. The number in 2019 was 27. With a total population of 44million, being shot by the police is not an everyday occurrence for black people in America.

Biden and Harris are seizing on the George Floyd case to push a narrative – that the US has been, for hundreds of years, a racist dystopian nightmare. For them, Chauvin and Floyd are not to be treated as individuals, but as symbols: Chauvin represents all whites as enduring oppressors, and Floyd represents all blacks as enduring victims. This is not only inaccurate, but divisive. Biden may say he desires ‘unity’, but many Americans will hear him effectively calling them racists – an accusation that will not be appreciated.

It is not helpful when Biden and Harris borrow critical race theory (CRT) jargon about the ‘long history of systemic racism’. Such talk avoids a close look at the actual history of race relations in America. In particular, it erases any sense of progress over the years. It is especially notable that CRT acolytes rarely mention Martin Luther King and the civil-rights movement, as that universalist movement is the antithesis of their vision of permanent racial divisions.

The truth is the US has made progress on race over the years – slowly, inconsistently, but eventually. It’s also true that there is still more ground to cover in order to become a more just society. The overwhelming, shared feeling of revulsion by nearly all Americans to George Floyd’s horrible death at the hands of Derek Chauvin should be grounds for stressing our common humanity, not an occasion to claim our racial differences are so deep as to be irredeemable.