The violent virtue-signalling of Western intervention

From Afghanistan to Libya, our puffed-up elites have caused chaos. 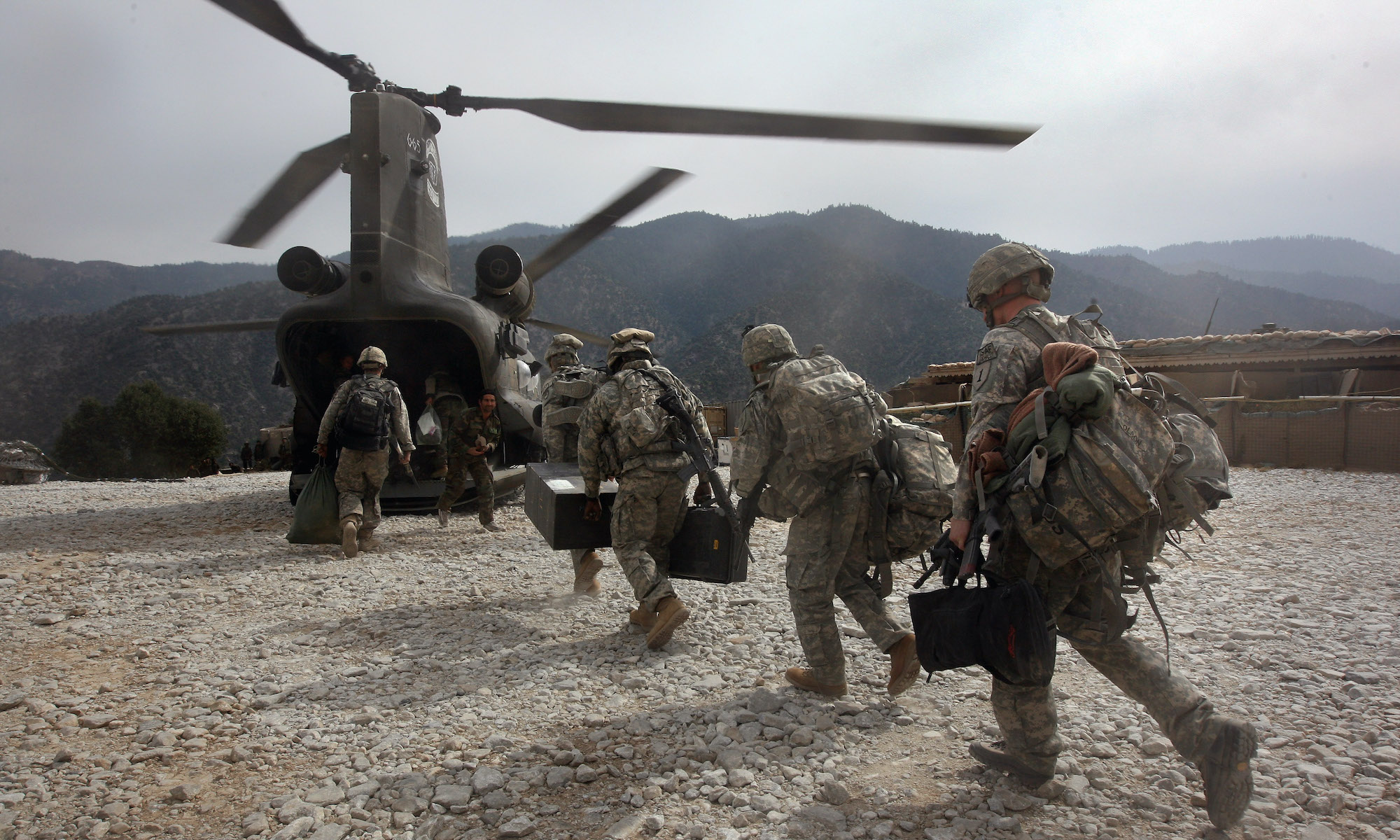 Democracy was going to be delivered to Libya, they said. The good guys would be propelled to power in Syria, they told us, ridding the world once and for all of the pox of Assadite authoritarianism. Afghanistan would take its place among the league of modern nations, they trilled, its backward, brutal culture of terrorism and misogyny being replaced by a shiny new nation free of the Talbian, the burqa and heroin. And Iraq? Iraq was going to be a post-Saddam paradise. Leftist laptop bombardiers assured us it would be a paragon of multiculturalism, with trade unionists to the fore. Others said it would just finally be a normal nation, a friend to the West. We can ‘cure the world’, as Tony Blair announced in 2001, perusing the globe from the dizzy perch of a new, virtuous imperialism.

And now? Over the past week alone the following things have happened. The US has ordered all non-essential staff to flee Chad after rebels poured over the border from the wartorn, ungovernable entity that Libya has been since we ‘liberated’ it from Gaddafi just over 10 years ago. Last week the BBC’s Middle East correspondent Quentin Somerville reported on the ‘chaos and depravity’ of Libya’s civil war. In September 2011, then British PM David Cameron had stood in Benghazi and promised to make Libya a free, democratic nation; it actually became a violently frayed country beset by sectarian conflict and Islamist barbarism.

This week war continued to rage in Syria, too. Yesterday Russia bombed a terrorist training camp just north of Palmyra. It claims it killed around 200 Islamist militants. In backing rebel forces in Syria, Hillary Clinton and her army of cheerleaders in the US and UK establishments assured us we would help to push aside Bashar al Assad and usher in a better, nicer form of governance. In truth, many of the so-called rebels turned out to be far worse than Assad, and these Islamist extremists were able to gain a foothold in vast swathes of Syria in which the West had helped to weaken Assadite rule. Some parts of Syria remain in an unpredictable, vacuum-like state following Washington’s witless backing of these nihilistic ‘rebels’, and this has in turn helped to bolster Russian and Iranian influence in the region: Assad has invited both nations to help restore his regime and secure Syria’s borders.

Last week in Iraq there was a drone attack on Irbil airport in the north and a rocket attack on a military compound in Bashiqa, also in the north, where Turkish troops are based. These two incidents may be relatively minuscule in the broader story of the horrors that have gripped Iraq since the Coalition’s toppling of Saddam in 2003, but they are significant because they speak to the growing tensions between Turkey and Iran. Both attacks are suspected to be the work of Iranian-backed militia that have been active and highly influential in Iraq for years now, both considered to be warning shots to the Turks. Post-war Iraq might have a Potemkin government in Baghdad, but almost 20 years after the defeat of Saddam much of the country remains a political void into which external actors are moving and plotting.

As for Afghanistan – last week the Taliban declared victory. Almost 20 years after US and UK forces invaded Afghanistan to smoke out al-Qaeda and punish the Taliban regime for providing it with a base, the Taliban says: ‘We have won the war, America has lost.’ This followed President Joe Biden’s announcement that America will withdraw its forces from Afghanistan, weirdly on 11 September. Taliban spokespeople gloated at this news. We are ‘totally prepared for peace, and fully prepared for jihad’, one declared. This is surely the most humiliating theatre of war for the Americans since Vietnam. The US spent 20 years trying to defeat or isolate the Taliban, and now it engages in a cowardly retreat while the Taliban mocks and threatens it. There is not nearly enough discussion of what a horrific folly the two-decades-long Afghan War has been.

Afghanistan captures perfectly, and terribly, what all of the above ventures have really been about. It was about Western powers desperately seeking a sense of purpose, trying to discover in the mountains and deserts of Afghanistan – or the towns and cities of Iraq, Libya and Syria – what they glaringly lacked at home: moral clarity and mission. Consider the ever-changing justification for the Afghan War. It was about punishing al-Qaeda for 9/11, we were first told. No, it was actually the first theatre in a broader ‘war on terror’, they then said. Actually, it was about regime change – the Taliban had to go, too. No, it was about liberating women from Islamist repression. In fact, it was a war on drugs – who can forget the farce of Blair sending his development minister Clare Short to oversee the destruction of Afghanistan’s poppy fields?

Afghanistan always lacked a clear casus belli. In fact, it was a new kind of war – a war in search of a casus belli, a war whose justification could be chopped and changed depending, not on the realities on the ground, but on the existential wants of the Western powers. It was a war driven less by the realpolitik of old than by the needs and neuroses of a Western political class bereft of purpose and still thrown by the strangeness and unpredictability of the post-Cold War world. The West was essentially at war with its own sense of moral and political exhaustion, and Afghanistan had the grave misfortune to be the theatre for it. America’s retreat from Afghanistan is an extraordinary humiliation for the neo-empire, but the truth is it should never have been there in the first place.

One of the most startling things about the disastrous wars of the past 20 years has been the refusal of their authors and supporters to take stock of their calamities. There has been barely any self-reflection or reckoning or responsibility-taking. Indeed, the people who rallied behind these assaults on sovereign nations, and assured us they would deliver freedom and democracy, remain part of public life, and seemingly shame-free. If you make a mess of a local public service in the UK, you will be expected to answer for it; but bring about the ruination of entire countries and there will be next to no political blowback. Strikingly, David Cameron is getting far more stick over some text messages he sent on behalf of a rich bloke with a crazy idea for the NHS than he ever did over his role in bringing about the ‘chaos and depravity’ in Libya.

This moral infantilism of the liberal warmonger, this refusal to take responsibility for what one unleashes overseas, itself speaks to how unanchored the new imperialism is. This is a system of war governed less by geopolitics or imperial design than by the narcissism of Western elites who crave a cause. It is violent virtue-signalling. This is why reckoning and responsibility – the normal stuff of political life – do not have to be countenanced. Because for all the grand talk of ‘nation-building’ and a ‘responsibility to protect’, in truth these ventures have the singular aim of providing disorientated elites with a temporary sense of moral drive. Once that has been achieved, the rest is just noise. Move on. It’s not our fault. We did our best.

In a democracy, we hold our political rulers to account. We need to ensure that this includes holding them to account for what they wreak elsewhere. As the Afghan chapter closes, for now, we should force a reckoning with the lethal narcissism of a Western political class that has destabilised the lives of millions of people in the Middle East, Central Asia and North Africa, and which then has the audacity to accuse us of being fickle, ‘post-truth’ and a threat to liberal norms. Barbarian, heal thyself.