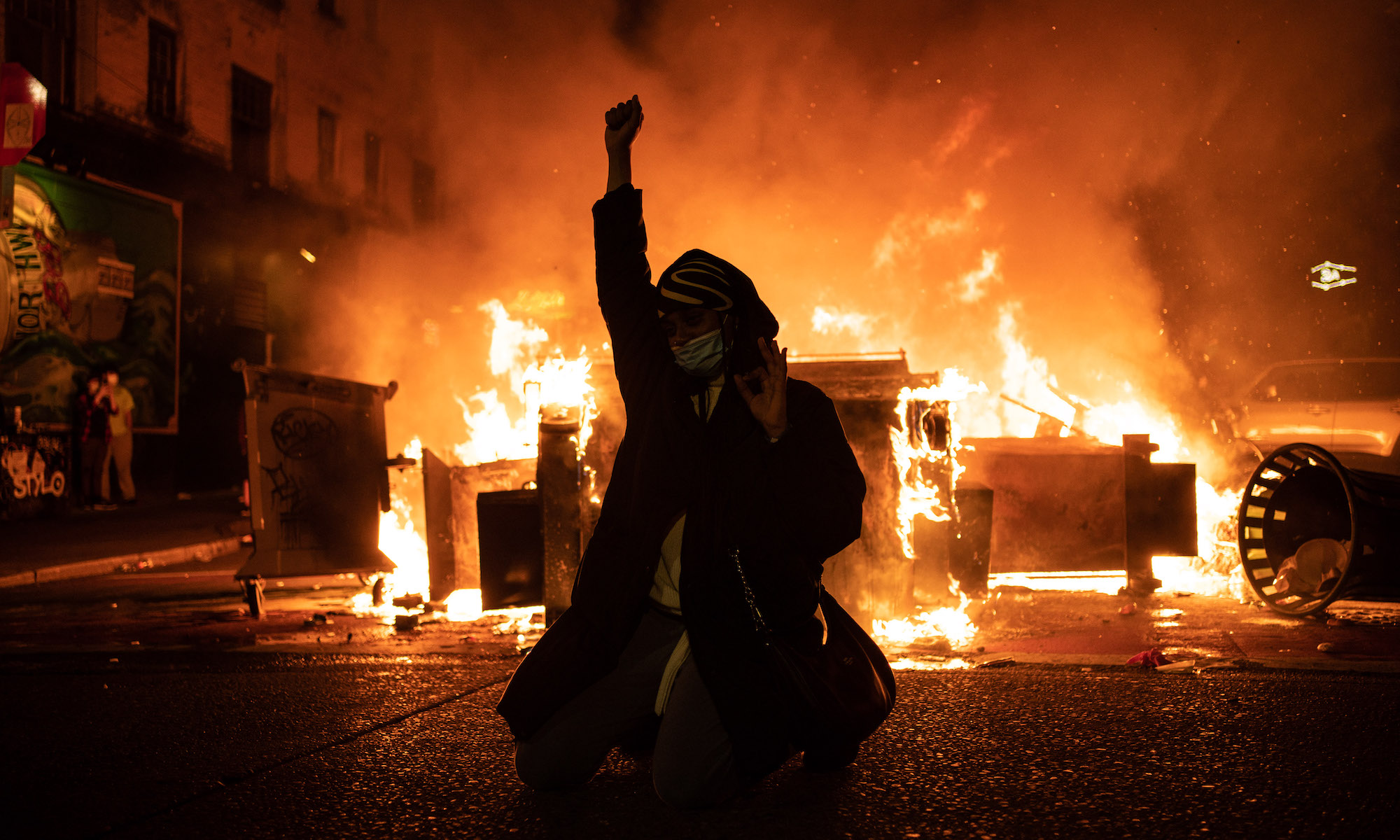 Jamil Ford still recalls the disorders of late May. ‘It was like Baghdad’, he recalls, even as jurors listen to the arguments during the trial of Derek Chauvin, the police officer accused of killing George Floyd. ‘I constantly think about it. The past history does not go away’, the African-American architect recalls, noting with trepidation possible National Guard deployments. ‘The mental part is still there.’

I know how he feels. In 1992 we went through this same process in Los Angeles when the police were exonerated in the beating of Rodney King. This unleashed a three-day explosion of often violent protests, resulting in $1 billion in damages and over 50 fatalities. In the end, the disorder led to some necessary shifts in police procedures but ultimately left the area relatively poorer and considerably less black than before.

Will things be different this time around? No politician in American history owes more to African-American leadership and voters than Joe Biden. His flailing campaign was rescued from the respirator by South Carolina’s heavily black Democratic electorate. African Americans sustained his path through states such as Texas. Since taking office, Biden’s commitment to battling the ‘sting of systemic racism’ and encroaching ‘white supremacy’ has accompanied his early actions and seems to have shaped many of his appointments.

The left’s and the media’s embrace of racial apocalypse, both in the US and in Britain, remains sadly selective. The recent Atlanta murders, given exhaustive coverage, appear to be the product not of Trumpista brownshirts but a singular, screwed-up madman. Meanwhile, attacks on Asians historically have come in large measure from minorities, largely African Americans. The most recent attack on Capitol Hill came not from Trumpistas but a follower of the ultimate anti-white, Louis Farrakhan.

The same media that hypes anti-Asian violence by whites usually ignores that by other ‘people of colour’. When the perpetrator is a Muslim jihadi, as was the case in Colorado, coverage has been less, even if the body count was twice as high. The ‘people of colour’ solidarity that bleeds over the pages of mainstream media has little room for nuance. It tends to ignore the fact that many Asians, and many Hispanics, oppose such things as quotas to selective high schools and colleges.

Similarly, most minorities seem not to share common ground with posturing politicians, and progressive intellectuals, who have excused looting as a form of racial redress. Minority business people generally don’t regard random violence as justice; the impact on business enterprises is felt particularly keenly in Minneapolis. A focus on police abuse is clearly needed, but the vast majority of Americans – including millennials and minorities – do not favour defunding law enforcement. They may be more concerned with the resurgence of violent and other crime in our core cities, even though it is often downplayed in the media.

The impending threat of violence in Minneapolis and elsewhere, offers manna from heaven for some but disaster for most. The racial-protest industry, perfected by the openly neo-Marxist Black Lives Matter, has raised a reported $90million, much of it from corporate largesse. What civil-rights activist Bob Woodson calls ‘race-grievance predators’ – like Ibrahim Kendi – are being bankrolled by oligarchs, like Twitter’s Jack Dorsey.

Thanks to the Floyd incident, diversity departments of corporations, universities and governments now have permission, indeed a mandate, to embrace open discrimination against whites and, when convenient, Asians as well. Companies like Coca-Cola now impose expensive racial ‘diversity training’ on their employees. Other businesses, like Uber Eats, have gifted free delivery for African-American-owned firms only, while Oakland has initiated a $500-a-month basic-income programme for poor people, funded by rich non-profits, but with the proviso that whites need not apply.

Racialism also holds short-term political benefits for Democratic politicians. Every Republican move now made – defending the Senate filibuster or challenges to electoral laws – has morphed into a ‘return to Jim Crow’. A discussion of controls, whether at the voting booth or the border, is immediately labelled as racist. Anyone suggesting otherwise risks being sent into the digital gulag by the dominant oligarchy.

The experience of the past 50 years shows, consistently, that civil disorders reduce investment in core cities, and lead companies to invest elsewhere. South Los Angeles is worse off, relative to the rest of the region, than in 1965. Research reveals riots have had this effect in much of the US. After last summer, many downtowns, notably Minneapolis and Portland, have suffered enormous setbacks in terms of business activity.

Businesses generally are loath to invest in places where violence lurks, and law enforcement seems unequal to the task of controlling it. One friend, himself a minority, had a medical warehouse in central Minneapolis that was burned down in the riots. He says the company has plans to rebuild – in suburban Atlanta or in Florida. ‘We can’t afford to destroy the economy’, warns Jamil Ford, who, with his church, tried to protect businesses last spring. ‘These are all the ones who can drive things after the fires happen.’

Already struggling with the pandemic, urban centres have been the hardest hit of America’s geographies in terms of employment losses. One recent survey found that today barely 10 per cent of corporate executives would consider investment in a big city; the vast majority are now opting for suburban and small-city locations.

In the coming days, we will hear repeatedly from Black Lives Matter and its media allies about police brutality and the need to assault remaining residues of dreaded ‘whiteness’ in our society. One black journalist, writing in Newsweek, warns about how African Americans will experience another bout of ‘trauma’ during the trial. Certainly they will cringe as the defence tries, as is its sad duty, to lessen or even eliminate charges against Chauvin.

This worry, given the past, is understandable, but legitimate concern over police abuse does not suggest minorities embrace the prevailing narrative. The vast majority of all races, noted a 2018 survey, reject the political correctness increasingly embraced by the billionaire class as well as corporate HR departments. Indeed, the most extreme people on racial issues are not Blacks and Hispanics but radicalised whites, whose Antifa shock troops well represent the lunatic fringe.

The woke may be winning in cyberspace and the corporate suite, but economic factors may prove more decisive in the long run. By 2032, minorities will constitute the majority of the American working class. They did better in terms of income under President Trump than previous administrations from both parties. This was one reason for the shocking move of Latin voters, devastated by the lockdowns, to Trump last year.

These populations are also voting with their feet and moving to red America. In a newly released report, the fastest growth in minority populations are occurring in the south, intermountain west and parts of the Great Plains. Demographer Wendell Cox also notes they are leaving the big progressive cities seeking lower house prices, more opportunities, and, yes, also lower taxes. As minorities move to these places, buy homes, and start businesses, they may tend to become more conservative in their values.

Red Guard-like seminars may make money for the practitioners of redress but it is what my friend Sergio Munoz calls ‘the multiculturalism of the streets’ that will save us. The idea of America as a kind of apartheid regime seems surreal in a country where one in 10 babies born in the US has one white and one non-white parent and 12 per cent of all African Americans are now immigrants from Africa, the Caribbean and elsewhere. Interracial marriage has gone from three per cent in 1967 to roughly one in six now.

It’s also time to ditch the West Side Story of repressed urban minorities. The suburbs, not the cities, now dominate the non-white experience in America. In the 50 largest US metropolitan areas, 44 per cent of residents live in racially and ethnically diverse suburbs, ranging from 20 to 60 per cent non-white. Even after the death of George Floyd and the subsequent unrest, most minorities still seek out ‘the American dream’, notes a recent study, but many lack the conviction that they can realise it.

These people, for the most part, are not seeking to create their own Bantustans or Barrios. They want a shot at making it in America, and we should do whatever works to ensure they get a chance.

Joel Kotkin is the Presidential Fellow in Urban Futures at Chapman University and executive director of the Urban Reform Institute. His latest book, The Coming of Neo-Feudalism, is now out from Encounter. You can follow him on Twitter @joelkotkin