We mustn’t lose the right to protest

Our freedom to dissent is in peril. It’s time to stand up. 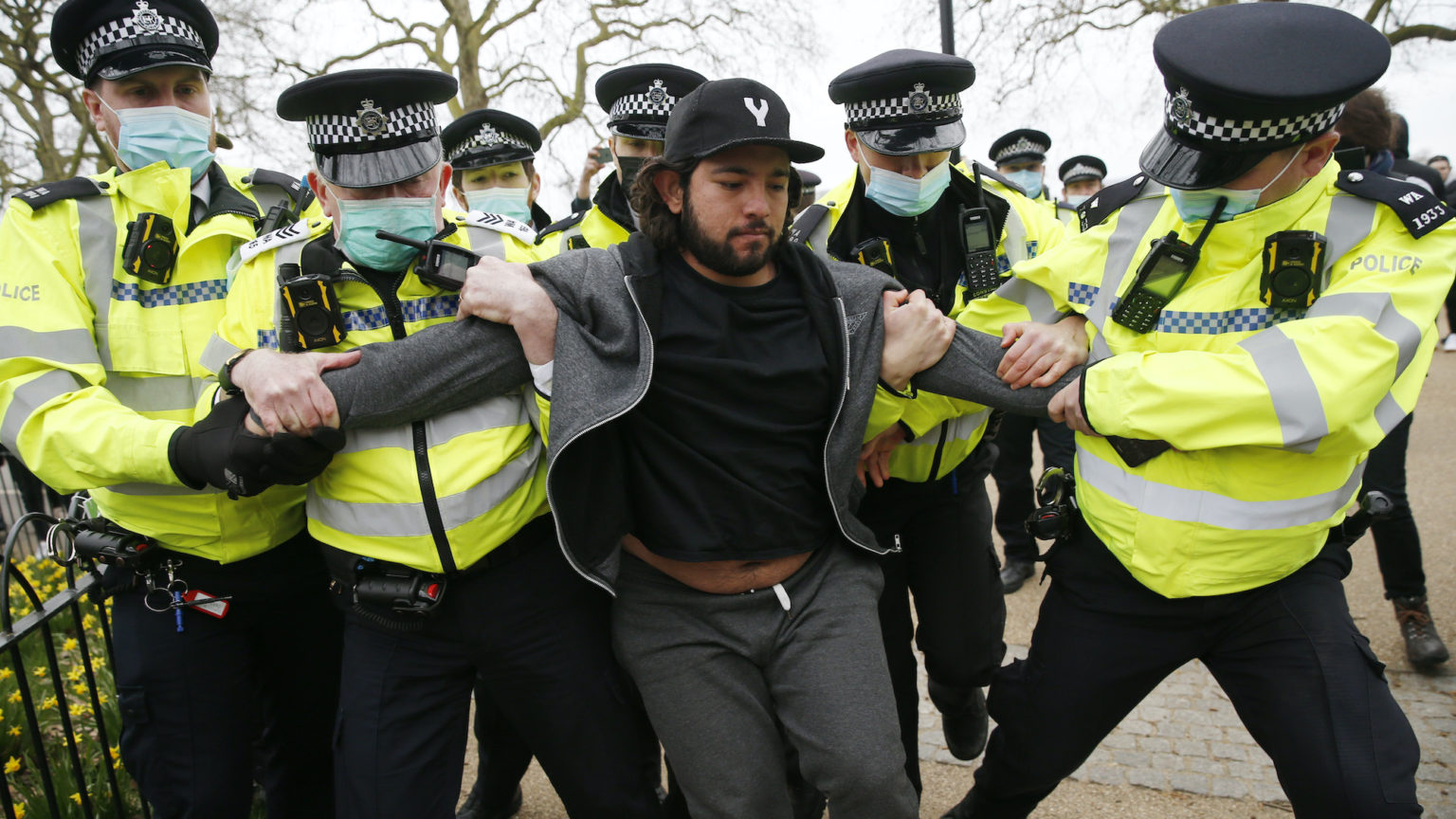 On 20 March 2021, hundreds of riot police, armed with batons, busted up a crowd of peaceful protesters who’d marched for four hours before concluding at Speakers’ Corner in Hyde Park. They felt they were living in a democracy and had the right to protest, but we’re living under Covid law so we don’t. The following day, 33 people died of coronavirus, and yesterday 17, so the idea that the right to demonstrate is prohibited due to a public-health emergency is rot. If the Police, Crime, Sentencing and Courts Bill is passed, that liberty will be stripped from us permanently.

The British have had the last word in Hyde Park since 1196, when those condemned to die at Tyburn Gallows were granted it before they were hanged. Marches and protests have long convened or terminated their routes at Speakers’ Corner itself. When a meeting of the Reform League, demanding an extension of the franchise, found the gates of the park locked, demonstrators tore up the railings to gain access and there was rioting for three days. By 1872, the government had given up trying to suppress British rights to this bit of London, passing the Parks Regulation Act which granted thinkers – from Marx to Orwell – the right to speak there. A right withdrawn only by Covid-19.

The only people who’ve fought back against this – almost unmentioned in the press – were 5,000 to 10,000 peaceful protesters who used the park as cover to conceal themselves on Saturday before assembling and setting out to march where the war memorial is marked with Pericles: ‘Freedom is the sure possession of those alone who have the courage to defend it.’

The Police, Crime, Sentencing and Courts Bill is ‘a mammoth piece of legislation’, in the words of the BBC. It will give the British police power to tackle ‘non-violent’ protest; introduce an offence of ‘intentionally or recklessly causing public nuisance’, which may include ‘serious annoyance, serious inconvenience or serious loss of amenity’; and will give the police powers to impose conditions on ‘static protests’ and ‘one-person demonstrations’.

One can only speculate on the conversations going on in the corridors of power from the interview with Professor Neil Ferguson that The Times published as a Christmas Day treat. ‘I think people’s sense of what is possible in terms of control changed dramatically between January and March’, Ferguson explained, regarding lockdown. ‘[China]’s a communist one-party state, we said. We couldn’t get away with it in Europe, we thought… and then Italy did it. And we realised we could.’

That was more than a year ago. The ‘sense of what is possible in terms of control’ now appears to have shifted so drastically that the prime minister is building a £9million White House-style ‘situation room’ beneath Whitehall for ‘national emergencies’. Am I the only one who fears that the national emergency he worries about is us one day discovering, en masse, what he has done to the economy? If so, I fear the poll-tax riots will strike him as a joke.

The first arrestee on Saturday, I am told, had turned up in a Hazmat suit, which obviously constituted the soon-to-be crime of ‘serious annoyance’ (to the police), since whoever it was clearly wasn’t taking any chances health-wise. I was late and struggling to catch up, so I witnessed the initially terrifying sight of just how many armed police were about to go and bust up the march, which then became a very merry sight when it became clear that all their whining vehicles, stuffed with officers in high vis, were whizzing round and round, defeated by their own road blocks and unable to find or get at anyone. The beauty and intelligence of those who planned this march were so wonderful I’m not going to mention details just in case the police learn anything.

At Temple, I caught the tailend of a tide of 5,000 to 10,000 people who were winding past police who were protecting Scotland Yard and other bastions of power from being marched past. Under Churchill’s statue, I spoke to a photographer who said the whole afternoon had been like a ‘game of kiss chase’ as every effort the police made to kettle and arrest en masse was frustrated. There were barely any arrests because most protesters didn’t talk to the police because anyone who did stop to explain that we aren’t living in Communist China got what was coming to them.

Covid-wise, it was hard to understand how up to six officers pinning a peaceful protester to a pavement on purpose would help matters. The police could have performed equally heroic feats of public service doing similar to anyone standing in a crowd queueing for takeout on the same day. If social distancing must be preserved, I’d like to suggest the police arrest each other because they were doing none of it.

The climactic clash on Speaker’s Corner was exactly like the battle of the Clapham Common bandstand last Saturday – save the police had helmets, shields and batons and the mass media weren’t there to take photographs and plaster them all over the newspapers.

Each Saturday the police seemed pissed off – the first time because the entire crowd was blaming them for the death of Sarah Everard, the second because they’d spent five hours being made to feel like idiots. They had three helicopters, territorial support and dogs, and wanted to have their fun. The commander of one police unit was making such a show of his baton I feared for his penis. But while I sympathise with anyone suffering erectile dysfunction, I don’t think the marchers sitting on the grass at Speakers’ Corner should have had to compensate for it. Families ran away citing fears for their babies. One girl who was wrestled to the ground was wearing a little pink bag with a rainbow on it. This clearly marked her out as requiring violent state suppression.

If the crime bill is voted through, armed officers tearing up a picnic – which is what it looked like, to my untrained eye – is what they’ll be able to do whenever they like, provided something has annoyed them.

We want our right to protest back, and we want it right now. Anyone who feels that nothing we do as human beings will make much difference in the world should go tell that to the ghosts at Speakers’ Corner. They may not have read their George Eliot but they embodied her words, and we must too. It is our duty to fight for the rights won for us in the past, to preserve them for the future: ‘For the growing good of the world is partly dependent on historic acts; and that things are not so ill with you and me as they might have been is half owing to the number who lived faithfully a hidden life, and rest in unvisited tombs.’