The attack on the vigil for Sarah was a disgrace

For centuries human beings have held vigils for victims of alleged murders. Now it’s a crime to do so. 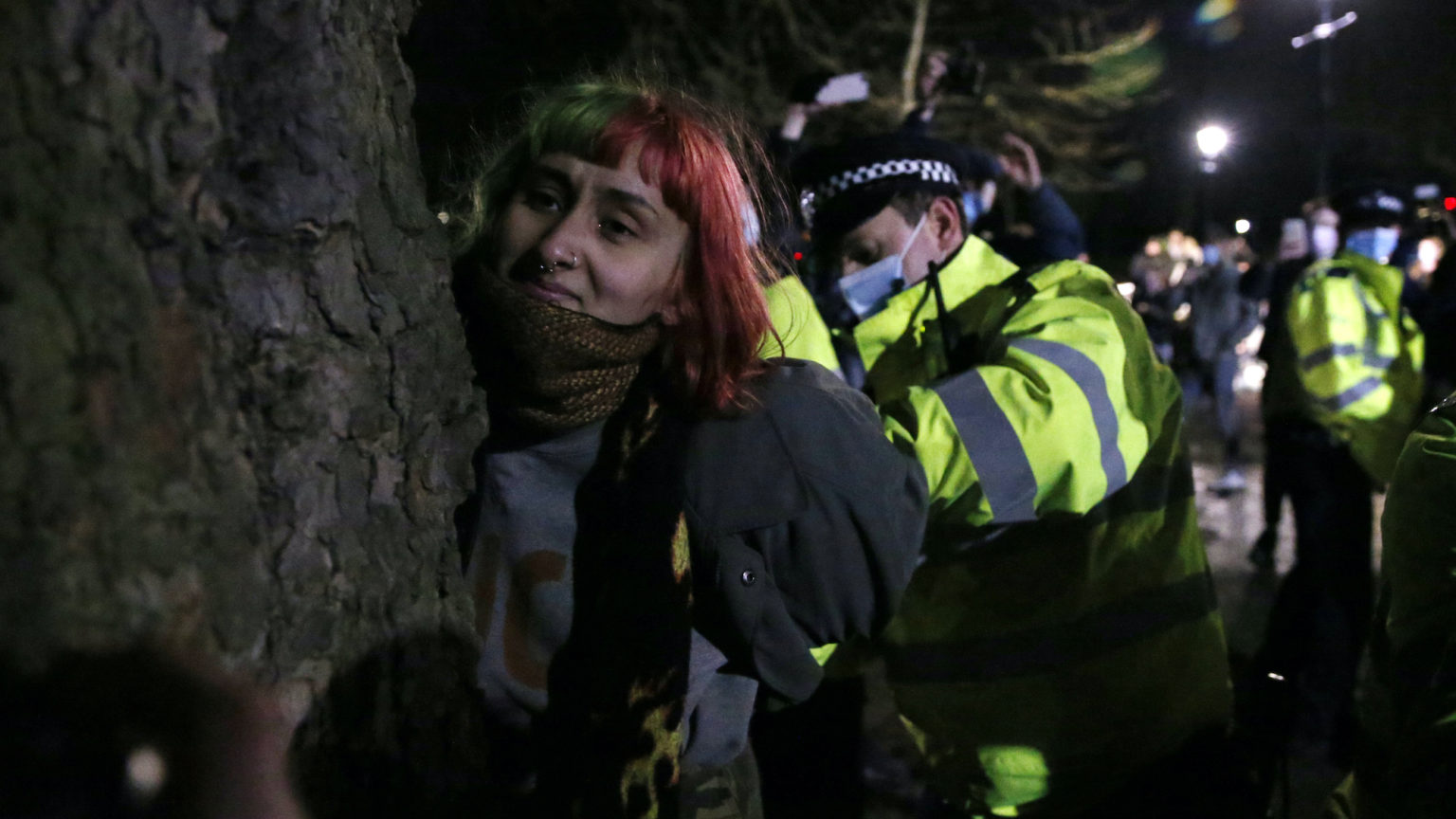 When human beings are murdered – brutally, evilly, inhumanly – human beings hold vigils. It’s one of the rights human beings have enjoyed for all the centuries before Covid came along and the government stripped us of many of our legal rights to behave like human beings. Holding a vigil should not be a political act. But that is what it has become in our democracy.

Sarah Everard was allegedly abducted from the part of London I have wandered about – mostly alone – for seven years. ‘There but for the grace of God go I’, is what I feel when I see the CCTV picture of her captured at the supermarket.

I do not understand why sex / gender intruded into the matter of holding a vigil for a human soul. But though Saturday night’s vigil was organised by an organisation called Reclaim the Streets, on Friday, not long after the body found in a builder’s bag was confirmed as Sarah’s (through the use of dental records), the vigil was declared illegal and the organisers cancelled it because they did not want to be held legally or financially responsible. They publicly requested that all those who wanted the streets to be reclaimed should donate money and shine a light on their doorstep at 9.30pm, rather than attend the vigil planned for 6pm on Saturday at Clapham Common bandstand.

At this point, my friend Nichi and I, who are forced to break the Covid law to see each other and have done so for months (just like Sarah, who was forced to break the Covid law to see her friend on the night she disappeared), became utterly and completely determined to go and lay our flowers, pay our private respects, and then report on what happened to the point of arrest. Speaking for myself, I do not fear men in Britain at all, but I do, very much, fear the British government and any member of the British police who is currently following orders. But neither of us wanted our fingerprints and DNA taken for the crime of doing something that should be legal, and we’re writers, so we have better ways of making a point.

We did ask several men – who are more physically powerful than us – to come and stand with us at the illegal vigil. That was Nichi’s idea, and I thought it an excellent one. When thousands of Rangers fans celebrated their title win this month, the Glaswegian police did next to nothing about it, one can only imagine because many of them were built like beauteous brick shithouses. It seemed perfectly obvious, in advance, that a park full of women built like Sarah Everard weren’t going to intimidate the London Metropolitan police.

(The one man I did recruit, also a journalist, admitted himself that he would ‘flunk a police physical’. But inside, our hearts all beat the same. And, to be honest, I am pretty disgusted by anyone who criticises the ‘tame’ males who turned out to an illegal vigil. That is not how any woman in the crowd on Saturday night after it turned ugly will have seen them – I assure you.)

My male friend and I walked from my home. It took a little longer than half an hour, and we saw all sorts of human beings with flowers – and dogs, and prams, and bicycles and all sorts of things – drift through Clapham. But veering off on a side street, we ran slap bang into a police van full of officers in hi-vis, which warned us what we were in for…

At a quarter to six, we were on the Common watching trickles of humans coming from every path leading to the bandstand and scattered all across the grass, standing still. In the bandstand, there was the beating of a drum; a helicopter was annoying in the sky, and the sun was setting on the horizon. Females vastly outnumbered males. But only three women seemed so unhappy with this that they left. But the Reclaim the Streets vigil had been cancelled. So it was illegal for every single one of us to be there.

It is impossible for us to verify our impression that police presence on the streets exacerbated the traffic, to the point that it reached a standstill and lots of people who wanted to be there for six were very late. All we know is that Nichi didn’t get to us until twenty to seven. By that point, I had laid my flowers and we were right in front of the bandstand trying to work out what was going on inside because it was impossible to hear from further out because the women inside had no loud hailers or speakers and were wearing face masks.

I have deliberately not researched the political affiliations of any of the women in the bandstand. If you’re interested, you’ll know already. All I want to report are the chants of the crowd in reaction to the women in the bandstand being dragged away by the police. At first, fresh supplies of women came up through the crowd and scaled the bandstand. But more and more police came until it became clear that the supply of women willing to be dragged off would run out long before the supply of police dragging them off did.

At ten past, we became acutely aware that the police had encircled everyone in the crowd around the bandstand and we feared they were going to pick us all off and arrest us. There was no social distancing going on and even though coronavirus infection rates in the area are incredibly low, that doesn’t seem to influence the predicament we’re in with the government and these were officers of the law.

So we got out before that happened, and then understood that the encirclement was a clever trick – which anyone practiced in the art of attending illegal vigils for an allegedly murdered woman would recognise – to frighten faint hearts out of the crowd. Outside of where we had been encircled the atmosphere was bloody awful. And frankly – considering that a firearms officer from Scotland Yard’s elite parliamentary and diplomatic protection command has been charged with the murder of the victim for whom the illegal vigil was being held – I’m surprised it was not a damned sight worse.

Maybe I wanted the vigil to be about the specific circumstances pertaining to the alleged abduction and murder of Sarah Everard and maybe it wasn’t. Maybe it was a political protest about other things. But I think all peaceful protests, of any variety, are essential to democracy. When I consult my own soul, after the fact, I’m not the slightest bit confused as to why I was there. And I am glad I was there, because it was unbelievable to witness, first hand, the Met bust up a crowd of human beings who were saying all sorts of things that I cannot repeat for legal reasons alongside very determined cries of ‘fuck the police’ as woman after woman was dragged away.

It was hard for me to see what was going on because – as should be clear to you by now – I’m a physical coward. However, braver women did suggest I had missed the vision of several police officers pin a woman against a tree. Cards were handed around to women who were putting themselves in danger of arrest – it’s true – and very possibly these were anti-lockdown conspirators. But as far as I could tell, these women weren’t radicals. They seemed to have been radicalised due to the context of being overpowered by police officers. I’m not sure what happened to ‘serve and protect’, but it would appear to be as dead as chivalry.

On Twitter, people appeared to worry that the vigil was corrupted by lockdown sceptics; lockdown sceptics are disgusted that anyone cares about women at a vigil when they didn’t care about women at an anti-lockdown protest. And to be honest, this whole spectacle of divide and rule so disgusts me that in dark moments I wish I was dead of Covid already. Lockdown brings out your suicidal streak, if you have one.

At half past seven, Nichi and I were questioned by the police as to what we were doing, told that we were in breach of coronavirus restrictions, and had to leave. We told them it appeared to us that if they stopped arresting women, everyone would leave voluntarily. It was freezing cold and when approached I was jogging on the spot. It seemed pretty clear we weren’t going to achieve anything by staying and our phones were almost out of battery. If that means the revolution had to die (as a male anti-lockdown campaigner sneered beneath one of my Instagram posts), so be it. You try getting home without a map on your phone when you’re disorientated because you’re not quite sure what path you need to take out of a park which – in parts – lies in total darkness.

I don’t think the murder of Sarah Everard has anything to do with me at all – save feeling a human impulse to empathise and worry with those who love her and who must be going through hell. Sarah Everard, her family tells us, was ‘bright and beautiful – a wonderful daughter and sister. She was kind and thoughtful, caring and dependable. She always put others first and had the most amazing sense of humour. She was strong and principled and a shining example to us all. We are very proud of her and she brought so much joy to our lives.’

I bet you my soul that a soul like that would have laid flowers. Neither Covid, nor politics of any other form, should have interfered with human beings holding a vigil to honour Sarah Everard and to give the slightest bit of comfort to those who will miss her for the rest of what remains to them of their time on earth.